NCERT Solutions for Class 7 History Chapter 9 – The Making of Regional Cultures (Social Science), contains solutions to various questions in Exercise for Chapter 9. At the end of the Solutions, all the keywords and Notes which are important to understand From The Making of Regional Cultures Class 7 History, have been explained in a simple and easy to understand manner. We are providing NCERT Solutions for Class 7 all subjects which can be accessed by clicking here. 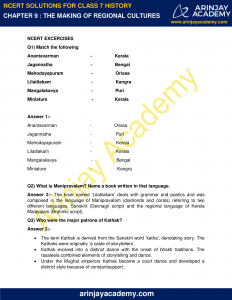 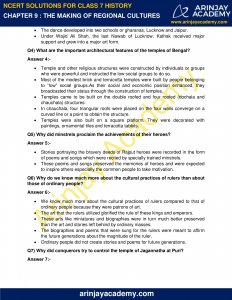 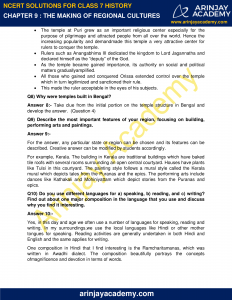 NCERT Solutions for Class 7 History Chapter 9 – The Making of Regional Cultures– Solutions to Question 11 and Question 12-Definition of Keywords-Classical, Miniature, Pir and Dialect. 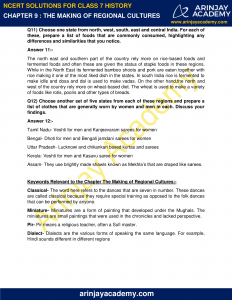 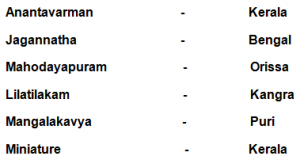 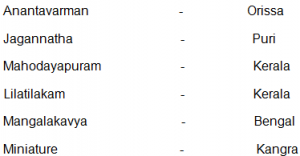 What is Manipravalam? Name a book written in that language.

The book named ‘Lilatilakam’ deals with grammar and poetics and was composed in the language of Manipravalam (diamonds and corals) referring to two different languages, Sanskrit (Devnagri script) and the regional language of Kerela Malayalam (Brahmic script).

Who were the major patrons of Kathak?

What are the important architectural features of the temples of Bengal?

Why did minstrels proclaim the achievements of their heroes?

Why do we know much more about the cultural practices of rulers than about those of ordinary people?

Why did conquerors try to control the temple of Jagannatha at Puri?

Why were temples built in Bengal?

Answer 8:- Take clue from the initial portion on the temple structure in Bengal and develop the answer.  (Question 4)

Describe the most important features of your region, focusing on building, performing arts and paintings.

For the answer, any particular state or region can be chosen and its features can be described. Creative answer can be modified by students accordingly.

For example, Kerala. The building in Kerala are traditional buildings which have baked tile roofs with several rooms surrounding an open central courtyard. Houses have plants like Tulsi in this courtyard. The painting style follows a mural style called the Kerala mural which depicts tales from the Puranas and the epics. The performing arts include dances like Kathakali and Mohiniyattam which depict stories from the Puranas and epics.

Do you use different languages for a) speaking, b) reading, and c) writing? Find out about one major composition in the language that you use and discuss why you find it interesting.

Yes, in this day and age we often use a number of languages for speaking, reading and writing. In my surroundings,we use the local languages like Hindi or other mother tongues for speaking. Reading activities are generally undertaken in both Hindi and English and the same applies for writing.

One composition in Hindi that I find interesting is the Ramcharitamanas, which was written in Awadhi dialect. The composition beautifully portrays the concepts ofmagnificence and devotion in terms of words.

Choose one state from north, west, south, east and central India. For each of these, prepare a list of foods that are commonly consumed, highlighting any differences and similarities that you notice.

The north east and southern part of the country rely more on rice-based foods and fermented foods and often these are given the status of staple foods in these regions. While in the North East its fermented bamboo shoots and pork are eaten together with rice making it one of the most liked dish in the states. In south India rice is fermented to make idlis and dosa and dal is used to make vadas. On the other hand,the north and west of the country rely more on wheat-based diet. The wheat is used to make a variety of foods like rotis, pooris and other types of breads.

Choose another set of five states from each of these regions and prepare a list of clothes that are generally worn by women and men in each. Discuss your findings.

Tamil Nadu- Veshti for men and Kanjeevaram sarees for women

Bengal- Dhoti for men and Bengali jamdani sarees for women

Uttar Pradesh- Lucknowi and chikankari based kurtas and sarees

Kerala- Veshti for men and Kasavu saree for women

Assam- They use brightly made shawls known as Mekhla’s that are draped like sarees.

Classical- The word here refers to the dances that are seven in number. These dances are called classical because they require special training as opposed to the folk dances that can be performed by anyone.

Miniature- Miniatures are a form of painting that developed under the Mughals. The miniatures are small paintings that were used in the chronicles and lacked perspective.

Dialect- Dialects are the various forms of speaking the same language. For example, Hindi sounds different in different regions