NCERT Solutions for Class 7 History Chapter 6 – Towns, Traders and Craftspersons (Social Science), contains solutions to various questions in Exercise for Chapter 6. At the end of the Solutions, all the keywords and Notes which are important to understand From Towns, Traders and Craftspersons Class 7 History, have been explained in a simple and easy to understand manner. We are providing NCERT Solutions for Class 7 all subjects which can be accessed by clicking here. 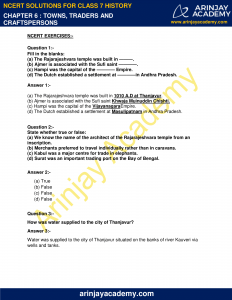 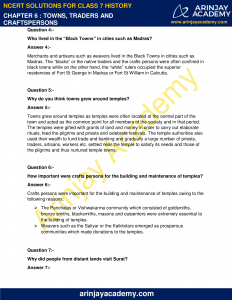 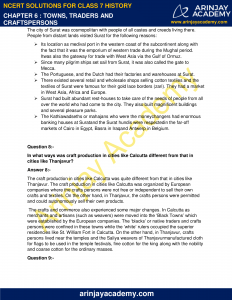 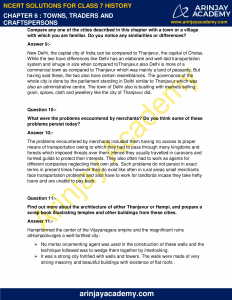 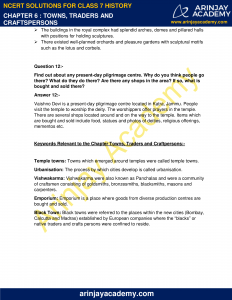 (a) The Rajarajeshvara temple was built in ____.

(d) The Dutch established a settlement at_____ in Andhra Pradesh.

(a) The Rajarajeshvara temple was built in 1010 A.D at Thanjavur.

(b) Ajmer is associated with the Sufi saint Khwaja Muinuddin Chishti.

(c) Hampi was the capital of the Vijayanagara Empire.

(d) The Dutch established a settlement at Masulipatnam in Andhra Pradesh.

(a) We know the name of the architect of the Rajarajeshvara temple from an inscription.

(b) Merchants preferred to travel individually rather than in caravans.

(c) Kabul was a major centre for trade in elephants.

(d) Surat was an important trading port on the Bay of Bengal.

How was water supplied to the city of Thanjavur?

Water was supplied to the city of Thanjavur situated on the banks of river Kauveri via wells and tanks.

Who lived in the “Black Towns” in cities such as Madras?

Merchants and artisans such as weavers lived in the Black Towns in citites such as Madras. The “blacks” or the native traders and the crafts persons were often confined in black towns while on the other hand, the “white” rulers occupied the superior residencies of Fort St George in Madras or Fort St William in Calcutta.

Why do you think towns grew around temples?

Towns grew around temples as temples were often located at the central part of the town and acted as the common point for all members of the society and in that period. The temples were gifted with grants of land and money in order to carry out elaborate rituals, feed the pilgrims and priests and celebrate festivals. The temple authorities also used their wealth to fund trade and banking and gradually a large number of priests, traders, artisans, workers etc. settled near the temple to satisfy its needs and those of the pilgrims and thus nurtured temple towns.

How important were crafts persons for the building and maintenance of temples?

Crafts persons were important for the building and maintenance of temples owing to the following reasons:

Why did people from distant lands visit Surat?

The city of Surat was cosmopolitan with people of all castes and creeds living there. People from distant lands visited Surat for the following reasons:

The crafts and commerce also experienced some major changes. In Calcutta as merchants and artisans (such as weavers) were moved into the ‘Black Towns’ which were established by the European companies. The ‘blacks’ or native traders and crafts persons were confined in these towns while the ‘white’ rulers occupied the superior residencies like St. William Fort in Calcutta. On the other hand, in Thanjavur, crafts persons lived near the temples and the Saliya weavers of Thanjavur manufactured cloth for flags to be used in the temple festivals, fine cotton for the king along with the nobility and coarse cotton for the ordinary masses.

Compare any one of the cities described in this chapter with a town or a village with which you are familiar. Do you notice any similarities or differences?

New Delhi, the capital city of India can be compared to Thanjavur, the capital of Cholas. While the two have differences like Delhi has an elaborate and well-laid transportation system and ishuge in size when compared toThanjavur,also Delhi is more of a commercial town as compared to Thanjavur which was mainly a land of peasants. But having said these, the two also have certain resemblances. The governance of the whole city is done by the parliament standing in Delhi similar to Thanjavur which was also an administrative centre. The town of Delhi also is bustling with markets selling grain, spices, cloth and jewellery like the city of Thanjavur did.

What were the problems encountered by merchants? Do you think some of these problems persist today?

The problems encountered by merchants included them having no access to proper means of transportation owing to which they had to pass through many kingdoms and forests which imposed threats over them. Hence they usually travelled in caravans and formed guilds to protect their interests. They also often had to work as agents for different companies neglecting their own jobs. Such problems do not persist in exact terms in present times however they do exist like often in rural areas small merchants face transportation problems and also have to work for landlords incase they take hefty loans and are unable to pay back.

Find out more about the architecture of either Thanjavur or Hampi, and prepare a scrap book illustrating temples and other buildings from these cities.

Hampi formed the center of the Vijayanagara empire and the magnificent ruins atHampidivulges a well-fortified city:

Find out about any present-day pilgrimage centre. Why do you think people go there? What do they do there? Are there any shops in the area? If so, what is bought and sold there?

Vaishno Devi is a present-day pilgrimage centre located in Katra, Jammu. People visit the temple to worship the deity. The worshippers offer prayers in the temple. There are several shops located around and on the way to the temple. Items which are bought and sold include food, statues and photos of deities, religious offerings, mementos etc.

Urbanisation: The process by which cities develop is called urbanisation.

Vishwakarma: Vishwakarma were also known as Panchalas and were a community of craftsmen consisting of goldsmiths, bronze smiths, blacksmiths, masons and carpenters.

Emporium: Emporium is a place where goods from diverse production centres are bought and sold.

Black Town: Black towns were referred to the places within the new cities (Bombay, Calcutta and Madras) established by European companies where the “blacks” or native traders and crafts persons were confined to reside.