NCERT Solutions for Class 7 History Chapter 7 – Tribes, Nomads and Settled Communities (Social Science), contains solutions to various questions in Exercise for Chapter 7. At the end of the Solutions, all the keywords and Notes which are important to understand From Tribes, Nomads and Settled Communities Class 7 History, have been explained in a simple and easy to understand manner. We are providing NCERT Solutions for Class 7 all subjects which can be accessed by clicking here. 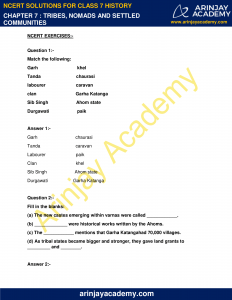 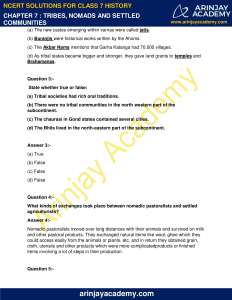 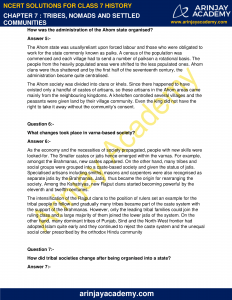 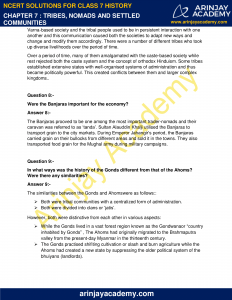 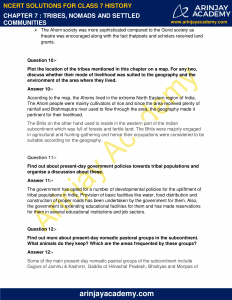 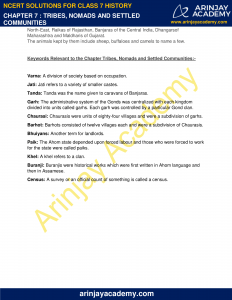 NCERT Solutions for Class 7 History Chapter 7 – Tribes, Nomads and Settled Communities Exercises includes – Match the following, Fill in the Blanks and Question/Answers which helps you to understand the topic covered in Tribes, Nomads and Settled Communities Class 7 History (Social Science), in a better manner to help you to score good marks in your examinations. 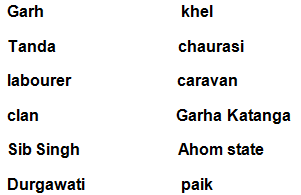 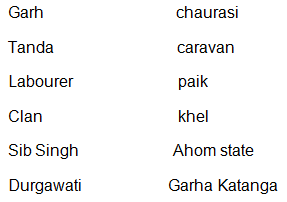 (a) The new castes emerging within varnas were called jatis.

(b) Buranjis were historical works written by the Ahoms.

(c) The Akbar Nama mentions that Garha Katanga had 70,000 villages.

(d) As tribal states became bigger and stronger, they gave land grants to temples and Brahamanas.

(b) There were no tribal communities in the north western part of the subcontinent.

(d) The Bhils lived in the north-eastern part of the subcontinent.

What kinds of exchanges took place between nomadic pastoralists and settled agriculturists?

Nomadic pastoralists moved over long distances with their animals and survived on milk and other pastoral products. They exchanged natural items like wool, ghee which they could access easily from the animals or plants, etc. and in return they obtained grain, cloth, utensils and other products which were more complicatedproducts or finished items involving a lot of steps in their production.

How was the administration of the Ahom state organised?

The Ahom state was usually reliant upon forced labour and those who were obligated to work for the state commonly known as paiks. A census of the population was commenced and each village had to send a number of paikson a rotational basis. The people from the heavily populated areas were shifted to the less populated ones. Ahom clans were thus shattered and by the first half of the seventeenth century, the administration became quite centralised.

The Ahom society was divided into clans or khels. Since there happened to have existed only a handful of castes of artisans, so these artisans in the Ahom areas came mainly from the neighbouring kingdoms. A kheloften controlled several villages and the peasants were given land by their village community. Even the king did not have the right to take it away without the community’s consent.

As the economy and the necessities of society propagated, people with new skills were looked-for. The Smaller castes or jatis hence emerged within the varnas. For example, amongst the Brahmanas, new castes appeared. On the other hand, many tribes and social groups were grouped into a caste-based society and given the status of jatis. Specialised artisans including smiths, masons and carpenters were also recognised as separate jatis by the Brahmanas. Jatis,  thus became the origin for rearranging the society. Among the Kshatriyas, new Rajput clans started becoming powerful by the eleventh and twelfth centuries.

The intensification of the Rajput clans to the position of rulers set an example for the tribal people to follow and gradually many tribes became part of the caste system with the support of the Brahmanas. However, only the leading tribal families could join the ruling class and a large majority of them joined the lower jatis of the system. On the other hand, many dominant tribes of Punjab, Sind and the North-West frontier had adopted Islam quite early and they continued to reject the caste system and the unequal social order prescribed by the orthodox Hindu community

How did tribal societies change after being organised into a state?

Varna-based society and the tribal people used to be in persistent interaction with one another and this communication caused both the societies to adapt new ways and change and modify them accordingly. There were a number of different tribes who took up diverse livelihoods over the period of time.

Over a period of time, many of them amalgamated with the caste-based society while rest rejected both the caste system and the concept of orthodox Hinduism. Some tribes established extensive states with well-organised systems of administration and thus became politically powerful. This created conflicts between them and larger complex kingdoms..

Were the Banjaras important for the economy?

The Banjaras prooved to be one among the most important trader-nomads and their caravan was referred to as ‘tanda’. Sultan Alauddin Khalji utilised the Banjaras to transport grain to the city markets. During Emperor Jahangir’s period, the Banjaras carried grain on their bullocks from different areas and sold it in the towns. They also transported food grain for the Mughal army during military campaigns.

In what ways was the history of the Gonds different from that of the Ahoms? Were there any similarities?

The similarities between the Gonds and Ahoms were as follows::

However, both were distinctive from each other in various aspects:

Plot the location of the tribes mentioned in this chapter on a map. For any two, discuss whether their mode of livelihood was suited to the geography and the environment of the area where they lived.

According to the map, the Ahoms lived in the extreme North Eastern region of India. The Ahom people were mainly cultivators of rice and since the area received plenty of rainfall and Brahmaputra river used to flow through the area, the geography made it pertinent for their livelihood.

The Bhils on the other hand used to reside in the western part of the Indian subcontinent which was full of forests and fertile land. The Bhils were majorly engaged in agricultural and hunting-gathering and hence their occupations were considered to be suitable according tor the geography.

Find out about present-day government policies towards tribal populations and organise a discussion about these.

Find out more about present-day nomadic pastoral groups in the subcontinent. What animals do they keep? Which are the areas frequented by these groups?

Some of the main present-day nomadic pastral groups of the subcontinent include Gujjars of Jammu & Kashmir, Gaddis of Himachal Pradesh, Bhiotiyas and Monpas of North-East, Raikas of Rajasthan, Banjaras of the Central India, Dhangarsof Maharashtra and Maldharis of Gujarat.
The animals kept by them include sheep, buffaloes and camels to name a few.

Varna: A division of society based on occupation.

Jati: Jati refers to a variety of smaller castes.

Tanda: Tanda was the name given to caravans of Banjaras.

Garh: The administrative system of the Gonds was centralized with each kingdom divided into units called garhs. Each garh was controlled by a particular Gond clan.

Chaurasi: Chaurasis were units of eighty-four villages and were a subdivision of garhs.

Bhuiyans: Another term for landlords.

Paik: The Ahom state depended upon forced labour and those who were forced to work for the state were called paiks.

Khel: A khel refers to a clan.

Buranji: Buranjis were historical works which were first written in Ahom language and then in Assamese.

Census: A survey or an official count of something is called a census.