NCERT Solutions for Class 7 History Chapter 8 – Devotional Paths to the Divine (Social Science), contains solutions to various questions in Exercise for Chapter 8. At the end of the Solutions, all the keywords and Notes which are important to understand From Devotional Paths to the Divine Class 7 History, have been explained in a simple and easy to understand manner. We are providing NCERT Solutions for Class 7 all subjects which can be accessed by clicking here. 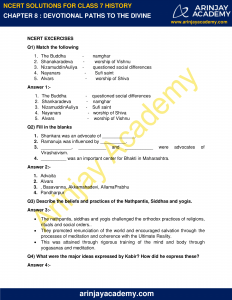 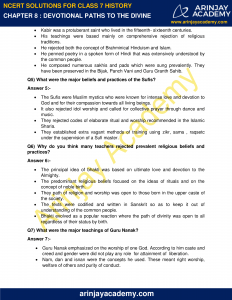 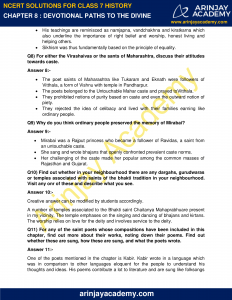 NCERT Solutions for Class 7 History Chapter 8 – Devotional Paths to the Divine– Solutions to Question 11 and Question 12-Definition of Keywords-Virashaivism, Bhakti, Sufi and Khanqah. 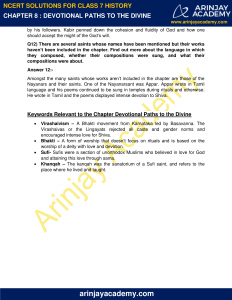 NCERT Solutions for Class 7 History Chapter 8 – Devotional Paths to the Divine Exercises includes – Match the following, Fill in the blanks and Question/Answers which helps you to understand the topic covered in Devotional Paths to the Divine Class 7 History (Social Science), in a better manner to help you to score good marks in your examinations.

Fill in the blanks

Describe the beliefs and practices of the Nathpantis, Siddhas and yogis.

What were the major ideas expressed by Kabir? How did he express these?

What were the major beliefs and practices of the Sufis?

Why do you think many teachers rejected prevalent religious beliefs and practices?

What were the major teachings of Guru Nanak?

For either the Virashaivas or the sants of Maharashtra, discuss their attitudes towards caste.

Why do you think ordinary people preserved the memory of Mirabai?

A number of temples associated to the Bhakti saint Chaitanya Mahaprabhuare present in my vicinity. The temple emphases on the singing and dancing of bhajans and kirtans. The worship relies on love for the deity and involves service to the deity.

For any of the saint poets whose compositions have been included in this chapter, find out more about their works, noting down their poems. Find out whether these are sung, how these are sung, and what the poets wrote.

One of the poets mentioned in the chapter is Kabir. Kabir wrote in a language which was in comparison to other languages eloquent for the people to understand his thoughts and ideas. His poems contribute a lot to literature and are sung like folk songs by his followers. Kabir penned down the cohesion and fluidity of God and how one should accept the might of the God’s will.

Amongst the many saints whose works aren’t included in the chapter are those of the Nayanars and their saints. One of the Nayanarsant was Appar. Appar wrote in Tamil language and his poems continued to be sung in temples during rituals and otherwise. He wrote in Tamil and the poems displayed intense devotion to Shiva.

Virashaivism – A Bhakti movement from Karnataka led by Basavanna. The Virashaivas or the Lingayats rejected all caste and gender norms and encouraged intense love for Shiva.

Bhakti – A form of worship that doesn’t focus on rituals and is based on the worship of a deity with love and devotion.

Sufi- Sufis were a section of unorthodox Muslims who believed in love for God and attaining this love through sama.

Khanqah – The kanqah was the sanatorium of a Sufi saint, and refers to the place where he lived and taught.