NCERT Solutions for Class 7 History Chapter 3 – The Delhi Sultans (Social Science), contains solutions to various questions in Exercise for Chapter 3. At the end of the Solutions, all the keywords and Notes which are important to understand From The Delhi Sultans Class 7 History, have been explained in a simple and easy to understand manner. We are providing NCERT Solutions for Class 7 all subjects which can be accessed by clicking here. 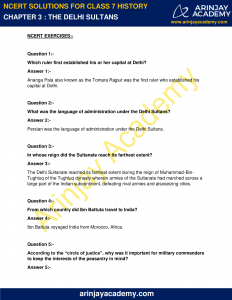 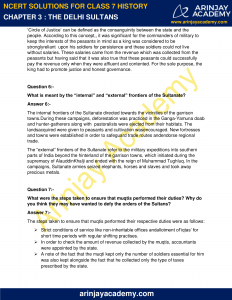 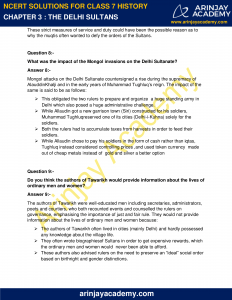 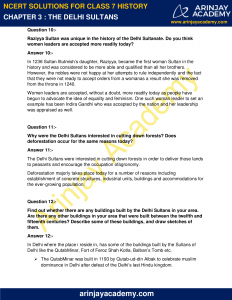 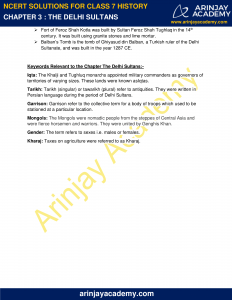 Which ruler first established his or her capital at Delhi?

Ananga Pala also known as the Tomara Rajput was the first ruler who established his capital at Delhi.

What was the language of administration under the Delhi Sultans?

Persian was the language of administration under the Delhi Sultans.

In whose reign did the Sultanate reach its farthest extent?

The Delhi Sultanate reached its farthest extent during the reign of Muhammad-Bin-Tughluq of the Tughluq dynasty wherein armies of the Sultanate had marched across a large part of the Indian subcontinent, defeating rival armies and also seizing cities.

From which country did Ibn Battuta travel to India?

According to the “circle of justice”, why was it important for military commanders to keep the interests of the peasantry in mind?

‘Circle of Justice’ can be defined as the consanguinity between the state and the people. According to this concept,, it was significant for the commanders of military to keep the interests of the peasants in mind as a king was considered to be strongly reliant  upon his soldiers for persistence and these soldiers could not live without salaries. These salaries came from the revenue which was collected from the peasants but having said that it was also true that these peasants could successfully pay the revenue only when they were affluent and contented. For the sole purpose, the king had to promote justice and honest governance.

What is meant by the “internal” and “external” frontiers of the Sultanate?

The internal frontiers of the Sultanate directed towards the vicinities of the garrison towns.During these campaigns, deforestation was practiced in the Ganga-Yamuna doab and hunter-gatherers along with  pastoralists were ejected from their habitats. The lands acquired were given to peasants and cultivation was encouraged. New fortresses and towns were established in order to safeguard trade routes and endorse regional trade.

The “external” frontiers of the Sultanate refer to the military expeditions into southern parts of India beyond the hinterland of the garrison towns, which initiated during the supremacy of Alauddin Khalji and ended with the reign of Muhammad Tughluq. In the campaigns, Sultanate armies seized elephants, horses and slaves and took away precious metals.

What were the steps taken to ensure that muqtis performed their duties? Why do you think they may have wanted to defy the orders of the Sultans?

The steps taken to ensure that muqtis performed their respective duties were as follows:

These strict measures of service and duty could have been the possible reason as to why the muqtis often wanted to defy the orders of the Sultans.

What was the impact of the Mongol invasions on the Delhi Sultanate?

Mongol attacks on the Delhi Sultanate countersigned a rise during the supremacy of Alauddin Khalji and in the early years of Muhammad Tughluq’s reign. The impact of the same is said to be as follows:

Do you think the authors of Tawarikh would provide information about the lives of ordinary men and women?

The authors of Tawarikh were well-educated men including secretaries, administrators, poets and courtiers, who both recounted events and counselled the rulers on governance, emphasising the importance of just and fair rule. They would not provide information about the lives of ordinary men and women because:

Raziyya Sultan was unique in the history of the Delhi Sultanate. Do you think women leaders are accepted more readily today?

In 1236 Sultan Iltutmish’s daughter, Raziyya, became the first woman Sultan in the history and was considered to be more able and qualified than all her brothers. However, the nobles were not happy at her attempts to rule independently and the fact that they were not ready to accept orders from a womanas a result she was removed from the throne in 1240.

Women leaders are accepted, without a doubt, more readily today as people have begun to advocate the idea of equality and feminism. One such woman leader to set an example has been Indira Gandhi who was accepted by the nation and her leadership was appraised as well.

Why were the Delhi Sultans interested in cutting down forests? Does deforestation occur for the same reasons today?

The Delhi Sultans were interested in cutting down forests in order to deliver those lands to peasants and encourage the occupation of agronomy.

Deforestation majorly takes place today for a number of reasons including establishment of concrete structures, industrial units, buildings and accommodations for the ever-growing population.

Find out whether there are any buildings built by the Delhi Sultans in your area. Are there any other buildings in your area that were built between the twelfth and fifteenth centuries? Describe some of these buildings, and draw sketches of them.

In Delhi where the place i reside in, has some of the buildings built by the Sultans of Delhi like the QutabMinar, Fort of Feroz Shah Kotla, Balban’s Tomb etc.

Iqta: The Khalji and Tughluq monarchs appointed military commanders as governors of territories of varying sizes. These lands were known as Iqtas.

Tarikh: Tarikh (singular) or tawarikh (plural) refer to antiquities. They were written in Persian language during the period of Delhi Sultans.

Garrison: Garrison refer to the collective term for a body of troops which used to be stationed at a particular location.

Mongols: The Mongols were nomadic people from the steppes of Central Asia and were fierce horsemen and warriors. They were united by Genghis Khan.

Gender: The term refers to sexes i.e. males or females.

Kharaj: Taxes on agriculture were referred to as Kharaj.