NCERT Solutions for Class 7 History Chapter 1 – Tracing Changes through a Thousand Years (Social Science), contains solutions to various questions in Exercise for Chapter 1. At the end of the Solutions, all the keywords and Notes which are important to understand From Tracing Changes through a Thousand Years Class 7 History, have been explained in a simple and easy to understand manner. We are providing NCERT Solutions for Class 7 all subjects which can be accessed by clicking here. 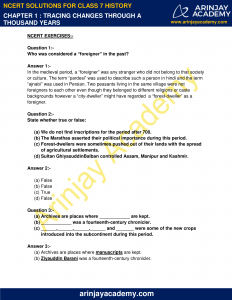 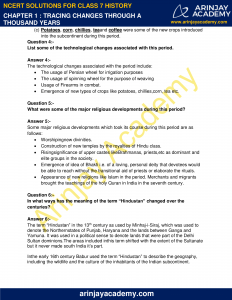 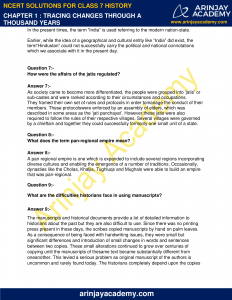 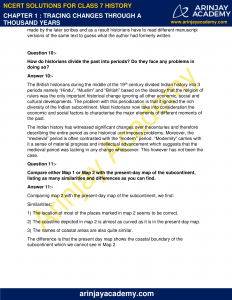 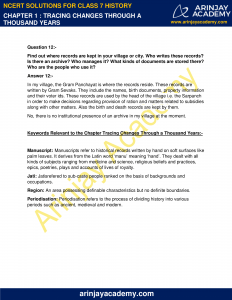 NCERT Solutions for Class 7 History Chapter 1 – Tracing Changes through a Thousand Years Exercises includes -Fill in the blanks, True/False and Question/Answers which helps you to understand the topic covered in Tracing Changes through a Thousand Years Class 7 History (Social Science), in a better manner to help you to score good marks in your examinations.

Who was considered a “foreigner” in the past?

In the medieval period, a “foreigner” was any stranger who did not belong to that society or culture. The term “pardesi” was used to describe such a person in hindi and the term “ajnabi” was used in Persian. Two peasants living in the same village were not foreigners to each other even though they belonged to different religions or caste backgrounds however a “city-dweller” might have regarded  a “forest-dweller” as a foreigner.

(a)We do not find inscriptions for the period after 700.

(b)The Marathas asserted their political importance during this period.

(c)Forest-dwellers were sometimes pushed out of their lands with the spread of agricultural settlements.

(a)Archives are places where manuscripts are kept.

(b)Ziyauddin Barani was a fourteenth-century chronicler.

(c)Potatoes, corn, chillies, teaand coffee were some of the new crops introduced into the subcontinent during this period.

List some of the technological changes associated with this period.

The technological changes associated with the period include:

What were some of the major religious developments during this period?

Some major religious developments which took its course during this period are as follows:

In what ways has the meaning of the term “Hindustan” changed over the centuries?

The term “Hindustan” in the 13th century as used by Minhaj-i-Siraj, which was used to denote the Northernstates of Punjab, Haryana and the lands between Ganga and Yamuna. It was used in a political sense to denote lands that were part of the Delhi Sultan dominions.The areas included inthis term shifted with the extent of the Sultanate but it never made south India it’s part.

In the early 16th century Babur used the term “Hindustan” to describe the geography, including the wildlife and the culture of the inhabitants of the Indian subcontinent.

In the present times, the term “India” is used referring to the modern nation-state.

Earlier, while the idea of a geographical and cultural entity like “India” did exist, the term“Hindustan” could not successfully carry the political and national connotations which we associate with it in the present day.

How were the affairs of the jatis regulated?

As society came to become more differentiated, the people were grouped into ‘jatis’ or sub-castes and were ranked according to their circumstances and occupations.

They framed their own set of rules and protocols in order to manage the conduct of their members. These protocols were enforced by an assembly of elders, which was described in some areas as the ‘jati panchayat’. However,these jatis were also

required to follow the rules of their respective villages. Several villages were governed by a chieftain and together they could successfully form only one small unit of a state.

What does the term pan-regional empire mean?

A pan regional empire is one which is expanded to include several regions incorporating diverse cultures and enabling the emergence of a number of traditions. Occasionally, dynasties like the Cholas, Khaljis, Tughluqs and Mughals were able to build an empire that was pan-regional.

What are the difficulties historians face in using manuscripts?

The manuscripts and historical documents provide a lot of detailed information to historians about the past but they are also difficult to use. Since there was no printing press present in those days, the scribes copied manuscripts by hand on palm leaves. As a consequence of being faced with handwriting issues, they were small but significant differences and introduction of small changes in words and sentences between two copies. These small alterations continued to grow over centuries of copying until the manuscripts of the same text became substantially different from one another. This levied a serious problem as original manuscript of the authors is uncommon and rarely found today. The historians completely depend upon the copies made by the later scribes and as a result historians have to read different manuscript versions of the same text to guess what the author had formerly written.

How do historians divide the past into periods? Do they face any problems in doing so?

The British historians during the middle of the 19th century divided Indian history into 3 periods namely “Hindu”, “Muslim” and “British” based on the ideology that the religion of rulers was the only important historical change ignoring all other economic, social and cultural developments. The problem with this periodization is that it ignored the rich diversity of the Indian subcontinent. Most historians now take into consideration the economic and social factors to characterise the major elements of different moments of the past.

The Indian history has witnessed significant changes over the centuries and therefore describing the entire period as one historical unit imposes problems. Moreover, the “medieval” period is often contrasted with the “modern” period. “Modernity” carries with it a sense of material progress and intellectual advancement which suggests that the medieval period was lacking in any change whatsoever. This however has not been the case.

Compare either Map 1 or Map 2 with the present-day map of the subcontinent, listing as many similarities and differences as you can find.

Comparing map 2 with the present-day map of the subcontinent, we find:

The difference is that the present day map shows the coastal boundary of the subcontinent which we cannot see in Map 2.

Find out where records are kept in your village or city. Who writes these records? Is there an archive? Who manages it? What kinds of documents are stored there? Who are the people who use it?

In my village, the Gram Panchayat is where the records reside. These records are written by Gram Sevaks. They include the names, birth documents, property information and their voter ids. These records are used by the head of the village i.e. the Sarpanch in order to make decisions regarding provision of ration and matters related to subsidies along with other matters. Also the birth and death records are kept by them.

No, there is no institutional presence of an archive in my village at the moment.

Manuscript: Manuscripts refer to historical records written by hand on soft surfaces like palm leaves. It derives from the Latin word ‘manu’ meaning ‘hand’. They dealt with all kinds of subjects ranging from medicine and science, religious beliefs and practices, epics, poetries, plays and accounts of lives of royalty.

Jati: Jatis referred to sub-caste people ranked on the basis of backgrounds and occupations.

Region: An area possessing definable characteristics but no definite boundaries.

Periodisation: Periodisation refers to the process of dividing history into various periods such as ancient, medieval and modern.