NCERT Solutions for Class 7 History Chapter 2 – New Kings and Kingdoms (Social Science), contains solutions to various questions in Exercise for Chapter 2. At the end of the Solutions, all the keywords and Notes which are important to understand From New Kings and Kingdoms Class 7 History, have been explained in a simple and easy to understand manner. We are providing NCERT Solutions for Class 7 all subjects which can be accessed by clicking here. 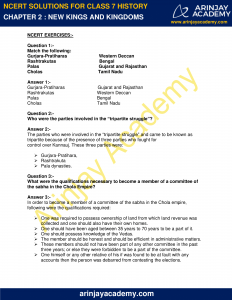 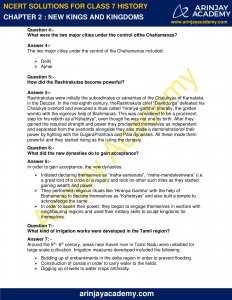 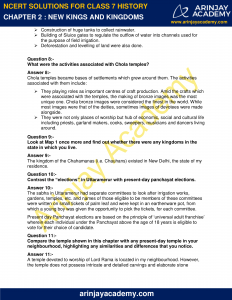 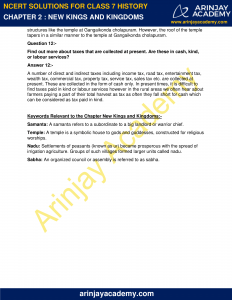 Who were the parties involved in the “tripartite struggle”?

What were the qualifications necessary to become a member of a committee of the sabha in the Chola Empire?

In order to become a member of a committee of the sabha in the Chola empire, following were the qualifications required:

What were the two major cities under the control of the Chahamanas?

The two major cities under the control of the Chahamanas included:

How did the Rashtrakutas become powerful?

Rashtrakutas were initially the subordinates or samantas of the Chalukyas of Karnataka in the Deccan. In the mid-eighth century, the Rashtrakuta chief “Dantidurga” defeated his Chalukya overlord and executed a ritual called “hiranya-garbha” (literally, the golden womb) with the vigorous help of Brahmanas. This was considered to be a prominent step for his rebirth as a“Kshatriya”, even though he was not one by birth. After they gained the required strength and power they proclaimed themselves as independent and separated from the overlords alongside they also made a demonstration of their power by fighting with the Gujjara Pratihara and Pala dynasties. All these made them powerful and they started rising as the ruling the dynasty.

Question 6:-
What did the new dynasties do to gain acceptance?

Answer 6:-
In order to gain acceptance, the new dynasties:

Question 7:-
What kind of irrigation works were developed in the Tamil region?

Question 8:-
What were the activities associated with Chola temples?

Answer 8:-
Chola temples became bases of settlements which grew around them. The activities associated with them include:

Question 9:-
Look at Map 1 once more and find out whether there were any kingdoms in the state in which you live.

Answer 9:-
The kingdom of the Chahamanas (i.e. Chauhans) existed in New Delhi, the state of my residence.

Question 10:-
Contrast the “elections” in Uttaramerur with present-day panchayat elections.

Answer 10:-
The sabha in Uttaramerur had separate committees to look after irrigation works, gardens, temples, etc. and names of those eligible to be members of these committees were written on small tickets of palm leaf and were kept in an earthenware pot, from which a young boy was given the opportunity to pick the tickets, for each committee.

Present day Panchayat elections are based on the principle of ‘universal adult franchise’ wherein each individual under the Panchayat above the age of 18 years is eligible to vote for their choice of candidate.

Question 11:-
Compare the temple shown in this chapter with any present-day temple in your neighbourhood, highlighting any similarities and differences that you notice.

Find out more about taxes that are collected at present. Are these in cash, kind, or labour services?

A number of direct and indirect taxes including income tax, road tax, entertainment tax, wealth tax, commercial tax, property tax, service tax, sales tax etc. are collected at present. These are collected in the form of cash only. In present times, it is difficult to find taxes paid in kind or labour services however in the rural areas we often hear about farmers paying a part of their total harvest as tax as often they fall short for cash which can be considered as tax paid in kind.

Samanta: A samanta refers to a subordinate to a big landlord or warrior chief.

Temple: A temple is a symbolic house to gods and goddesses, constructed for religious worships.

Nadu: Settlements of peasants (known as ur) became prosperous with the spread of irrigation agriculture. Groups of such villages formed larger units called nadu.

Sabha: An organized council or assembly is referred to as sabha.