NCERT Solutions for Class 7 History Chapter 4 – The Mughal Empire (Social Science), contains solutions to various questions in Exercise for Chapter 4. At the end of the Solutions, all the keywords and Notes which are important to understand From The Mughal Empire Class 7 History, have been explained in a simple and easy to understand manner. We are providing NCERT Solutions for Class 7 all subjects which can be accessed by clicking here. 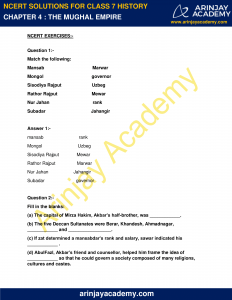 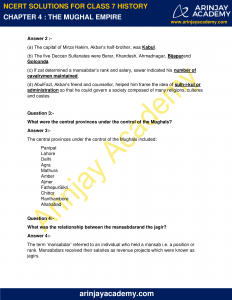 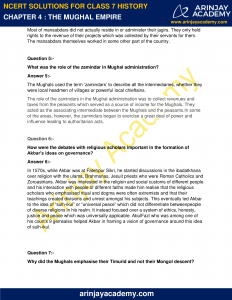 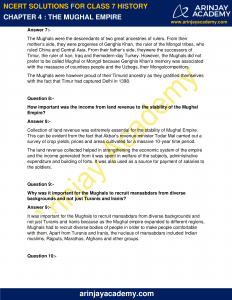 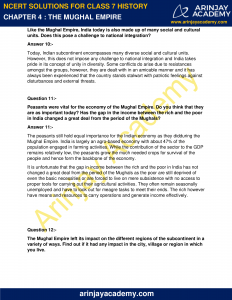 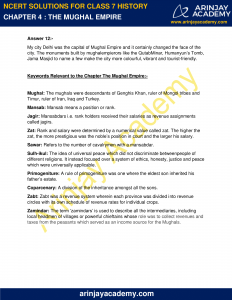 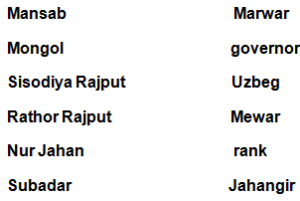 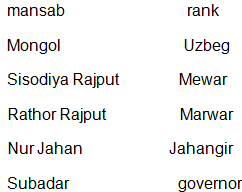 (d) AbulFazl, Akbar’s friend and counsellor, helped him frame the idea of ____________ so that he could govern a society composed of many religions, cultures and castes.

(a) The capital of Mirza Hakim, Akbar’s half-brother, was Kabul.

(b) The five Deccan Sultanates were Berar, Khandesh, Ahmadnagar, Bijapur and Golconda.

(c) If zat determined a mansabdar’s rank and salary, sawar indicated his number of cavalrymen maintained.

(d) AbulFazl, Akbar’s friend and counsellor, helped him frame the idea of sulh-i-kul or administration so that he could govern a society composed of many religions, cultures and castes.

What were the central provinces under the control of the Mughals?

The central provinces under the control of the Mughals included:

What was the relationship between the mansabdarand the jagir?

The term ‘mansabdar’ referred to an individual who held a mansab i.e. a position or rank. Mansabdars received their salaries as revenue projects which were known as jagirs.

Most of mansabdars did not actually reside in or administer their jagirs. They only held rights to the revenue of their projects which was collected by their servants for them. The mansabdars themselves worked in some other part of the country.

What was the role of the zamindar in Mughal administration?

The Mughals used the term ‘zamindars’ to describe all the intermediaries, whether they were local headmen of villages or powerful local chieftains.

The role of the zamindars in the Mughal administration was to collect revenues and taxes from the peasants which served as a source of income for the Mughals. They acted as the associating intermediate between the Mughals and the peasants.In some of the areas, however, the zamindars began to exercise a great deal of power and influence leading to authoritarian acts.

How were the debates with religious scholars important in the formation of Akbar’s ideas on governance?

In 1570s, while Akbar was at Fatehpur Sikri, he started discussions in the ibadatkhana over religion with the ulama, Brahmanas, Jesuit priests who were Roman Catholics and Zoroastrians. Akbar was interested in the religion and social customs of different people and his interaction with people of different faiths made him realise that the religious scholars who emphasised ritual and dogma were often extremists and that their teachings created divisions and unrest amongst his subjects. This eventually led Akbar to the idea of “sulh-ikul” or “universal peace” which did not differentiate betweenpeople of diverse religions in his realm. It instead focused over a system of ethics, honesty, justice and peace which was universally applicable. AbulFazl who was among one of his court’s 9 gemsalso helped Akbar in framing a vision of governance around this idea of sulh-ikul.

Why did the Mughals emphasise their Timurid and not their Mongol descent?

The Mughals were the descendants of two great ancestries of rulers. From their mother’s side, they were progenies of Genghis Khan, the ruler of the Mongol tribes, who ruled China and Central Asia. From their father’s side, theywere the successors of Timur, the ruler of Iran, Iraq and themodern-day Turkey. However, the Mughals did not prefer to be called Mughal or Mongol because Genghis Khan’s memory was associated with the massacre of countless people and the Uzbegs, their Mongolcompetitors.

The Mughals were however proud of their Timurid ancestry as they gratified themselves with the fact that Timur had captured Delhi in 1398.

How important was the income from land revenue to the stability of the Mughal Empire?

Collection of land revenue was extremely essential for the stability of Mughal Empire. This can be evident from the fact that Akbar’s revenue minister Todar Mal carried out a survey of crop yields, prices and areas cultivated for a massive 10-year time period.

The land revenue collected helped in strengthening the economic system of the empire and the income generated from it was spent in welfare of the subjects, administrative expenditure and building of forts. It was also used as a source for payment of salaries to the soldiers.

Why was it important for the Mughals to recruit mansabdars from diverse backgrounds and not just Turanis and Iranis?

It was important for the Mughals to recruit mansabdars from diverse backgrounds and not just Turanis and Iranis because as the Mughal empire expanded to different regions, Mughals had to recruit diverse bodies of people in order to make people comfortable with them. Apart from Turanis and Iranis, the nucleus of mansabdars included Indian muslims, Rajputs, Marathas, Afghans and other groups.

Like the Mughal Empire, India today is also made up of many social and cultural units. Does this pose a challenge to national integration?

Today, Indian subcontinent encompasses many diverse social and cultural units. However, this does not impose any challenge to national integration and India takes pride in its concept of unity in diversity. Some conflicts do arise due to resistances amongst the groups, however, they are dealt with in an amicable manner and it has always been experienced that the country stands stalwart with patriotic feelings against disturbances and external threats.

Peasants were vital for the economy of the Mughal Empire. Do you think that they are as important today? Has the gap in the income between the rich and the poor in India changed a great deal from the period of the Mughals?

The peasants still hold equal importance for the Indian economy as they didduring the Mughal Empire. India is largely an agro-based economy with about 47% of the population engaged in farming activities. While the contribution of the sector to the GDP remains relatively low, the peasants grow the much needed crops for survival of the people and hence form the backbone of the economy.

It is unfortunate that the gap in income between the rich and the poor in India has not changed a great deal from the period of the Mughals as the poor are still deprived of even the basic necessities or are forced to live on mere subsistence with no access to proper tools for carrying out their agricultural activities. They often remain seasonally unemployed and have to look out for meagre tasks to meet their ends. The rich however have means and resources to carry operations and generate income effectively.

The Mughal Empire left its impact on the different regions of the subcontinent in a variety of ways. Find out if it had any impact in the city, village or region in which you live

My city Delhi was the capital of Mughal Empire and it certainly changed the face of the city. The monuments built by mughalempierors like the QutabMinar, Humanyun’s Tomb, Jama Masjid to name a few make the city more colourful, vibrant and tourist-friendly.

Mughal: The mughals were descendants of Genghis Khan, ruler of Mongol tribes and Timur, ruler of Iran, Iraq and Turkey.

Zat: Rank and salary were determined by a numerical value called zat. The higher the zat, the more prestigious was the noble’s position in court and the larger his salary.

Sawar: Refers to the number of cavalrymen with a mansabdar.

Sulh-ikul: The idea of universal peace which did not discriminate betweenpeople of different religions. It instead focused over a system of ethics, honesty, justice and peace which were universally applicable.

Primogeniture: A rule of primogeniture was one where the eldest son inherited his father’s estate.

Coparcenary: A division of the inheritance amongst all the sons.

Zabt: Zabt was a revenue system wherein each province was divided into revenue circles with its own schedule of revenue rates for individual crops.

Zamindar: The term ‘zamindars’ is used to describe all the intermediaries, including local headmen of villages or powerful chieftains whose role was to collect revenues and taxes from the peasants which served as an income source for the Mughals.