NCERT Solutions for Class 7 History Chapter 10 – Eighteenth Century Political Formations (Social Science), contains solutions to various questions in Exercise for Chapter 10. At the end of the Solutions, all the keywords and Notes which are important to understand From Eighteenth Century Political Formations Class 7 History, have been explained in a simple and easy to understand manner. We are providing NCERT Solutions for Class 7 all subjects which can be accessed by clicking here. 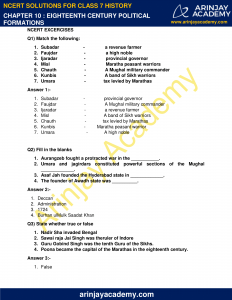 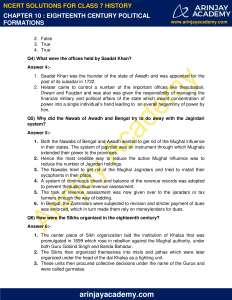 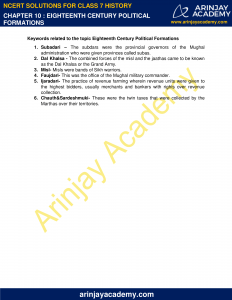 NCERT Solutions for Class 7 History Chapter 10 – Eighteenth Century Political Formations Exercises includes – Match the following, Fill in the blanks, True/False and Question/Answers which helps you to understand the topic covered in Eighteenth Century Political Formations Class 7 History (Social Science), in a better manner to help you to score good marks in your examinations.

Fill in the blanks

State whether true or false

2.Sawai raja Jai Singh was the ruler of Indore

3.Guru Gobind Singh was the tenth Guru of the Sikhs.

4.Poona became the capital of the Marathas in the eighteenth century.

What were the offices held by Saadat Khan?

Why did the Nawab of Awadh and Bengal try to do away with the Jagirdari system?

How were the Sikhs organized in the eighteenth century?

Why did the Marathas want to expand beyond the Deccan?

What were the policies adopted by Asaf Jah to strengthen his position?

Do you think merchants and bankers today have the kind of influence they had in the eighteenth century?

Merchants and bankers held a lot of power as ijaradars and moneylender since the eighteenth century. However, in the present scenario, with the imminence of a democratically elected government the situation has significantly changed.

The power is now exerted by bigger corporations and power houses in what the government does and in policy decisions. Thus, the role has shifted but with substantial changes.

Did any of the kingdoms mentioned in this chapter develop in your state? If so, In what ways do you think life in the state would have been different in the eighteenth century from what it is in the twenty-first century?

Creative answer students are requested to try it themselves.

HINT: For this answer, any particular regional kingdom has to be selected and the contrast has to be made with the present situation. The comparison can be drawn in terms of the primacy any group received, the culture of patronage, the evolving tastes and preferences and the structure of polity.

Find out more about the architecture and culture associated with the new courts of any of the following Awadh, Bengal or Hyderabad.

Under the Awadhnawabs a mixed composite culture into being.. The Bara Imabara is one such example. Lucknow reached new level of culinary heights with the patronage that was being given to the cooks and several new recipes and dishes appeared.  Dances like Kathak were heavily supported under rulers like Wajid Ali Shah, as was music. A new gharana developed under the Nawabs of Awadh. Textile and handiwork like that of chikankari and finely made cloths also received a lot of attention.

Collect popular tales about rulers from any one of the following groups of the people: the Rajputs, Jats, Sikhs or Marathas.

The story of Sawai Madho Sing of Jaipur is an interesting one. He emanated throne following the suicide of his brother Ishwari Singh who used venom along with his harem to kill himself. Madho Singh took over the reigns under the loom of a Maratha threat. He invited the Marathas to dinner where he offered them poisoned food however, the Marathas evaded successfully. The next day he killed the 5000 Marathas who were captured within Jaipur.

Subadari – The subdars were the provincial governors of the Mughal administration who were given provinces called subas.

Dal Khalsa – The combined forces of the misl and the jaathas came to be known as the Dal Khalsa or the Grand Army.

Faujdari- This was the office of the Mughal military commander.

Ijaradari- The practice of revenue farming wherein revenue units were given to the highest bidders, usually merchants and bankers with rights over revenue collection.

Chauth & Sardeshmuki- These were the twin taxes that were collected by the Marthas over their territories.