NCERT Solutions for Class 7 History Chapter 5 – Rulers and Buildings (Social Science), contains solutions to various questions in Exercise for Chapter 5. At the end of the Solutions, all the keywords and Notes which are important to understand From Rulers and Buildings Class 7 History, have been explained in a simple and easy to understand manner. We are providing NCERT Solutions for Class 7 all subjects which can be accessed by clicking here. 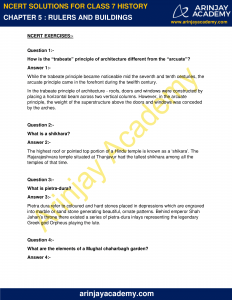 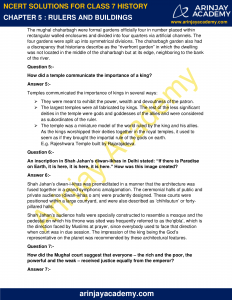 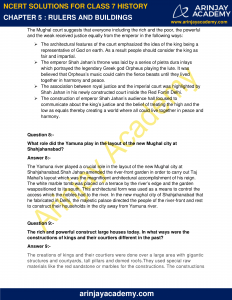 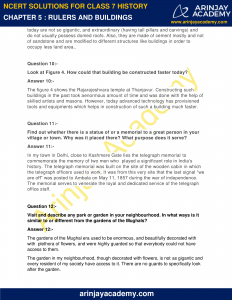 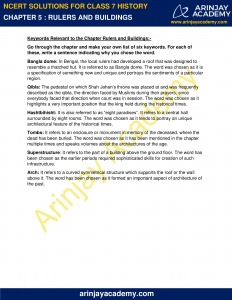 How is the “trabeate” principle of architecture different from the “arcuate”?

While the trabeate principle became noticeable mid the seventh and tenth centuries, the arcuate principle came in the forefront during the twelfth century.

What is a shikhara?

The highest roof or pointed top portion of a Hindu temple is known as a ‘shikara’. The Rajarajeshvara temple situated at Thanjavur had the tallest shikhara among all the temples of that time.

What are the elements of a Mughal chaharbagh garden?

The mughal chaharbagh were formal gardens officially four in number placed within rectangular walled enclosures and divided into four quarters via artificial channels. The four gardens were split up into symmetrical divisions. The chaharbagh garden also had a discrepancy that historians describe as the “riverfront garden” in which the dwelling was not located in the middle of the chaharbagh but at its edge, neighboring to the bank of the river.

How did a temple communicate the importance of a king?

Temples communicated the importance of kings in several ways:

Shah Jahan’s diwan-i-khas was premeditated in a manner that the architecture was fused together in a grand symphonic amalgamation. The ceremonial halls of public and private audience (diwan-ikhas o am) were prudently designed. These courts were positioned within a large courtyard, and were also described as ‘chihilsutun’ or forty-pillared halls.

Shah Jahan’s audience halls were specially constructed to resemble a mosque and the pedestal on which his throne was sited was frequently referred to as the‘qibla’, which is the direction faced by Muslims at prayer, since everybody used to face that direction when court was in due session. The impression of the king being the God’s representative on the planet was recommended by these architectural features.

How did the Mughal court suggest that everyone – the rich and the poor, the powerful and the weak – received justice equally from the emperor?

The Mughal court suggests that everyone including the rich and the poor, the powerful and the weak received justice equally from the emperor in the following ways:

What role did the Yamuna play in the layout of the new Mughal city at Shahjahanabad?

The Yamuna river played a crucial role in the layout of the new Mughal city at Shahjahanabad.Shah Jahan amended the river-front garden in order to carry out Taj Mahal’s layout which was the magnificent architectural accomplishment of his reign. The white marble tomb was placed on a terrace by the river’s edge and the garden waspositioned to its south. This architectural form was used as a means to control the access which the nobles had to the river. In the new mughal city of Shahjahanabad that he fabricated in Delhi, the majestic palace directed the people of the river-front and rest to construct their households in the city away from Yamuna river.

The rich and powerful construct large houses today. In what ways were the constructions of kings and their courtiers different in the past?

The creations of kings and their courtiers were done over a large area with gigantic structures and courtyards, tall pillars and domed roofs.They used special raw materials like the red sandstone or marbles for the constructions. The constructions  today are not so gigantic, and extraordinary (having tall pillars and carvings) and do not usually possess domed roofs. Also, they are made of cement mostly and not of sandstone and are modified to different structures like bulidings in order to occupy less land area..

Look at Figure 4. How could that building be constructed faster today?

The figure 4 shows the Rajarajeshvara temple at Thanjavur. Constructing such buildings in the past took aenormous amount of time and was done with the help of skilled artists and masons. However, today advanced technology has provisioned tools and equipments which helps in construction of such a building much faster.

Find out whether there is a statue of or a memorial to a great person in your village or town. Why was it placed there? What purpose does it serve?

Visit and describe any park or garden in your neighbourhood. In what ways is it similar to or different from the gardens of the Mughals?

The gardens of the Mughal era used to be enormous, and beautifully decorated with with  plethora of flowers, and were highly guarded so that everybody could not have access to them.

The garden in my neighbourhood, though decorated with flowers, is not as gigantic and every resident of my society have access to it. There are no guards to specifically look after the garden.

Bangla dome: In Bengal, the local rulers had developed a roof that was designed to resemble a thatched hut. It is referred to as Bangla dome. The word was chosen as it is a specification of something new and unique and portrays the sentiments of a particular region.

Qibla: The pedestal on which Shah Jahan’s throne was placed at and was frequently described as the qibla, the direction faced by Muslims during their prayers, since everybody faced that direction when court was in session. The word was chosen as it highlights a very important position that the king held during the historical times.

Hashtbihisht: It is also referred to as “eight paradises”. It refers to a central hall surrounded by eight rooms. The word was chosen as it tends to portray an unique architectural feature of the historical times.

Tombs: It refers to an enclosure or monument in memory of the deceased, where the dead has been buried. The word was chosen as it has been mentioned in the chapter multiple times and speaks volumes about the architectures of the age.

Superstructure: It refers to the part of a building above the ground floor. The word has been chosen as the earlier periods required sophisticated skills for creation of such infrastructure.

Arch: It refers to a curved symmetrical structure which supports the roof or the wall above it. The word has been chosen as it formed an important aspect of architecture of the past.