NCERT Solutions for Class 6 History Chapter 9 – Vital Villages, Thriving Towns (Social Science), contains solutions to various questions in Exercise for Chapter 9.  At the end of the Solutions, all the keywords and Notes which are important to understand From Vital Villages, Thriving Towns Class 6 History, have been explained in a simple and easy to understand manner. We are providing NCERT Solutions for Class 6 all subjects which can be accessed by clicking here. 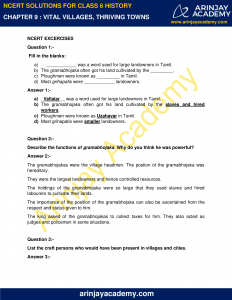 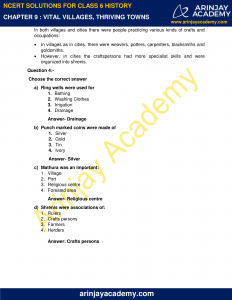 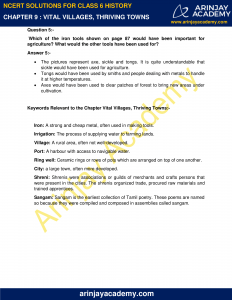 (a) Vellalar was a word used for large landowners in Tamil.

(b)The gramabhojaka often got his land cultivated by the slaves and hired workers.

Describe the functions of gramabhojaka. Why do you think he was powerful?

They were the largest landowners and hence controlled resources.

The holdings of the gramabhojaka were so large that they used slaves and hired labourers to cultivate their lands.

The importance of the position of the gramabhojaka can also be ascertained from the respect and status given to him.

The king asked of the gramabhojakas to collect taxes for him. They also acted as judges and policemen in some situations.

List the craft persons who would have been present in villages and cities.

In both villages and cities there were people practicing various kinds of crafts and occupations:

(a)Ring wells were used for

(b)Punch marked coins were made of

Which of the iron tools shown on page 87 would have been important for agriculture? What would the other tools have been used for?

Irrigation: The process of supplying water to farming lands.

Ring well: Ceramic rings or rows of pots which are arranged on top of one another.

Shreni: Shrenis were associations or guilds of merchants and crafts persons that were present in the cities. The shrenis organized trade, procured raw materials and trained apprentices.

Sangam: Sangam is the earliest collection of Tamil poetry. These poems are named so because they were compiled and composed in assemblies called sangam.