NCERT Solutions for Class 6 History Chapter 11 – New Empires and Kingdoms (Social Science), contains solutions to various questions in Exercise for Chapter 11. At the end of the Solutions, all the keywords and Notes which are important to understand From New Empires and Kingdoms Class 6 History, have been explained in a simple and easy to understand manner. We are providing NCERT Solutions for Class 6 all subjects which can be accessed by clicking here. 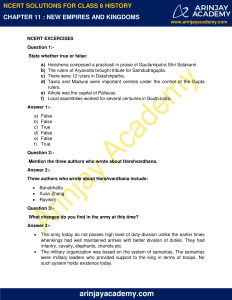 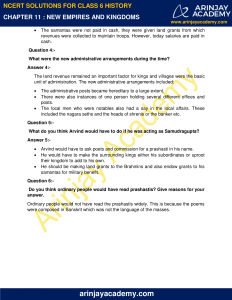 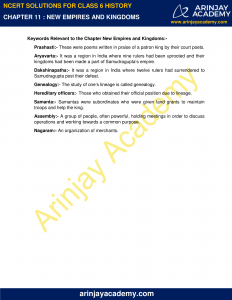 (a)Harishena composed a prashasti in praise of Gautamiputra Shri Satakarni.

(c)There were 12 rulers in Dakshinpatha.

(d)Taxila and Madurai were important centres under the control of the Gupta rulers.

(e)Aihole was the capital of Pallavas.

Mention the three authors who wrote about Harshvardhana.

Three authors who wrote about Harshvardhana include:

What changes do you find in the army at this time?

What were the new administrative arrangements during the time?

The land revenue remained an important factor for kings and villages were the basic unit of administration. The new administrative arrangements included:

What do you think Arvind would have to do if he was acting as Samudragupta?

Do you think ordinary people would have read prashastis? Give reasons for your answer.

Ordinary people would not have read the prashastis widely. This is because the poems were composed in Sanskrit which was not the language of the masses.

Prashasti:- These were poems written in praise of a patron king by their court poets.

Aryavarta:- It was a region in India where nine rulers had been uprooted and their kingdoms had been made a part of Samudragupta’s empire.

Dakshinapatha:- It was a region in India where twelve rulers had surrendered to Samudragupta post their defeat.

Genealogy:– The study of one’s lineage is called genealogy.

Hereditary officers:– Those who obtained their official position due to lineage.

Samanta:- Samantas were subordinates who were given land grants to maintain troops and help the king.

Assembly:- A group of people, often powerful, holding meetings in order to discuss operations and working towards a common purpose.

Nagaram:- An organization of merchants.