NCERT Solutions for Class 6 History Chapter 4 – In the Earliest Cities (Social Science), contains solutions to various questions in Exercise for Chapter 4.  At the end of the Solutions, all the keywords and Notes which are important to understand From In the Earliest Cities Class 6 History, have been explained in a simple and easy to understand manner. We are providing NCERT Solutions for Class 6 all subjects which can be accessed by clicking here. 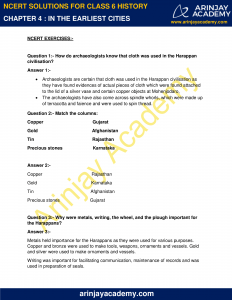 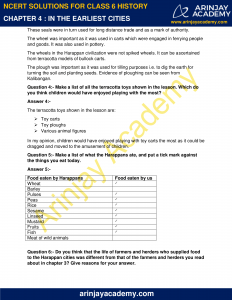 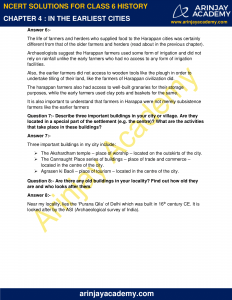 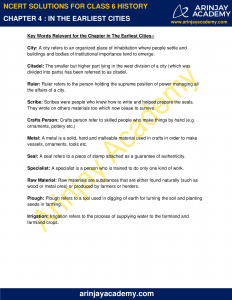 How do archaeologists know that cloth was used in the Harappan civilisation? 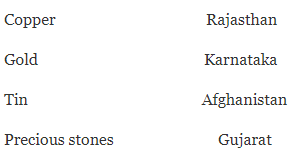 Why were metals, writing, the wheel, and the plough important for the Harappans?

Writing was important for facilitating communication, maintenance of records and was used in preparation of seals.

These seals were in turn used for long distance trade and as a mark of authority.

The wheel was important as it was used in carts which were engaged in ferrying people and goods. It was also used in pottery.

The wheels in the Harappan civilization were not spiked wheels. It can be ascertained from terracotta models of bullock carts.

The plough was important as it was used for tilling purposes i.e. to dig the earth for turning the soil and planting seeds. Evidence of ploughing can be seen from Kalibangan.

Make a list of all the terracotta toys shown in the lesson. Which do you think children would have enjoyed playing with the most?

The terracotta toys shown in the lesson are:

In my opinion, children would have enjoyed playing with toy carts the most as it could be dragged and moved to the amusement of children.

Make a list of what the Harappans ate, and put a tick mark against the things you eat today. 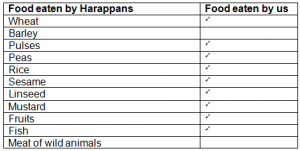 Also, the earlier farmers did not access to wooden tools like the plough in order to undertake tilling of their land, like the farmers of Harappan civilization did.

The harappan farmers also had access to well-built granaries for their storage purposes, while the early farmers used clay pots and baskets for the same.

Describe three important buildings in your city or village. Are they located in a special part of the settlement (e.g. the centre)? What are the activities that take place in these buildings?

Three important buildings in my city include:

Are there any old buildings in your locality? Find out how old they are and who looks after them.

Near my locality, lies the ‘Purana Qila’ of Delhi which was built in 16th century CE. It is looked after by the ASI (Archaeological survey of India).

City: A city refers to an organized place of inhabitation where people settle and buildings and bodies of institutional importance tend to emerge.

Citadel: The smaller but higher part lying in the west division of a city (which was divided into parts) has been referred to as citadel.

Ruler: Ruler refers to the person holding the supreme position of power managing all the affairs of a city.

Scribe: Scribes were people who knew how to write and helped prepare the seals. They wrote on others materials too which now cease to survive.

Metal: A metal is a solid, hard and malleable material used in crafts in order to make vessels, ornaments, tools etc.

Seal: A seal refers to a piece of stamp attached as a guarantee of authenticity.

Specialist: A specialist is a person who is trained to do only one kind of work.

Raw Material: Raw materials are substances that are either found naturally (such as wood or metal ores) or produced by farmers or herders.

Plough: Plough refers to a tool used in digging of earth for turning the soil and planting seeds in farming.

Irrigation: Irrigation refers to the process of supplying water to the farmland and farmland crops.