NCERT Solutions for Class 6 History Chapter 10 – Traders, Kings and Pilgrims (Social Science), contains solutions to various questions in Exercise for Chapter 10.  At the end of the Solutions, all the keywords and Notes which are important to understand From Traders, Kings and Pilgrims Class 6 History, have been explained in a simple and easy to understand manner. We are providing NCERT Solutions for Class 6 all subjects which can be accessed by clicking here. 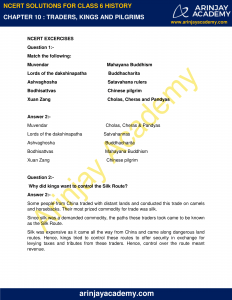 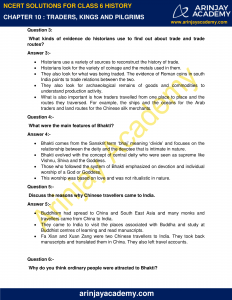 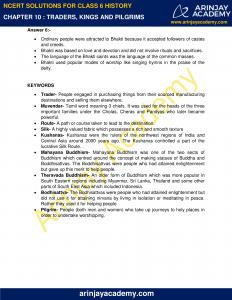 Why did kings want to control the Silk Route?

Some people from China traded with distant lands and conducted this trade on camels and horsebacks. Their most prized commodity for trade was silk.

Since silk was a demanded commodity, the paths these traders took came to be known as the Silk Route.

Silk was expensive as it came all the way from China and came along dangerous land routes. Hence, kings tried to control these routes to offer security in exchange for levying taxes and tributes from these traders. Hence, control over the route meant revenue.

What kinds of evidence do historians use to find out about trade and trade routes?

What were the main features of Bhakti?

Discuss the reasons why Chinese travellers came to India.

Why do you think ordinary people were attracted to Bhakti?

Trader- People engaged in purchasing things from their sourced manufacturing destinations and selling them elsewhere.

Muvendar- Tamil word meaning 3 chiefs. It was used for the heads of the three important families under the Cholas, Cheras and Pandyas who later became powerful.

Route- A path or course taken to lead to the destination.

Kushanas- Kushanas were the rulers of the northwest regions of India and Central Asia around 2000 years ago. The Kushanas controlled a part of the lucrative Silk Route. .

Theravada Buddhism- An older form of Buddhism which was more popular in South Eastern regions including Myanmar, Sri Lanka, Thailand and some other parts of South East Asia which included Indonesia.

Bodhisattva- The Bodhisattvas were people who had attained enlightenment but did not use it for attaining nirvana by living in isolation or meditating in peace. Rather they used it for helping people

Pilgrim- People (both men and women) who take up journeys to holy places in order to undertake worshipping.