NCERT Solutions for Class 6 History Chapter 6 – Kingdoms, Kings and an Early Republic (Social Science), contains solutions to various questions in Exercise for Chapter 6.  At the end of the Solutions, all the keywords and Notes which are important to understand From Kingdoms, Kings and an Early Republic Class 6 History, have been explained in a simple and easy to understand manner. We are providing NCERT Solutions for Class 6 all subjects which can be accessed by clicking here. 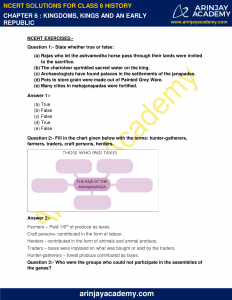 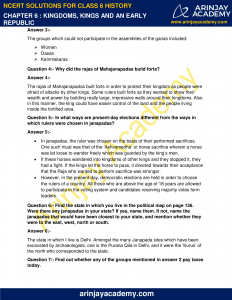 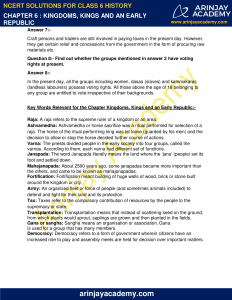 NCERT Solutions for Class 6 History Chapter 6 – Kingdoms, Kings and an Early Republic Exercises includes-True and False, Fill the Chart and Question/Answers which helps you to understand the topic covered in Kingdoms, Kings and an Early Republic Class 6 History (Social Science), in a better manner to help you to score good marks in your examinations.

(a)Rajas who let the ashvamedha horse pass through their lands were invited to the sacrifice.

(c)Archaeologists have found palaces in the settlements of the janapadas.

(d)Pots to store grain were made out of Painted Grey Ware.

(e)Many cities in mahajanapadas were fortified.

Fill in the chart given below with the terms: hunter-gatherers, farmers, traders, craft persons, herders.

Craft persons- contributed in the form of labour.

Herders – contributed in the form of animals and animal produce.

Traders – taxes were imposed on what was bought or sold by the traders.

Who were the groups who could not participate in the assemblies of the ganas?

The groups which could not participate in the assemblies of the ganas included:

Why did the rajas of Mahajanapadas build forts?

The rajas of Mahajanapadas built forts in order to protect their kingdom as people were afraid of attacks by other kings. Some rulers built forts as they wanted to show their wealth and power by building really large, impressive walls around their kingdoms. Also in this manner, the king could have easier control of the land and the people living inside the fortified area.

In what ways are present-day elections different from the ways in which rulers were chosen in janapadas?

Find the state in which you live in the political map on page 136. Were there any janapadas in your state? If yes, name them. If not, name the janapadas that would have been closest to your state, and mention whether they were to the east, west, north or south.

The state in which I live is Delhi. Amongst the many Janapada sites which have been excavated by archaeologists, one is the Purana Qila in Delhi, and it were the ‘Kurus’ of the north who corresponded to the state.

Find out whether any of the groups mentioned in answer 2 pay taxes today.

Craft persons and traders are still involved in paying taxes in the present day. However, they get certain relief and concessions from the government in the form of procuring raw materials etc.

Find out whether the groups mentioned in answer 3 have voting rights at present.

In the present day, all the groups including women, dasas (slaves) and kammakaras (landless labourers) possess voting rights. All those above the age of 18 belonging to any group are entitled to vote irrespective of their backgrounds.

Raja: A raja refers to the supreme ruler of a kingdom or an area.

Ashvamedha: Ashvamedha or horse sacrifice was a ritual performed for selection of a raja. The horse of the ritual performing king was let loose (guarded by his men) and the decision to allow or stop the horse decided further course of actions.

Varna: The priests divided people in the early society into four groups, called the varnas. According to them, each varna had different set of functions.

Janapada: The word Janapada literally means the land where the ‘jana’ (people) set its foot and settled down.

Mahajanapada: About 2500 years ago, some janapadas became more important than the others, and came to be known as mahajanapadas.

Fortification: Fortification meant building of huge walls of wood, brick or stone built around the kingdom or city.

Army: An organized fleet or force of people (and sometimes animals included) to defend and fight for their land and its protection.

Tax: Taxes refer to the compulsory contribution of resources by the people to the supremacy or state.

Transplantation: Transplantation means that instead of scattering seed on the ground, from which plants would sprout, saplings are grown and then planted in the fields.

Gana or sangha: Sangha means an organisation or association. Gana is used for a group that has many members.

Democracy: Democracy refers to a form of government wherein citizens have an increased role to play and assembly meets are held for decision over important matters.