NCERT Solutions for Class 6 History Chapter 7 – New Questions and Ideas (Social Science), contains solutions to various questions in Exercise for Chapter 7.  At the end of the Solutions, all the keywords and Notes which are important to understand From New Questions and Ideas Class 6 History, have been explained in a simple and easy to understand manner. We are providing NCERT Solutions for Class 6 all subjects which can be accessed by clicking here. 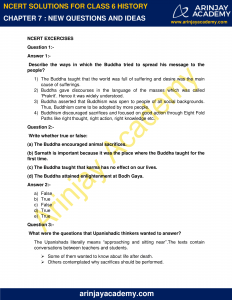 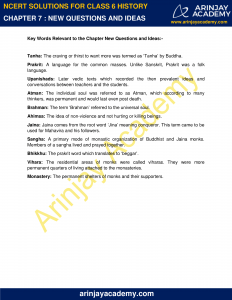 Describe the ways in which the Buddha tried to spread his message to the people?

Write whether true or false:

(a) The Buddha encouraged animal sacrifices.

(b) Sarnath is important because it was the place where the Buddha taught for the first time.

(c) The Buddha taught that karma has no effect on our lives.

(e) Upanishadic thinkers believed that the atman and brahman were ultimately one.

What were the questions that Upanishadic thinkers wanted to answer?

Many of these thinkers felt that there was something permanent in the universe that would last even after death.They described this as the atman or the individual soul and the brahman or the universal soul.

What were the main teachings of the Mahavira?

Mahavira was a Lichchhavi prince who left his home at the age of thirty and went to live in the forest.

Why do you think Anagha’s mother wanted her to know the story of Buddha?

In my opinion,  Anangha’s mother wanted her to know of the story of Buddha as:

Do you think it would have been easy for slaves to join the sangha? Give reasons for your answer?

Yes, it would have been easy for slaves to join the sangha. This would be so because:

Tanha: The craving or thirst to want more was termed as ‘Tanha’ by Buddha.

Prakrit: A language for the common masses. Unlike Sanskrit, Prakrit was a folk language.

Upanishads: Later vedic texts which recorded the then prevalent ideas and conversations between teachers and the students.

Atman: The individual soul was referred to as Atman, which according to many thinkers, was permanent and would last even post death.

Brahman: The term ‘Brahman’ referred to the universal soul.

Ahimsa: The idea of non-violence and not hurting or killing beings.

Jaina: Jaina comes from the root word ‘Jina’ meaning conqueror. This term came to be used for Mahavira and his followers.

Sangha: A primary mode of monastic organization of Buddhist and Jaina monks. Members of a sangha lived and prayed together.

Bhikkhu: The prakrit word which translates to ‘beggar’.

Vihara: The residential areas of monks were called viharas. They were more permanent quarters of living attached to the monasteries.

Monastery: The permanent shelters of monks and their supporters.