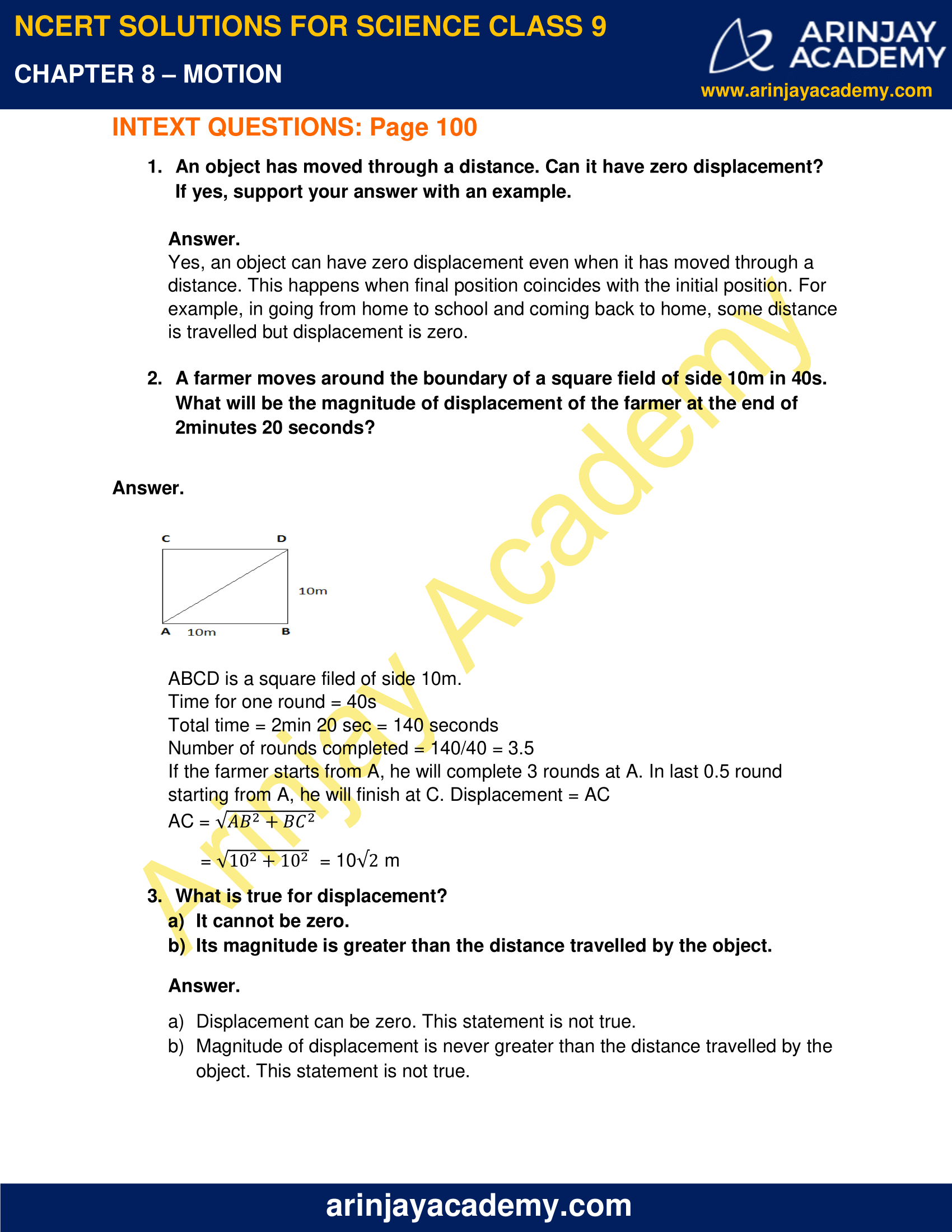 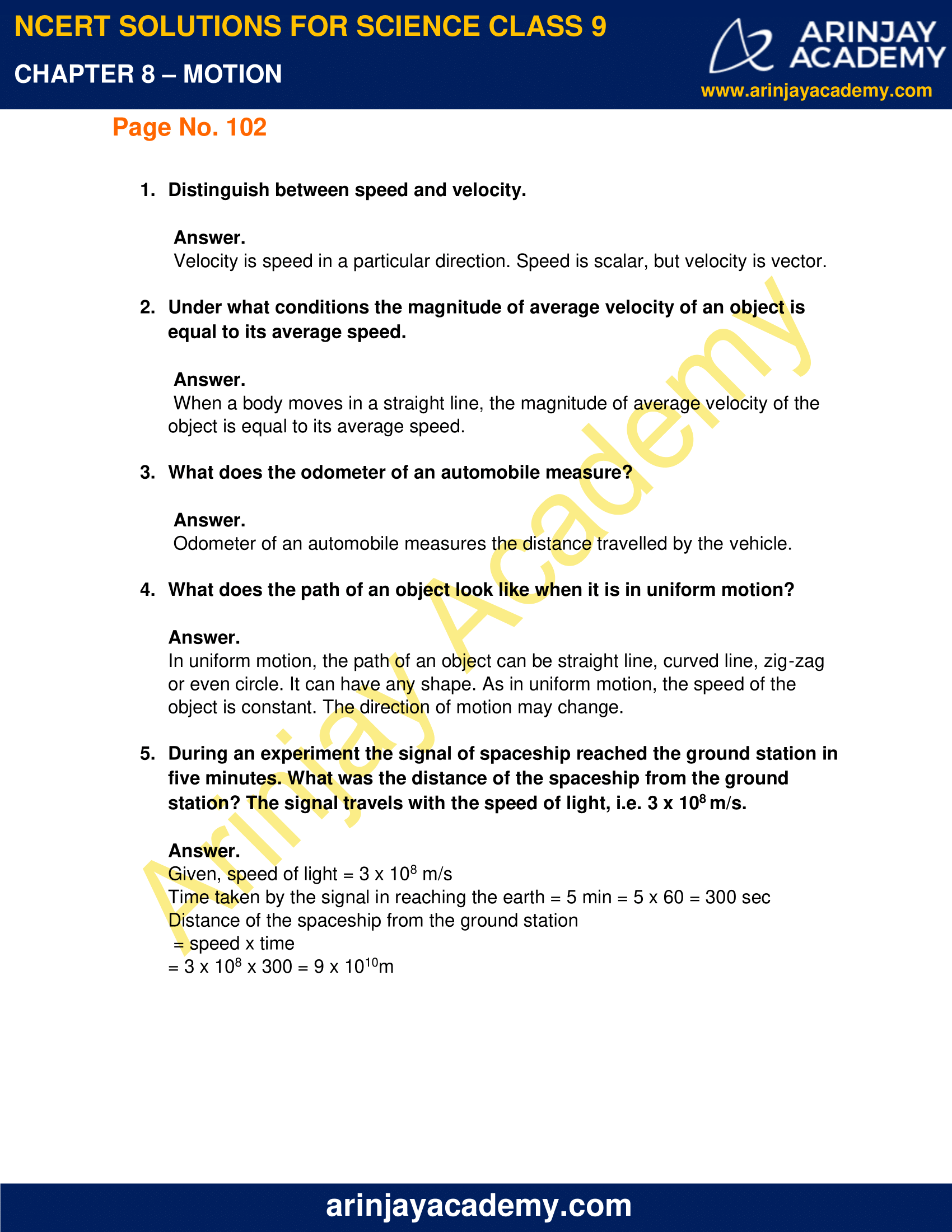 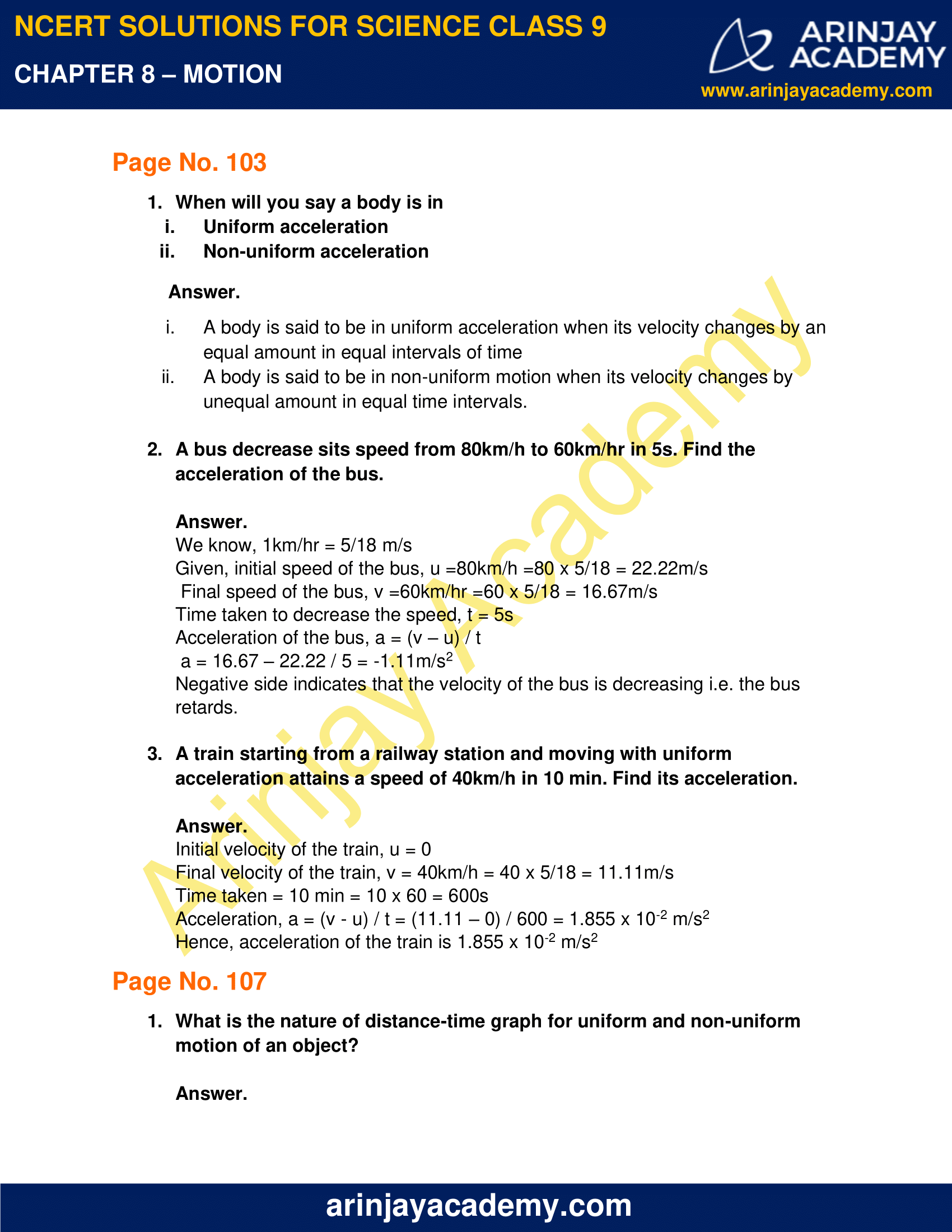 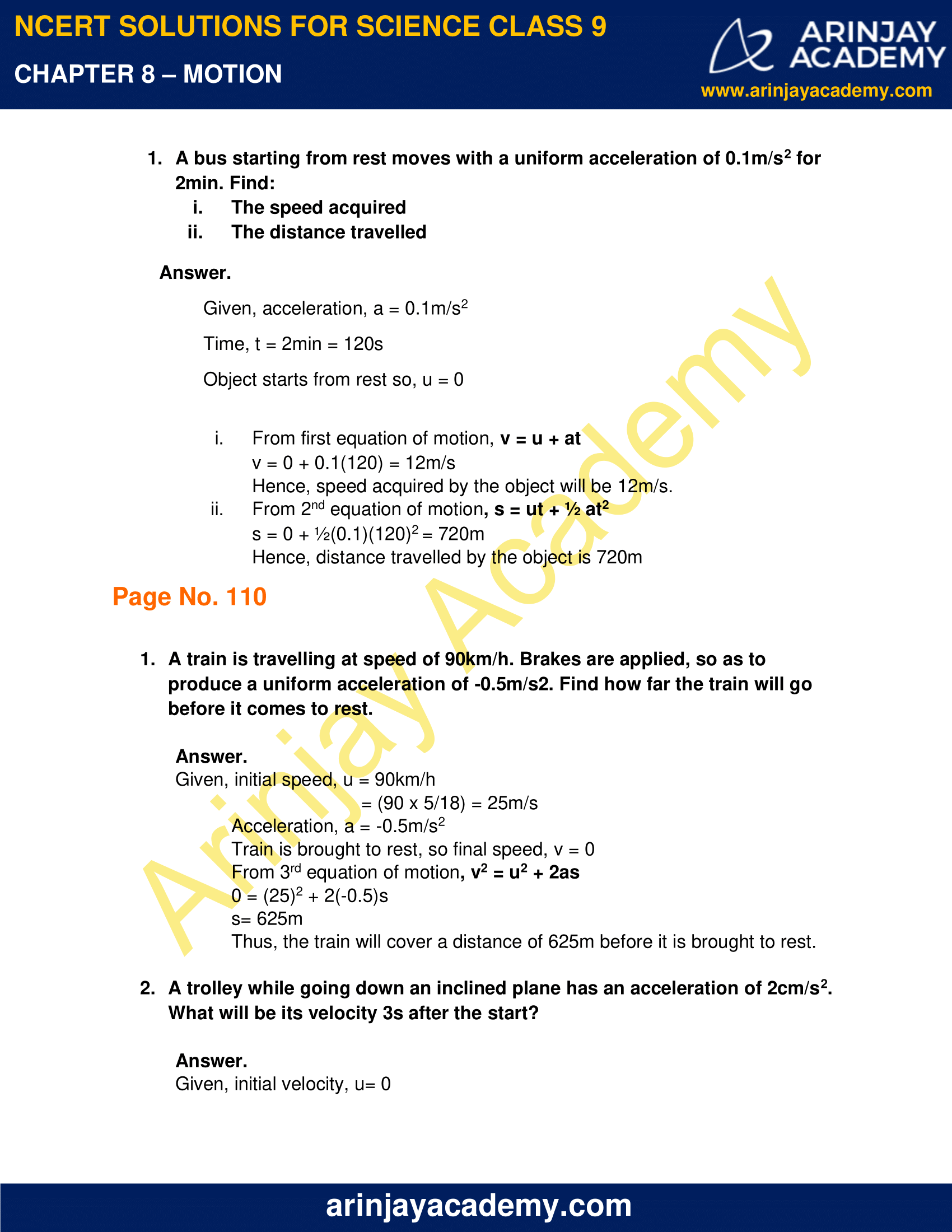 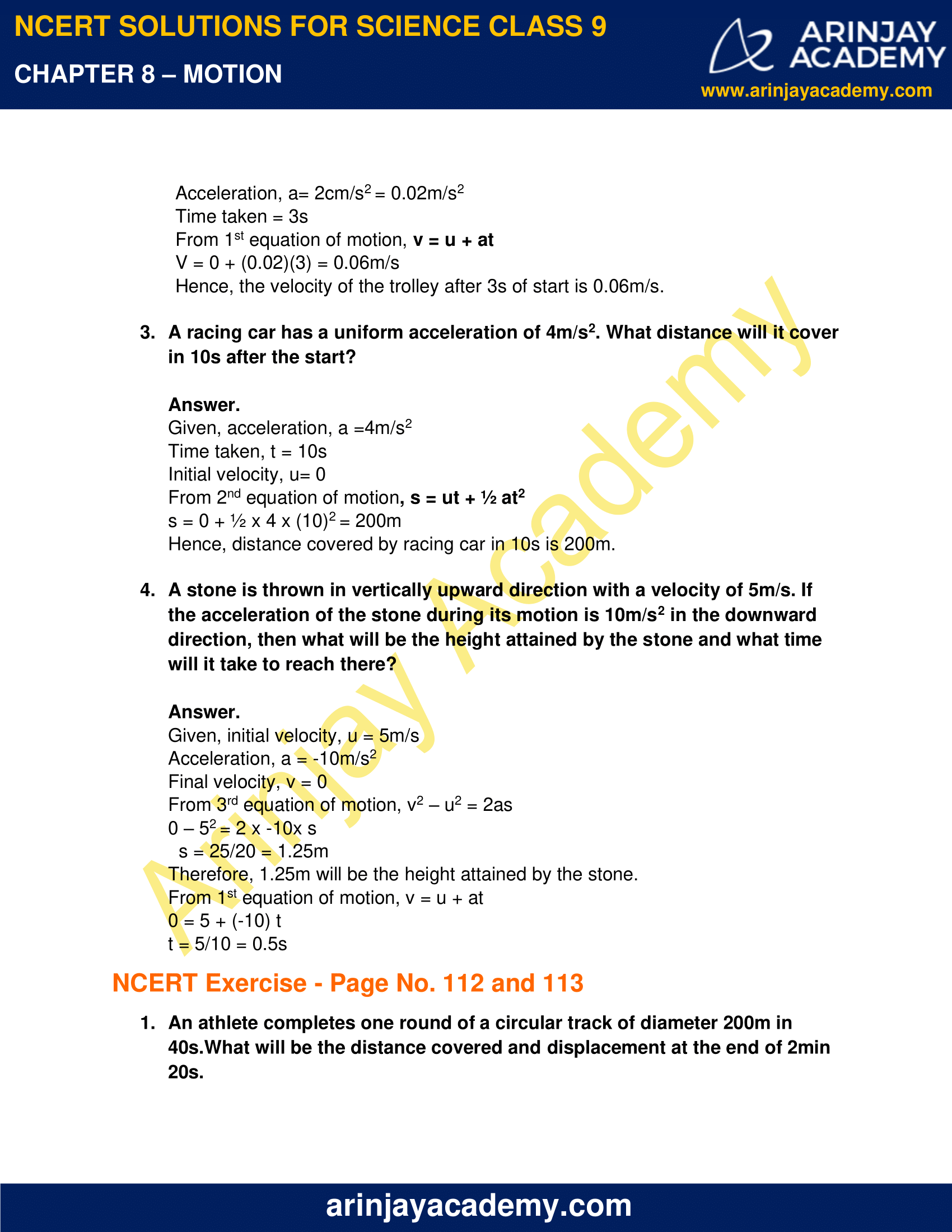 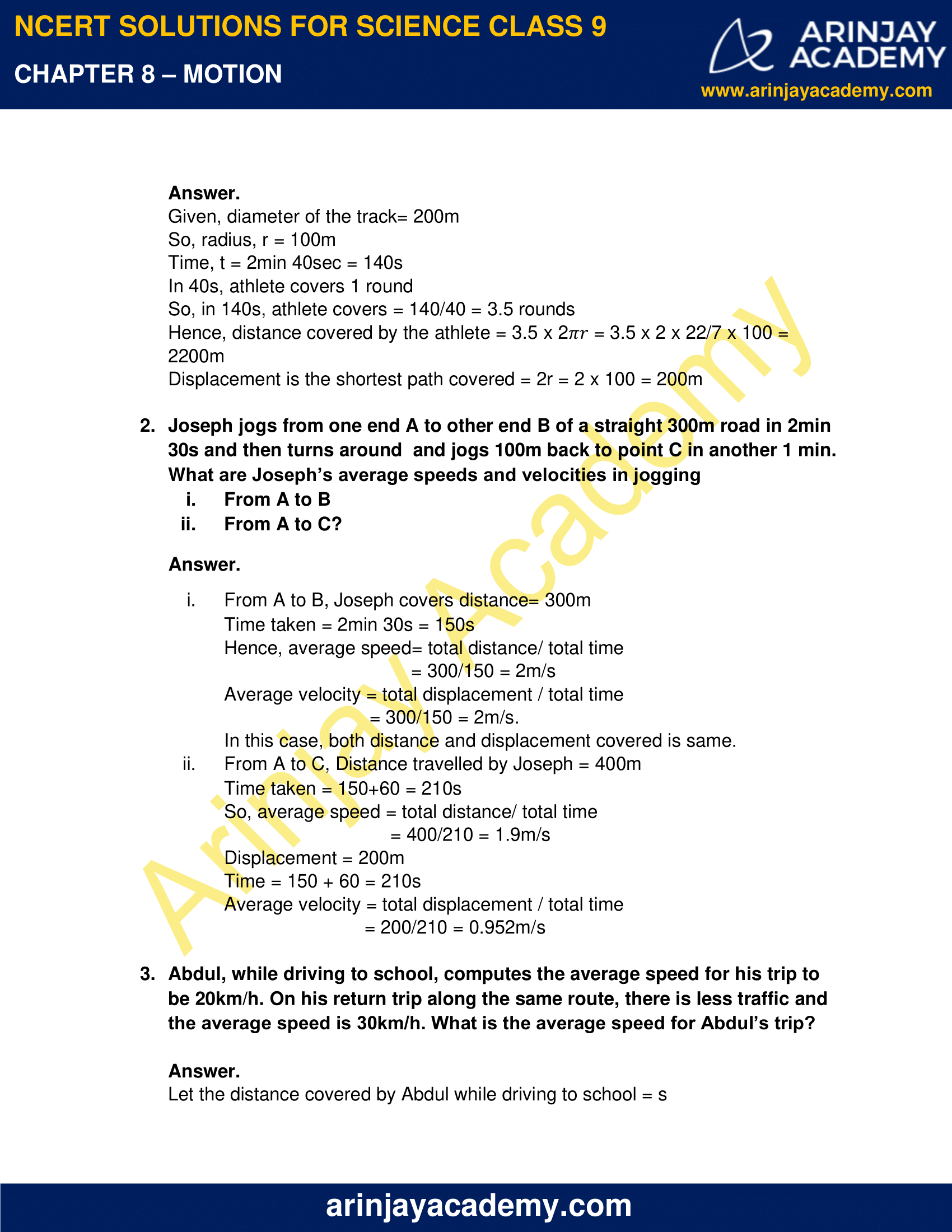 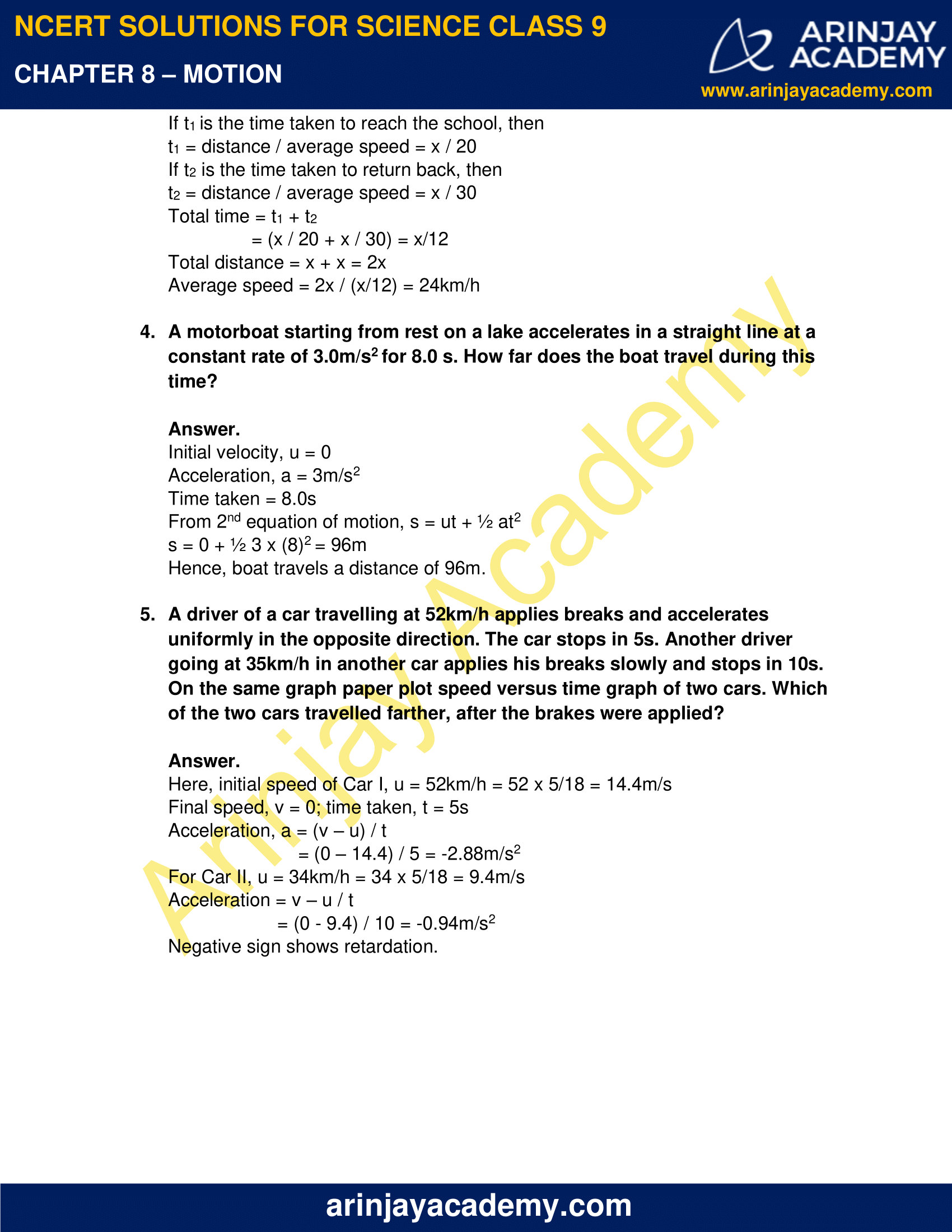 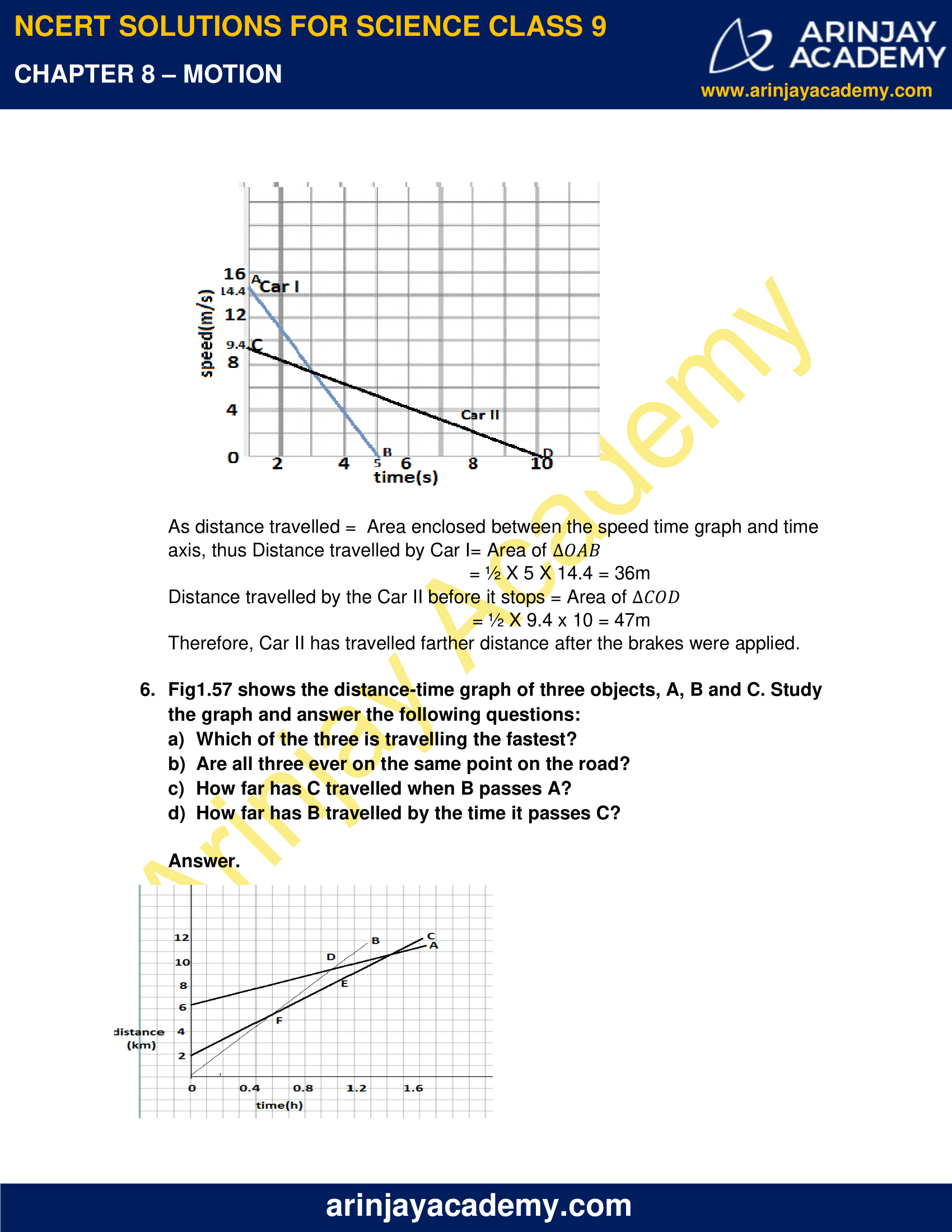 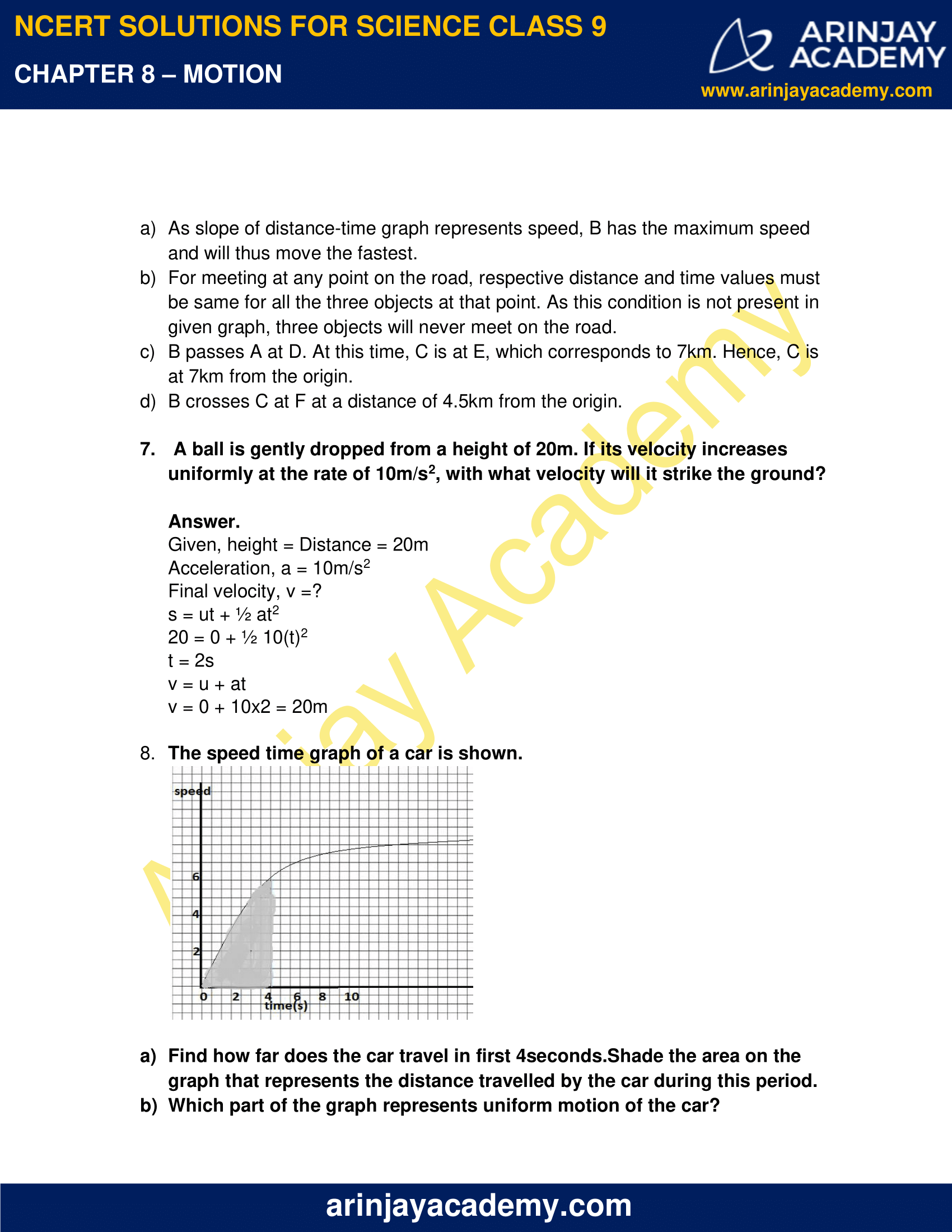 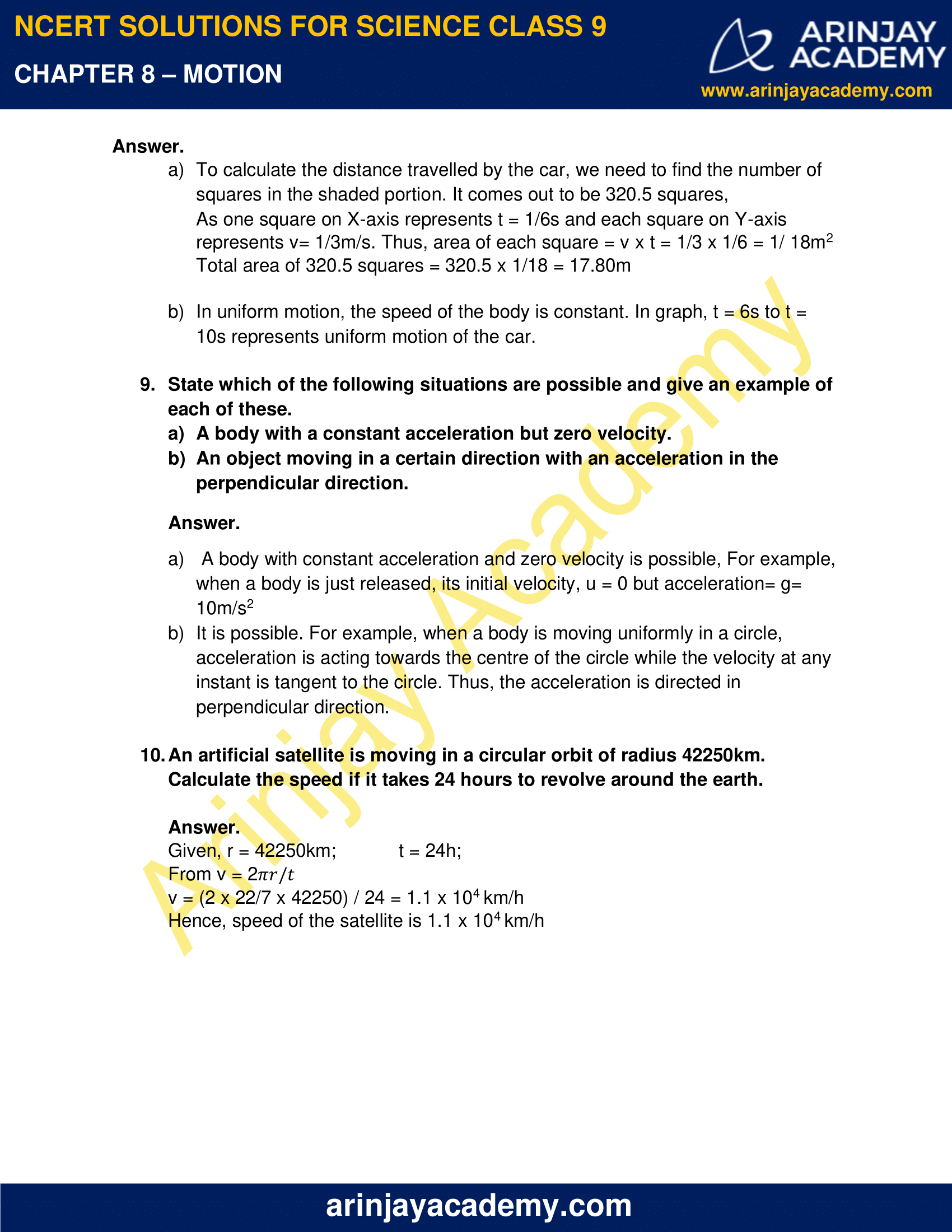 NCERT Solutions for Class 9 Science Chapter 8 – Motion, Exercises includes all in text and exercise solved questions which helps you to understand the topic covered in Chapter 8 Motion, in a better manner to help you to score good marks in your examinations.

1. An object has moved through a distance. Can it have zero displacement? If yes, support your answer with an example.

Yes, an object can have zero displacement even when it has moved through a distance. This happens when final position coincides with the initial position. For example, in going from home to school and coming back to home, some distance is travelled but displacement is zero.

2. A farmer moves around the boundary of a square field of side 10m in 40s. What will be the magnitude of displacement of the farmer at the end of 2 minutes 20 seconds?

ABCD is a square filed of side 10m.

3. What is true for displacement?

a) It cannot be zero.
b) Its magnitude is greater than the distance travelled by the object.

1. Distinguish between speed and velocity.

Velocity is speed in a particular direction. Speed is scalar, but velocity is vector.

2. Under what conditions the magnitude of average velocity of an object is equal to its average speed.

When a body moves in a straight line, the magnitude of average velocity of the    object is equal to its average speed.

3. What does the odometer of an automobile measure?

Odometer of an automobile measures the distance travelled by the vehicle.

4. What does the path of an object look like when it is in uniform motion?

Distance of the spaceship from the ground station

Negative side indicates that the velocity of the bus is decreasing i.e. the bus retards.

3. A train starting from a railway station and moving with uniform acceleration attains a speed of 40km/h in 10 min. Find its acceleration.

Initial velocity of the train, u = 0

1. What is the nature of distance-time graph for uniform and non-uniform motion of an object

The distance time graph for uniform motion of an object is a straight line. 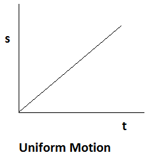 Distance-time graph for non-uniform motion is a curved line.

2. What can you say about the motion of an object whose distance-time graph is a straight line parallel to the time axis?

When the distance time graph is a straight line parallel to the time axis, it indicates that the object is at rest since the position of the object is not changing with time.

3. What can you say about the motion of an object, if the speed-time graph is a straight line parallel to time axis?

4. What is the quantity which is measured by the area occupied below the velocity-time graph?

The area occupied below the velocity-time graph gives the displacement of the object.

1. A bus starting from rest moves with a uniform acceleration of 0.1m/s2 for 2min. Find:

i. The speed acquired
ii. The distance travelled

1. A train is travelling at speed of 90km/h. Brakes are applied, so as to produce a uniform acceleration of -0.5m/s2. Find how far the train will go before it comes to rest.

Train is brought to rest, so final speed, v = 0

Thus, the train will cover a distance of 625m before it is brought to rest.

2. A trolley while going down an inclined plane has an acceleration of 2cm/s2. What will be its velocity 3s after the start?

Given, initial velocity, u= 0

Hence, the velocity of the trolley after 3s of start is 0.06m/s.

3. A racing car has a uniform acceleration of 4m/s2. What distance will it cover in 10s after the start?

4. A stone is thrown in vertically upward direction with a velocity of 5m/s. If the acceleration of the stone during its motion is 10m/s2 in the downward direction, then what will be the height attained by the stone and what time will it take to reach there?

Therefore, 1.25m will be the height attained by the stone.

1. An athlete completes one round of a circular track of diameter 200m in 40s.What will be the distance covered and displacement at the end of 2min 20s.

Given, diameter of the track= 200m

In 40s, athlete covers 1 round

2. Joseph jogs from one end A to other end B of a straight 300m road in 2min 30s and then turns around and jogs 100m back to point C in another 1 min. What are Joseph’s average speeds and velocities in jogging

In this case, both distance and displacement covered is same.

Let the distance covered by Abdul while driving to school = s

If t1 is the time taken to reach the school, then

If t2 is the time taken to return back, then

4. A motorboat starting from rest on a lake accelerates in a straight line at a constant rate of 3.0m/s2 for 8.0 s. How far does the boat travel during this time?

5. A driver of a car travelling at 52km/h applies breaks and accelerates uniformly in the opposite direction. The car stops in 5s. Another driver going at 35km/h in another car applies his breaks slowly and stops in 10s. On the same graph paper plot speed versus time graph of two cars. Which of the two cars travelled farther, after the brakes were applied? 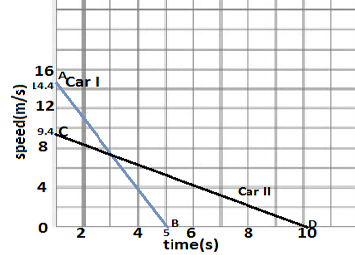 Distance travelled by the Car II before it stops = Area of

Therefore, Car II has travelled farther distance after the brakes were applied.

6. Fig 1.57 shows the distance-time graph of three objects, A, B and C. Study the graph and answer the following questions:

a) Which of the three is travelling the fastest?
b) Are all three ever on the same point on the road?
c) How far has C travelled when B passes A?
d) How far has B travelled by the time it passes C? 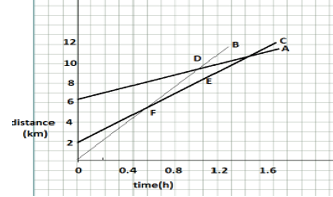 a) As slope of distance-time graph represents speed, B has the maximum speed and will thus move the fastest.

b) For meeting at any point on the road, respective distance and time values must be same for all the three objects at that point. As this condition is not present in given graph, three objects will never meet on the road.

7. A ball is gently dropped from a height of 20m. If its velocity increases uniformly at the rate of 10m/s2, with what velocity will it strike the ground?

8. The speed time graph of a car is shown. 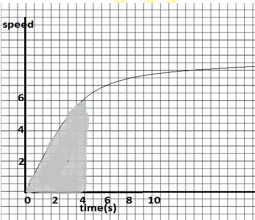 a) Find how far does the car travel in first 4 seconds.Shade the area on the graph that represents the distance travelled by the car during this period.
b) Which part of the graph represents uniform motion of the car?

a) To calculate the distance travelled by the car, we need to find the number of squares in the shaded portion. It comes out to be 320.5 squares,

9. State which of the following situations are possible and give an example of each of these.

a) A body with a constant acceleration but zero velocity.
b) An object moving in a certain direction with an acceleration in the perpendicular direction.

a) A body with constant acceleration and zero velocity is possible, For example, when a body is just released, its initial velocity, u = 0 but acceleration= g= 10m/s2

b) It is possible. For example, when a body is moving uniformly in a circle, acceleration is acting towards the centre of the circle while the velocity at any instant is tangent to the circle. Thus, the acceleration is directed in perpendicular direction.

10. An artificial satellite is moving in a circular orbit of radius 42250km. Calculate the speed if it takes 24 hours to revolve around the earth.