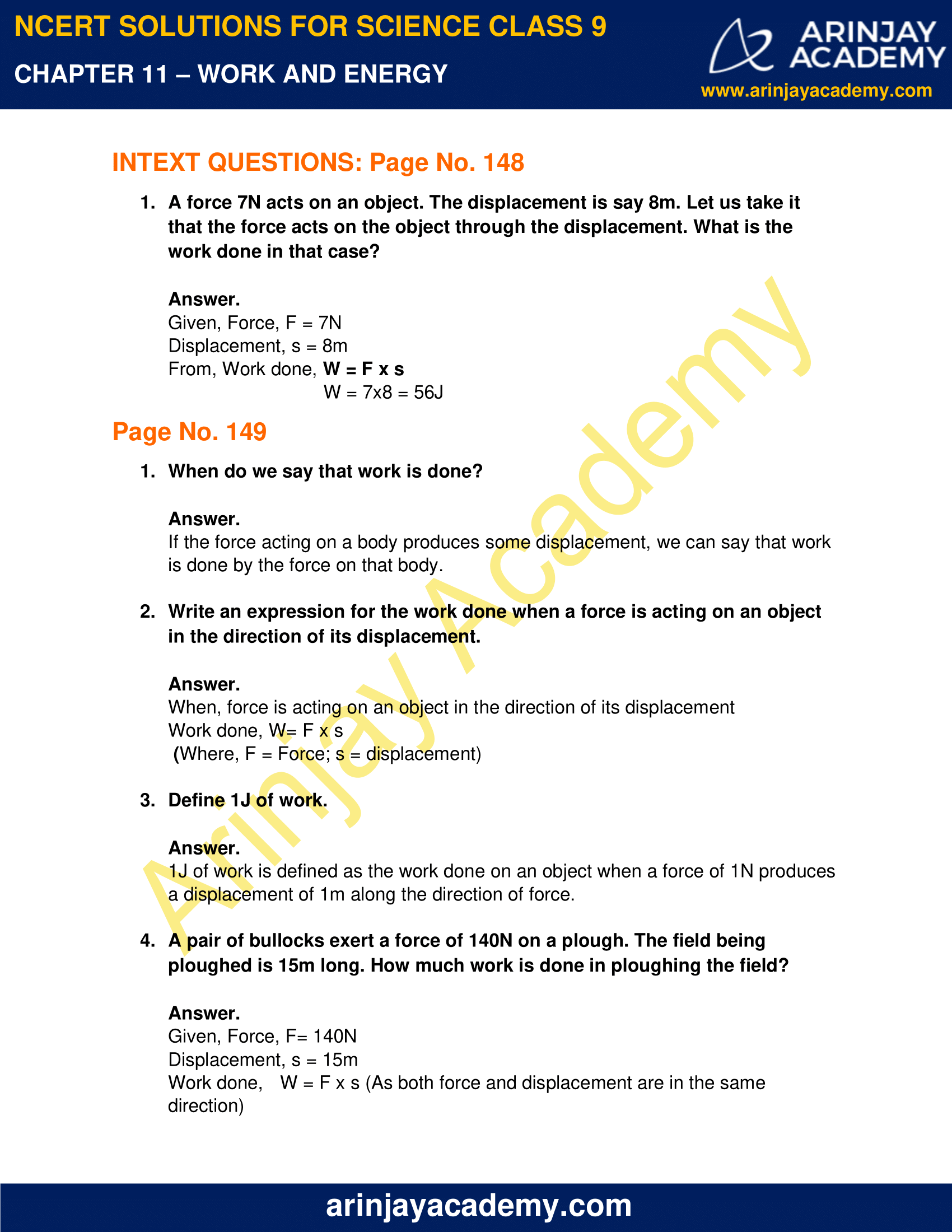 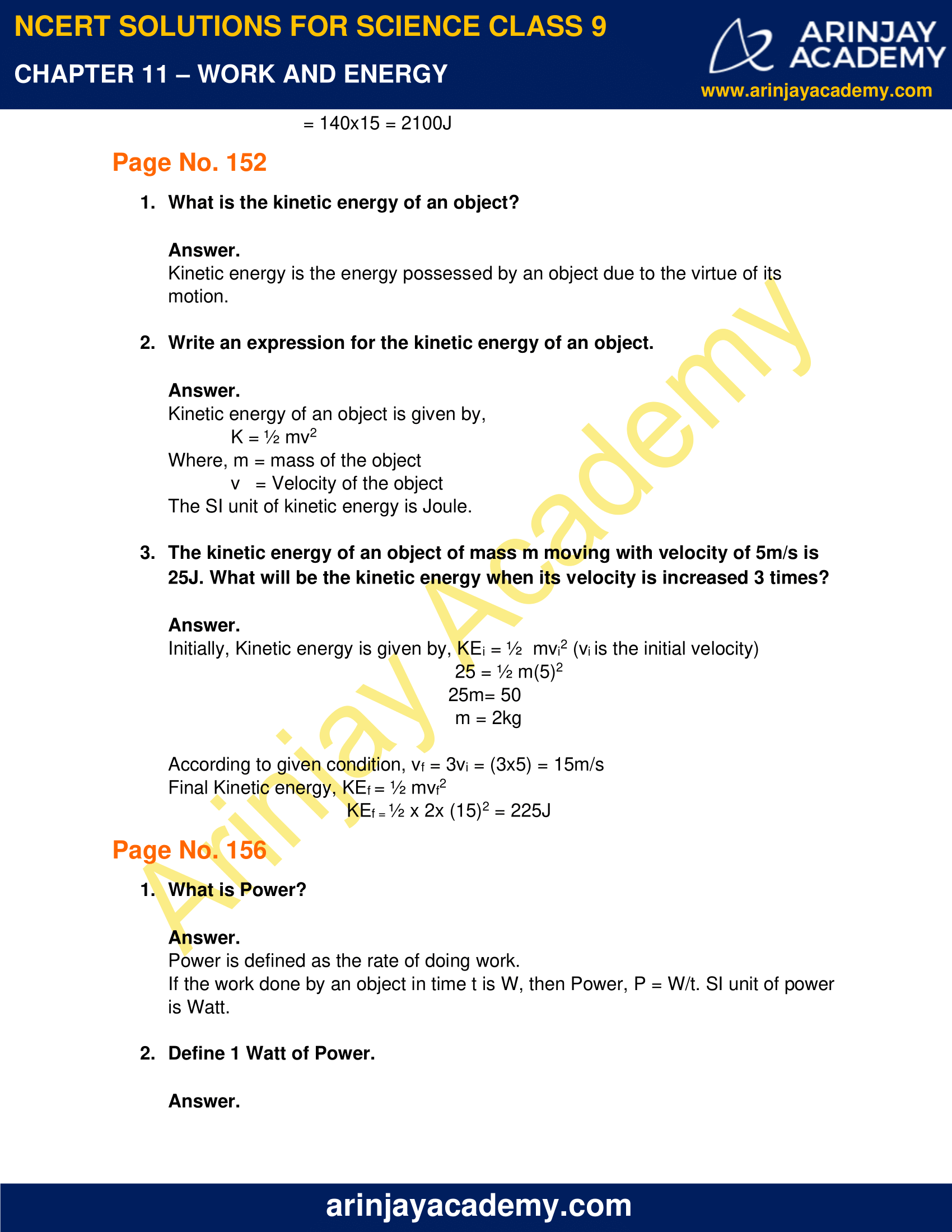 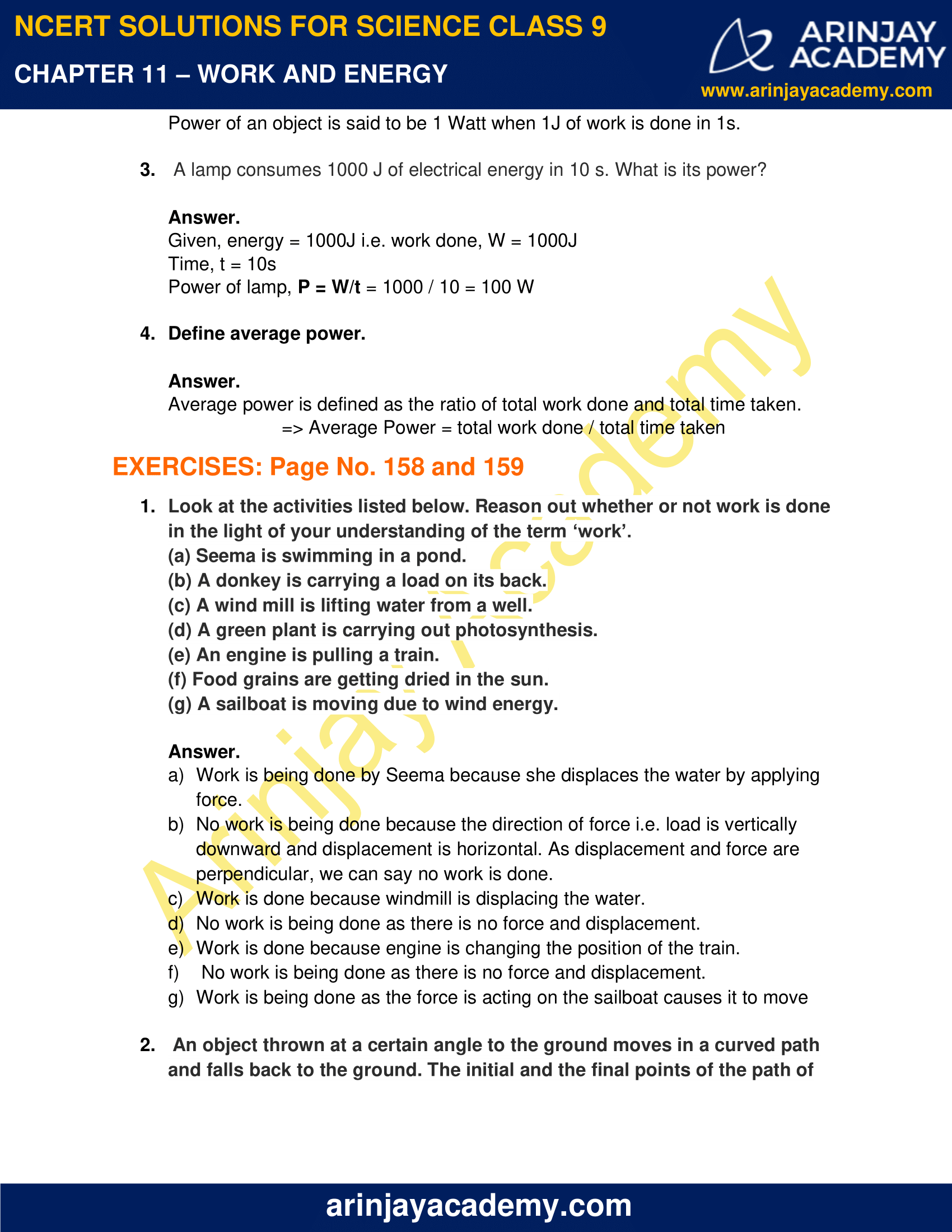 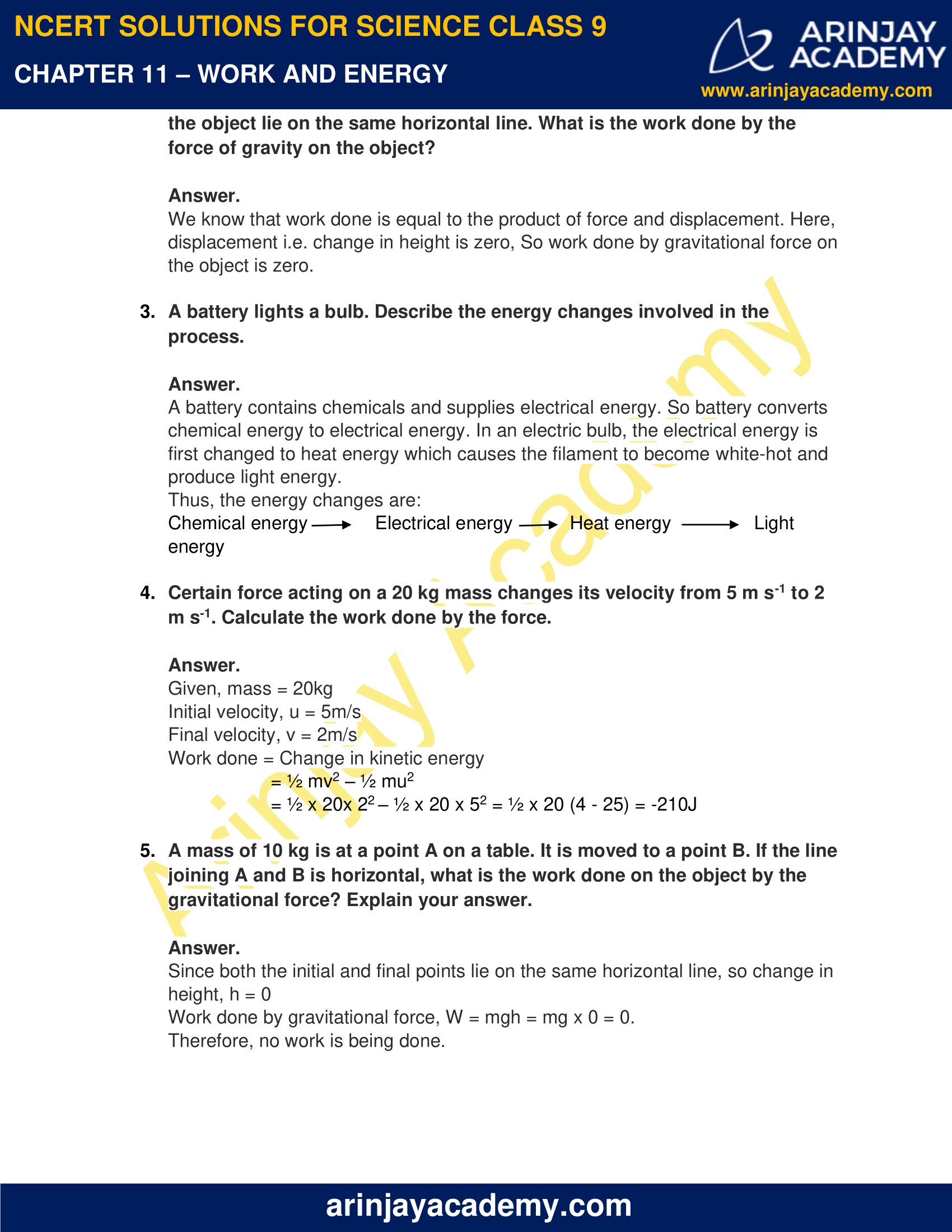 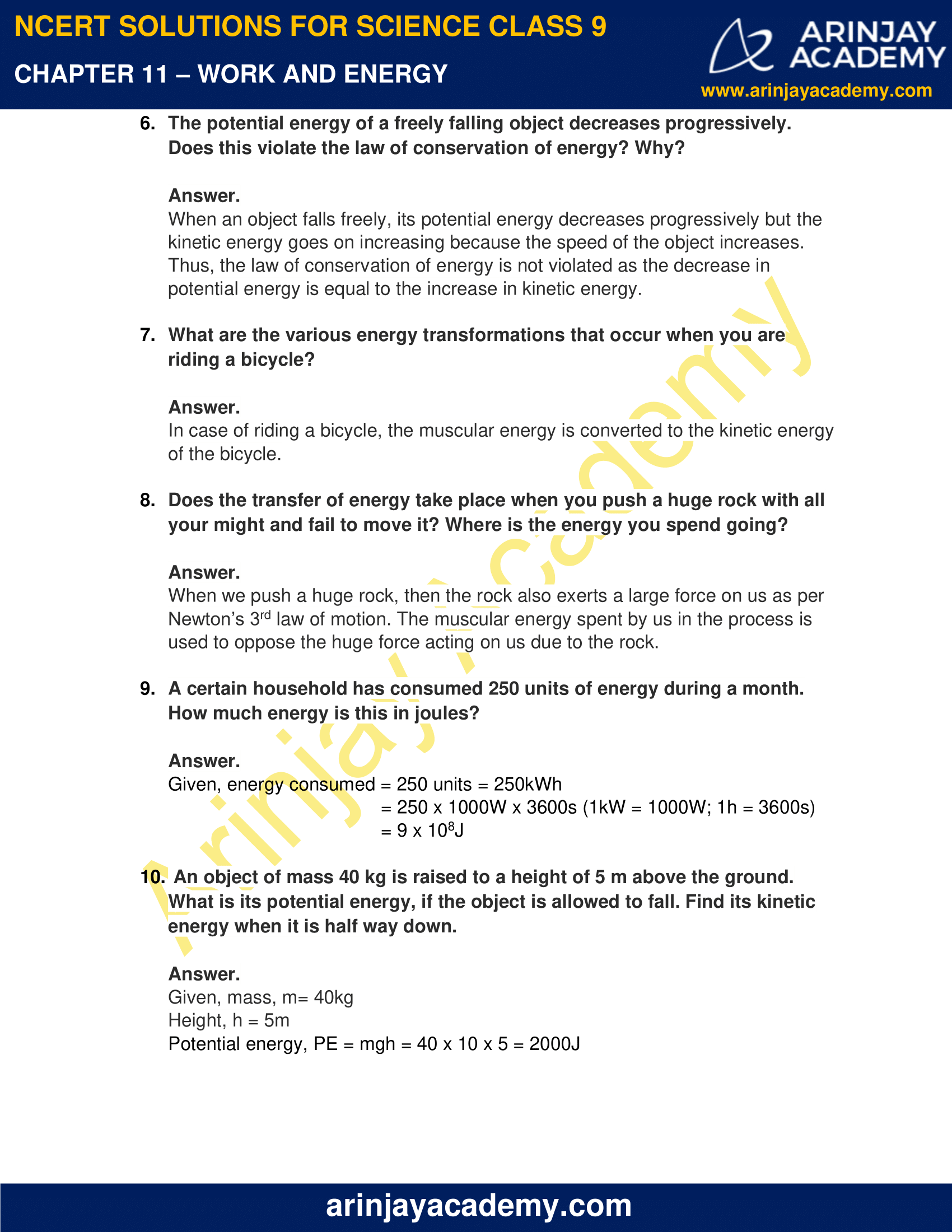 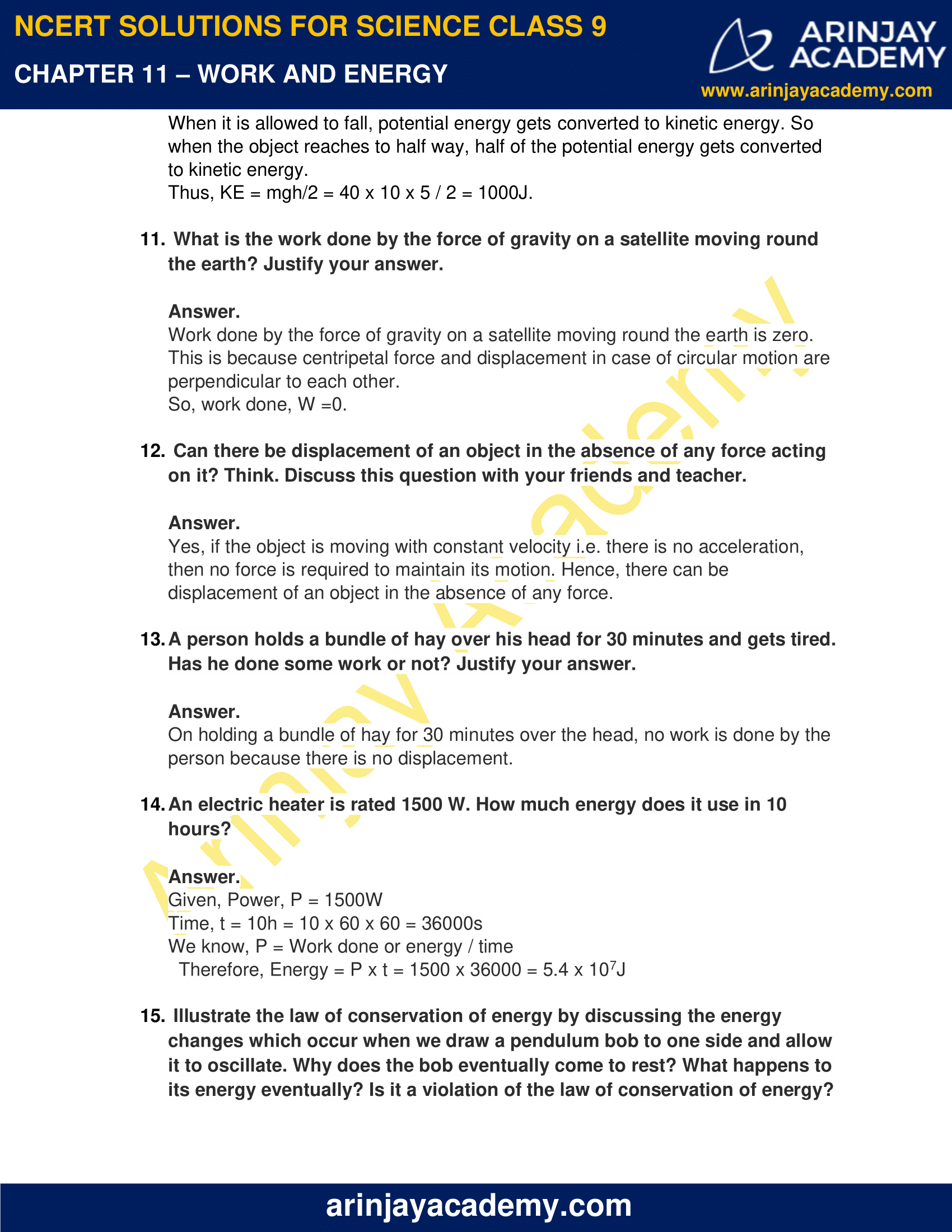 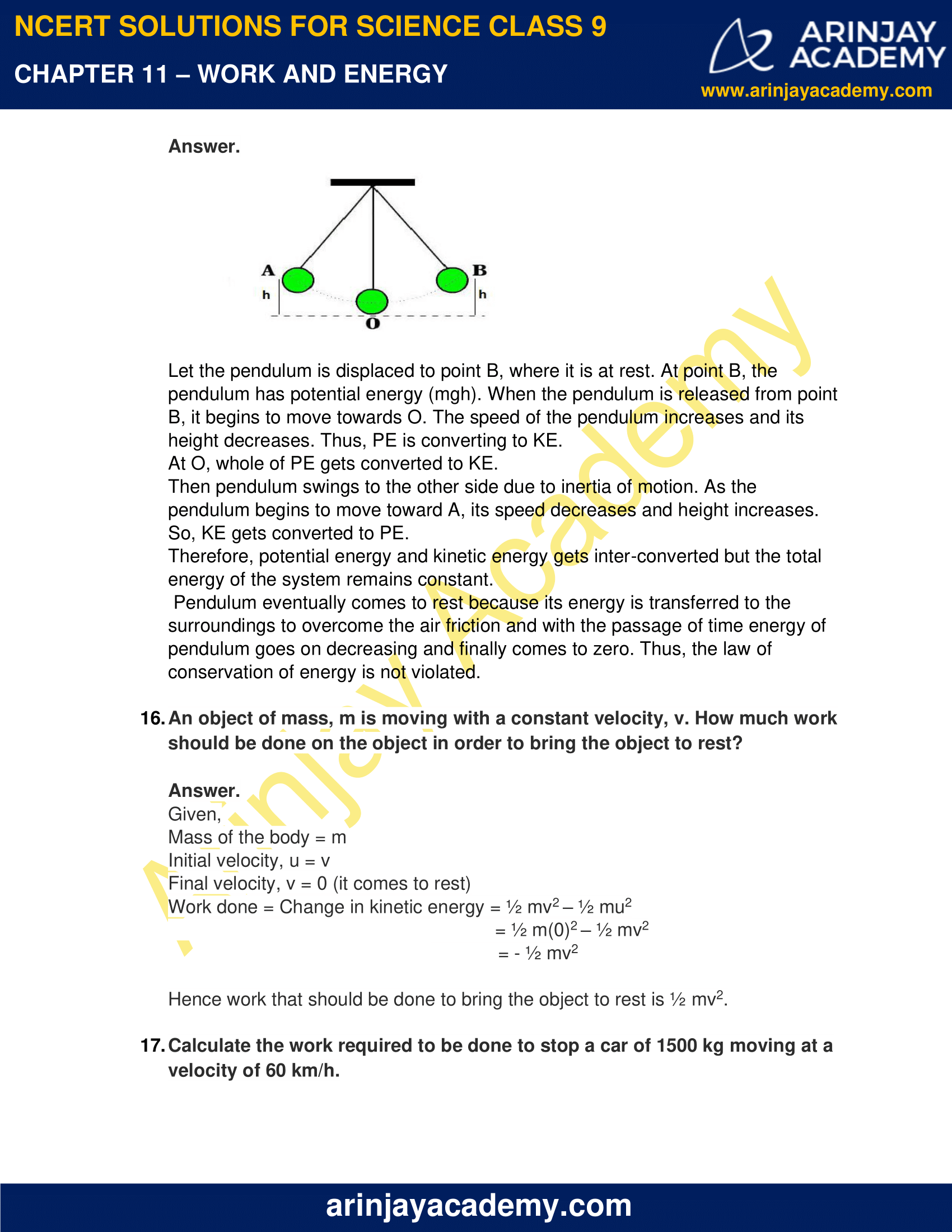 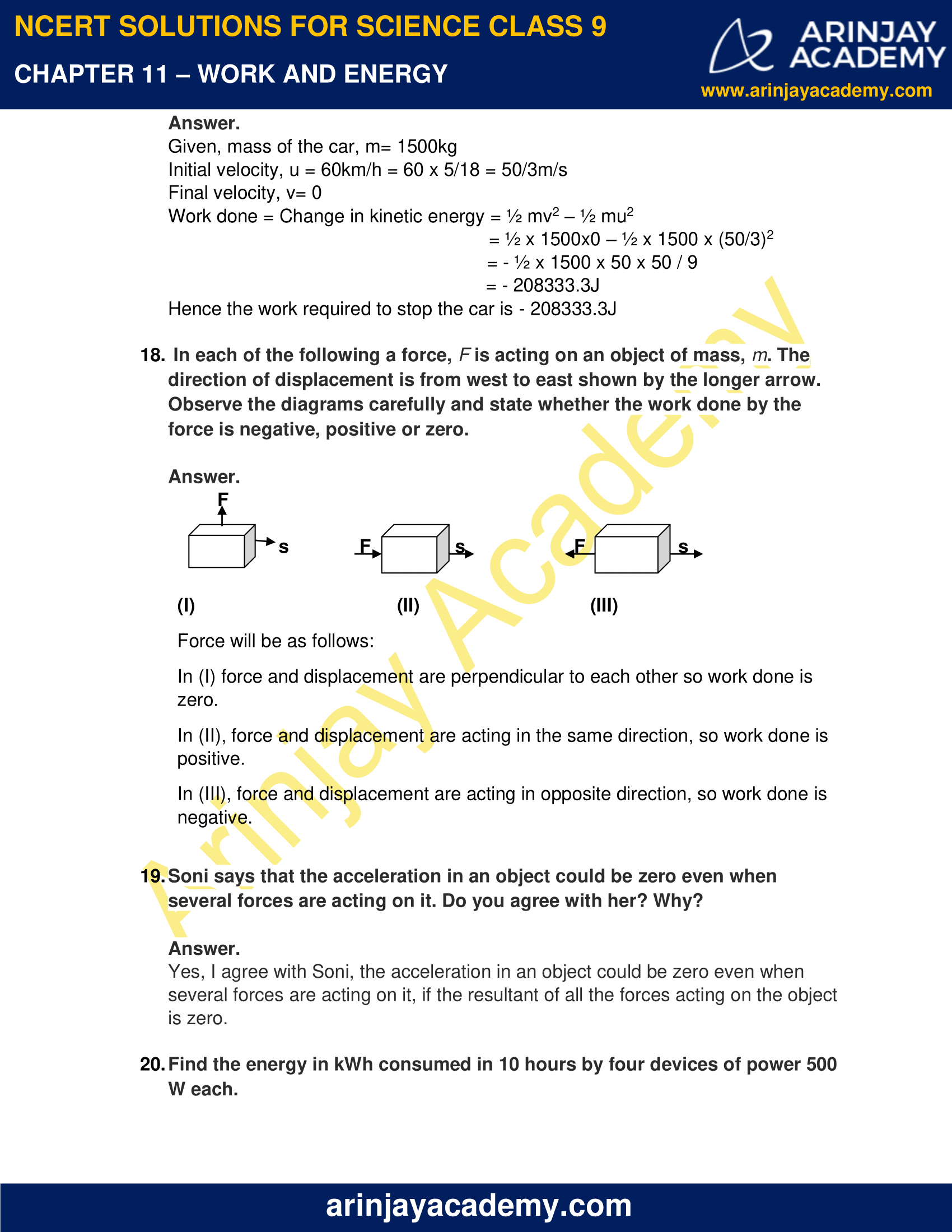 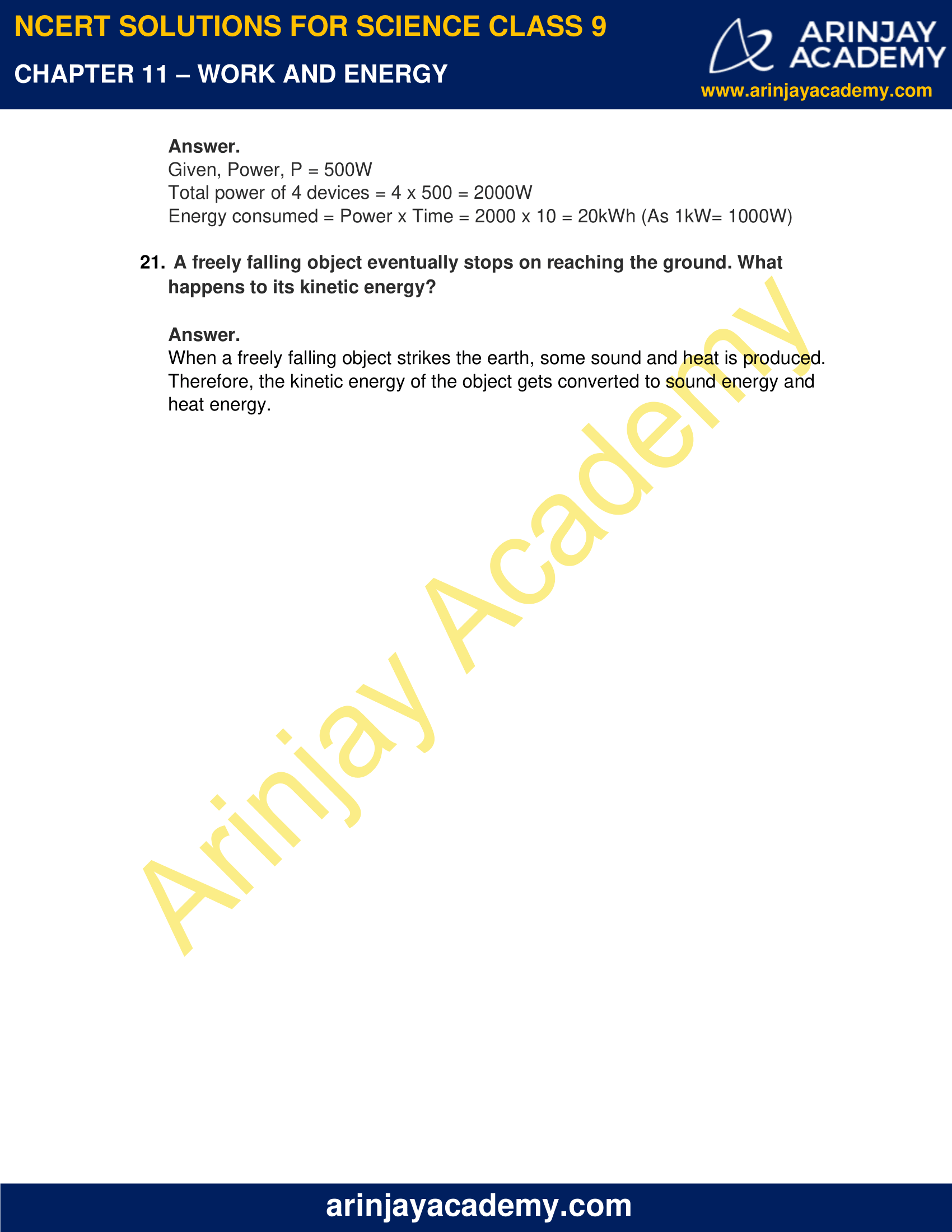 NCERT Solutions for Class 9 Science Chapter 11 – Work and Energy, Exercises includes all in text and exercise solved questions which helps you to understand the topic covered in Chapter 11 Work and Energy, in a better manner to help you to score good marks in your examinations.

1. A force 7N acts on an object. The displacement is say 8m. Let us take it that the force acts on the object through the displacement. What is the work done in that case?

If the force acting on a body produces some displacement, we can say that work is done by the force on that body.

2. Write an expression for the work done when a force is acting on an object in the direction of its displacement.

When, force is acting on an object in the direction of its displacement

1J of work is defined as the work done on an object when a force of 1N produces a displacement of 1m along the direction of force.

4. A pair of bullocks exert a force of 140N on a plough. The field being ploughed is 15m long. How much work is done in ploughing the field?

Work done,   W = F x s (As both force and displacement are in the same direction)

1. What is the kinetic energy of an object?

Kinetic energy is the energy possessed by an object due to the virtue of its motion.

2. Write an expression for the kinetic energy of an object.

Kinetic energy of an object is given by,

Where, m = mass of the object

v = Velocity of the object

The SI unit of kinetic energy is Joule.

Initially, Kinetic energy is given by, KEi = ½  mvi2 (vi is the initial velocity)

Power is defined as the rate of doing work.

Power of an object is said to be 1 Watt when 1J of work is done in 1s.

Average power is defined as the ratio of total work done and total time taken.

1. Look at the activities listed below. Reason out whether or not work is done in the light of your understanding of the term ‘work’.
(a) Seema is swimming in a pond.
(b) A donkey is carrying a load on its back.
(c) A wind mill is lifting water from a well.
(d) A green plant is carrying out photosynthesis.
(e) An engine is pulling a train.
(f) Food grains are getting dried in the sun.
(g) A sailboat is moving due to wind energy.

2. An object thrown at a certain angle to the ground moves in a curved path and falls back to the ground. The initial and the final points of the path of the object lie on the same horizontal line. What is the work done by the force of gravity on the object?

We know that work done is equal to the product of force and displacement. Here, displacement i.e. change in height is zero, So work done by gravitational force on the object is zero.

3. A battery lights a bulb. Describe the energy changes involved in the process.

Thus, the energy changes are:

5. A mass of 10 kg is at a point A on a table. It is moved to a point B. If the line joining A and B is horizontal, what is the work done on the object by the gravitational force? Explain your answer.

Since both the initial and final points lie on the same horizontal line, so change in height, h = 0

Therefore, no work is being done.

6. The potential energy of a freely falling object decreases progressively. Does this violate the law of conservation of energy? Why?

7. What are the various energy transformations that occur when you are riding a bicycle?

In case of riding a bicycle, the muscular energy is converted to the kinetic energy of the bicycle.

8. Does the transfer of energy take place when you push a huge rock with all your might and fail to move it? Where is the energy you spend going?

When we push a huge rock, then the rock also exerts a large force on us as per Newton’s 3rd law of motion. The muscular energy spent by us in the process is used to oppose the huge force acting on us due to the rock.

9. A certain household has consumed 250 units of energy during a month. How much energy is this in joules?

10. An object of mass 40 kg is raised to a height of 5 m above the ground. What is its potential energy, if the object is allowed to fall. Find its kinetic energy when it is half way down.

11. What is the work done by the force of gravity on a satellite moving round the earth? Justify your answer.

Work done by the force of gravity on a satellite moving round the earth is zero. This is because centripetal force and displacement in case of circular motion are perpendicular to each other.

12. Can there be displacement of an object in the absence of any force acting on it? Think. Discuss this question with your friends and teacher.

Yes, if the object is moving with constant velocity i.e. there is no acceleration, then no force is required to maintain its motion. Hence, there can be displacement of an object in the absence of any force.

13. A person holds a bundle of hay over his head for 30 minutes and gets tired. Has he done some work or not? Justify your answer.

On holding a bundle of hay for 30 minutes over the head, no work is done by the person because there is no displacement. 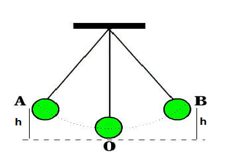 At O, whole of PE gets converted to KE.

Then pendulum swings to the other side due to inertia of motion. As the pendulum begins to move toward A, its speed decreases and height increases. So, KE gets converted to PE.

Therefore, potential energy and kinetic energy gets inter-converted but the total energy of the system remains constant.

Pendulum eventually comes to rest because its energy is transferred to the surroundings to overcome the air friction and with the passage of time energy of pendulum goes on decreasing and finally comes to zero. Thus, the law of conservation of energy is not violated.

16. An object of mass, m is moving with a constant velocity, v. How much work should be done on the object in order to bring the object to rest?

Mass of the body = m

Hence work that should be done to bring the object to rest is ½ mv2.

18. In each of the following a force, F is acting on an object of mass, m. The direction of displacement is from west to east shown by the longer arrow. Observe the diagrams carefully and state whether the work done by the force is negative, positive or zero.

Force will be as follows:

In (I) force and displacement are perpendicular to each other so work done is zero.

In (II), force and displacement are acting in the same direction, so work done is positive.

In (III), force and displacement are acting in opposite direction, so work done is negative.

19. Soni says that the acceleration in an object could be zero even when several forces are acting on it. Do you agree with her? Why?

Yes, I agree with Soni, the acceleration in an object could be zero even when several forces are acting on it, if the resultant of all the forces acting on the object is zero.

21. A freely falling object eventually stops on reaching the ground. What happens to its kinetic energy?

When a freely falling object strikes the earth, some sound and heat is produced. Therefore, the kinetic energy of the object gets converted to sound energy and heat energy.