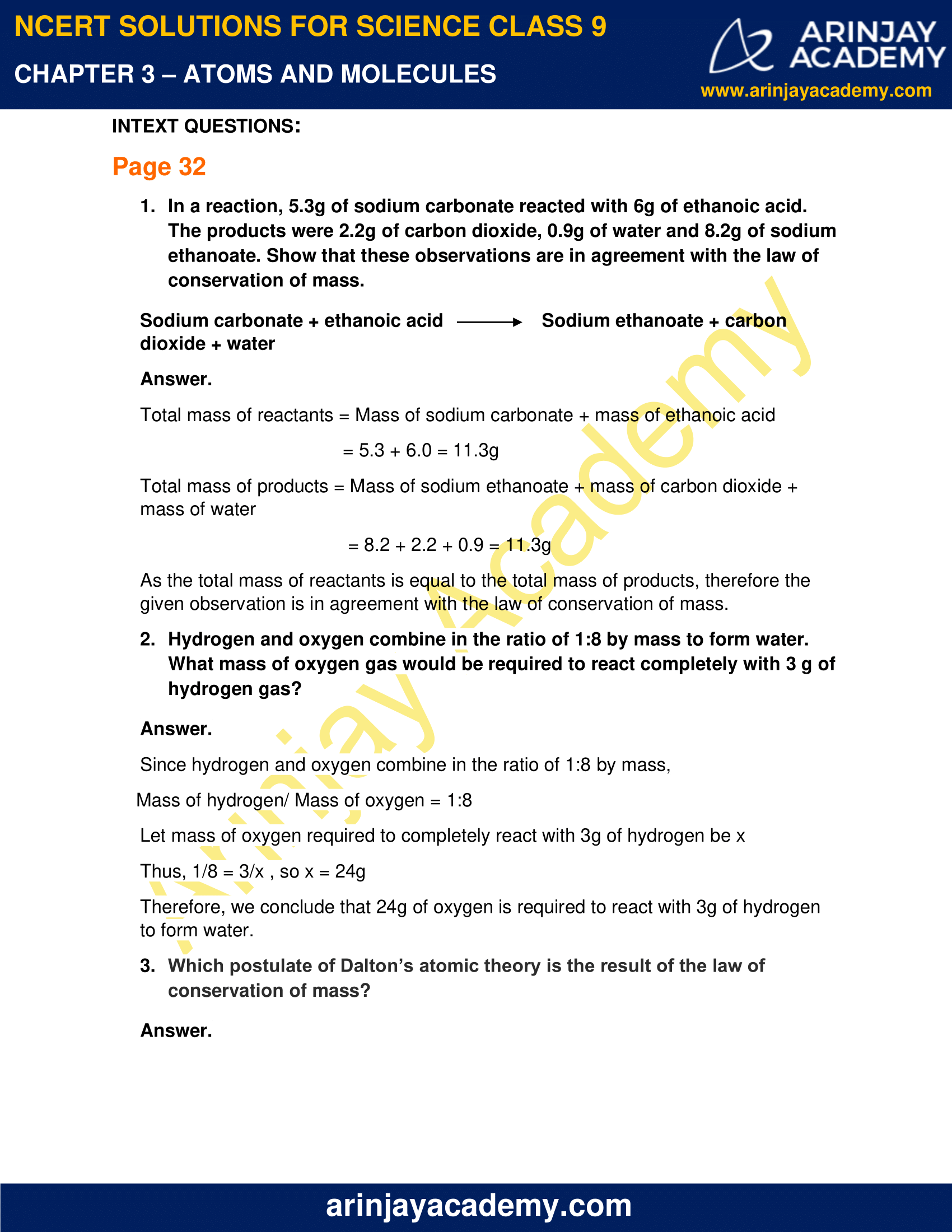 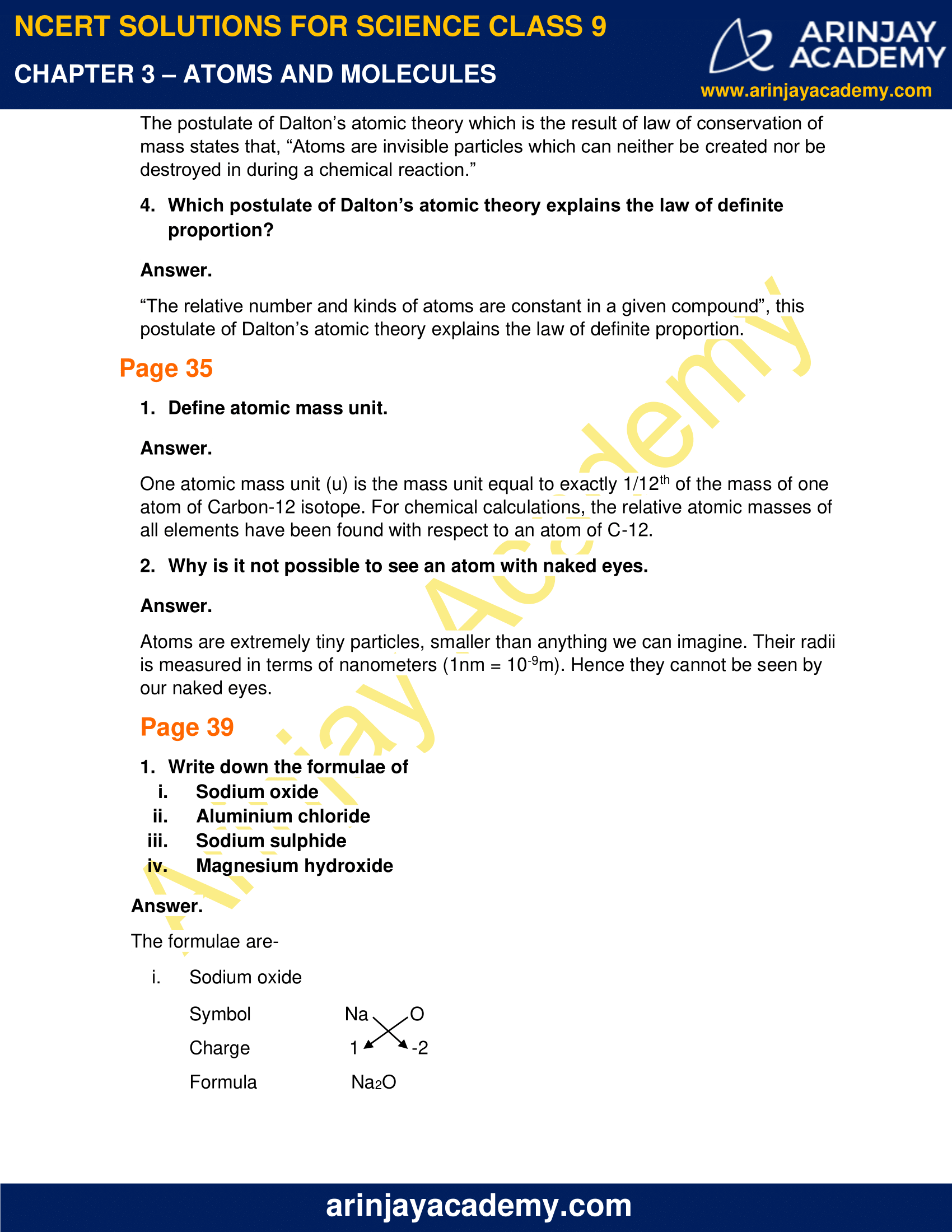 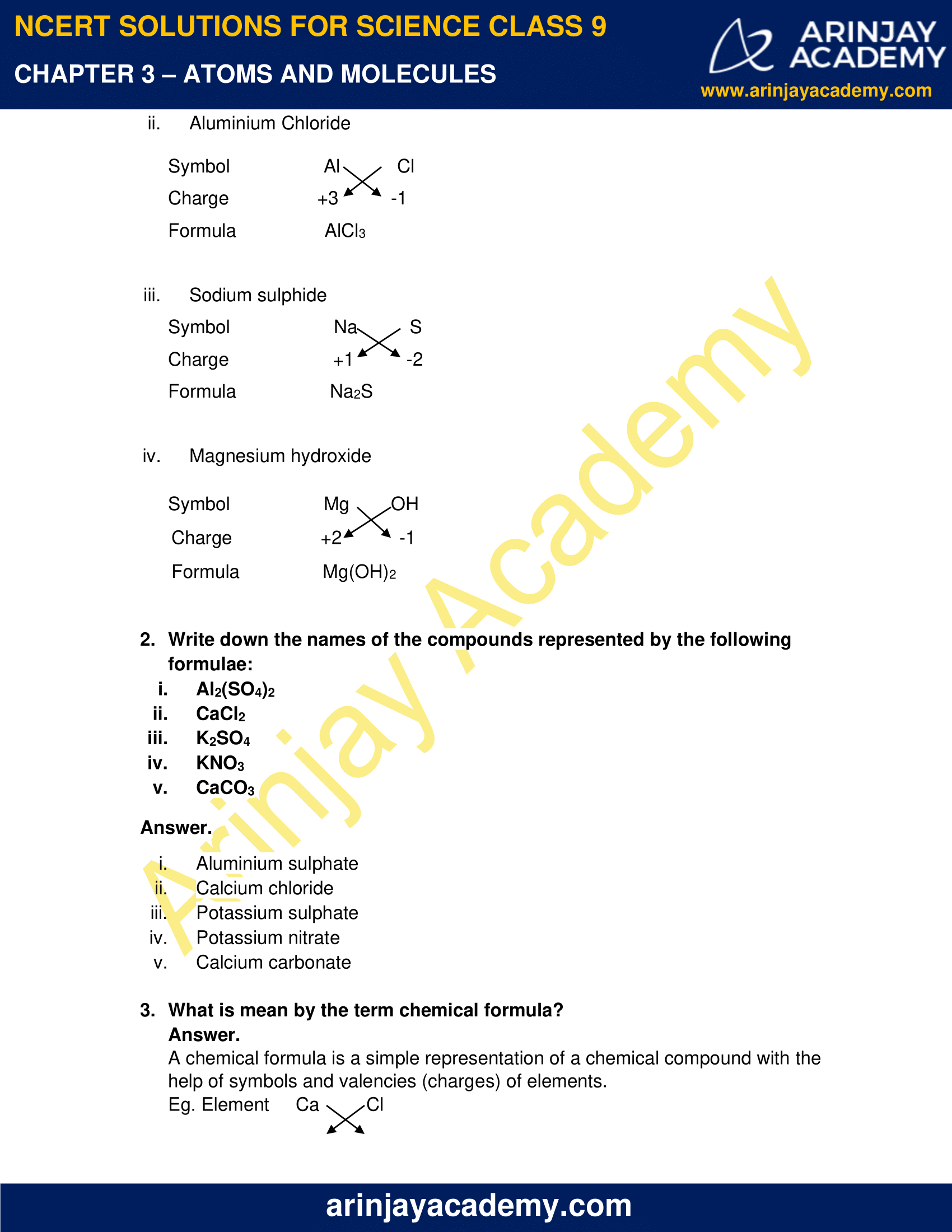 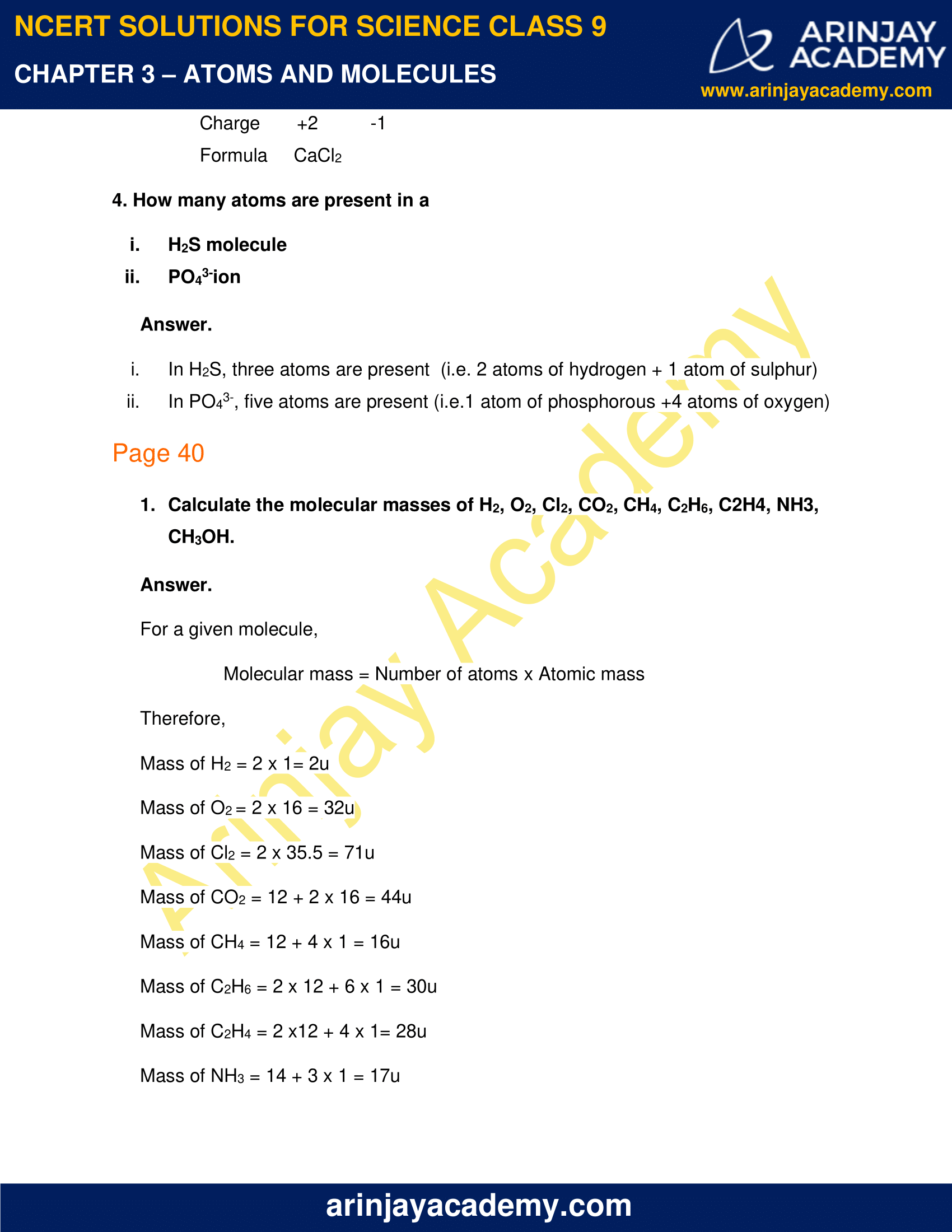 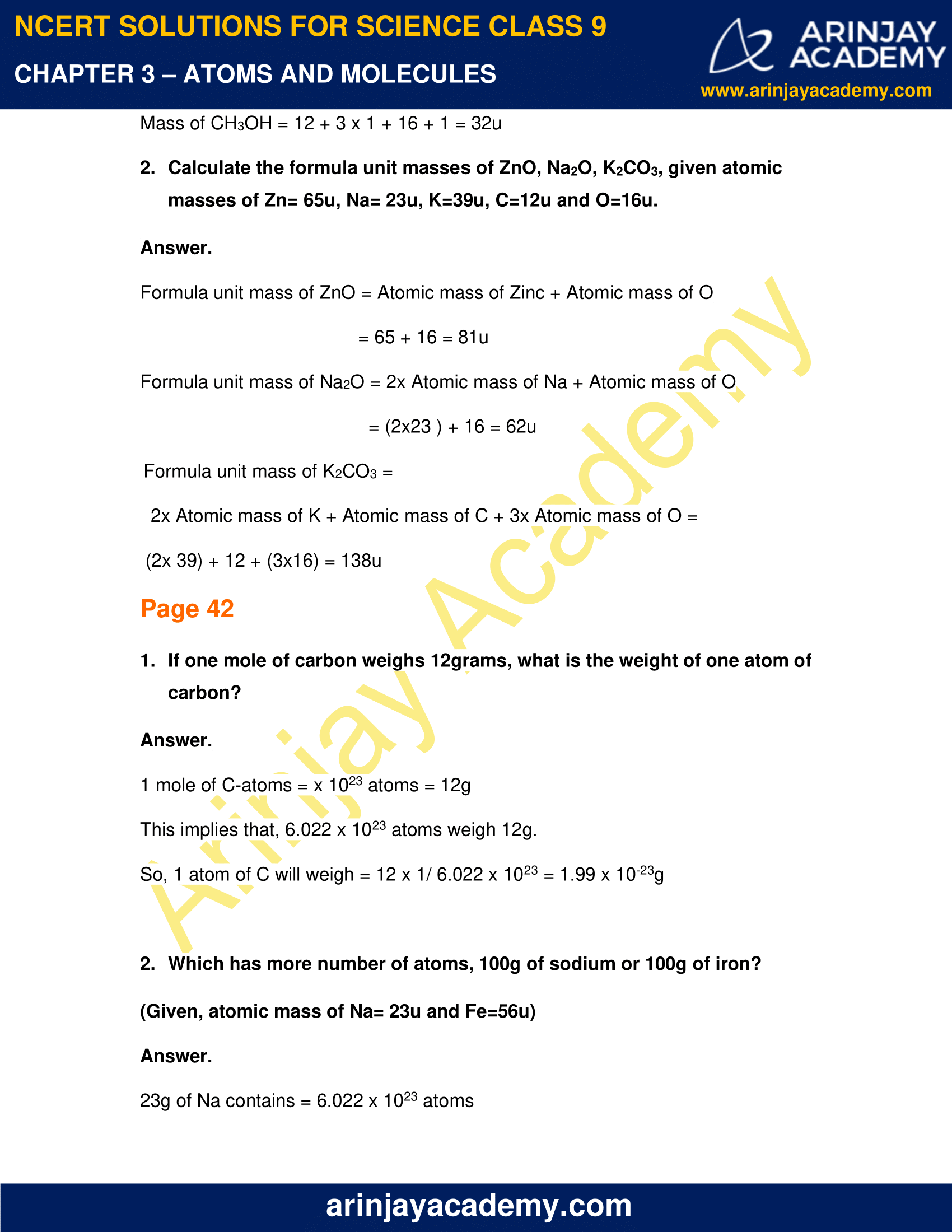 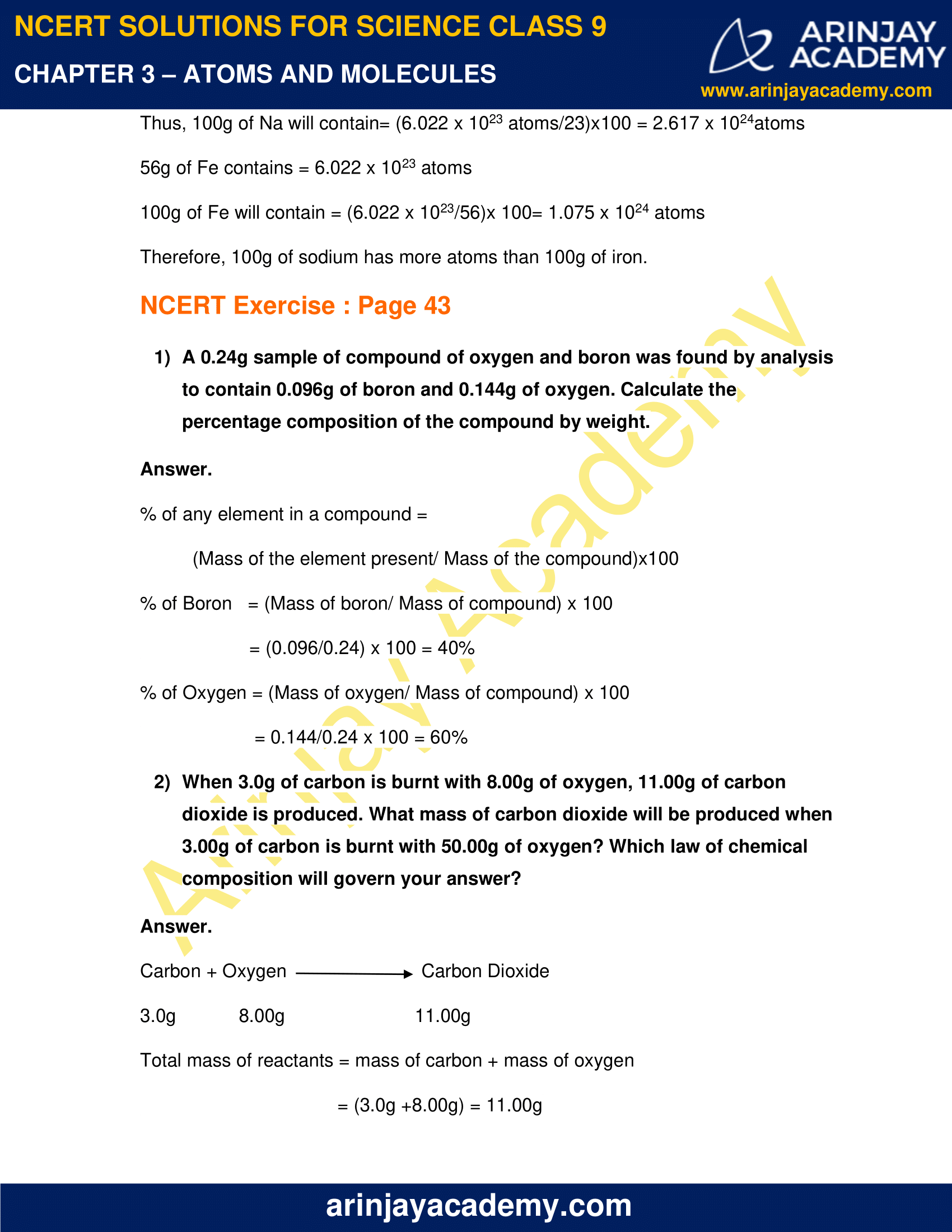 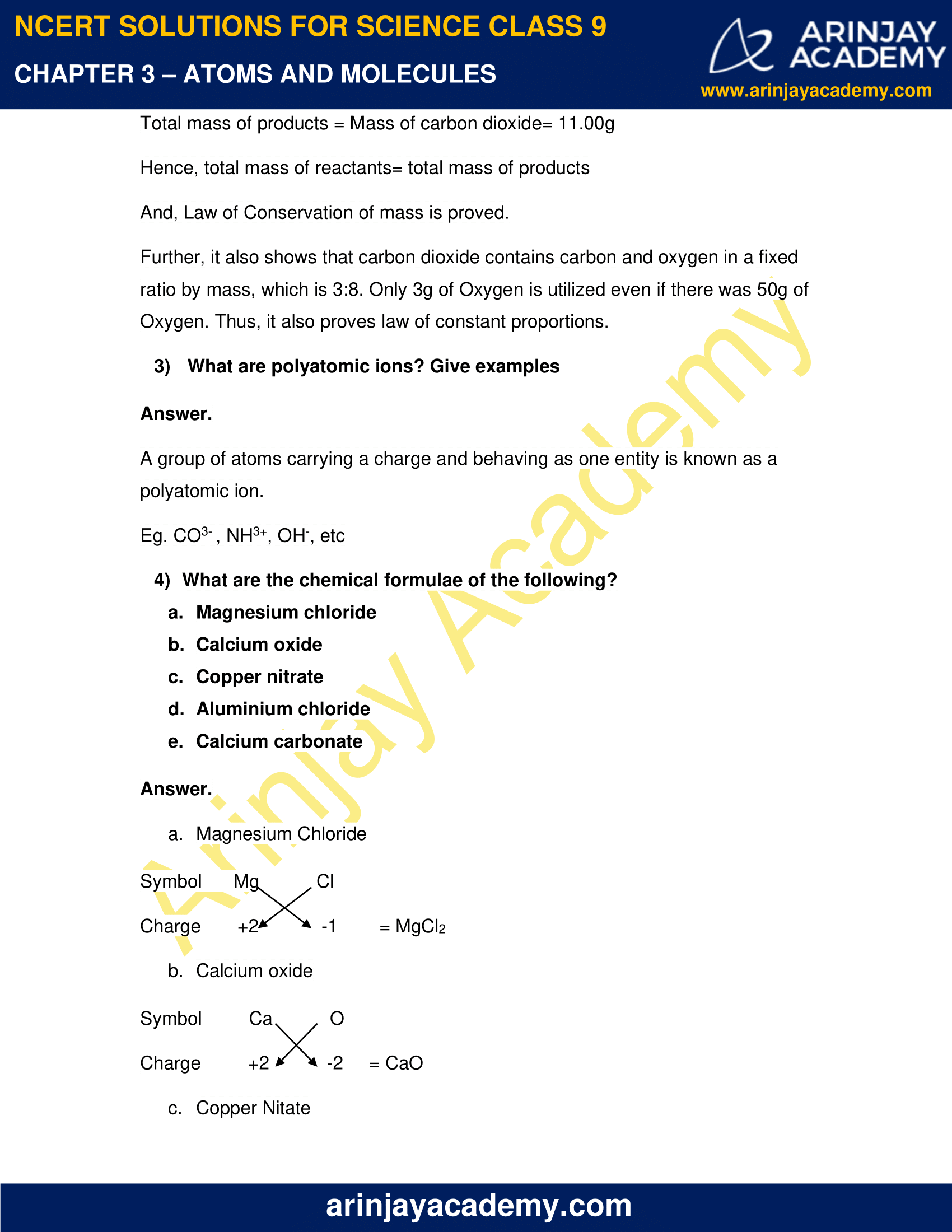 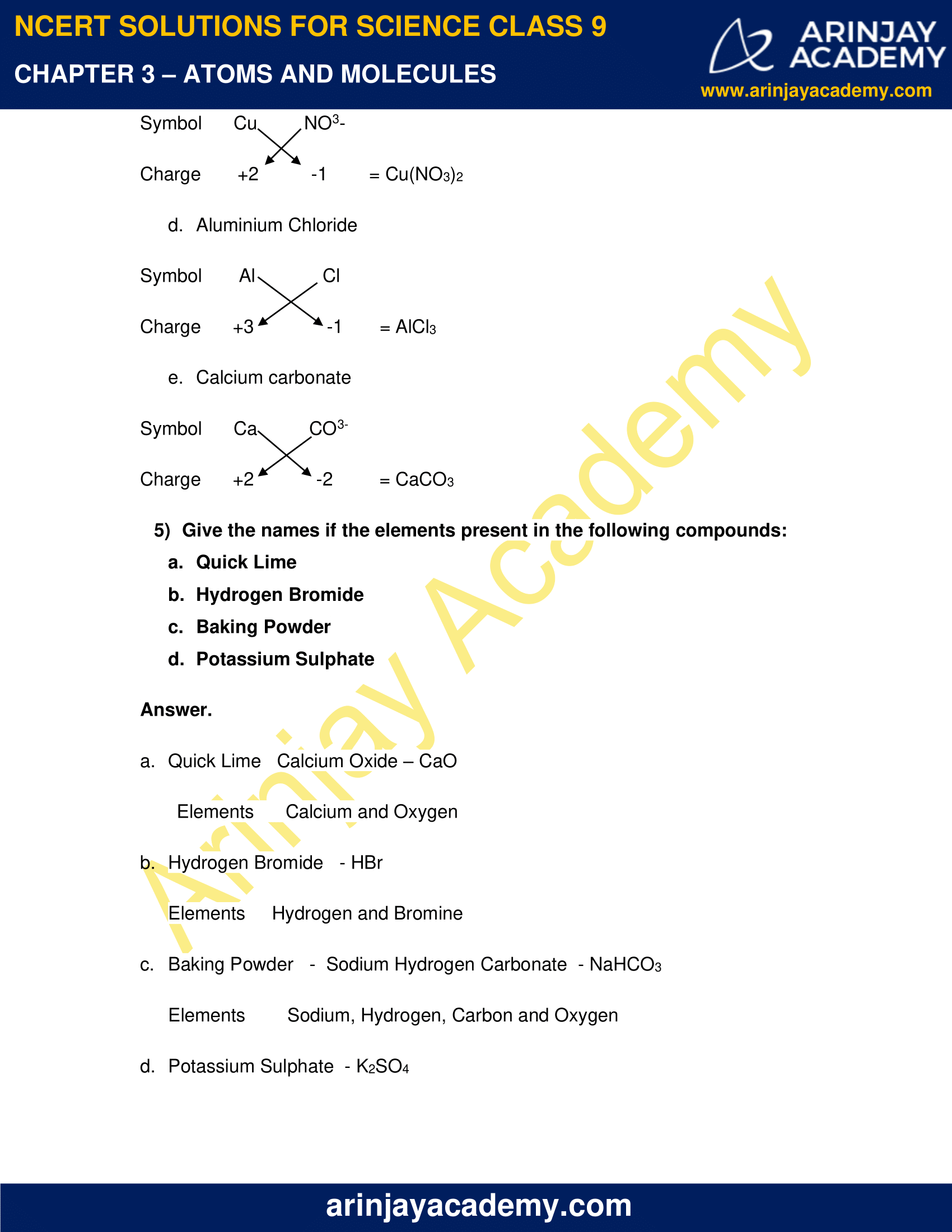 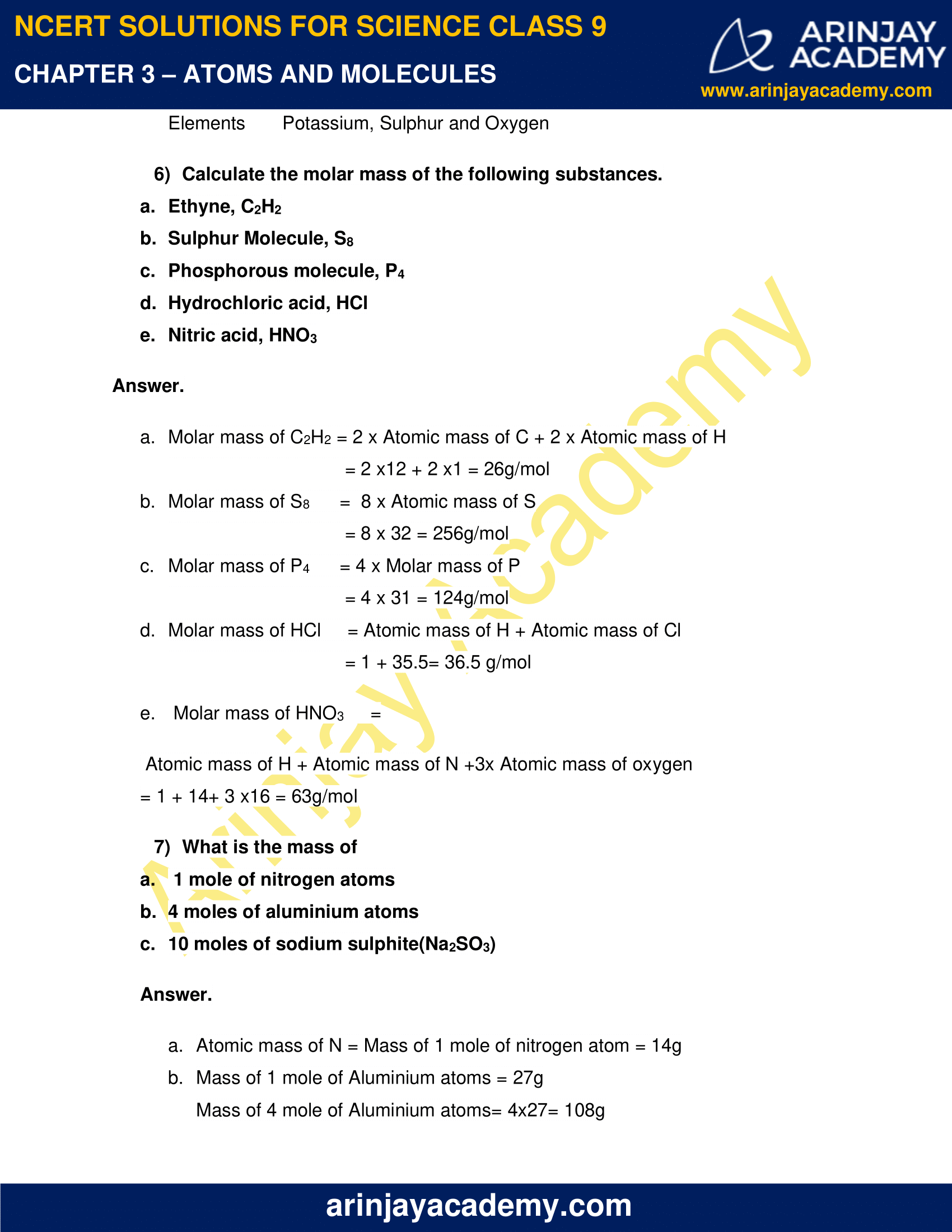 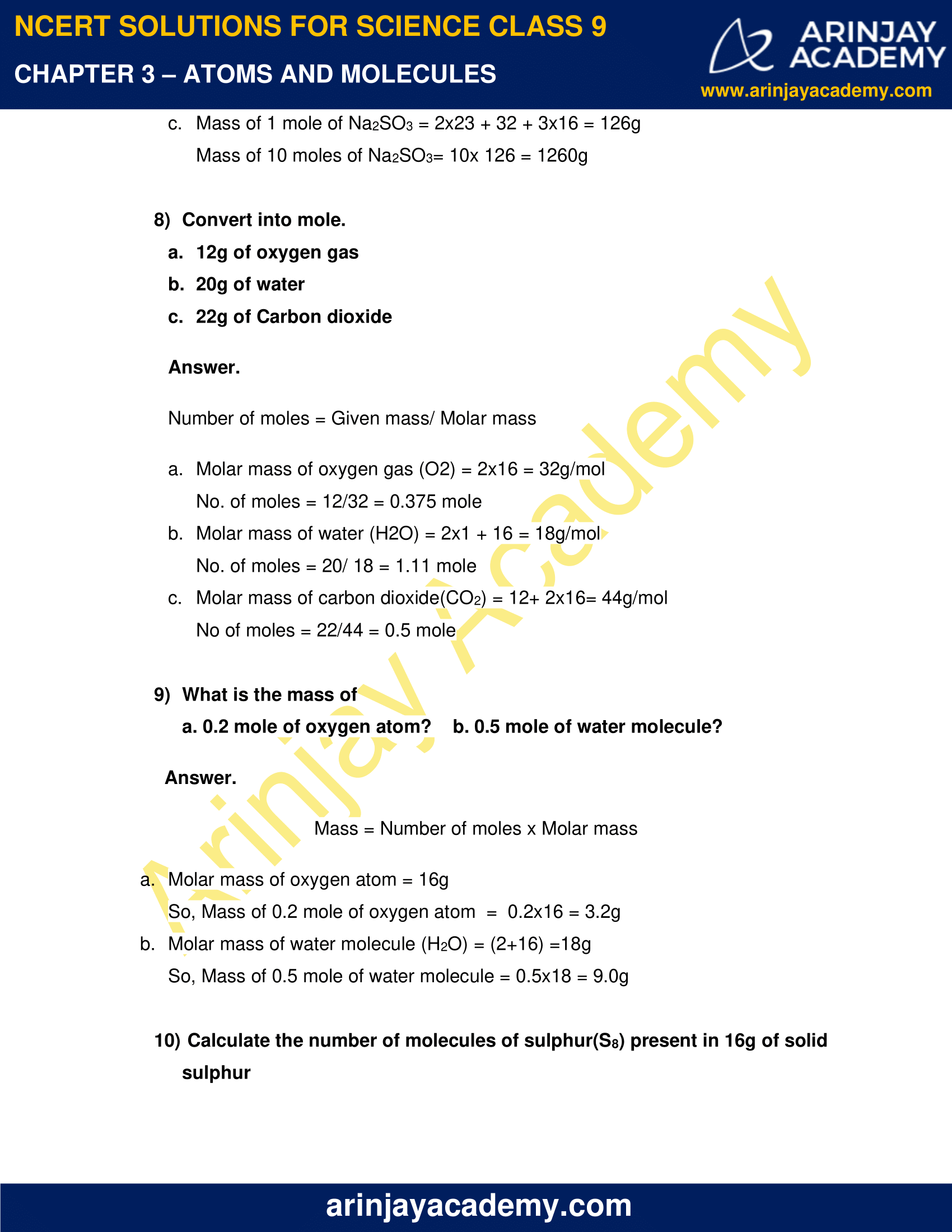 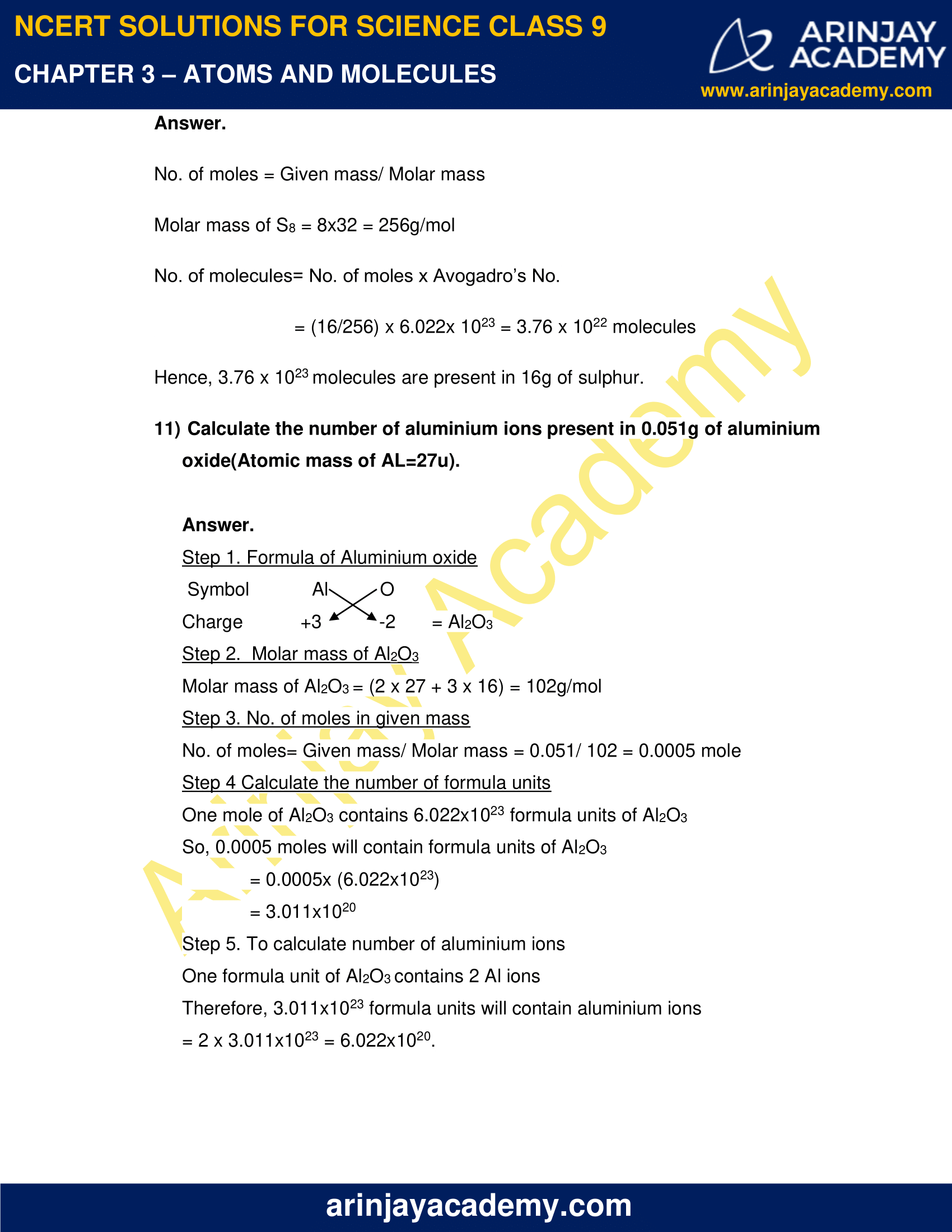 1. In a reaction, 5.3g of sodium carbonate reacted with 6g of ethanoic acid. The products were 2.2g of carbon dioxide, 0.9g of water and 8.2g of sodium ethanoate. Show that these observations are in agreement with the law of conservation of mass.

2. Hydrogen and oxygen combine in the ratio of 1:8 by mass to form water. What mass of oxygen gas would be required to react completely with 3 g of hydrogen gas?

Since hydrogen and oxygen combine in the ratio of 1:8 by mass,

Therefore, we conclude that 24g of oxygen is required to react with 3g of hydrogen to form water.

3. Which postulate of Dalton’s atomic theory is the result of the law of conservation of mass?

The postulate of Dalton’s atomic theory  which is the result of law of conservation of mass states that, “Atoms are invisible particles which can neither be created nor be destroyed in during a chemical reaction.”

4. Which postulate of Dalton’s atomic theory explains the law of definite proportion?

“The relative number and kinds of atoms are constant in a given compound”, this postulate of Dalton’s atomic theory explains the law of definite proportion.

One atomic mass unit (u) is the mass unit equal to exactly 1/12th of the mass of one atom of Carbon-12 isotope. For chemical calculations, the relative atomic masses of all elements have been found with respect to an atom of C-12.

2. Why is it not possible to see an atom with naked eyes.

Atoms are extremely tiny particles, smaller than anything we can imagine. Their radii is measured in terms of nanometers (1nm = 10-9m). Hence they cannot be seen by our naked eyes.

1. Write down the formulae of

2. Write down the names of the compounds represented by the following formulae:

3. What is mean by the term chemical formula?

A chemical formula is a simple representation of a chemical compound with the help of symbols and valencies (charges) of elements.

4. How many atoms are present in a

For a given molecule,

1. If one mole of carbon weighs 12 grams, what is the weight of one atom of carbon?

1. A 0.24g sample of compound of oxygen and boron was found by analysis to contain 0.096g of boron and 0.144g of oxygen. Calculate the percentage composition of the compound by weight.

% of any element in a compound =

Total mass of reactants = mass of carbon + mass of oxygen

And, Law of Conservation of mass is proved.

Further, it also shows that carbon dioxide contains carbon and oxygen in a fixed ratio by mass, which is 3:8. Only 3g of Oxygen is utilized even if there was 50g of Oxygen. Thus, it also proves law of constant proportions.

3. What are polyatomic ions? Give examples

A group of atoms carrying a charge and  behaving as one entity is known as a polyatomic ion.

4. What are the chemical formulae of the following?

5. Give the names if the elements present in the following compounds:

6. Calculate the molar mass of the following substances.

a) 1 mole of nitrogen atoms

b) 4 moles of aluminium atoms

10. Calculate the number of molecules of sulphur(S8) present in 16g of solid sulphur

No. of moles = Given mass/ Molar mass

Step 3. No. of moles in given mass