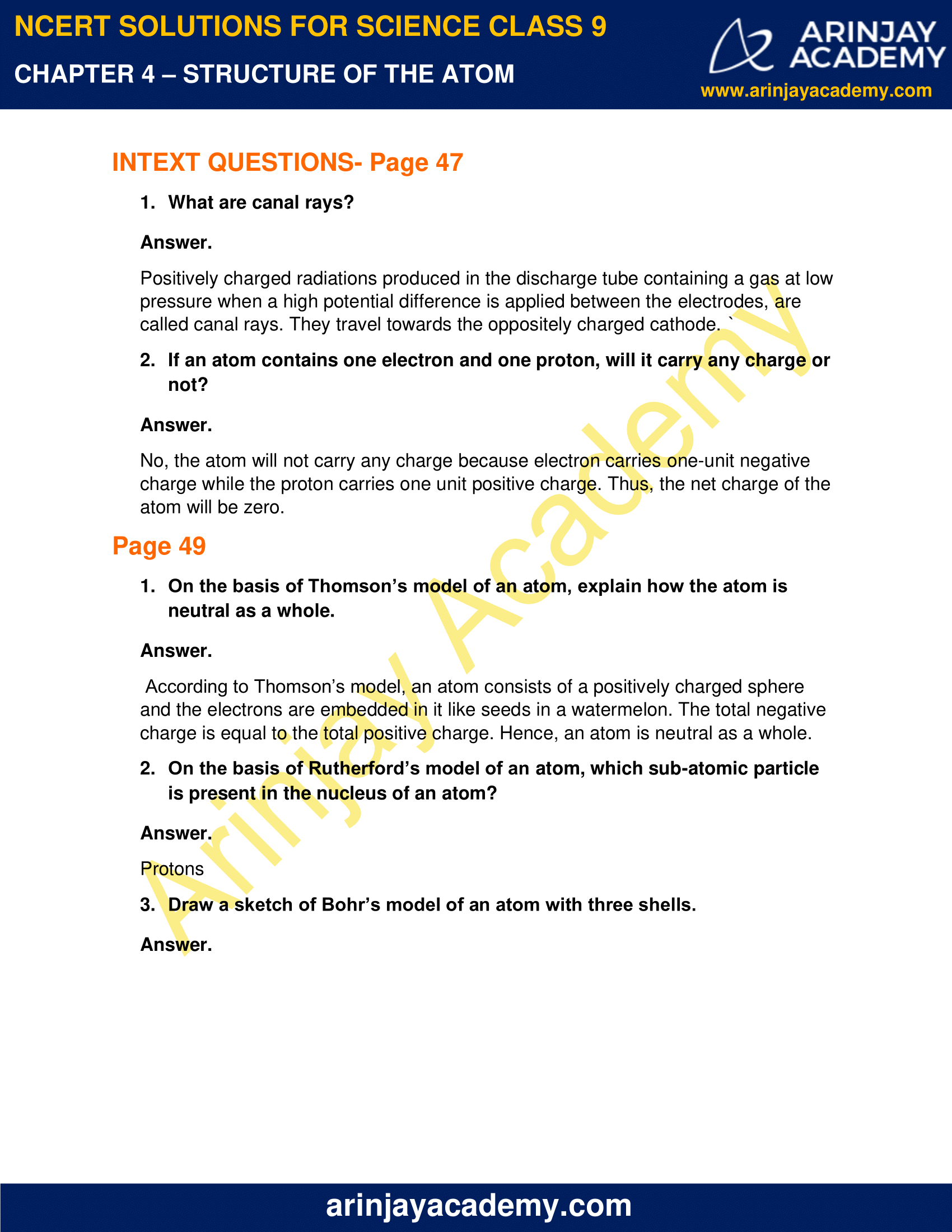 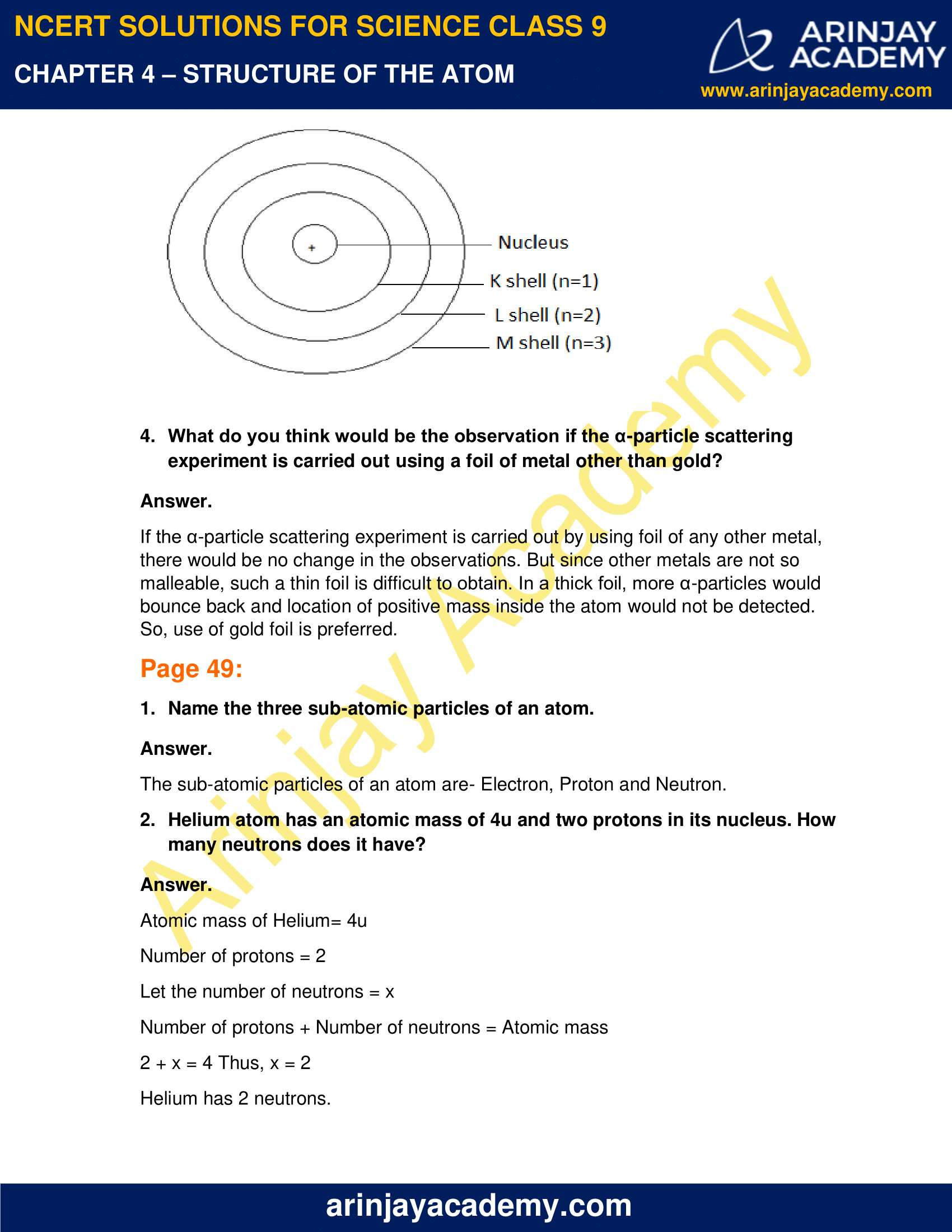 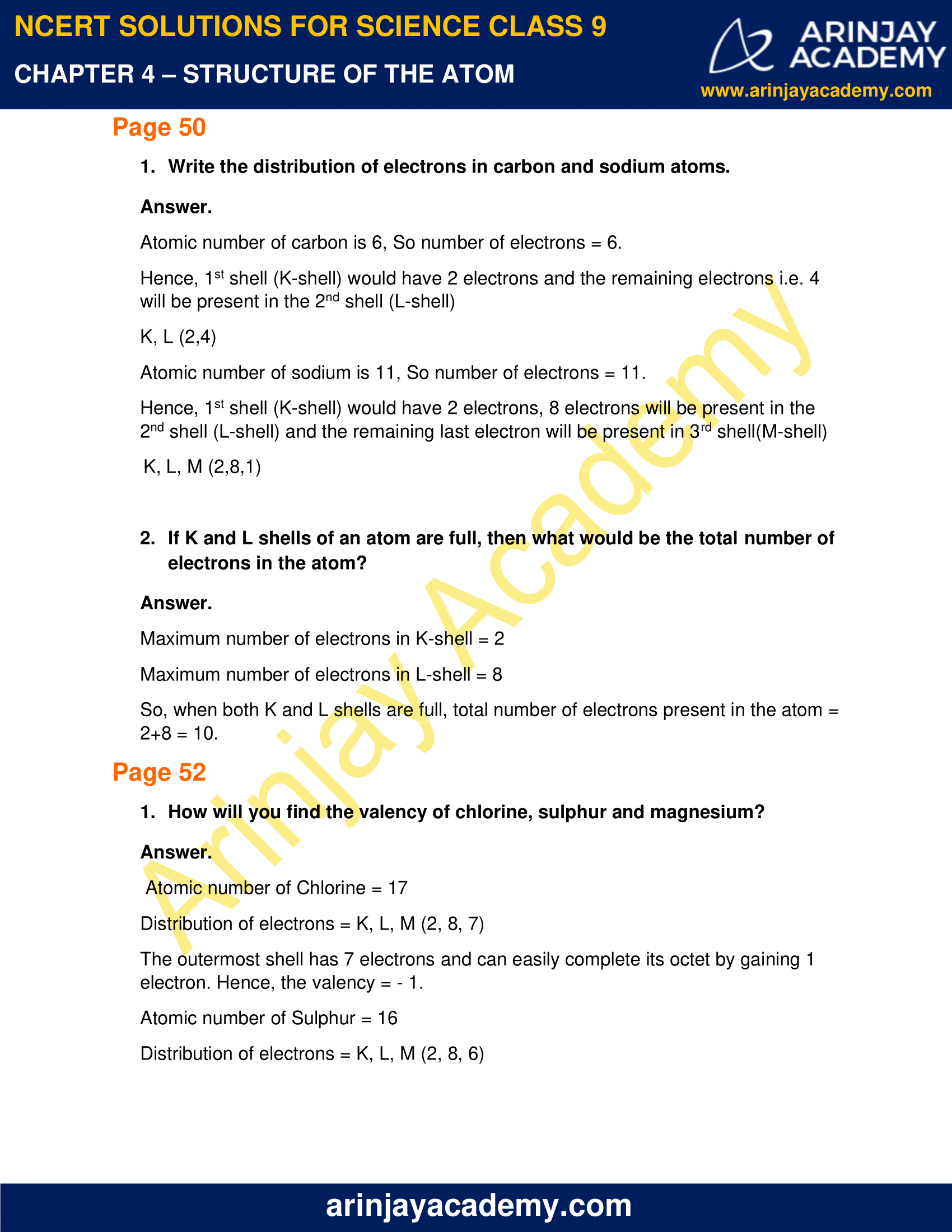 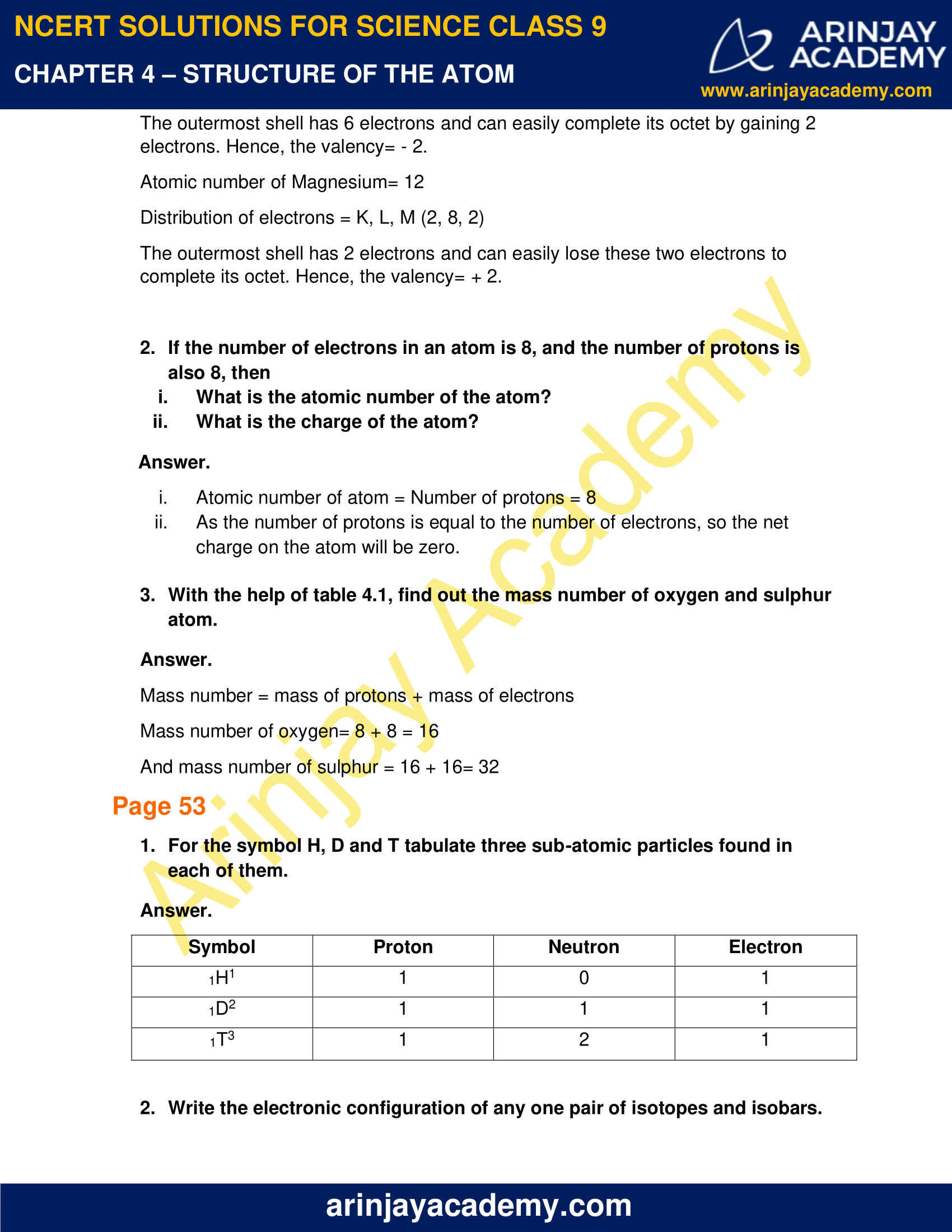 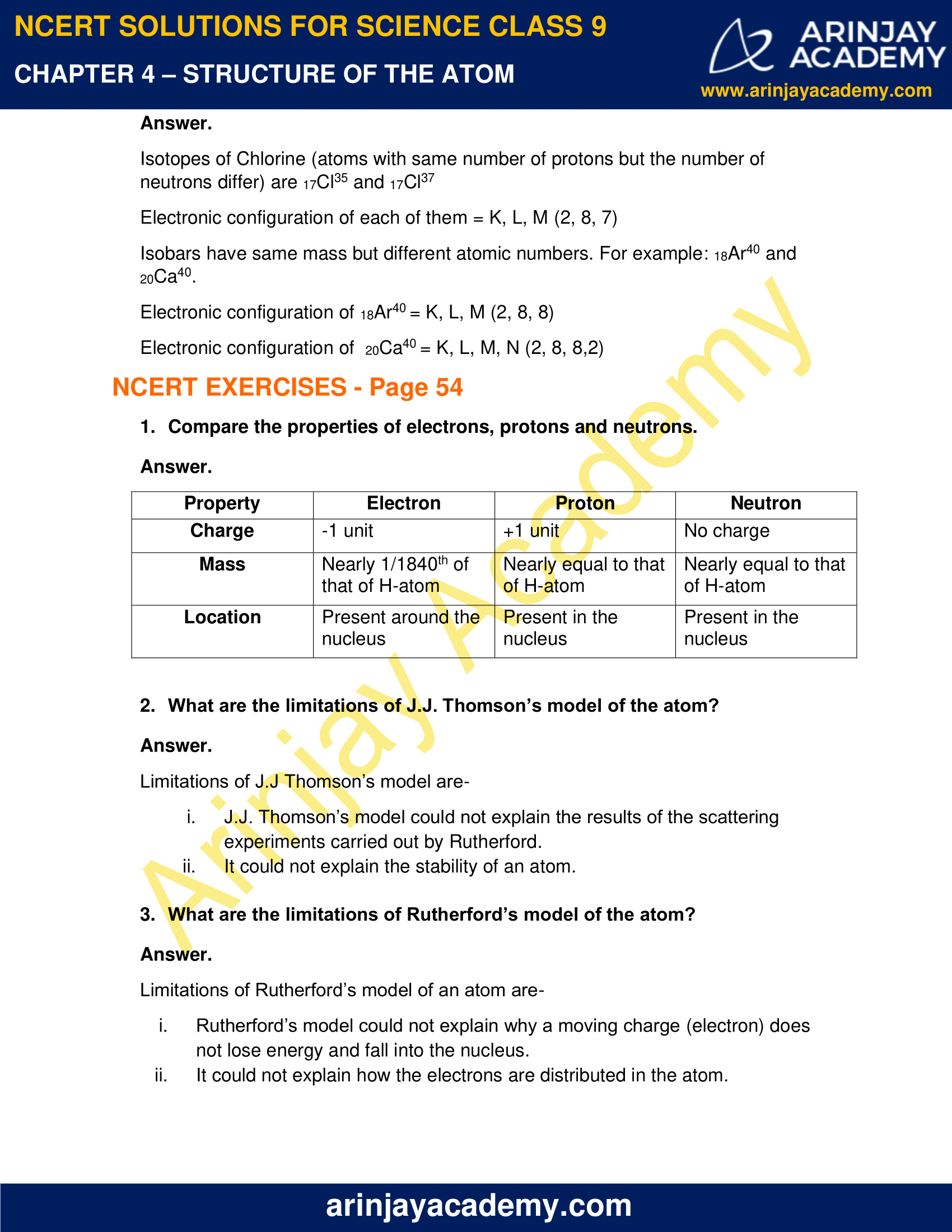 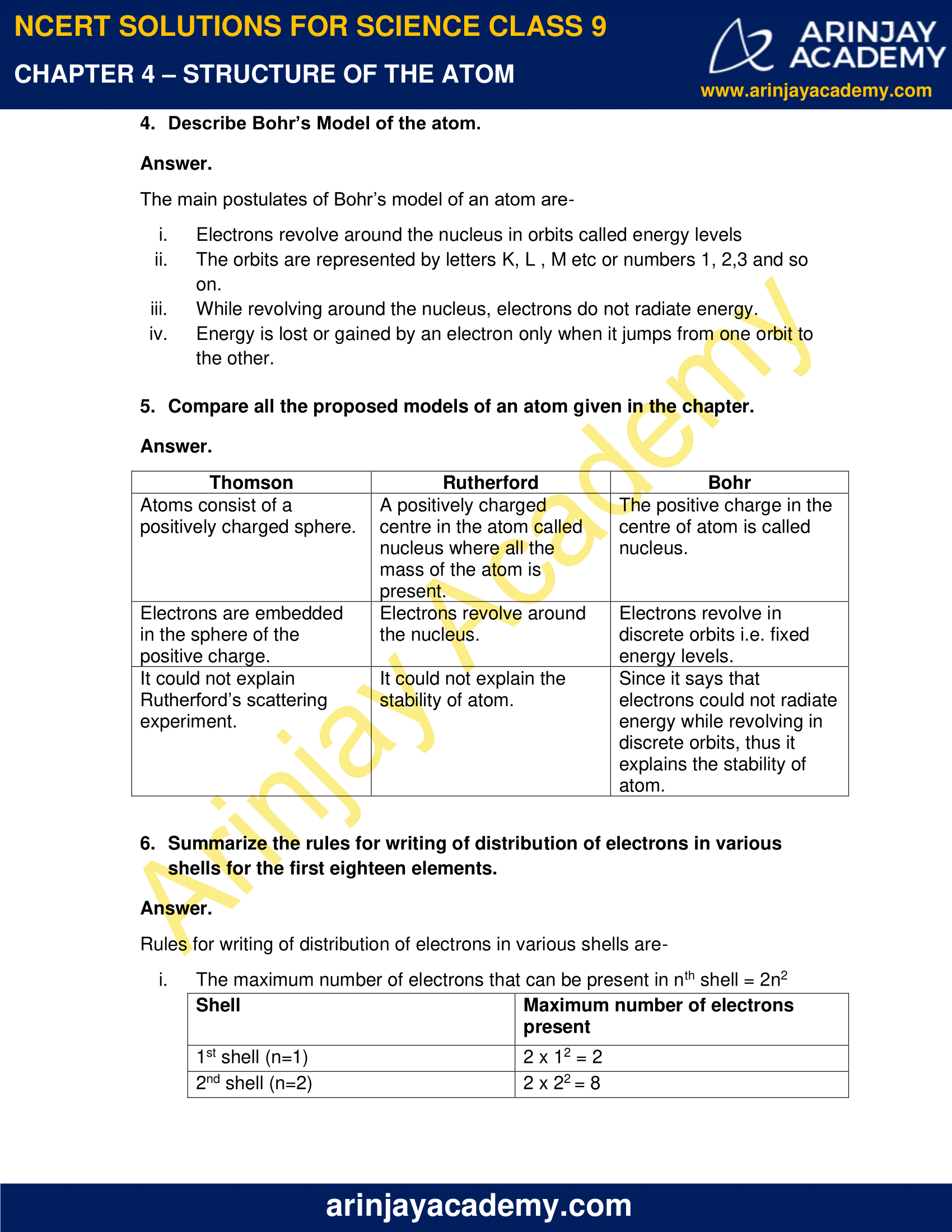 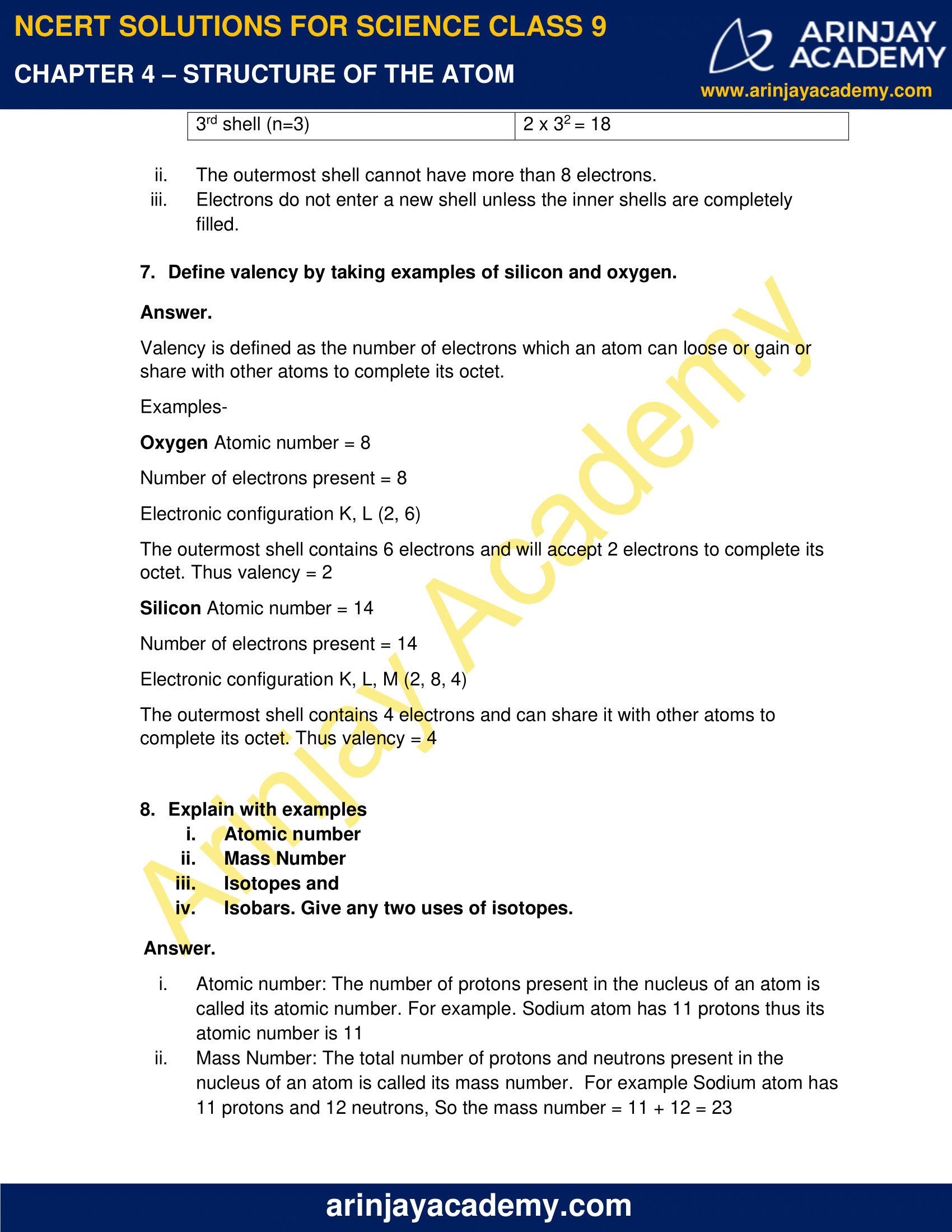 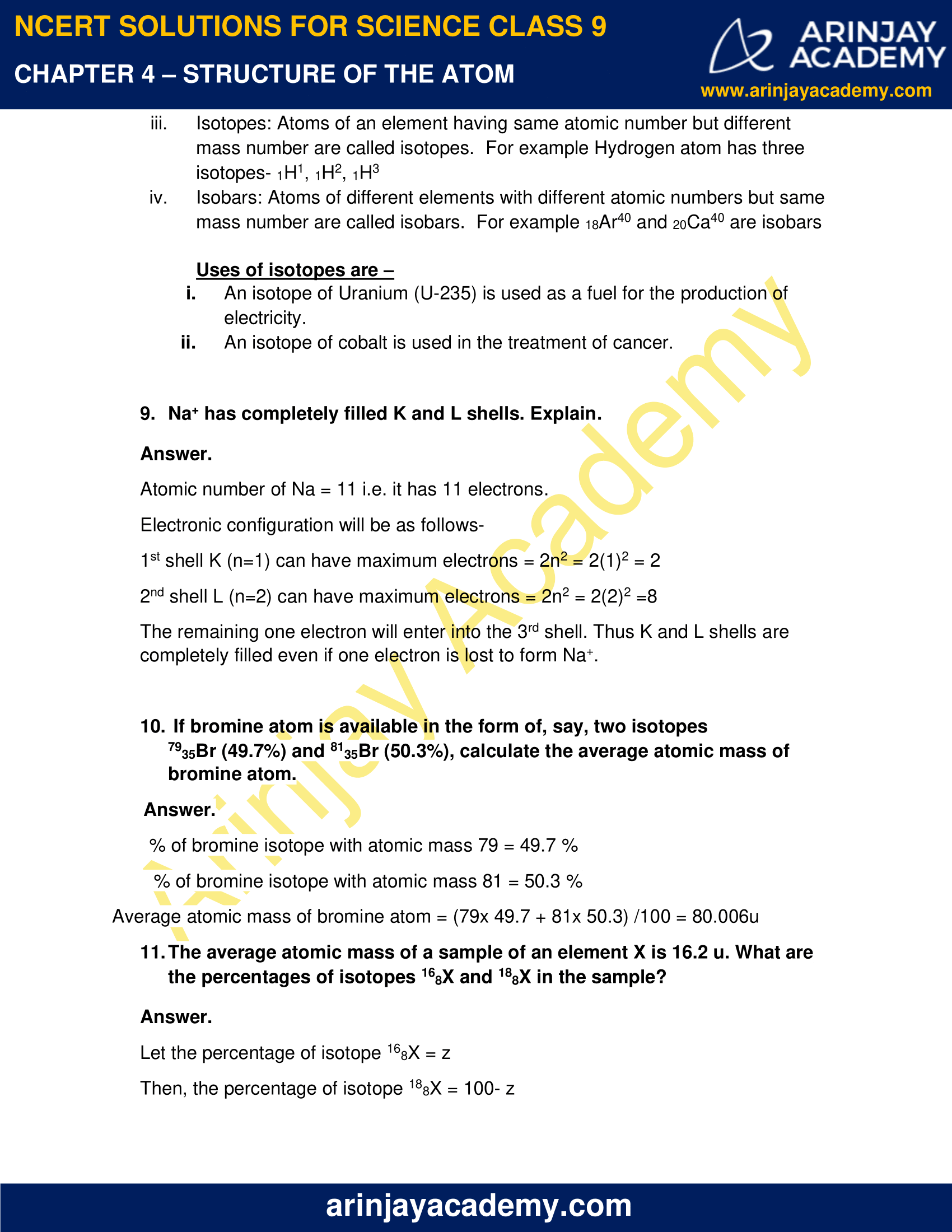 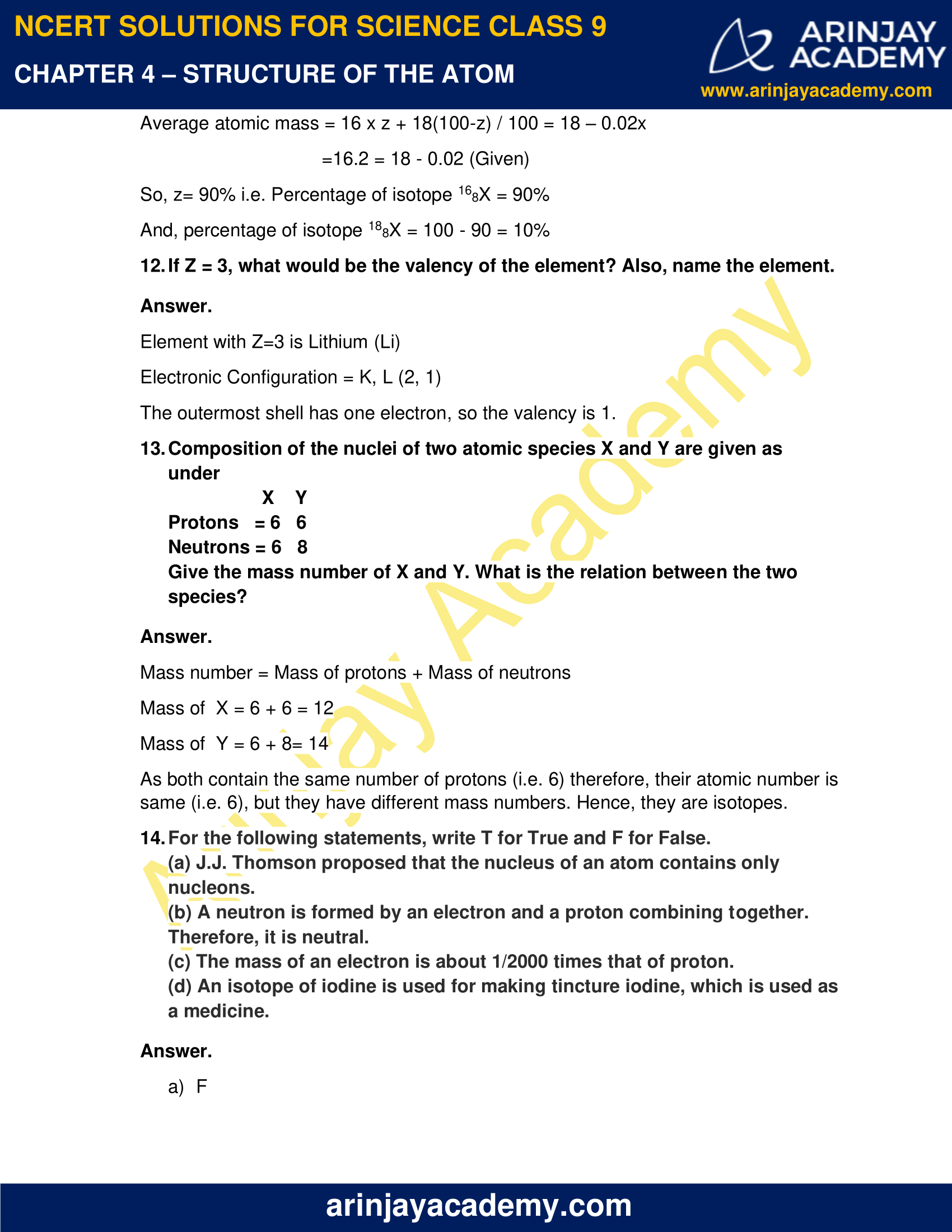 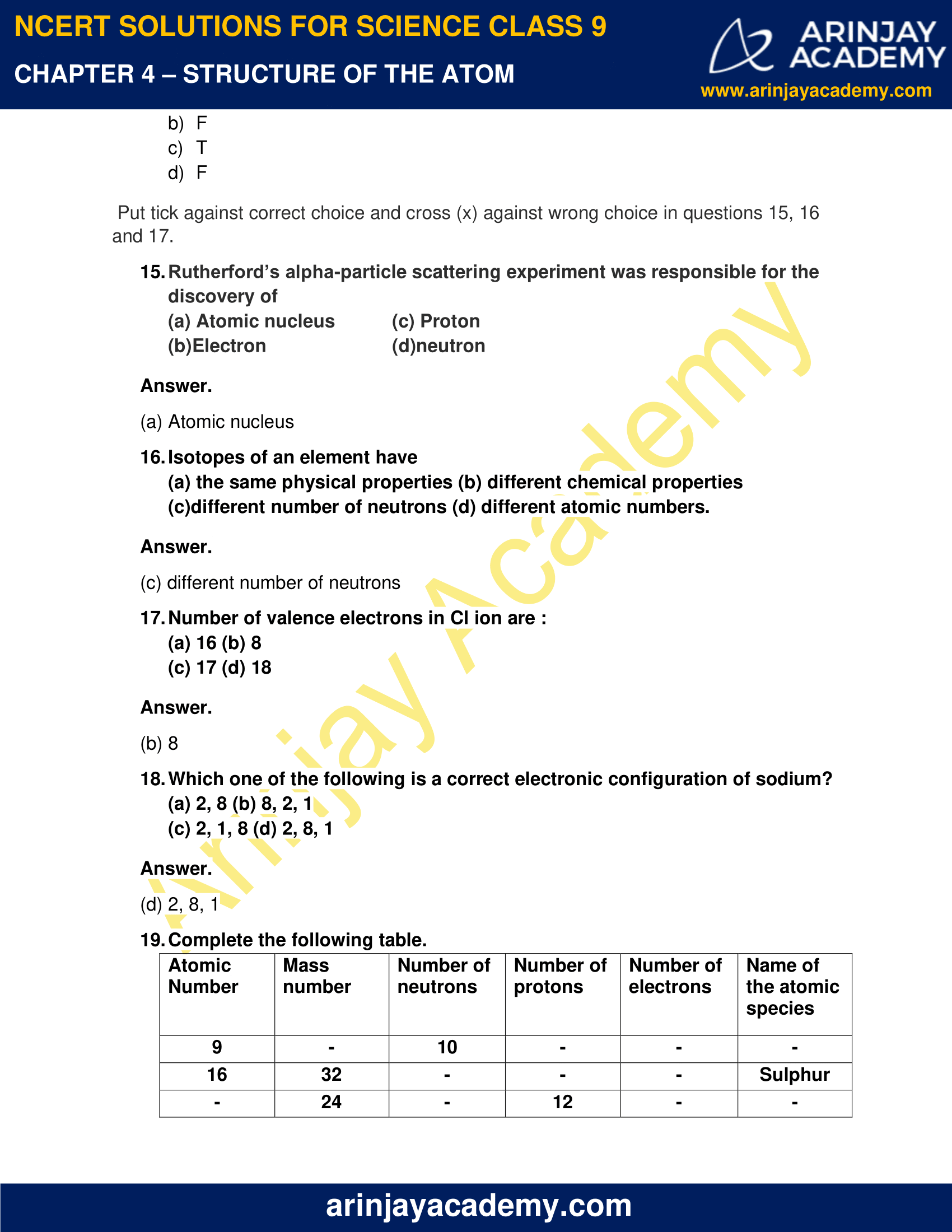 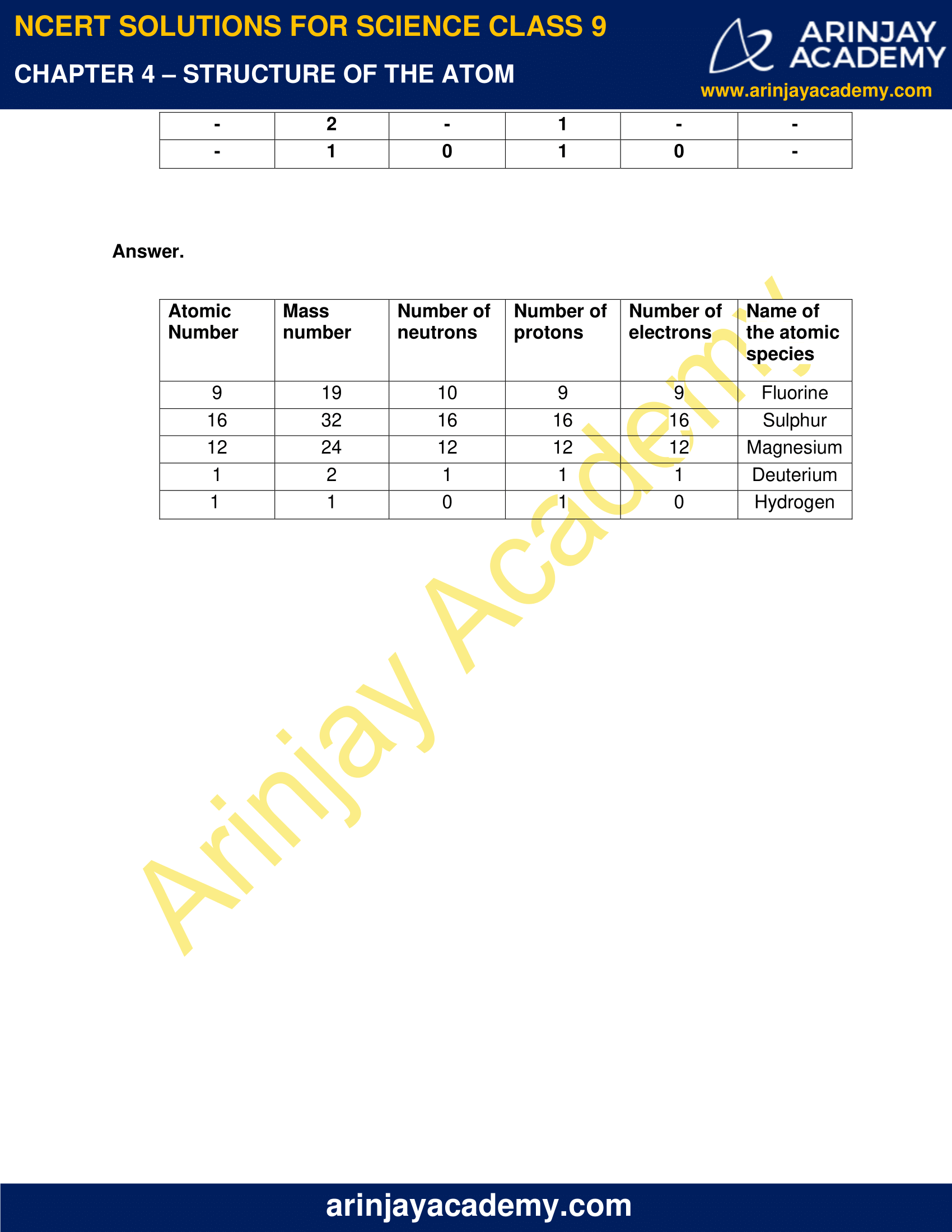 Positively charged radiations produced in the discharge tube containing a gas at low pressure when a high potential difference is applied between the electrodes, are called canal rays. They travel towards the oppositely charged cathode.       `

2. If an atom contains one electron and one proton, will it carry any charge or not?

1. On the basis of Thomson’s model of an atom, explain how the atom is neutral as a whole.

According to Thomson’s model, an atom consists of a positively charged sphere and the electrons are embedded in it like seeds in a watermelon. The total negative charge is equal to the total positive charge. Hence, an atom is neutral as a whole.

2. On the basis of Rutherford’s model of an atom, which sub-atomic particle is present in the nucleus of an atom?

3. Draw a sketch of Bohr’s model of an atom with three shells. 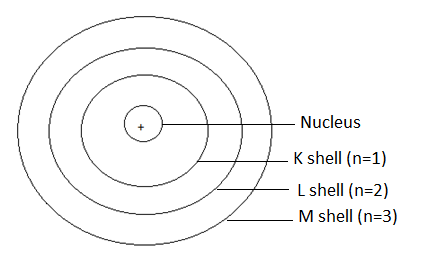 4. What do you think would be the observation if the α-particle scattering experiment is carried out using a foil of metal other than gold?

If the α-particle scattering experiment is carried out by using foil of any other metal, there would be no change in the observations. But since other metals are not so malleable, such a thin foil is difficult to obtain. In a thick foil, more α-particles would bounce back and location of positive mass inside the atom would not be detected. So, use of gold foil is preferred.

1. Name the three sub-atomic particles of an atom.

The sub-atomic particles of an atom are- Electron, Proton and Neutron.

2. Helium atom has an atomic mass of 4u and two protons in its nucleus. How many neutrons does it have?

Atomic mass of Helium= 4u

Let the number of neutrons = x

1. Write the distribution of electrons in carbon and sodium atoms.

Atomic number of carbon is 6, So number of electrons = 6.

Hence, 1st shell (K-shell) would have 2 electrons and the remaining electrons i.e. 4 will be present in the 2nd shell (L-shell)

2. If K and L shells of an atom are full, then what would be the total number of electrons in the atom?

Maximum number of electrons in K-shell = 2

Maximum number of electrons in L-shell = 8

1. How will you find the valency of chlorine, sulphur and magnesium?

The outermost shell has 7 electrons and can easily complete its octet by gaining 1 electron. Hence, the valency = – 1.

The outermost shell has 6 electrons and can easily complete its octet by gaining 2 electrons. Hence, the valency= – 2.

The outermost shell has 2 electrons and can easily lose these two electrons to complete its octet. Hence, the valency= + 2.

3. With the help of table 4.1, find out the mass number of oxygen and sulphur atom.

1. For the symbol H, D and T tabulate three sub-atomic particles found in each of them.

2. Write the electronic configuration of any one pair of isotopes and isobars.

Isobars have same mass but different atomic numbers. For example: 18Ar40 and 20Ca40.

1. Compare the properties of electrons, protons and neutrons.

2. What are the limitations of J.J. Thomson’s model of the atom?

Limitations of J.J Thomson’s model are-

3. What are the limitations of Rutherford’s model of the atom?

Limitations of Rutherford’s model of an atom are-

4. Describe Bohr’s Model of the atom.

The main postulates of Bohr’s model of an atom are-

i. Electrons revolve around the nucleus in orbits called energy levels
ii. The orbits are represented by letters K, L , M etc or numbers 1, 2,3 and so on.
iii. While revolving around the nucleus, electrons do not radiate energy.
iv. Energy is lost or gained by an electron only when it jumps from one orbit to the other.

5. Compare all the proposed models of an atom given in the chapter.

6. Summarize the rules for writing of distribution of electrons in various shells for the first eighteen elements.

Rules for writing of distribution of electrons in various shells are-

i. The maximum number of electrons that can be present in nth shell = 2n2

ii. The outermost shell cannot have more than 8 electrons.

iii. Electrons do not enter a new shell unless the inner shells are completely filled.

7. Define valency by taking examples of silicon and oxygen.

Valency is defined as the number of electrons which an atom can loose or gain or share with other atoms to complete its octet.

The outermost shell contains 6 electrons and will accept 2 electrons to complete its octet. Thus valency = 2

The outermost shell contains 4 electrons and can share it with other atoms to complete its octet. Thus valency = 4

ii. Mass Number: The total number of protons and neutrons present in the nucleus of an atom is called its mass number. For example Sodium atom has 11 protons and 12 neutrons, So the mass number = 11 + 12 = 23

Uses of isotopes are –

Electronic configuration will be as follows-

The remaining one electron will enter into the 3rd shell. Thus K and L shells are completely filled even if one electron is lost to form Na+.

Element with Z=3 is Lithium (Li)

The outermost shell has one electron, so the valency is 1.

13. Composition of the nuclei of two atomic species X and Y are given as under

Give the mass number of X and Y. What is the relation between the two species?

As both contain the same number of protons (i.e. 6) therefore, their atomic number is same (i.e. 6), but they have different mass numbers. Hence, they are isotopes.

14. For the following statements, write T for True and F for False.
(a) J.J. Thomson proposed that the nucleus of an atom contains only nucleons.
(b) A neutron is formed by an electron and a proton combining together. Therefore, it is neutral.
(c) The mass of an electron is about 1/2000 times that of proton.
(d) An isotope of iodine is used for making tincture iodine, which is used as a medicine.

Put tick against correct choice and cross (x) against wrong choice in questions 15, 16    and 17.

Topics Covered in Structure of the Atom Class 9 Science