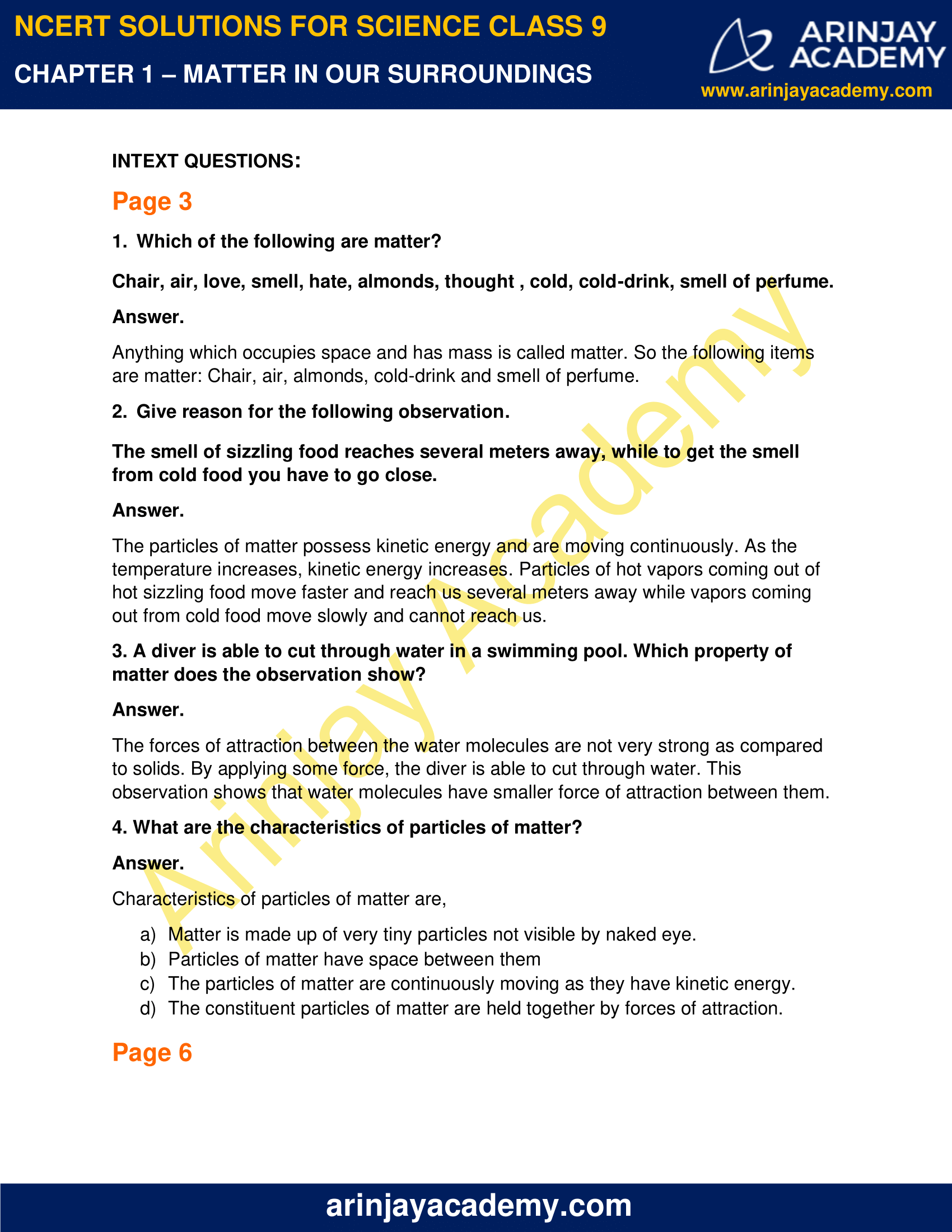 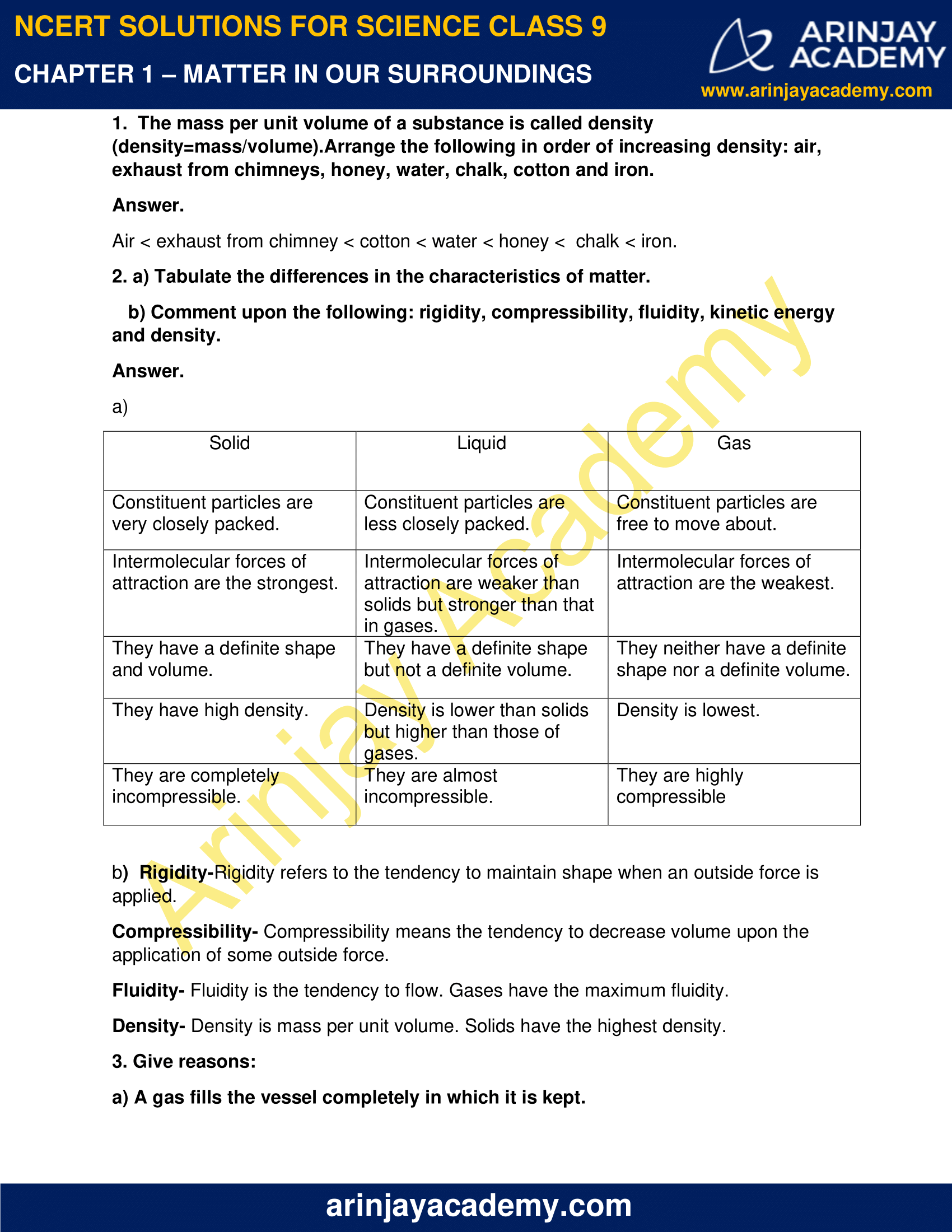 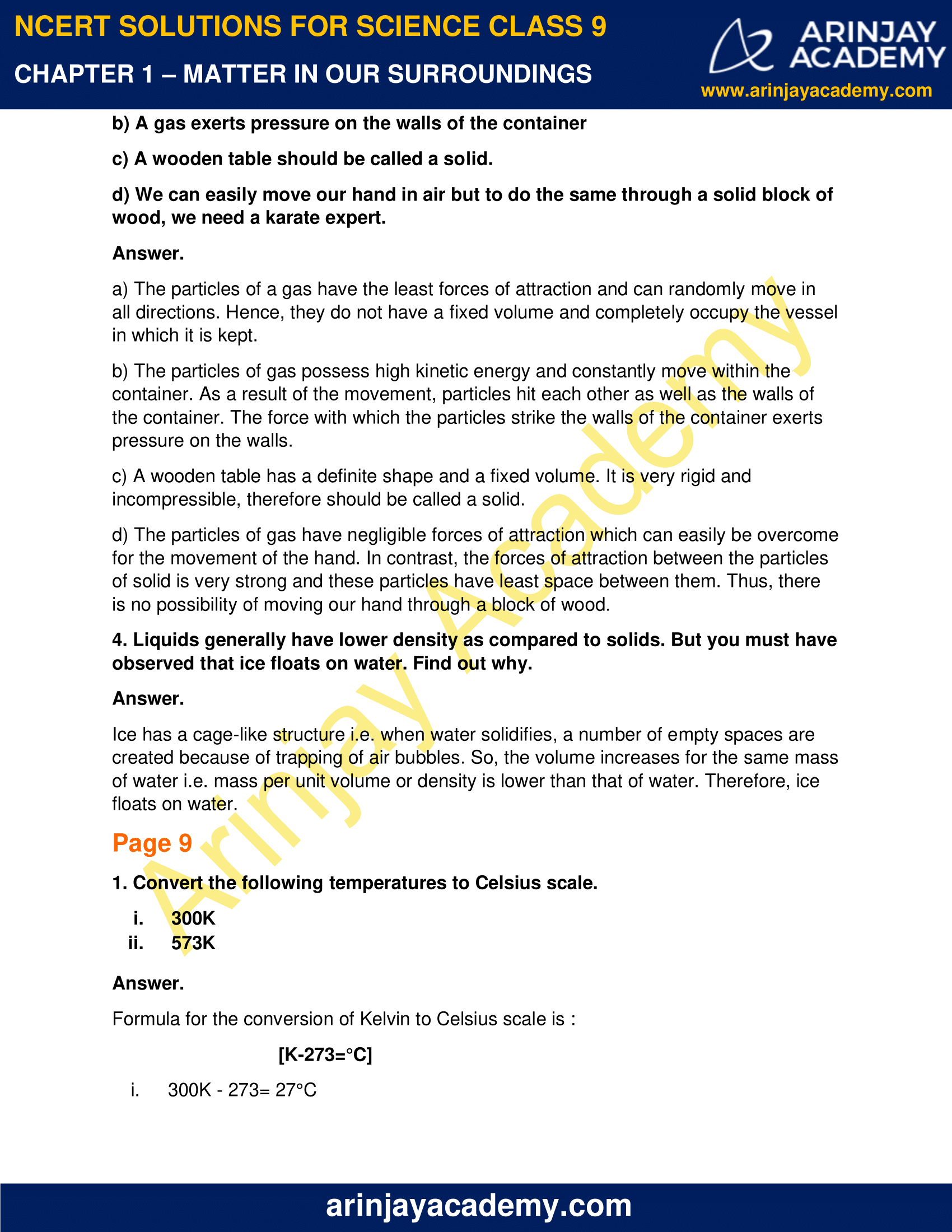 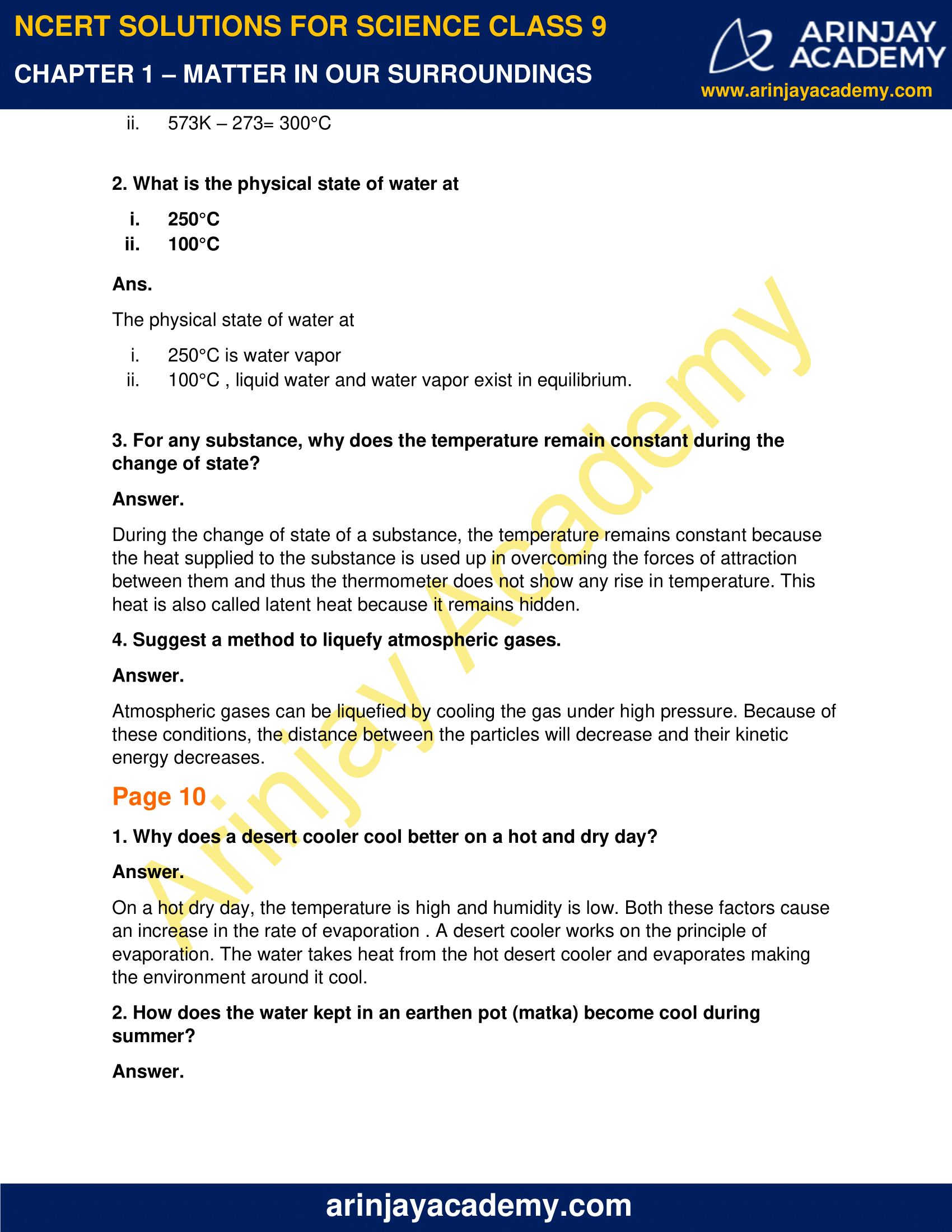 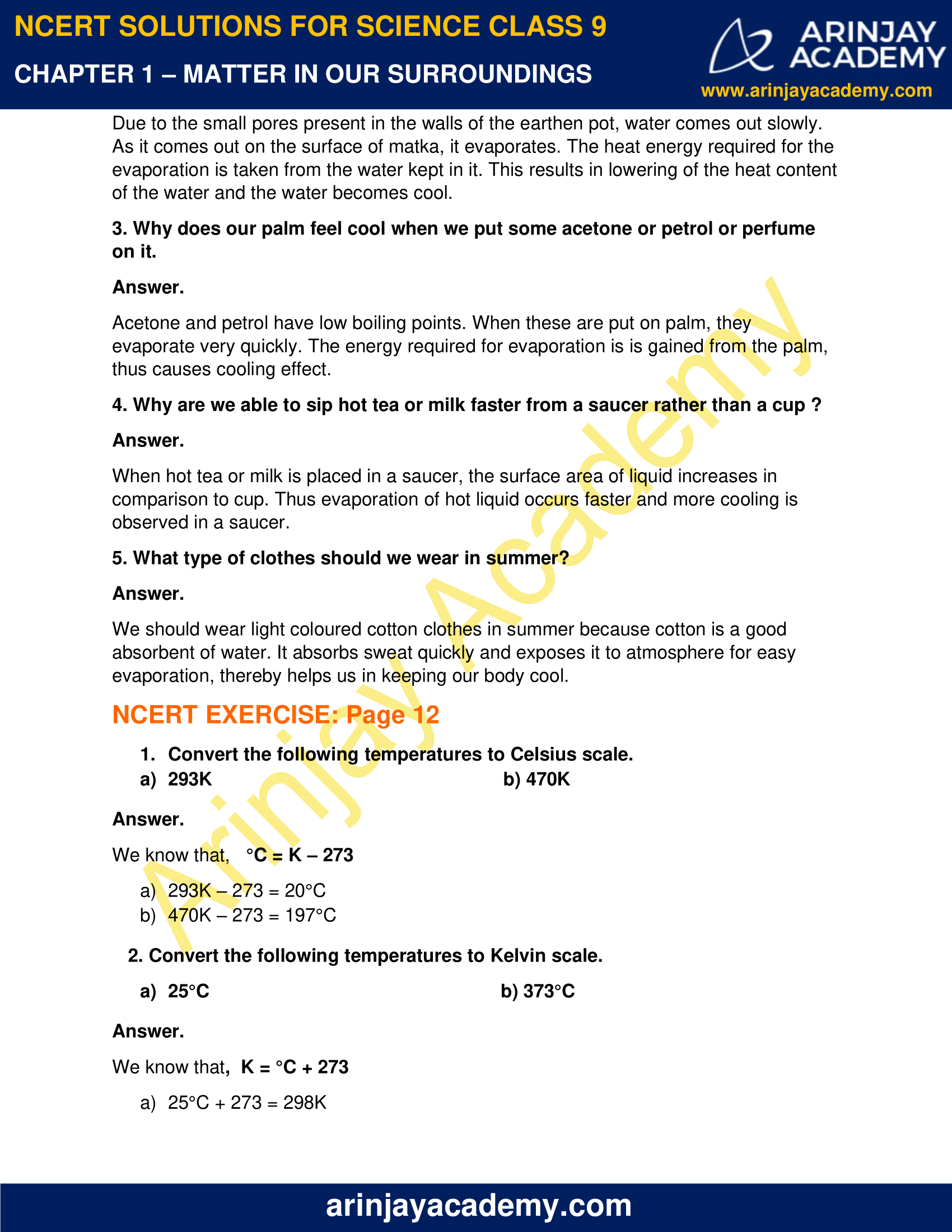 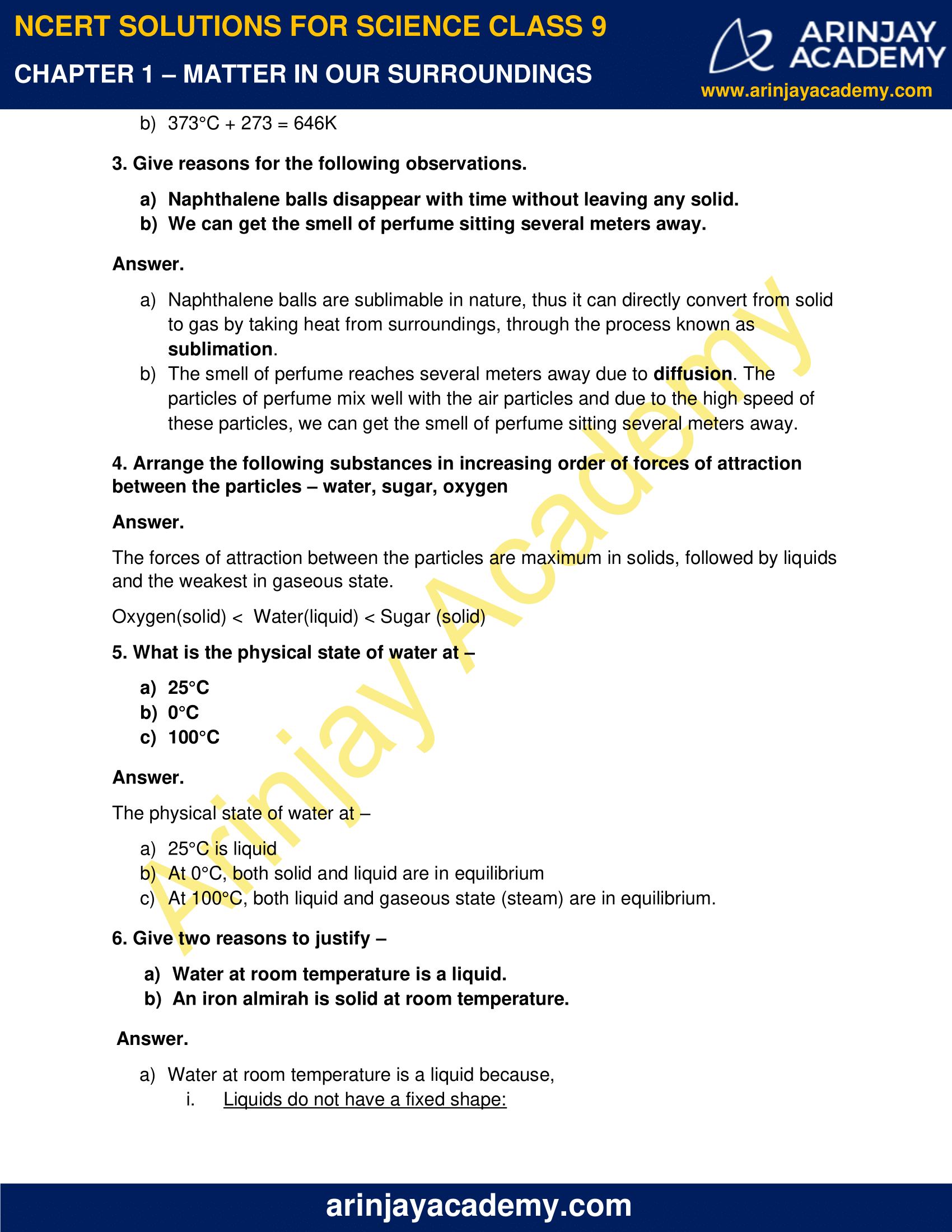 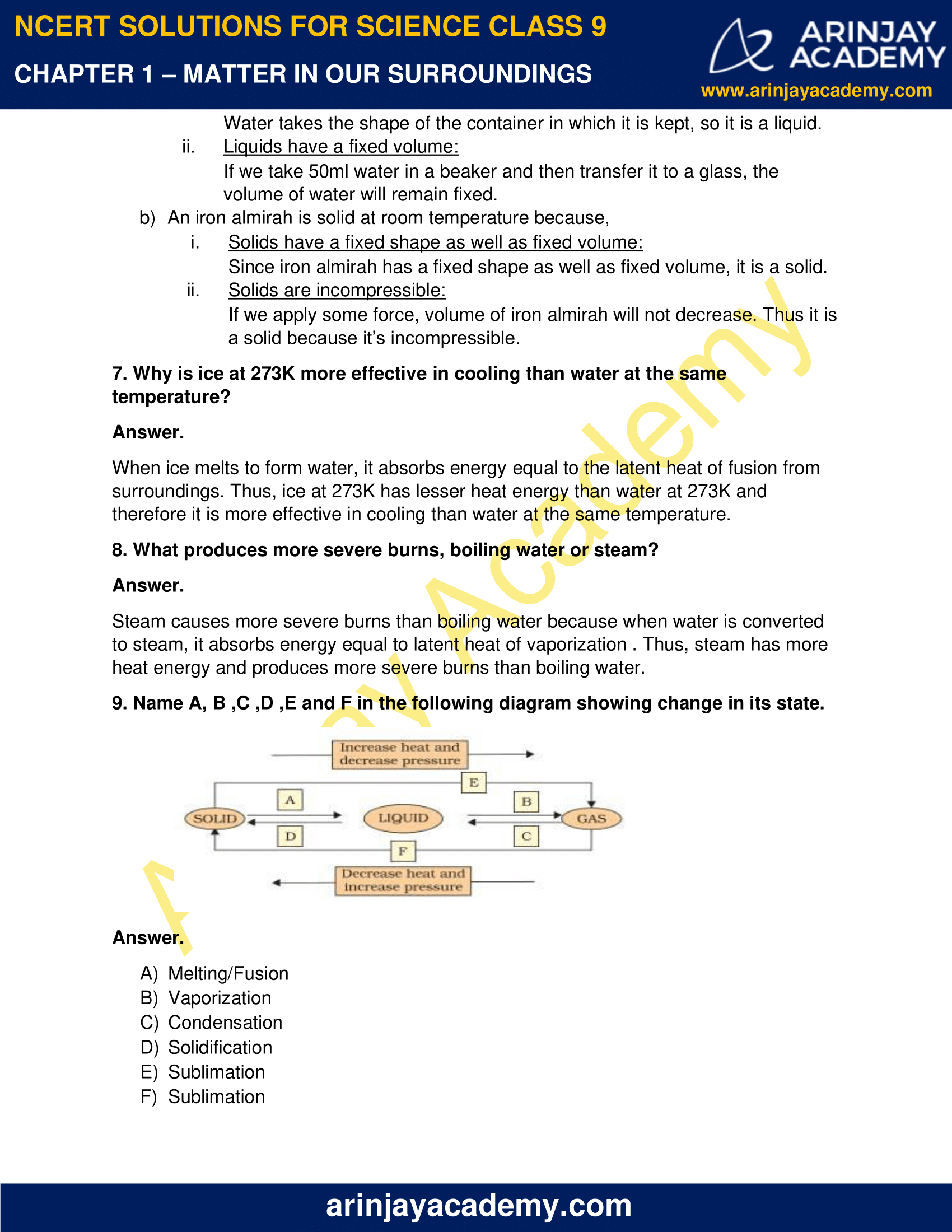 1. Which of the following are matter?

Anything which occupies space and has mass is called matter. So the following items are matter: Chair, air, almonds, cold-drink and smell of perfume.

2. Give reason for the following observation.

The smell of sizzling food reaches several meters away, while to get the smell from cold food you have to go close.

3. A diver is able to cut through water in a swimming pool. Which property of matter does the observation show?

4. What are the characteristics of particles of matter?

Characteristics of particles of matter are,

1. The mass per unit volume of a substance is called density (density=mass/volume).Arrange the following in order of increasing density: air, exhaust from chimneys, honey, water, chalk, cotton and iron.

2. a) Tabulate the differences in the characteristics of matter.

b) Comment upon the following: rigidity, compressibility, fluidity, kinetic energy and density. 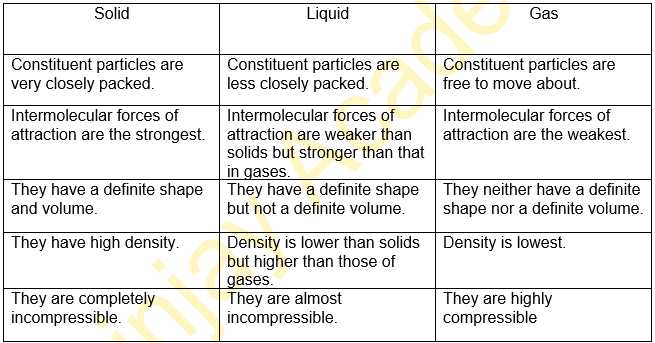 b) Rigidity-Rigidity refers to the tendency to maintain shape when an outside force is applied.

Fluidity- Fluidity is the tendency to flow. Gases have the maximum fluidity.

Density- Density is mass per unit volume. Solids have the highest density.

a) A gas fills the vessel completely in which it is kept.

b) A gas exerts pressure on the walls of the container

c) A wooden table should be called a solid.

d) We can easily move our hand in air but to do the same through a solid block of wood, we need a karate expert.

a) The particles of a gas have the least forces of attraction and can randomly move in all directions. Hence, they do not have a fixed volume and completely occupy the vessel in which it is kept.

c) A wooden table has a definite shape and a fixed volume. It is very rigid and incompressible, therefore should be called a solid.

4. Liquids generally have lower density as compared to solids. But you must have observed that ice floats on water. Find out why.

Ice has a cage-like structure i.e. when water solidifies, a number of empty spaces are created because of trapping of air bubbles. So, the volume increases for the same mass of water i.e. mass per unit volume or density is lower than that of water. Therefore, ice floats on water.

Formula for the conversion of Kelvin to Celsius scale is :

2. What is the physical state of water at

The physical state of water at

3. For any substance, why does the temperature remain constant during the change of state?

During the change of state of a substance, the temperature remains constant because the heat supplied to the substance is used up in overcoming the forces of attraction between them and thus the thermometer does not show any rise in temperature. This heat is also called latent heat because it remains hidden.

Atmospheric gases can be liquefied by cooling the gas under high pressure. Because of these conditions, the distance between the particles will decrease and their kinetic energy decreases.

1. Why does a desert cooler cool better on a hot and dry day?

On a hot dry day, the temperature is high and humidity is low. Both these factors cause an increase in the rate of evaporation . A desert cooler works on the principle of evaporation. The water takes heat from the hot desert cooler and evaporates making the environment around it cool.

2. How does the water kept in an earthen pot (matka) become cool during summer?

Due to the small pores present in the walls of the earthen pot, water comes out slowly. As it comes out on the surface of matka, it evaporates. The heat energy required for the evaporation is taken from the water kept in it. This results in lowering of the heat content of the water and the water becomes cool.

3. Why does our palm feel cool when we put some acetone or petrol or perfume on it.

Acetone and petrol have low boiling points. When these are put on palm, they evaporate very quickly. The energy required for evaporation is is gained from the palm, thus causes cooling effect.

4. Why are we able to sip hot tea or milk faster from a saucer rather than a cup ?

When hot tea or milk is placed in a saucer, the surface area of liquid increases in comparison to cup. Thus evaporation of hot liquid occurs faster and more cooling is observed in a saucer.

5. What type of clothes should we wear in summer?

We should wear light coloured cotton clothes in summer because cotton is a good absorbent of water. It absorbs sweat quickly and exposes it to atmosphere for easy evaporation, thereby helps us in keeping our body cool.

3. Give reasons for the following observations.

a) Naphthalene balls disappear with time without leaving any solid.
b) We can get the smell of perfume sitting several meters away.

a) Naphthalene balls are sublimable in nature, thus it can directly convert from solid to gas by taking heat from surroundings, through the process known as sublimation.

4. Arrange the following substances in increasing order of forces of attraction between the particles – water, sugar, oxygen

The forces of attraction between the particles are maximum in solids, followed by liquids and the weakest in gaseous state.

5. What is the physical state of water at –

The physical state of water at –

6. Give two reasons to justify –

a) Water at room temperature is a liquid because,

i. Liquids do not have a fixed shape:

Water takes the shape of the container in which it is kept, so it is a liquid.

ii. Liquids have a fixed volume:

If we take 50ml water in a beaker and then transfer it to a glass, the volume of water will remain fixed.

b) An iron almirah is solid at room temperature because,

i. Solids have a fixed shape as well as fixed volume:

Since iron almirah has a fixed shape as well as fixed volume, it is a solid.

If we apply some force, volume of iron almirah will not decrease. Thus it is a solid because it’s incompressible.

7. Why is ice at 273K more effective in cooling than water at the same temperature?

When ice melts to form water, it absorbs energy equal to the latent heat of fusion from surroundings. Thus, ice at 273K has lesser heat energy than water at 273K and therefore it is more effective in cooling than water at the same temperature.

9. Name A, B ,C ,D ,E and F in the following diagram showing change in its state.

Topics Covered in Matter in our Surrounding Class 9 Science