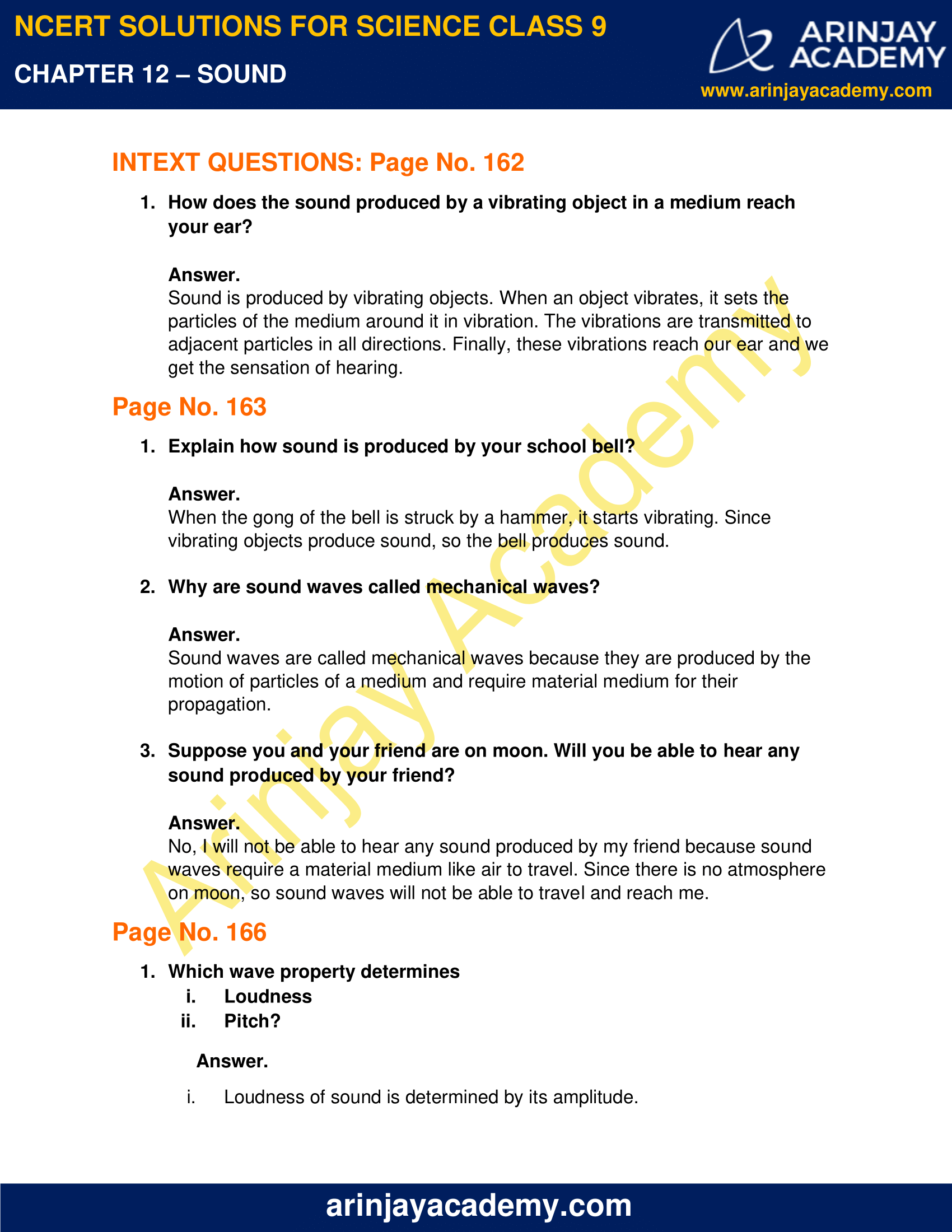 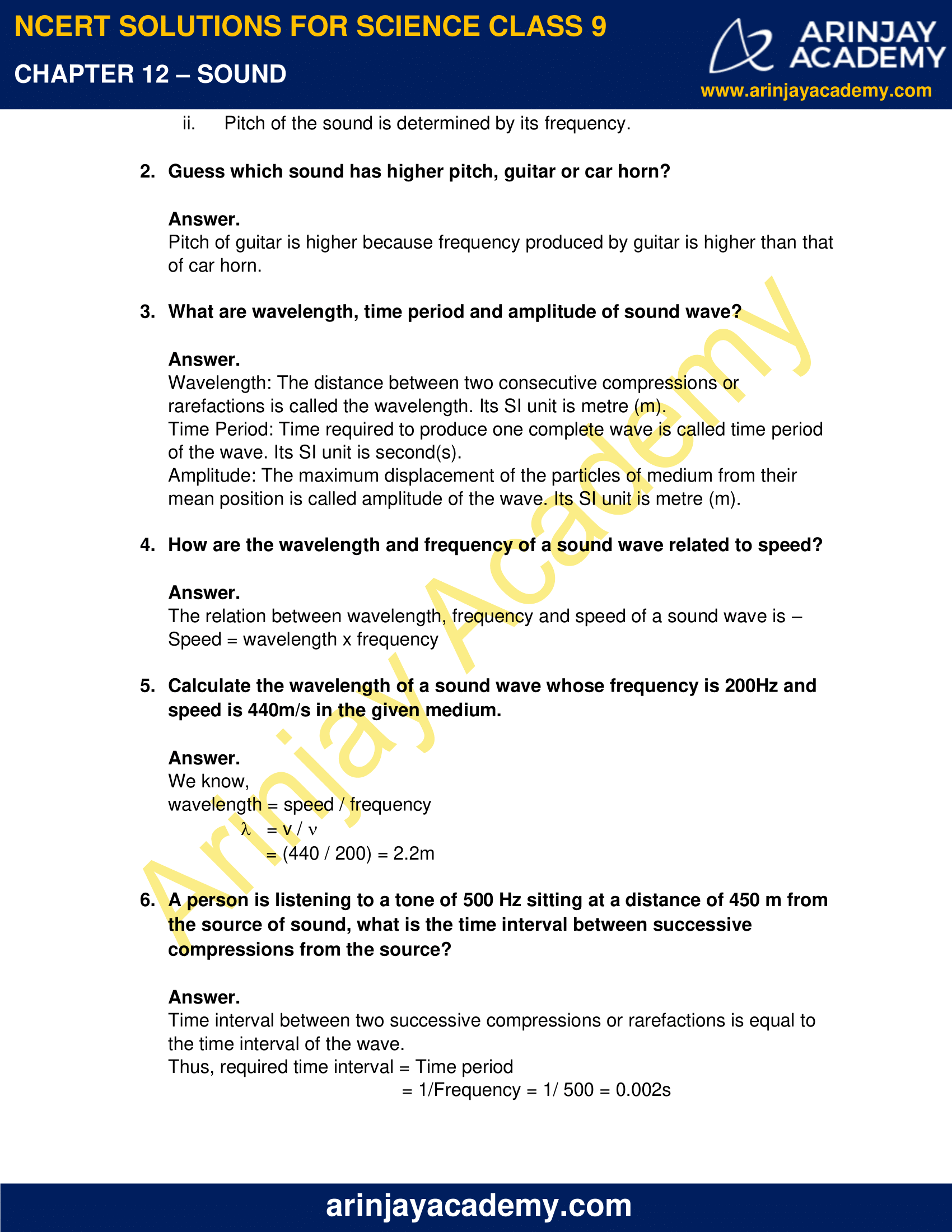 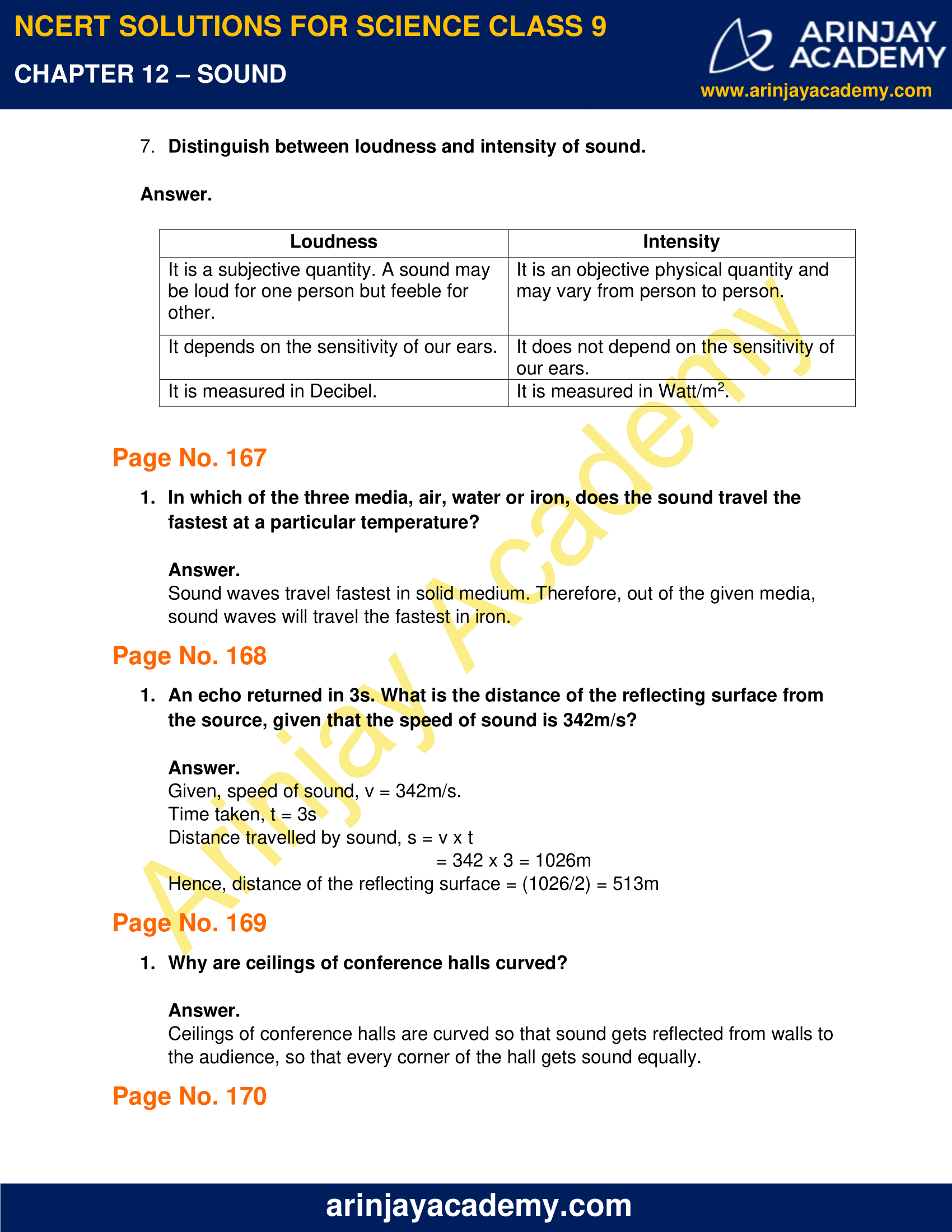 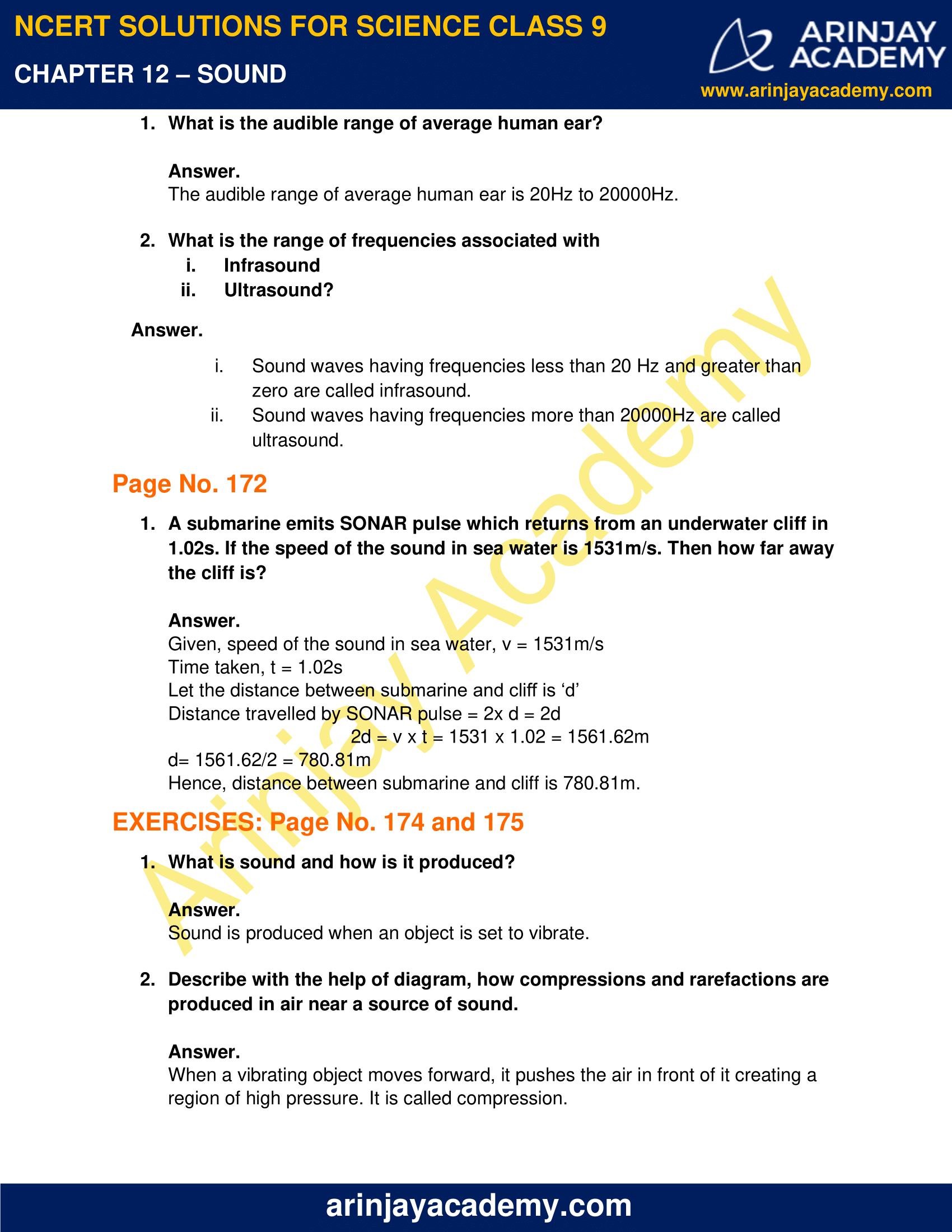 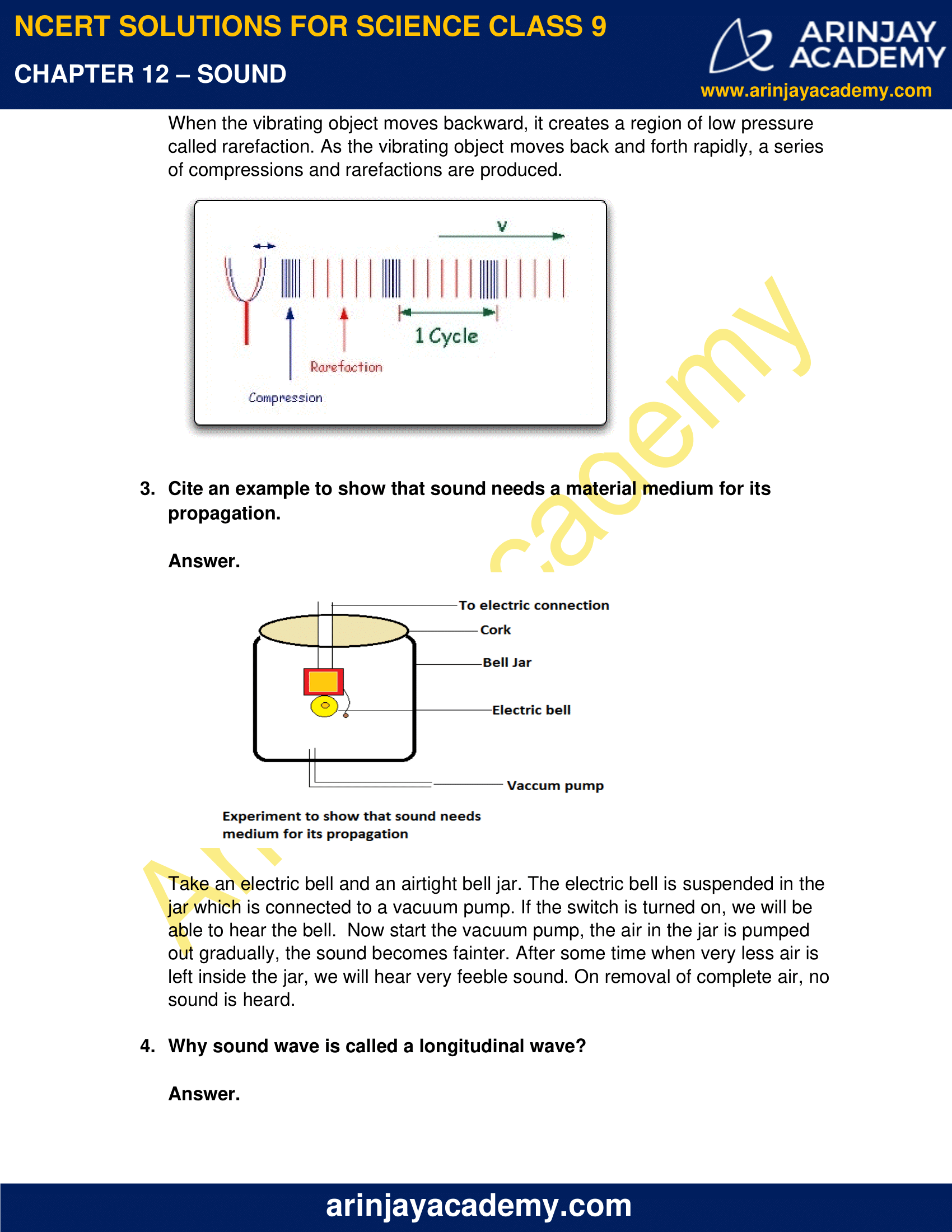 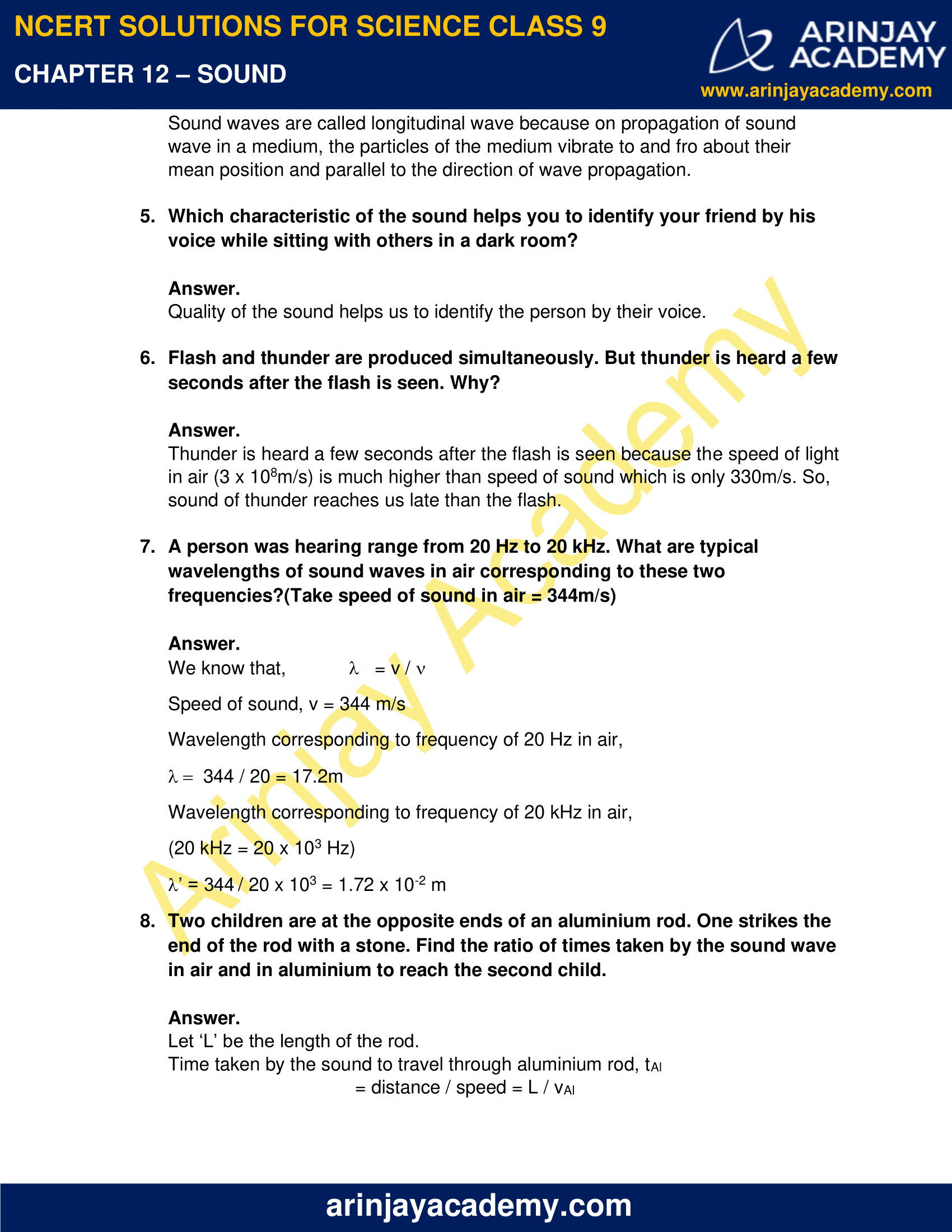 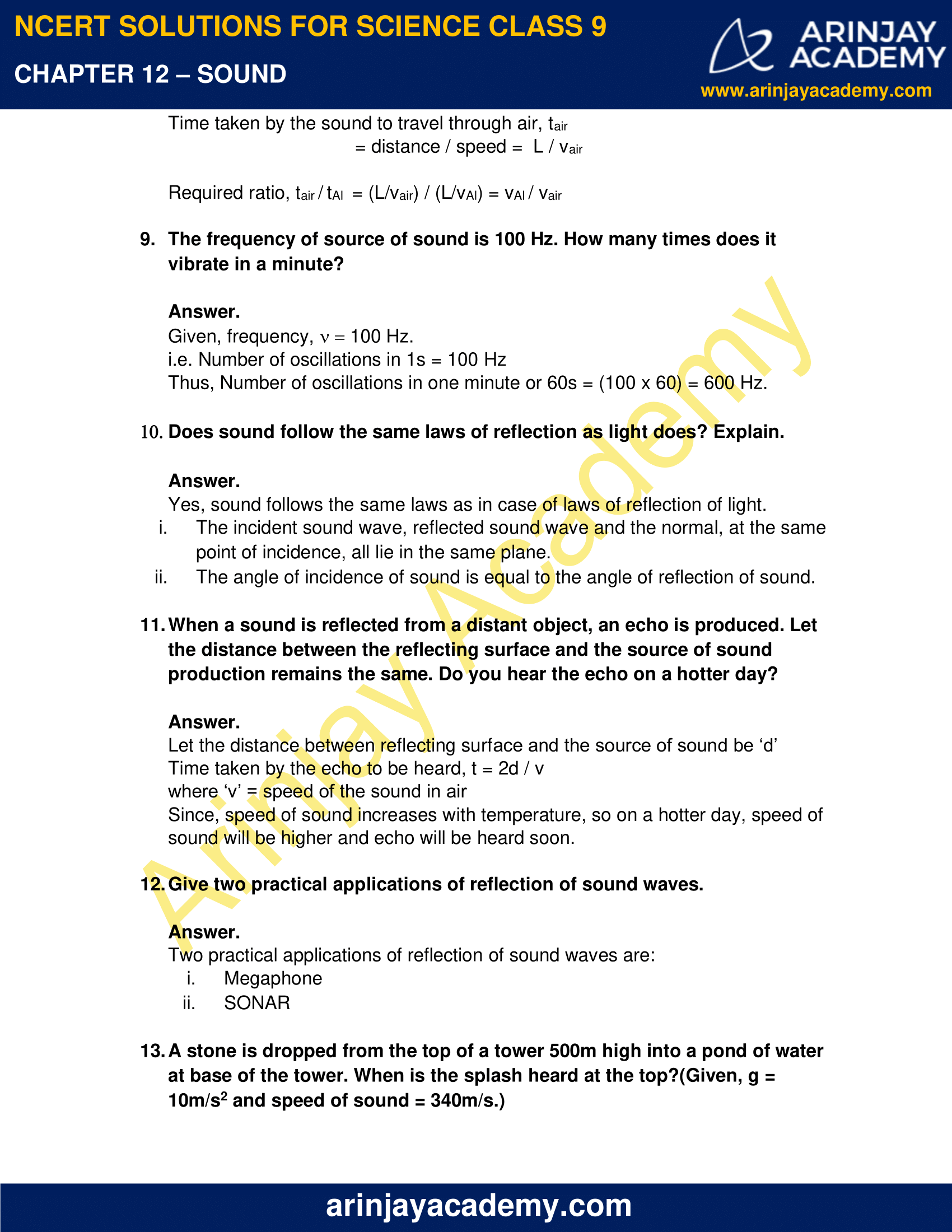 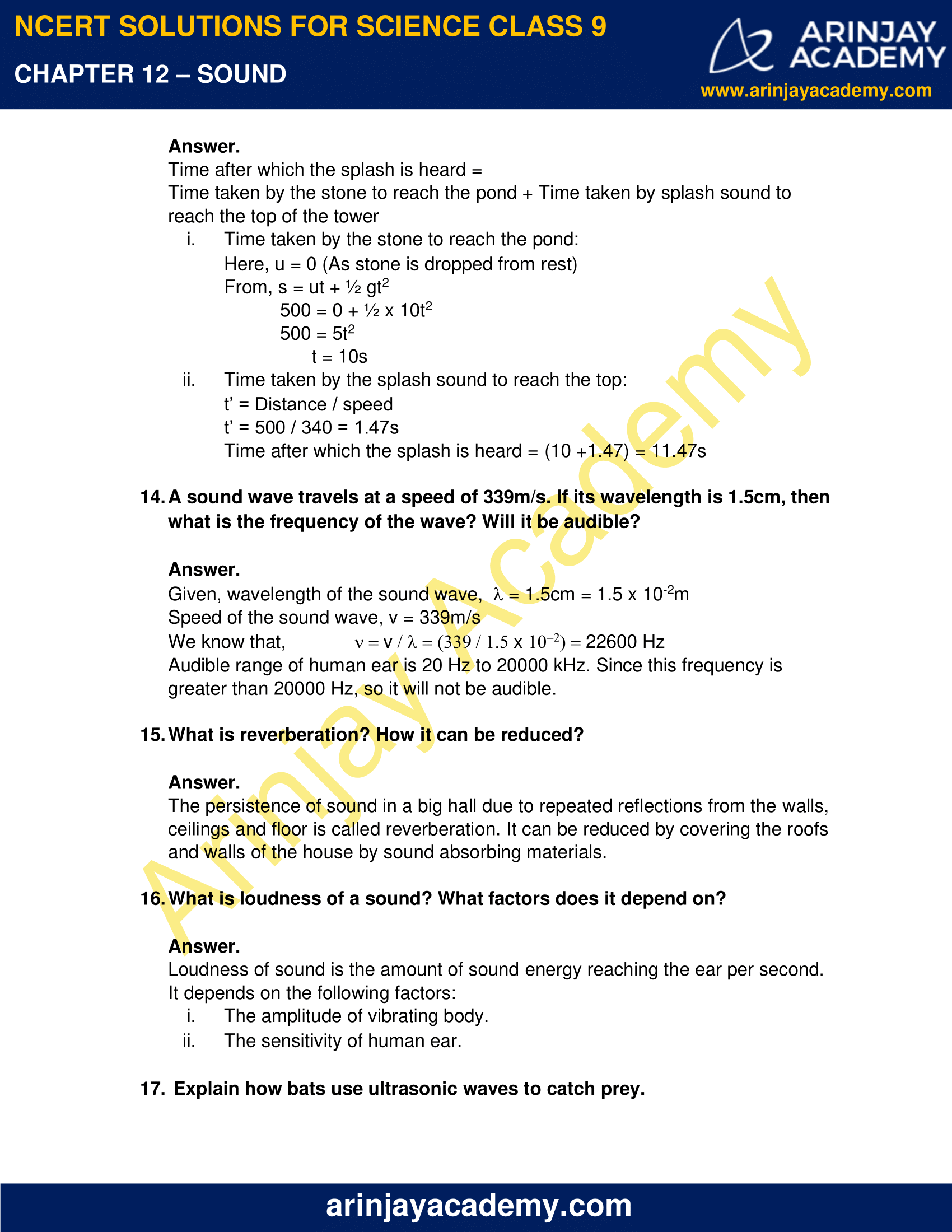 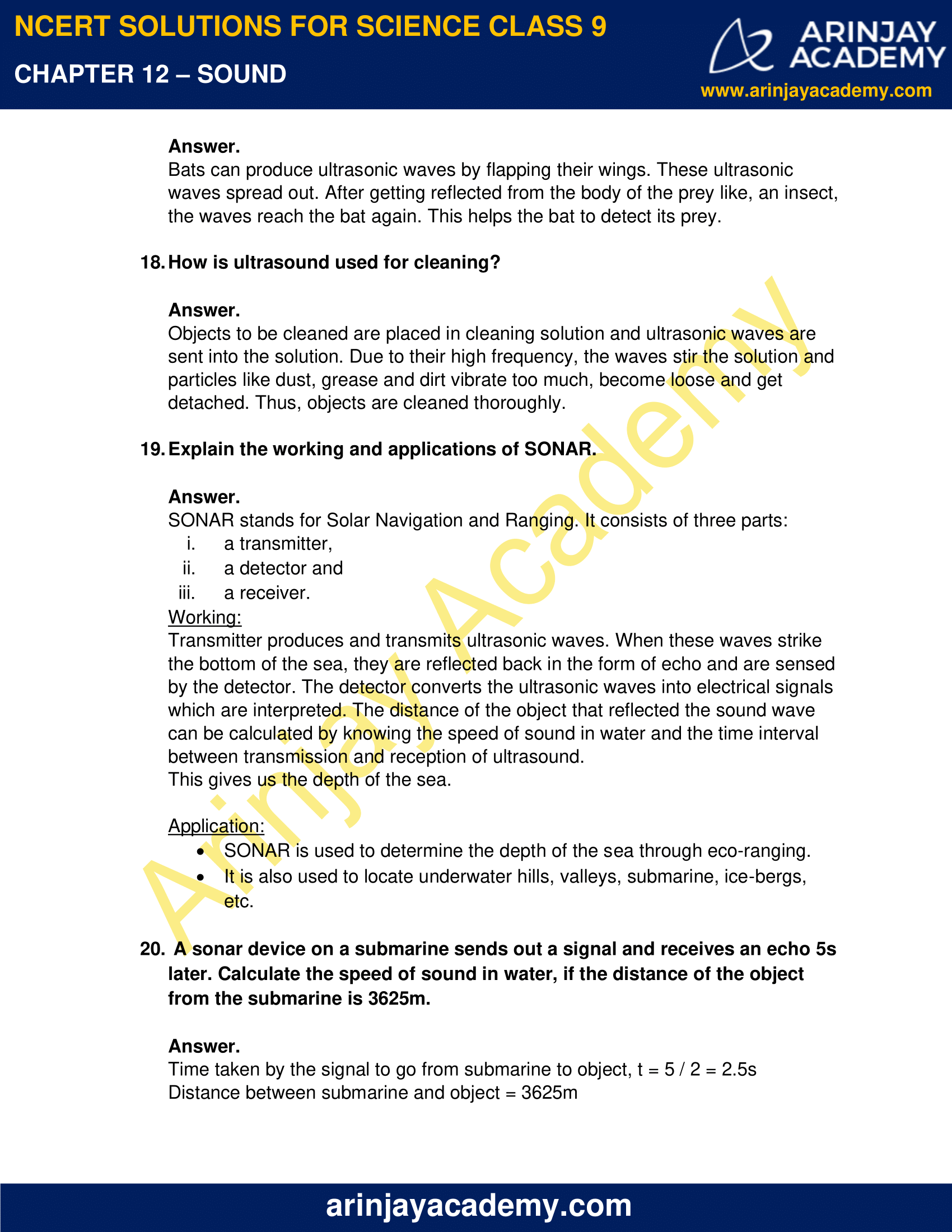 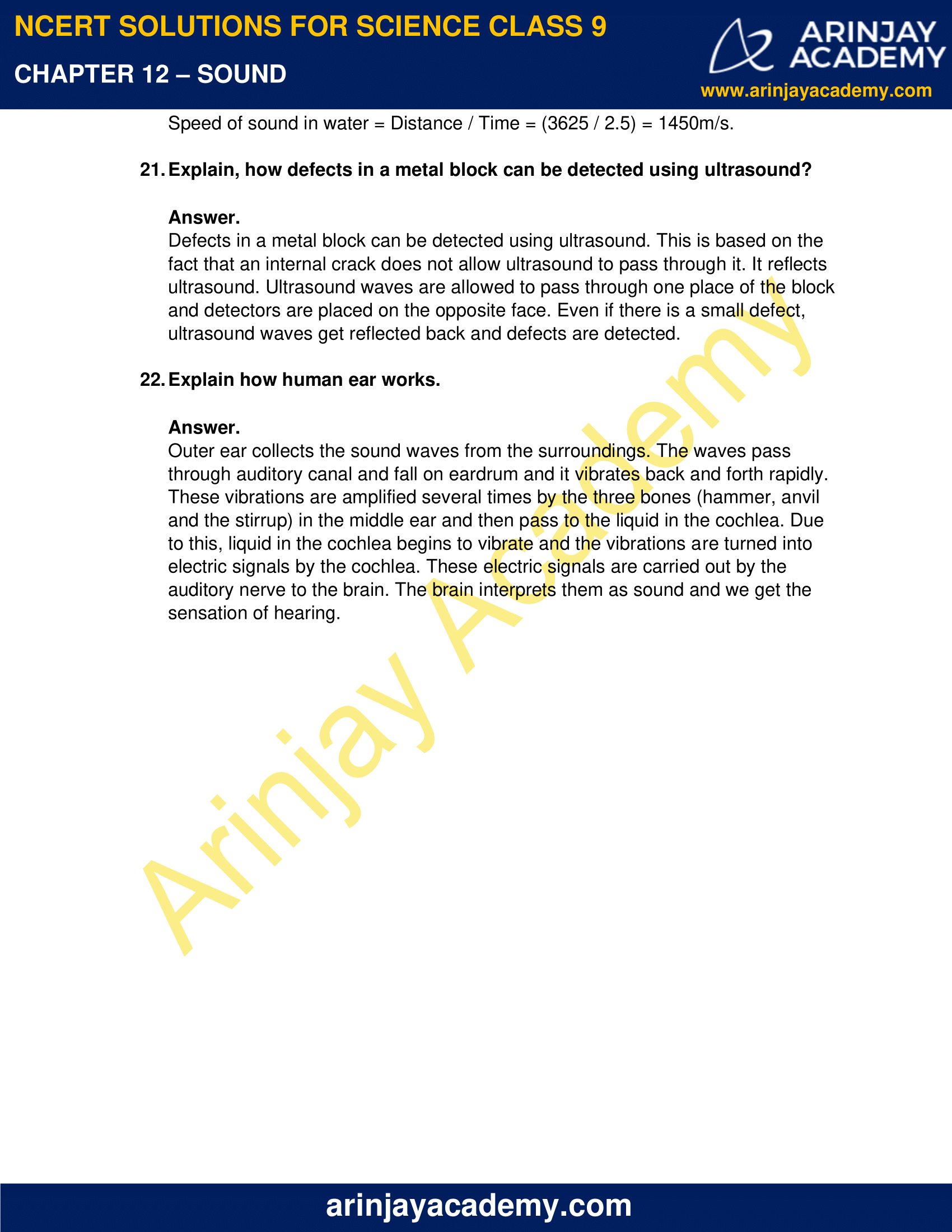 NCERT Solutions for Class 9 Science Chapter 12 – Sound, Exercises includes all in text and exercise solved questions which helps you to understand the topic covered in Chapter 12 Sound, in a better manner to help you to score good marks in your examinations.

1. How does the sound produced by a vibrating object in a medium reach your ear?

Sound is produced by vibrating objects. When an object vibrates, it sets the particles of the medium around it in vibration. The vibrations are transmitted to adjacent particles in all directions. Finally, these vibrations reach our ear and we get the sensation of hearing.

1. Explain how sound is produced by your school bell?

When the gong of the bell is struck by a hammer, it starts vibrating. Since vibrating objects produce sound, so the bell produces sound.

Sound waves are called mechanical waves because they are produced by the motion of particles of a medium and require material medium for their propagation.

3. Suppose you and your friend are on moon. Will you be able to hear any sound produced by your friend?

2. Guess which sound has higher pitch, guitar or car horn?

3. What are wavelength, time period and amplitude of sound wave?

Wavelength: The distance between two consecutive compressions or rarefactions is called the wavelength. Its SI unit is metre (m).

Time Period: Time required to produce one complete wave is called time period of the wave. Its SI unit is second(s).

Amplitude: The maximum displacement of the particles of medium from their mean position is called amplitude of the wave. Its SI unit is metre (m).

4. How are the wavelength and frequency of a sound wave related to speed?

The relation between wavelength, frequency and speed of a sound wave is –

5. Calculate the wavelength of a sound wave whose frequency is 200Hz and speed is 440m/s in the given medium.

6. A person is listening to a tone of 500 Hz sitting at a distance of 450 m from the source of sound, what is the time interval between successive compressions from the source?

Time interval between two successive compressions or rarefactions is equal to the time interval of the wave.

7. Distinguish between loudness and intensity of sound.

1. In which of the three media, air, water or iron, does the sound travel the fastest at a particular temperature?

Sound waves travel fastest in solid medium. Therefore, out of the given media, sound waves will travel the fastest in iron.

1. An echo returned in 3s. What is the distance of the reflecting surface from the source, given that the speed of sound is 342m/s?

1. Why are ceilings of conference halls curved?

Ceilings of conference halls are curved so that sound gets reflected from walls to the audience, so that every corner of the hall gets sound equally.

1. What is the audible range of average human ear?

2. What is the range of frequencies associated with

1. A submarine emits SONAR pulse which returns from an underwater cliff in 1.02s. If the speed of the sound in sea water is 1531m/s. Then how far away the cliff is?

Let the distance between submarine and cliff is ‘d’

Hence, distance between submarine and cliff is 780.81m.

1. What is sound and how is it produced?

Sound is produced when an object is set to vibrate.

2. Describe with the help of diagram, how compressions and rarefactions are produced in air near a source of sound.

When a vibrating object moves forward, it pushes the air in front of it creating a region of high pressure. It is called compression. 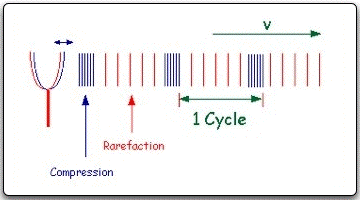 3. Cite an example to show that sound needs a material medium for its propagation. 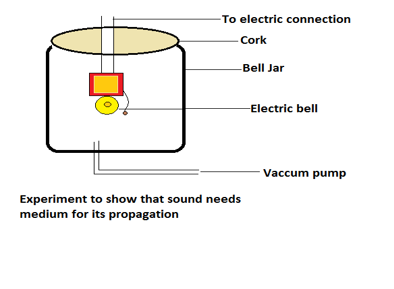 Take an electric bell and an airtight bell jar. The electric bell is suspended in the jar which is connected to a vacuum pump. If the switch is turned on, we will be able to hear the bell.  Now start the vacuum pump, the air in the jar is pumped out gradually, the sound becomes fainter. After some time when very less air is left inside the jar, we will hear very feeble sound. On removal of complete air, no sound is heard.

4. Why sound wave is called a longitudinal wave?

Sound waves are called longitudinal wave because on propagation of sound wave in a medium, the particles of the medium vibrate to and fro about their mean position and parallel to the direction of wave propagation.

5. Which characteristic of the sound helps you to identify your friend by his voice while sitting with others in a dark room?

Quality of the sound helps us to identify the person by their voice.

6. Flash and thunder are produced simultaneously. But thunder is heard a few seconds after the flash is seen. Why?

Thunder is heard a few seconds after the flash is seen because the speed of light in air (3 x 108m/s) is much higher than speed of sound which is only 330m/s. So, sound of thunder reaches us late than the flash.

7. A person was hearing range from 20 Hz to 20 kHz. What are typical wavelengths of sound waves in air corresponding to these two frequencies?(Take speed of sound in air = 344m/s)

Wavelength corresponding to frequency of 20 Hz in air,

Wavelength corresponding to frequency of 20 kHz in air,

8. Two children are at the opposite ends of an aluminium rod. One strikes the end of the rod with a stone. Find the ratio of times taken by the sound wave in air and in aluminium to reach the second child.

Time taken by the sound to travel through aluminium rod, tAl

Time taken by the sound to travel through air, tair

9. The frequency of source of sound is 100 Hz. How many times does it vibrate in a minute?

10. Does sound follow the same laws of reflection as light does? Explain.

Yes, sound follows the same laws as in case of laws of reflection of light.

11. When a sound is reflected from a distant object, an echo is produced. Let the distance between the reflecting surface and the source of sound production remains the same. Do you hear the echo on a hotter day?

where ‘v’ = speed of the sound in air

12. Give two practical applications of reflection of sound waves.

Two practical applications of reflection of sound waves are:

i. Time taken by the stone to reach the pond:

ii. Time taken by the splash sound to reach the top:

14. A sound wave travels at a speed of 339m/s. If its wavelength is 1.5cm, then what is the frequency of the wave? Will it be audible?

15. What is reverberation? How it can be reduced?

The persistence of sound in a big hall due to repeated reflections from the walls, ceilings and floor is called reverberation. It can be reduced by covering the roofs and walls of the house by sound absorbing materials.

16. What is loudness of a sound? What factors does it depend on?

Loudness of sound is the amount of sound energy reaching the ear per second.

It depends on the following factors:

i. The amplitude of vibrating body.
ii. The sensitivity of human ear.

17. Explain how bats use ultrasonic waves to catch prey.

Bats can produce ultrasonic waves by flapping their wings. These ultrasonic waves spread out. After getting reflected from the body of the prey like, an insect, the waves reach the bat again. This helps the bat to detect its prey.

18. How is ultrasound used for cleaning?

Objects to be cleaned are placed in cleaning solution and ultrasonic waves are sent into the solution. Due to their high frequency, the waves stir the solution and  particles like dust, grease and dirt vibrate too much, become loose and get detached. Thus, objects are cleaned thoroughly.

19. Explain the working and applications of SONAR.

SONAR stands for Solar Navigation and Ranging. It consists of three parts:

i. a transmitter,
ii. a detector and
iii. a receiver.

Transmitter produces and transmits ultrasonic waves. When these waves strike the bottom of the sea, they are reflected back in the form of echo and are sensed by the detector. The detector converts the ultrasonic waves into electrical signals which are interpreted. The distance of the object that reflected the sound wave can be calculated by knowing the speed of sound in water and the time interval between transmission and reception of ultrasound.

This gives us the depth of the sea.

20. A sonar device on a submarine sends out a signal and receives an echo 5s later. Calculate the speed of sound in water, if the distance of the object from the submarine is 3625m.

Distance between submarine and object = 3625m

21. Explain, how defects in a metal block can be detected using ultrasound?

Outer ear collects the sound waves from the surroundings. The waves pass through auditory canal and fall on eardrum and it vibrates back and forth rapidly. These vibrations are amplified several times by the three bones (hammer, anvil and the stirrup) in the middle ear and then pass to the liquid in the cochlea. Due to this, liquid in the cochlea begins to vibrate and the vibrations are turned into electric signals by the cochlea. These electric signals are carried out by the auditory nerve to the brain. The brain interprets them as sound and we get the sensation of hearing.