NCERT Solutions for Class 8 History Chapter 9 – The Making of the National Movement: 1870s – 1947 (Social Science), contains solutions to various questions in Exercise for Chapter 9. At the end of the Solutions, all the keywords and Notes which are important to understand From The Making of the National Movement: 1870s – 1947 Class 8 History, have been explained in a simple and easy to understand manner. We are providing NCERT Solutions for Class 8 all subjects which can be accessed by clicking here.

NCERT Solutions for Class 8 History Chapter 9 – The Making of the National Movement: 1870s – 1947 – Solutions to Question 1 to Question 4 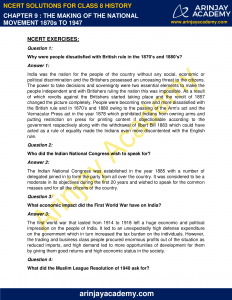 NCERT Solutions for Class 8 History Chapter 9 – The Making of the National Movement: 1870s – 1947 – Solutions to Question 4 to Question 7 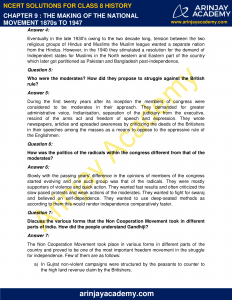 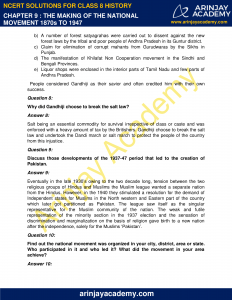 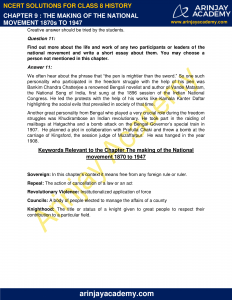 India was the nation for the people of the country without any social, economic or political discrimination and the Britishers possessed an unceasing threat to the citizens. The power to take decisions and sovereignty were two essential elements to make the people independent and with Britishers ruling the nation this was impossible. As a result of which revolts against the Britishers started taking place and the revolt of 1857 changed the picture completely. People were becoming more and more dissatisfied with the British rule and in 1870’s and 1880 owing to the passing of the Arm’s act and the Vernacular Press act in the year 1878 which prohibited Indians from owning arms and putting restriction on press for printing content if objectionable according to the government respectively along with the withdrawal of Ilbert Bill 1883 which could have acted as a rule of equality made the Indians even more discontented with the English rule.

Who did the Indian National Congress wish to speak for?

The Indian National Congress was established in the year 1885 with a number of delegated joined in to form the party from all over the country. It was considered to be a moderate in its objectives during the first 20 years and wished to speak for the common masses and for all the citizens of the country.

What economic impact did the First World War have on India?

The first world war that lasted from 1914 to 1918 left a huge economic and political impression on the people of India. It led to an unexpectedly high defense expenditure on the government which in turn increased the tax burden on the individuals. However, the trading and business class people procured enormous profits out of the situation as reduced imports, and high demand led to more opportunities of development for them by giving them good returns and high economic status in the society.

What did the Muslim League Resolution of 1940 ask for?

Eventually in the late 1930’s owing to the two decade long, tension between the two religious groups of Hindus and Muslims the Muslim league wanted a separate nation from the Hindus. However, in the 1940 they stimulated a resolution for the demand of Independent states for Muslims in the North western and Eastern part of the country which later got partitioned as Pakistan and Bangladesh post-independence.

Who were the moderates? How did they propose to struggle against the British rule?

During the first twenty years after its inception the members of congress were considered to be moderates in their approach. They demanded for greater administrative voice, Indianisation, separation of the judiciary from the executive, rescind of the arms act and freedom of speech and expression. They wrote newspapers, articles and spreaded awareness by criticizing the deeds of the Britishers in their speeches among the masses as a means to oppose to the oppressive rule of the Englishmen.

How was the politics of the radicals within the congress different from that of the moderates?

Slowly with the passing years’ difference in the opinions of members of the congress started evolving and one such group was that of the radicals. They were mostly supporters of violence and quick action. They wanted fast results and often criticized the slow paced protests and weak actions of the moderates. They wanted to fight for swaraj and believed on self-dependence. They wanted to use deep-seated methods as according to them this would render independence comparatively faster.

Discuss the various forms that the Non Cooperation Movement took in different parts of India. How did the people understand Gandhiji?

The Non Cooperation Movement took place in various forms in different parts of the country and proved to be one of the most important freedom movement in the struggle for independence. Few of them are as follows:

(a)In Gujrat non-violent campaigns were structured by the peasants to counter to the high land revenue claim by the Britishers.

(b)A number of forest satyagrahas were carried out to dissent against the new forest laws by the tribal and poor people of Andhra Pradesh in its Guntur district.

(c)Claim for elimination of corrupt mahants from Gurudwaras by the Sikhs in Punjab.

(d)The manifestation of Khilafat Non Cooperation movement in the Sindhi and Bengali Provinces.

(e)Liquor shops were enclosed in the interior parts of Tamil Nadu and few parts of Andhra Pradesh.

People considered Gandhiji as their savior and often credited him with their own success.

Why did Gandhiji choose to break the salt law?

Salt being an essential commodity for survival irrespective of class or caste and was enforced with a heavy amount of tax by the Britishers. Gandhiji choose to break the salt law and undertook the Dandi march or salt march to protect the people of the country from this injustice.

Discuss those developments of the 1937-47 period that led to the creation of Pakistan.

Eventually in the late 1930’s owing to the two decade long, tension between the two religious groups of Hindus and Muslims the Muslim league wanted a separate nation from the Hindus. However, in the 1940 they stimulated a resolution for the demand of Independent states for Muslims in the North western and Eastern part of the country which later got partitioned as Pakistan. The league saw itself as the singular representative for the Muslim community of the nation. The weak and futile representation of the minority section in the 1937 election and the sensation of discrimination and marginalization on the basis of religion gave birth to a new nation after the independence, solely for the Muslims ‘Pakistan’.

Find out the national movement was organized in your city, district, area or state. Who participated in it and who led it? What did the movement in your area achieve?

Creative answer should be tried by the students.

Find out more about the life and work of any two participants or leaders of the national movement and write a short essay about them. You may choose a person not mentioned in this chapter.

We often hear about the phrase that “the pen is mightier than the sword.” So one such personality who participated in the freedom struggle with the help of his pen was Bankim Chandra Chatterjee a renowned Bengali novelist and author of Vande Mataram, the National Song of India, first sung at the 1896 session of the Indian National Congress. He led the protests with the help of his works like Kamala Kanter Daftar highlighting the social evils that prevailed in society of that time.

Another great personality from Bengal who played a very crucial role during the freedom struggles was Khudirambose an Indian revolutionary. He took part in the raiding of mailbags at Hatgachha and a bomb attack on the Bengal Governor’s special train in 1907.  He planned a plot in collaboration with Prafulla Chaki and threw a bomb at the carriage of Kingsford, the session judge of Muzaffarpur.  He was hanged in the year 1908.

Sovereign: In this chapter’s context it means free from any foreign rule or ruler.

Repeal: The action of cancellation of a law or an act

Councils: A body of people elected to manage the affairs of a county

Knighthood: The title or status of a knight given to great people to respect their contribution to a particular field.