NCERT Solutions for Class 8 History Chapter 8 – Women, Caste and Reform (Social Science), contains solutions to various questions in Exercise for Chapter 8. At the end of the Solutions, all the keywords and Notes which are important to understand From Women, Caste and Reform Class 8 History, have been explained in a simple and easy to understand manner. We are providing NCERT Solutions for Class 8 all subjects which can be accessed by clicking here. 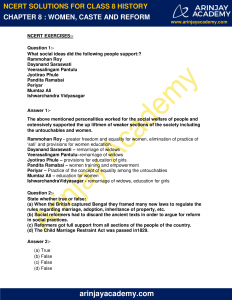 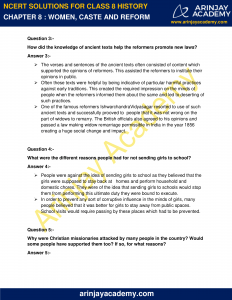 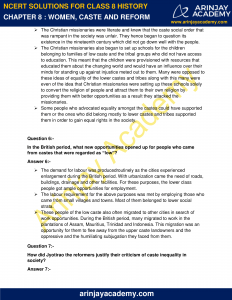 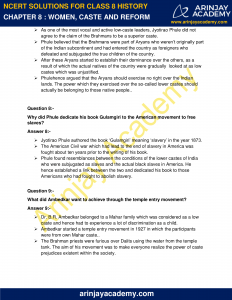 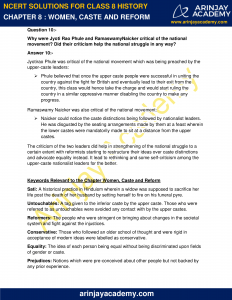 What social ideas did the following people support:?

The above mentioned personalities worked for the social welfare of people and extensively supported the up liftmen of weaker sections of the society including the untouchables and women.

Rammohan Roy – greater freedom and equality for women, elimination of practice of ‘sati’ and provisions for women education.

Periyar – Practice of the concept of equality among the untouchables

(a) When the British captured Bengal they framed many new laws to regulate the rules regarding marriage, adoption, inheritance of property, etc.

(b) Social reformers had to discard the ancient texts in order to argue for reform in social practices.

(c) Reformers got full support from all sections of the people of the country.

(d) The Child Marriage Restraint Act was passed in1829.

How did the knowledge of ancient texts help the reformers promote new laws?

What were the different reasons people had for not sending girls to school?

Why were Christian missionaries attacked by many people in the country? Would some people have supported them too? If so, for what reasons?

In the British period, what new opportunities opened up for people who came from castes that were regarded as “low”?

How did Jyotirao the reformers justify their criticism of caste inequality in society?

Why did Phule dedicate his book Gulamgiri to the American movement to free slaves?

What did Ambedkar want to achieve through the temple entry movement?

Why were Jyoti Rao Phule and RamaswamyNaicker critical of the national movement? Did their criticism help the national struggle in any way?

Jyotirao Phule was critical of the national movement which was being preached by the upper-caste leaders:

Ramaswamy Naicker was also critical of the national movement:

The criticism of the two leaders did help in strengthening of the national struggle to a certain extent with reformists starting to restructure their ideas over caste distinctions and advocate equality instead. It lead to rethinking and some self-criticism among the upper-caste nationalist leaders for the better.

Sati: A historical practice in Hinduism wherein a widow was supposed to sacrifice her life post the death of her husband by setting herself to fire on his funeral pyre.

Reformers: The people who were stringent on bringing about changes in the societal system and fight against the injustices.

Conservative: Those who followed an older school of thought and were rigid in acceptance of modern ideas were labelled as conservative.

Equality: The idea of each person being equal without being discriminated upon fields of gender or caste.

Prejudices: Notions which were pre-conceived about other people but not backed by any prior experience.