NCERT Solutions for Class 8 History Chapter 2 – From Trade to Territory (Social Science), contains solutions to various questions in Exercise for Chapter 2. At the end of the Solutions, all the keywords and Notes which are important to understand From From Trade to Territory Class 8 History, have been explained in a simple and easy to understand manner. We are providing NCERT Solutions for Class 8 all subjects which can be accessed by clicking here. 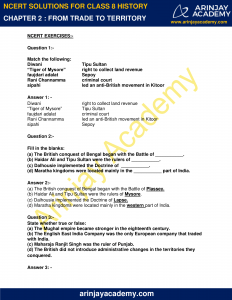 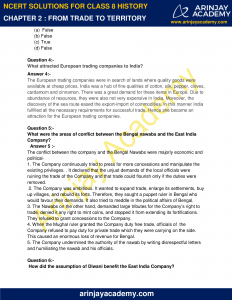 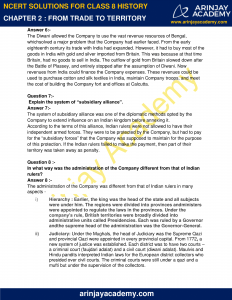 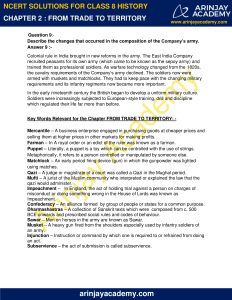 (a) The British conquest of Bengal began with the Battle of Plassey.

(b) Haidar Ali and Tipu Sultan were the rulers of Mysore.

(d) Maratha kingdoms were located mainly in the western part of India.

(a) The Mughal empire became stronger in the eighteenth century.

(b) The English East India Company was the only European company that traded with India.

(c) Maharaja Ranjit Singh was the ruler of Punjab.

(d) The British did not introduce administrative changes in the territories they conquered.

The European trading companies were in search of lands where quality goods were available at cheap prices. India was a hub of fine qualities of cotton, silk, pepper, cloves, cardamom and cinnamon. There was a great demand for these items in Europe. Due to abundance of resources, they were also not very expensive in India. Moreover, the discovery of the sea route eased the export-import of commodities. In this manner India fulfilled all the necessary requirements for successful trade. Hence she became an attraction for the European trading companies.

What were the areas of conflict between the Bengal nawabs and the East India Company?

How did the assumption of Diwani benefit the East India Company?

The Diwani allowed the Company to use the vast revenue resources of Bengal, whichsolved a major problem that the Company had earlier faced. From the early eighteenth century its trade with India had expanded. However, it had to buy most of the goods in India with gold and silver imported from Britain. This was because at that time Britain, had no goods to sell in India. The outflow of gold from Britain slowed down after the Battle of Plassey, and entirely stopped after the assumption of Diwani. Now revenues from India could finance the Company expenses. These revenues could be used to purchase cotton and silk textiles in India, maintain Company troops, and meet the cost of building the Company fort and offices at Calcutta.

Explain the system of “subsidiary alliance”.

The system of subsidiary alliance was one of the diplomatic methods opted by the Company to extend influence on an Indian kingdom before annexing it.

According to the terms of this alliance, Indian rulers were not allowed to have their independent armed forces. They were to be protected by the Company, but had to pay for the “subsidiary forces” that the Company was supposed to maintain for the purpose of this protection. If the Indian rulers failed to make the payment, then part of their territory was taken away as penalty.

In what way was the administration of the Company different from that of Indian rulers?

(i) Hierarchy : Earlier, the king was the head of the state and all subjects were under him. The regions were divided into provinces andministers were appointed to regulate the laws in the provinces. Under the company’s rule, British territories were broadly divided into administrative units called Presidencies. Each was ruled by a Governor andthe supreme head of the administration was the Governor-General.

(ii) Judiciary: Under the Mughals, the head of Judiciary was the Supreme Qazi and provincial Qazi were appointed in every provincial capital. From 1772, a new system of justice was established. Each district was to have two courts – a criminal court (faujdari adalat) and a civil court (diwani adalat). Maulvis and Hindu pandits interpreted Indian laws for the European district collectors who presided over civil courts. The criminal courts were still under a qazi and a mufti but under the supervision of the collectors.

Describe the changes that occurred in the composition of the Company’s army.

Colonial rule in India brought in new reforms in the army. The East India Company recruited peasants for its own army (which came to be known as the sepoy army) and trained them as professional soldiers. As warfare technology changed from the 1820s, the cavalry requirements of the Company’s army declined. The soldiers now were armed with muskets and matchlocks. They had to keep pace with the changing military requirements and its infantry regiments now became more important.

In the early nineteenth century the British began to develop a uniform military culture. Soldiers were increasingly subjected to European-style training, drill and discipline which regulated their life far more than before.

Mercantile – A business enterprise engaged in purchasing goods at cheaper prices and selling them at higher prices in other markets for making profits.

Farman – In A royal order or an edict of the ruler was known as a farman.

Puppet – Literally, a puppet is a toy which can be controlled with the use of strings. Metaphorically, it refers to a person controlled or manipulated by someone else.

Matchlock – An early period firing device (gun) in which the gunpowder was lighted using matches.

Qazi – A judge or magistrate of a court was called a Qazi in the Mughal period.

Mufti – A jurist of the Muslim community who interpreted or explained the law that the qazi would administer.

Impeachment –   In England, the act of holding trial against a person on charges of misconduct or doing something wrong in the House of Lords was known as Impeachment.

Confederacy – An alliance formed  by group of people or states for a common purpose.

Dharmashastras – A collection of Sanskrit texts which were  composed from c. 500 BCE onwards and prescribed social rules and codes of behaviour.

Sawar – Men on horses in the army are known as Sawar.

Musket – A heavy gun fired from the shoulders especially used by infantry soldiers of an army.

Injunction – Instruction or command by which one is required to or refrained from doing an act.

Subservience – the act of submission is called subservience.