NCERT Solutions for Class 8 History Chapter 6 – Weavers, Iron Smelters and Factory Owners (Social Science), contains solutions to various questions in Exercise for Chapter 6. At the end of the Solutions, all the keywords and Notes which are important to understand From Weavers, Iron Smelters and Factory Owners Class 8 History, have been explained in a simple and easy to understand manner. We are providing NCERT Solutions for Class 8 all subjects which can be accessed by clicking here. 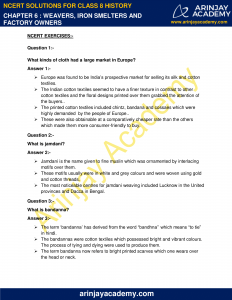 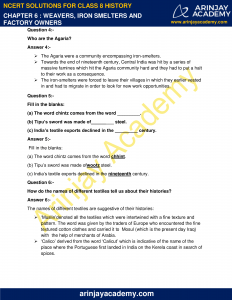 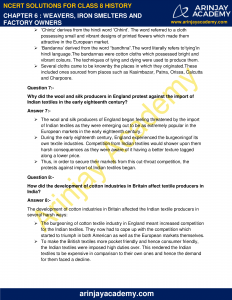 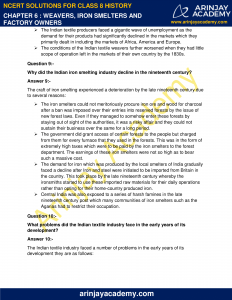 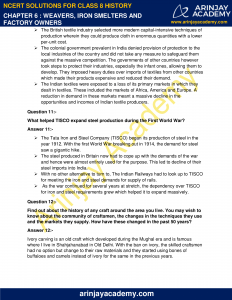 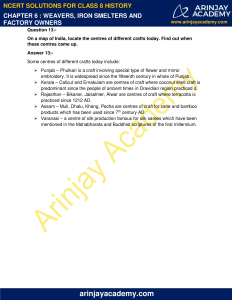 NCERT Solutions for Class 8 History Chapter 6 – Weavers, Iron Smelters and Factory Owners Exercises includes –Fill in the Blanks and Question/Answers which helps you to understand the topic covered in Weavers, Iron Smelters and Factory Owners Class 8 History (Social Science), in a better manner to help you to score good marks in your examinations.

What kinds of cloth had a large market in Europe?

Who are the Agaria?

(a) The word chintz comes from the word chhint.

(b) Tipu’s sword was made ofwootz steel.

How do the names of different textiles tell us about their histories?

The names of different textiles are suggestive of their histories:

Why did the wool and silk producers in England protest against the import of Indian textiles in the early eighteenth century?

How did the development of cotton industries in Britain affect textile producers in India?

The development of cotton industries in Britain affected the Indian textile producers in several harsh ways:

Why did the Indian iron smelting industry decline in the nineteenth century?

The craft of iron smelting experienced a deterioration by the late nineteenth century due to several reasons:

What problems did the Indian textile industry face in the early years of its development?

The Indian textile industry faced a number of problems in the early years of its development they are as follows:

Find out about the history of any craft around the area you live. You may wish to know about the community of craftsmen, the changes in the techniques they use and the markets they supply. How have these changed in the past 50 years?

Ivory carving is an old craft which developed during the Mughal era and is famous where I live in Shahjahanabad in Old Delhi. With the ban on ivory, the skilled craftsmen had no option but change to their raw materials and they started using bones of buffaloes and camels instead of ivory for the same in the previous years.

On a map of India, locate the centres of different crafts today. Find out when these centres came up.

Some centres of different crafts today include:

Spinning Jenny: A machine used for spinning of thread. Several threads could be spun by a single worker making use of this technology.

Aurang: A warehouse is called an ‘Aurang’ in the Persian language. The goods are collected and stored as inventory before they are transported for sale in these warehouses.

Smelting: The process of heating rocks or soil at a very high temperature in order to obtain metal from them or melting up of existing metals to form something new out of them.

Bellows: An equipment consisting of an air bag used to pump air for purposes such as keeping charcoal at a burning state.

Slag heaps: When metal is smelted after passing through the process of being subjected to high temperature, a certain waste is left behind. These wastes refer to slag heaps.