NCERT Solutions for Class 8 History Chapter 3 – Ruling the Countryside (Social Science), contains solutions to various questions in Exercise for Chapter 3. At the end of the Solutions, all the keywords and Notes which are important to understand From Ruling the Countryside Class 8 History, have been explained in a simple and easy to understand manner. We are providing NCERT Solutions for Class 8 all subjects which can be accessed by clicking here. 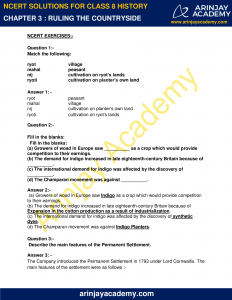 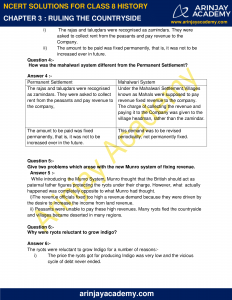 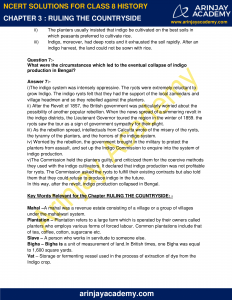 (a) Growers of woad in Europe saw __________ as a crop which would provide competition to their earnings.

(b) The demand for indigo increased in late eighteenth-century Britain because of __________.

(c) The international demand for indigo was affected by the discovery of __________.

(a) Growers of woad in Europe saw Indigo as a crop which would provide competition to their earnings.

(b) The demand for indigo increased in late eighteenth-century Britain because of Expansion in the cotton production as a result of industrialization.

(c) The international demand for indigo was affected by the discovery of synthetic dyes.

(d) The Champaran movement was against Indigo Planters.

Describe the main features of the Permanent Settlement.

The Company introduced the Permanent Settlement in 1793 under Lord Cornwallis. The main features of the settlement were as follows :-

(i)The rajas and taluqdars were recognised as zamindars. They were asked to collect rent from the peasants and pay revenue to the Company.

(ii)The amount to be paid was fixed permanently, that is, it was not to be increased ever in future.

How was the mahalwari system different from the Permanent Settlement?

Give two problems which arose with the new Munro system of fixing revenue.

While introducing the Munro System, Munro thought that the British should act as paternal father figures protecting the ryots under their charge. However, what  actually happened was completely opposite to what Munro had thought.

(i)The revenue officials fixed too high a revenue demand because they were driven by the desire to increase the income from land revenue.

(ii) Peasants were unable to pay these high revenues. Many ryots fled the countryside and villages became deserted in many regions.

Why were ryots reluctant to grow indigo?

The ryots were reluctant to grow Indigo for a number of reasons:-

(i)The price the ryots got for producing Indigo was very low and the vicious cycle of debt never ended.

(ii)The planters usually insisted that indigo be cultivated on the best soils in which peasants preferred to cultivate rice.

(iii)Indigo, moreover, had deep roots and it exhausted the soil rapidly. After an indigo harvest, the land could not be sown with rice.

What were the circumstances which led to the eventual collapse of indigo production in Bengal?

(i) The indigo system was intensely oppressive. The ryots were extremely reluctant to grow Indigo. The indigo ryots felt that they had the support of the local zamindars and village headmen and so they rebelled against the planters.

(ii) After the Revolt of 1857, the British government was particularly worried about the possibility of another popular rebellion. When the news spread of a simmering revolt in the indigo districts, the Lieutenant Governor toured the region in the winter of 1859. the ryots saw the tour as a sign of government sympathy for their plight.

(iii) As the rebellion spread, intellectuals from Calcutta wrote of the misery of the ryots, the tyranny of the planters, and the horrors of the indigo system.

(iv) Worried by the rebellion, the government brought in the military to protect the planters from assault, and set up the Indigo Commission to enquire into the system of indigo production.

(v) The Commission held the planters guilty, and criticized them for the coercive methods they used with the indigo cultivators. It declared that indigo production was not profitable for ryots. The Commission asked the ryots to fulfill their existing contracts but also told them that they could refuse to produce indigo in the future.

In this way, after the revolt, indigo production collapsed in Bengal.

Mahal –A mahal was a revenue estate consisting of a village or a group of villages under the mahalwari system.

Plantation – Plantation refers to a large farm which is operated by their owners called planters who employs various forms of forced labour. Common plantations include that of tea, coffee, cotton, sugarcane etc.

Slave – A person who works in servitude to someone else.

Bigha – Bigha is a unit of measurement of land.In British times, one Bigha was equal to 1,600 square yards.

Vat – Storage or fermenting vessel used in the process of extraction of dye from the Indigo crop.