NCERT Solutions for Class 8 History Chapter 7 – Civilising the “Native”, Educating the Nation (Social Science), contains solutions to various questions in Exercise for Chapter 7. At the end of the Solutions, all the keywords and Notes which are important to understand From Civilising the “Native”, Educating the Nation Class 8 History, have been explained in a simple and easy to understand manner. We are providing NCERT Solutions for Class 8 all subjects which can be accessed by clicking here. 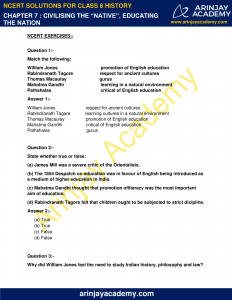 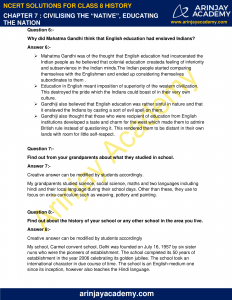 NCERT Solutions for Class 8 History Chapter 7 – Civilising the “Native”, Educating the Nation Exercises includes –Match the following, True/False and Question/Answers which helps you to understand the topic covered in Civilising the “Native”, Educating the Nation Class 8 History (Social Science), in a better manner to help you to score good marks in your examinations.

(a) James Mill was a severe critic of the Orientalists.

(b) The 1854 Despatch on education was in favour of English being introduced as a medium of higher education in India.

(c) Mahatma Gandhi thought that promotion ofliteracy was the most important aim of education.

(d) Rabindranath Tagore felt that children ought to be subjected to strict dicipline.

Why did William Jones feel the need to study Indian history, philosophy and law?

Why did James Mill and Thomas Macaulay think that European education was essential in India?

Why did Mahatma Gandhi want to teach children handicrafts?

Why did Mahatma Gandhi think that English education had enslaved Indians?

Find out from your grandparents about what they studied in school.

My grandparents studied science, social science, maths and two languages including hindi and their local language during their school days. Other than these, they use to focus on extra-curriculum such as weaving, pottery and painting.

Find out about the history of your school or any other school in the area you live.

Creative answer can be modified by students accordingly

My school, Carmel convent school, Delhi was founded on July 16, 1957 by six sister nuns who were the pioneers of establishment. The school completed its 50 years of establishment in the year 2006 celebrating its golden jubilee. The school took an international character in due course of time. The school is an English-medium one since its inception, however also teaches the Hindi language.

Keywords Relevant to the Chapter Civilising the “Native”, Educating the Nation

Linguist: A literate man with knowledge of and ability to speak various languages.

Madrasa: An educational institution is termed as Madrasa in Arabic language.

Orientalists: People who have studied and gained scholarly expertise in being educated of the culture and languages of Asian continent.

Munshi: A literate man who is capable of reading, writing and teaching the Persian language.

Vernacular: A local language used in an area or region which is different from the national language of the country.