NCERT Solutions for Class 8 History Chapter 5 – When People Rebel 1857 and After (Social Science), contains solutions to various questions in Exercise for Chapter 5. At the end of the Solutions, all the keywords and Notes which are important to understand From When People Rebel 1857 and After Class 8 History, have been explained in a simple and easy to understand manner. We are providing NCERT Solutions for Class 8 all subjects which can be accessed by clicking here. 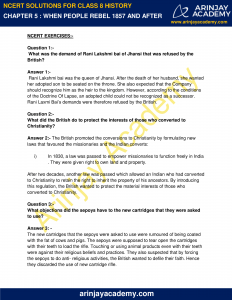 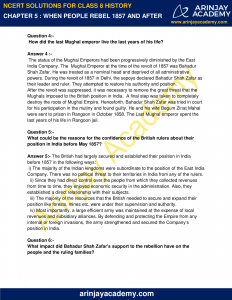 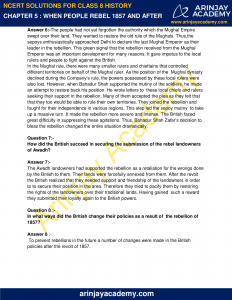 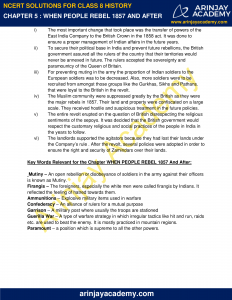 What was the demand of Rani Lakshmi bai of Jhansi that was refused by the British?

Rani Lakshmi bai was the queen of Jhansi. After the death of her husband, she wanted her adopted son to be seated on the throne. She also expected that the Company should recognize him as the heir to the kingdom. However, according to the conditions of the Doctrine Of Lapse, an adopted child could not be recognized as a successor. Rani Laxmi Bai’s demands were therefore refused by the British.

What did the British do to protect the interests of those who converted to Christianity?

Answer 2:- The British promoted the conversions to Christianity by formulating new laws that favoured the missionaries and the Indian converts:

(i)In 1830, a law was passed to empower missionaries to function freely in India . They were given right to own land and property.

What objections did the sepoys have to the new cartridges that they were asked to use?

The new cartridges that the sepoys were asked to use were rumoured of being coated with the fat of cows and pigs. The sepoys were supposed to tear open the cartridges with their teeth to load the rifle. Touching or using animal products even with their teeth were against their religious beliefs and practices. They also suspected that by forcing the sepoys to do anti- religious activities, the British wanted to defile their faith. Hence they discarded the use of new cartridge rifle.

How did the last Mughal emperor live the last years of his life?

The status of the Mughal Emperors had been progressively diminished by the East India Company. The  Mughal Emperor at the time of the revolt of 1857 was Bahadur Shah Zafar. He was treated as a nominal head and deprived of all administrative powers. During the revolt of 1857 in Delhi, the sepoys declared Bahadur Shah Zafar as their leader and ruler. They attempted to restore his authority and position.

After the revolt was suppressed, it was necessary to remove the great threat that the Mughals imposed to the British position in India.  A final step was taken to completely destroy the roots of Mughal Empire. Henceforth, Bahadur Shah Zafar was tried in court for his participation in the mutiny and found guilty. He and his wife Begum Zinat Mahal were sent to prison in Rangoon in October 1858. The Last Mughal emperor spent the last years of his life in Rangoon jail.

What could be the reasons for the confidence of the British rulers about their position in India before May 1857?

Answer 5:- The British had largely secured and established their position in India before 1857 in the following ways:

(i) The majority of the Indian kingdoms were subordinate to the position of the East India Company. There was no political threat to their territories in India from any of the rulers.

(ii) Since they had direct control over the people from which they collected revenues from time to time, they enjoyed economic security in the administration. Also, they established a direct relationship with their subjects.

(iii) The majority of the resources that the British needed to secure and expand their position like forests, mines etc. were under their supervision and authority.

(iv) Most importantly, a large efficient army was maintained at the expense of local revenues and subsidiary alliances. By defending and protecting the Empire from any internal or foreign invasions, the army strengthened and secured the Company’s position in India.

What impact did Bahadur Shah Zafar’s support to the rebellion have on the people and the ruling families?

Answer 6:-The people had not yet forgotten the authority which the Mughal Empire swept over their land. They wanted to restore the old rule of the Mughals. Thus,the sepoys enthusiastically approached Delhi to declare the last Mughal Emperor as their leader in the rebellion. This green signal that the rebellion received from the Mughal Emperor was an important development for many reasons. It gave impetus to the local rulers and people to fight against the British.

In the Mughal rule, there were many smaller rulers and chieftains that controlled different territories on behalf of the Mughal ruler. As the position of the  Mughal dynasty declined during the Company’s rule, the powers possessed by these local rulers were also lost. However, when Bahadur Shah supported the mutiny of the soldiers, he made an attempt to restore back his position. He wrote letters to  these local chiefs and rulers seeking their support in the rebellion. Many of them accepted the plea as they felt that that they too would be able to rule their own territories. They joined the rebellion and fought for their independence in various regions. This step led the sepoy mutiny  to take up a massive turn .It made the rebellion more severe and intense. The British faced great difficulty in suppressing these agitations. Thus, Bahadur Shah Zafar’s decision to bless the rebellion changed the entire situation dramatically.

How did the British succeed in securing the submission of the rebel landowners of Awadh?

The Awadh landowners had supported the rebellion as a retaliation for the wrongs done by the British to them. Their lands were forcefully annexed from them. After the revolt the British realized that they needed support and friendship of the landowners in order to to secure their position in the area. Therefore they tried to pacify them by restoring the rights of the landowners over their traditional lands. Having gained  such a reward they submitted their loyalty again to the British powers.

In what ways did the British change their policies as a result of  the rebellion of 1857?

To prevent rebellions in the future a number of changes were made in the British policies after the revolt of 1857.

(i)The most important change that took place was the transfer of powers of the East India Company to the British Crown in the 1858 act. It was done to ensure a proper management of Indian affairs in the future years.

(ii)To secure their political base in India and prevent future rebellions, the British government assured all the rulers of the country that their territories would never be annexed in future. The rulers accepted the sovereignty and paramountcy of the Queen of Britain.

(iii)For preventing muting in the army the proportion of Indian soldiers to the European soldiers was to be decreased. Also, more soldiers were to be recruited from amongst those groups like the Gurkhas, Sikhs and Pathans that were loyal to the British in the revolt.

(iv)The Muslim community were suppressed greatly by the British as they were the major rebels in 1857. Their land and property were confiscated on a large scale. They received hostile and suspicious treatment in the future policies.

(v)The entire revolt erupted on the question of British disrespecting the religious sentiments of the sepoys. It was decided that the British government would respect the customary religious and social practices of the people in India in the years to follow.

(vi)The landlords supported the agitators because they had lost their lands under the Company’s rule . After the revolt, several policies were adopted in order to ensure the right and security of Zamindars over their lands.

Important Terms Relevant for NCERT Solutions for Class 8 History Chapter 5 – When People Rebel 1857 and After:

Mutiny – An open rebellion or disobeyance of soldiers in the army against their officers is known as Mutiny.

Firangis – The foreigners, especially the white men were called firangis by Indians. It reflected the feeling of hatred towards them.

Confederacy – An alliance of rulers for a mutual purpose

Garrison – A military post where usually the troops are stationed

Guerilla War – A type of warfare strategy in which irregular tactics like hit and run, raids etc. are used to beat the enemy. It is mostly practiced in mountain regions.

Paramount – a position which is supreme to all the other powers.