NCERT Solutions for Class 7 Civics Chapter 9 Struggles for Equality (Social Science), contains solutions to various questions in Exercise for Chapter 9. At the end of the Solutions, all the keywords and Notes which are important to understand Chapter 9 Struggles for Equality Class 7 Civics, have been explained in a simple and easy to understand manner. We are providing NCERT Solutions for Class 7 all subjects which can be accessed by clicking here. 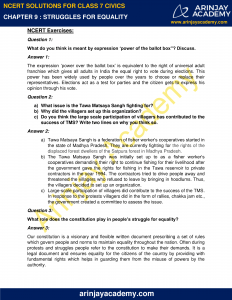 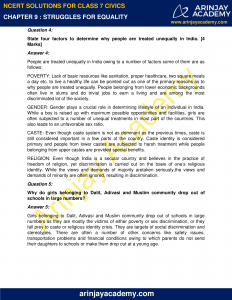 What do you think is meant by expression ‘power of the ballot box”? Discuss.

The expression ‘power over the ballot box’ is equivalent to the right of universal adult franchise which gives all adults in India the equal right to vote during elections. This power has been widely used by people over the years to choose or replace their representatives. Elections act as a test for parties and the citizen gets to express his opinion through his vote.

(b)Why did the villagers set up this organization?

(c)Do you think the large scale participation of villagers has contributed to the success of TMS? Write two lines on why you think so.

(a)Tawa Matsaya Sangh is a federation of fisher worker’s cooperatives started in the state of Madhya Pradesh. They are currently fighting for the rights of the displaced forest dwellers of the Satpura forest in Madhya Pradesh.

(b)The Tawa Matsaya Sangh was initially set up to as a fisher worker’s cooperatives demanding their right to continue fishing for their livelihood after the government gave the rights for fishing in the Tawa reservoir to private contractors in the year 1994. The contractors tried to drive people away and threatened the villagers who refused to leave by bringing in hoodlums. Thus, the villagers decided to set up an organization.

(c)Large-scale participation of villagers did contribute to the success of the TMS. In response to the protests villagers did in the form of rallies, chakka jam etc., the government created a committee to assess the issue.

What role does the constitution play in people’s struggle for equality?

Our constitution is a visionary and flexible written document prescribing a set of rules which govern people and norms to maintain equality throughout the nation. Often during protests and struggles people refer to the constitution to make their demands. It is a legal document and ensures equality for the citizens of the country by providing with fundamental rights which helps in guarding them from the misuse of powers by the authority.

State four factors to determine why people are treated unequally in India. [4 Marks]

People are treated unequally in India owing to a number of factors some of them are as follows:

POVERTY: Lack of basic resources like sanitation, proper healthcare, two square meals a day etc. to live a healthy life can be pointed out as one of the primary reasons as to why people are treated unequally. People belonging from lower economic backgrounds often live in slums and do trivial jobs to earn a living and are among the most discriminated lot of the society.

GENDER: Gender plays a crucial role in determining lifestyle of an individual in India. While a boy is raised up with maximum possible opportunities and facilities, girls are often subjected to a number of unequal treatments in most part of the countries. This also leads to an unfavorable sex ratio.

CASTE: Even though caste system is not as dominant as the previous times, caste is still considered important in a few parts of the country. Caste identity is considered primary and people from lower castes are subjected to harsh treatment while people belonging from upper castes are provided special benefits.

Why do girls belonging to Dalit, Adivasi and Muslim community drop out of schools in large numbers?

Girls belonging to Dalit, Adivasi and Muslim community drop out of schools in large numbers as they are mostly the victims of either poverty or sex discrimination, or they fall prey to caste or religious identity crisis. They are targets of social discrimination and stereotypes. There are often a number of other concerns like safety issues, transportation problems and financial conditions owing to which parents do not send their daughters to schools or make them drop out at a young age.

Equality: When two different groups of people are not discriminated on the basis of their caste, social or religious identity then it can be termed as equality.

Dalit community: A particular community of people often considered as untouchables for their particular caste identity or on the basis of the jobs they do.

Constitution: It is a legal document laying down a set of rules for ensuring proper functioning of democracy in a country.

Ballot Box: A sealed box mainly used by voters to put their vote sheets to keep them undisclosed and stealthy till the time of counting.