NCERT Solutions for Class 7 Civics Chapter 1 On Equality (Social Science), contains solutions to various questions in Exercise for Chapter 1.At the end of the Solutions, all the keywords and Notes which are important to understand Chapter 1 On Equality Class 7 Civics, have been explained in a simple and easy to understand manner. We are providing NCERT Solutions for Class 7 all subjects which can be accessed by clicking here. 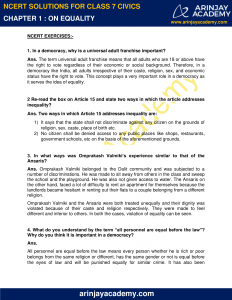 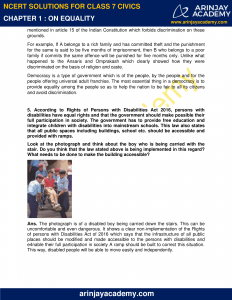 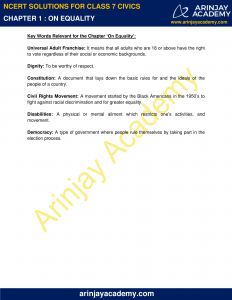 NCERT Solutions for Class 7 Civics Chapter 1 – On Equality Exercises includes – Questions/Answers which helps you to understand the topic covered in On Equality Class 7 Civics (Social Science), in a better manner to help you to score good marks in your examinations.

In a democracy, why is a universal adult franchise important?

The term universal adult franchise means that all adults who are 18 or above have the right to vote regardless of their economic or social background. Therefore, in a democracy like India, all adults irrespective of their caste, religion, sex, and economic status have the right to vote. This concept plays a very important role in a democracy as it serves the idea of equality.

Re-read the box on Article 15 and state two ways in which the article addresses inequality?

Two ways in which Article 15 addresses inequality are:

In what ways was Omprakash Valmiki’s experience similar to that of the Ansaris?

Omprakash Valmiki belonged to the Dalit community and was subjected to a number of discriminations. He was made to sit away from others in the class and sweep the school and the playground. He was also not given access to water. The Ansaris on the other hand, faced a lot of difficulty to rent an apartment for themselves because the landlords became hesitant in renting out their flats to a couple belonging from a different religion.

Omprakash Valmiki and the Ansaris were both treated unequally and their dignity was violated because of their caste and religion respectively. They were made to feel different and inferior to others. In both the cases, violation of equality can be seen.

What do you understand by the term “all personnel are equal before the law”? Why do you think it is important in a democracy?

All personnel are equal before the law means every person whether he is rich or poor belongs from the same religion or different, has the same gender or not is equal before the eyes of law and will be punished equally for similar crime. It has also been mentioned in article 15 of the Indian Constitution which forbids discrimination on these grounds.

For example, If A belongs to a rich family and has committed theft and the punishment for the same is said to be five months of imprisonment, then B who belongs to a poor family if commits the same offence will be punished for five months only. Unlike what happened to the Ansaris and Omprakash which clearly showed how they were discriminated on the basis of religion and caste.

Democracy is a type of government which is of the people, by the people and for the people offering universal adult franchise. The most essential thing in a democracy is to provide equality among the people so as to help the nation to be fair to all its citizens and avoid discrimination.

According to Rights of Persons with Disabilities Act 2016, persons with disabilities have equal rights and that the government should make possible their full participation in society. The government has to provide free education and integrate children with disabilities into mainstream schools. This law also states that all public spaces including buildings, school etc. should be accessible and provided with ramps.

Look at the photograph and think about the boy who is being carried with the stair. Do you think that the law stated above is being implemented in this regard? What needs to be done to make the building accessible? 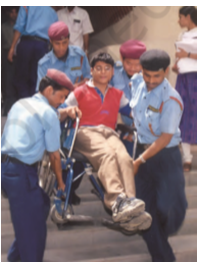 The photograph is of a disabled boy being carried down the stairs. This can be uncomfortable and even dangerous. It shows a clear non-implementation of the Rights of persons with Disabilities Act of 2016 which says that the infrastructure of all public places should be modified and made accessible to the persons with disabilities and enable their full participation in society A ramp should be built to correct this situation. This way, disabled people will be able to move easily and independently.

Universal Adult Franchise: It means that all adults who are 18 or above have the right to vote regardless of their social or economic backgrounds.

Dignity: To be worthy of respect.

Constitution: A document that lays down the basic rules for and the ideals of the people of a country.

Civil Rights Movement: A movement started by the Black Americans in the 1950’s to fight against racial discrimination and for greater equality.

Disabilities: A physical or mental ailment which restricts one’s activities, and movement.

Democracy: A type of government where people rule themselves by taking part in the election process.