NCERT Solutions for Class 7 Civics Chapter 5 – Women Change the World (Social Science), contains solutions to various questions in Exercise for Chapter 5. At the end of the Solutions, all the keywords and Notes which are important to understand Chapter 5 Women Change the World Class 7 Civics, have been explained in a simple and easy to understand manner. We are providing NCERT Solutions for Class 7 all subjects which can be accessed by clicking here. 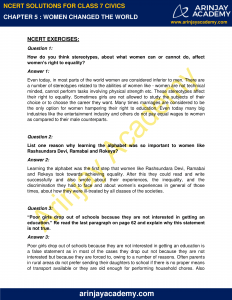 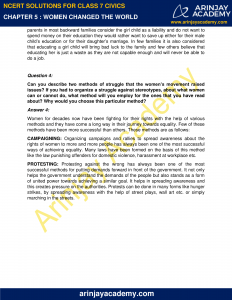 How do you think stereotypes, about what women can or cannot do, affect women’s right to equality?

Even today, in most parts of the world women are considered inferior to men. There are a number of stereotypes related to the abilities of women like – women are not technical minded, cannot perform tasks involving physical strength etc. These stereotypes affect their right to equality. Sometimes girls are not allowed to study the subjects of their choice or to choose the career they want. Many times marriages are considered to be the only option for women hampering their right to education. Even today many big industries like the entertainment industry and others do not pay equal wages to women as compared to their male counterparts.

List one reason why learning the alphabet was so important to women like Rashsundara Devi, Ramabai and Rokeya?

Learning the alphabet was the first step that women like Rashsundara Devi, Ramabai and Rokeya took towards achieving equality. After this they could read and write successfully and also wrote about their experiences, the inequality, and the discrimination they had to face and about women’s experiences in general of those times, about how they were ill-treated by all classes of the societies.

“Poor girls drop out of schools because they are not interested in getting an education.” Re read the last paragraph on page 62 and explain why this statement is not true.

Poor girls drop out of schools because they are not interested in getting an education is a false statement as in most of the cases they drop out not because they are not interested but because they are forced to, owing to a number of reasons. Often parents in rural areas do not prefer sending their daughters to school if there is no proper means of transport available or they are old enough for performing household chores. Also parents in most backward families consider the girl child as a liability and do not want to spend money on their education they would rather want to save up either for their male child’s education or for their daughter’s marriage. In few families it is also considered that educating a girl child will bring bad luck to the family and few others believe that educating her is just a waste as they are not capable enough and will never be able to do a job.

Can you describe two methods of struggle that the women’s movement raised issues? If you had to organize a struggle against stereotypes, about what women can or cannot do, what method will you employ for the ones that you have read about? Why would you choose this particular method?

Women for decades now have been fighting for their rights with the help of various methods and they have come a long way in their journey towards equality. Few of these methods have been more successful than others. These methods are as follows:

CAMPAIGNING: Organizing campaigns and rallies to spread awareness about the rights of women to more and more people has always been one of the most successful ways of achieving equality. Many laws have been formed on the basis of this method like the law punishing offenders for domestic violence, harassment at workplace etc.

PROTESTING: Protesting against the wrong has always been one of the most successful methods for putting demands forward in front of the government. It not only helps the government understand the demands of the people but also stands as a form of united power towards achieving a similar goal. It helps in spreading awareness and this creates pressure on the authorities. Protests can be done in many forms like hunger strikes, by spreading awareness with the help of street plays, wall art etc. or simply marching in the streets.

Stereotype: When the unique identity of a person is overlooked and he or she is categorized into a group based on certain general assumptions and characteristics.

Discrimination: When somebody is not treated with equal dignity because of factors like religion status, caste status etc. then it can be termed as discrimination.

Violation: When some particular act is done not following the prescribed set of rules then it can be termed as an act performed in violation.

Sexual-Harassment: When somebody is forced into any sexual activity against their will then it can be termed as sexual harassment.

Campaign: It is a method of protesting against something that a common set of people disapproves off and wants it to be changed.

Protests: When a number of people having common demands form a group to show their disapproval for a particular action or demand for a particular change then this activity can be termed as protests.