NCERT Solutions for Class 7 Civics Chapter 3 – How the State Government Works (Social Science), contains solutions to various questions in Exercise for Chapter 3.At the end of the Solutions, all the keywords and Notes which are important to understand Chapter 3 How the State Government Works Class 7 Civics, have been explained in a simple and easy to understand manner. We are providing NCERT Solutions for Class 7 all subjects which can be accessed by clicking here. 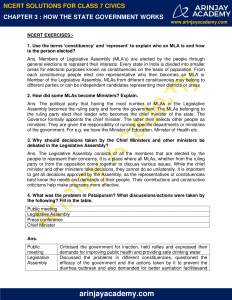 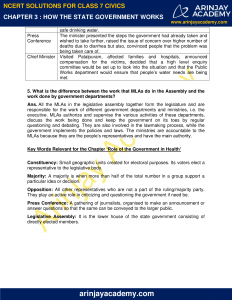 Use the terms ‘constituency’ and ‘represent’ to explain who an MLA is and how is the person elected?

Members of Legislative Assembly (MLA’s) are elected by the people through general elections to represent their interests. Every state in India is divided into smaller areas for electoral purposes known as constituencies on the basis of population. From each constituency people elect one representative who then becomes an MLA or Member of the Legislative Assembly. MLAs from different constituencies may belong to different parties or can be independent candidates representing their districts or areas

How did some MLAs become Ministers? Explain.

The political party that having the most number of MLAs in the Legislative Assembly becomes the ruling party and forms the government. The MLAs belonging to the ruling party elect their leader who becomes the chief minister of the state. The Governor formally appoints the chief minister. The latter then selects other people as ministers. They are given the responsibility of running specific departments or ministries of the government. For e.g. we have the Minister of Education, Minister of Health etc.

Why should decisions taken by the Chief Ministers and other ministers be debated in the Legislative Assembly?

The Legislative Assembly consists of all the members that are elected by the people to represent their concerns. It is a place where all MLAs, whether from the ruling party or from the opposition come together to discuss various issues. While the chief minister and other ministers take decisions, they cannot do so unilaterally. It is important to get all decisions approved by the Assembly, as the representatives of constituencies best know the needs and demands of their people. Their contributions and constructive criticisms help make programs more effective.

What was the problem in Patalpuram? What discussions/actions were taken by the following? Fill in the table. 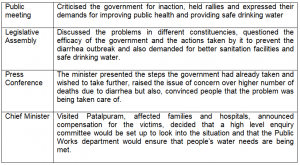 What is the difference between the work that MLAs do in the Assembly and the work done by government departments?

All the MLAs in the legislative assembly together form the legislature and are responsible for the work of different government departments and ministries, i.e. the executive. MLAs authorize and supervise the various activities of these departments, discuss the work being done and keep the government on its toes by regular questioning and debating. They are also involved in the lawmaking process, while the government implements the policies and laws. The ministries are accountable to the MLAs because they are the people’s representatives and have the main authority.

Majority: A majority is when more than half of the total number in a group support a particular idea or decision.

Opposition: All other representatives who are not a part of the ruling/majority party. They play an active role in criticizing and questioning the government if need be.

Press Conference: A gathering of journalists, organised to make an announcement or answer questions so that the same can be conveyed to the larger public.

Legislative Assembly: It is the lower house of the state government consisting of directly elected members.