NCERT Solutions for Class 7 Civics Chapter 4 – Growing up as Boys and Girls (Social Science), contains solutions to various questions in Exercise for Chapter 4.At the end of the Solutions, all the keywords and Notes which are important to understand Chapter 4 Growing up as Boys and Girls Class 7 Civics, have been explained in a simple and easy to understand manner. We are providing NCERT Solutions for Class 7 all subjects which can be accessed by clicking here. 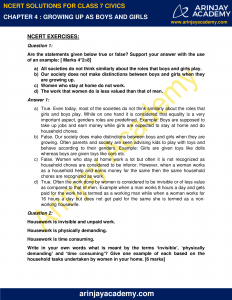 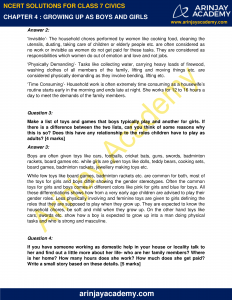 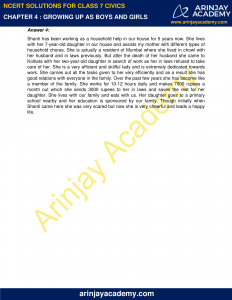 Are the statements given below true or false? Support your answer with the use of an example: [ Marks 4*2=8]

(a)All societies do not think similarly about the roles that boys and girls play.

(b)Our society does not make distinctions between boys and girls when they are growing up.

(c)Women who stay at home do not work.

(d)The work that women do is less valued than that of men.

(a)Even today, most of the societies do not think similarly about the roles that girls and boys play. While on one hand it is considered that equality is a very important aspect, genders roles are predefined. Example: Boys are supposed to take up jobs and earn money while girls are expected to stay at home and do household chores.

(b)Our society does make distinctions between boys and girls when they are growing. Often parents and society are seen advising kids to play with toys and behave according to their genders. Example: Girls are given toys like dolls whereas boys are given toys like cars etc.

Housework is invisible and unpaid work.

Write in your own words what is meant by the terms ‘invisible’, ‘physically demanding’ and ‘time consuming’? Give one example of each based on the household tasks undertaken by women in your home. [6 marks]

‘Invisible’- The household chores performed by women like cooking food, cleaning the utensils, dusting, taking care of children or elderly people etc. are often considered as no work or invisible as women do not get paid for these tasks. They are considered as responsibilities which women do out of emotion and love and not jobs.

‘Time Consuming’- Household work is often extremely time consuming as a housewife’s routine starts early in the morning and ends late at night. She works for 12 to 16 hours a day to meet the demands of the family members.

Make a list of toys and games that boys typically play and another for girls. If there is a difference between the two lists, can you think of some reasons why this is so? Does this have any relationship to the roles children have to play as adults? [4 marks]

While few toys like board games, badminton rackets etc. are common for both, most of the toys for girls and boys differ showing the gender stereotypes. Often the common toys for girls and boys comes in different colors like pink for girls and blue for boys. All these differentiations shows how from a very early age children are advised to play their gender roles. Less physically involving and feminine toys are given to girls defining the roles that they are supposed to play when they grow up. They are expected to know the household chores, be soft and mild when they grow up. On the other hand toys like cars, swords etc. show how a boy is expected to grow up into a man doing physical tasks and who is strong and masculine.

If you have someone working as domestic help in your house or locality talk to her and find out a little more about her life- who are her family members? Where is her home? How many hours does she work? How much does she get paid? Write a small story based on these details. [5 marks]

Shanti has been working as a household help in our house for 5 years now. She lives with her 7-year-old daughter in our house and assists my mother with different types of household chores. She is actually a resident of Mumbai where she lived in chowl with her husband and in laws previously. But after the death of her husband she came to Kolkata with her two-year-old daughter in search of work as her in laws refused to take care of her. She is a very efficient and skillful lady and is extremely dedicated towards work. She carries out all the tasks given to her very efficiently and as a result she has good relations with everyone in the family. Over the past few years she has become like a member of the family. She works for 10-12 hours daily and makes 7000 rupees a month out which she sends 3000 rupees to her in laws and saves the rest for her daughter. She lives with our family and eats with us. Her daughter goes to a primary school nearby and her education is sponsored by our family. Though initially when Shanti came here she was very scared but now she is very cheerful and leads a happy life.

Important Terms Relevant for NCERT Solutions for Class 7 Civics Chapter 4 Growing up as Boys and Girls:

Identity: It is recognition of one’s existence in either a unique manner or in a common manner.

Double-Burden: When the load of work is twice compared to normal scenario’s typically used for modern day working women who have to look after both the household chores as well as their professional jobs.

Care-Giving: The task of nurturing and catering to the requirements of the needful.

De-Valued: When the equal recognition is not giver compared to efforts then it can be termed as de-valued.

House-Help: One who is responsible for all the household chores or is present to help the mistress of the house to perform the chores of the house and gets paid in return.