NCERT Solutions for Class 8 Civics Chapter 7 – Understanding Marginalisation (Social Science), contains solutions to various questions in Exercise for Chapter 7. At the end of the Solutions, all the keywords and Notes which are important to understand Chapter 7 Understanding Marginalisation Class 8 Civics, have been explained in a simple and easy to understand manner. We are providing NCERT Solutions for Class 8 all subjects which can be accessed by clicking here. 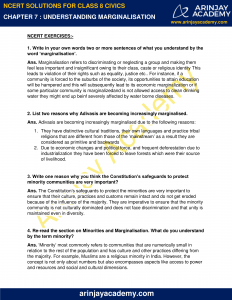 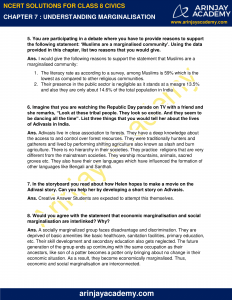 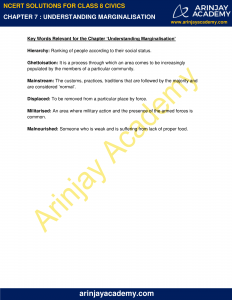 Write in your own words two or more sentences of what you understand by the word ‘marginalisation’.

Marginalisation refers to discriminating or neglecting a group and making them feel less important and insignificant owing to their class, caste or religious identity This leads to violation of their rights such as equality, justice etc.. For instance, if a community is forced to the suburbs of the society, its opportunities to attain education will be hampered and this will subsequently lead to its economic marginalization or if some particular community is marginalized and is not allowed access to clean drinking water they might end up being severely affected by water borne diseases.

Adivasis are becoming increasingly marginalised due to the following reasons:

Write one reason why you think the Constitution’s safeguards to protect minority communities are very important?

The Constitution’s safeguards to protect the minorities are very important to ensure that their culture, practices and customs remain intact and do not get eroded because of the influence of the majority. They are imperative to ensure that the minority community is not culturally dominated and does not face discrimination and that unity is maintained even in diversity.

Re-read the section on Minorities and Marginalisation. What do you understand by the term minority?

‘Minority’ most commonly refers to communities that are numerically small in relation to the rest of the population and has culture and other practices differing from the majority. For example, Muslims are a religious minority in India. However, the concept is not only about numbers but also encompasses aspects like access to power and resources and social and cultural dimensions.

You are participating in a debate where you have to provide reasons to support the following statement: ‘Muslims are a marginalised community’. Using the data provided in this chapter, list two reasons that you would give.

I would give the following reasons to support the statement that Muslims are a marginalised community:

Imagine that you are watching the Republic Day parade on TV with a friend and she remarks, “Look at these tribal people. They look so exotic. And they seem to be dancing all the time”. List three things that you would tell her about the lives of Adivasis in India.

Adivasis live in close association to forests. They have a deep knowledge about the access to and control over forest resources. They were traditionally hunters and gatherers and lived by performing shifting agriculture also known as slash and burn agriculture. There is no hierarchy in their societies. They practice  religions that are very different from the mainstream societies. They worship mountains, animals, sacred groves etc. They also have their own languages which have influenced the formation of other languages like Bengali and Santhali.

In the storyboard you read about how Helen hopes to make a movie on the Adivasi story. Can you help her by developing a short story on Adivasis.

Creative Answer Students are expected to attempt this themselves.

A socially marginalized group faces disadvantage and discrimination. They are deprived of basic amenities like basic healthcare, sanitation facilities, primary education, etc. Their skill development and secondary education also gets neglected. The future generation of the group ends up continuing with the same occupation as their ancestors, like son of a potter becomes a potter only bringing about no change in their economic situation. As a result, they become economically marginalised. Thus, economic and social marginalisation are interconnected.

Hierarchy: Ranking of people according to their social status.

Ghettoisation: It is a process through which an area comes to be increasingly populated by the members of a particular community.

Mainstream: The customs, practices, traditions that are followed by the majority and are considered ‘normal’.

Displaced: To be removed from a particular place by force.

Militarised: An area where military action and the presence of the armed forces is common.

Malnourished: Someone who is weak and is suffering from lack of proper food.