NCERT Solutions for Class 8 Civics Chapter 3 – Why do we need a Parliament?

NCERT Solutions for Class 8 Civics Chapter 3 – Why do we need a Parliament? (Social Science), contains solutions to various questions in Exercise for Chapter 3. At the end of the Solutions, all the keywords and Notes which are important to understand Chapter 3 Why do we need a Parliament? Class 8 Civics, have been explained in a simple and easy to understand manner. We are providing NCERT Solutions for Class 8 all subjects which can be accessed by clicking here.

Download NCERT Solutions for Class 8 Civics Chapter 3 – Why do we need a Parliament?

NCERT Solutions for Class 8 Civics Chapter 3 – Why do we need a Parliament?– Solutions to  Question 3 – Defination of Keywords-Approval, Coalition, Unresolved, Universal adult Franchise and Parliament. 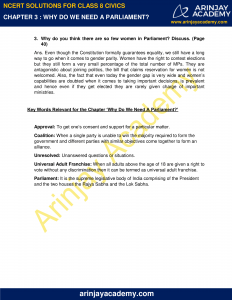 NCERT Solutions for Class 8 Civics Chapter 3 – Why do we need a Parliament? – NCERT Exercises

Why do you think our national movement supported the idea that all adults should have a right to vote?

India’s freedom struggle was fought by people belonging to different castes, religion and socio-economic backgrounds. They were inspired by the ideas of equality, freedom and participation of all in decision-making. The experience of the colonial rule and the participation of different people in the nationalist movement convinced our leaders that all people in independent India should be able to participate in the decision making process. With the onset of independence, we were going to be a free country with a government that would be sensitive to people’s needs. Such dreams and aspirations were made a part of our Constitution that laid down the principle of universal adult franchise which means that all adult citizens of the country above the age of 18 will have the right to vote. Our Constitution makers wanted to make sure that no one is discriminated against and that everyone has an equal part to play in the formation of the government.

OTHER QUESTIONS FROM THE CHAPTER: WHY DO WE NEED A PARLIAMENT?

Do you think there would be any difference if the class monitor was selected by the teacher or elected by the students? Discuss. (Page 32)

If the students got the chance to elect their class monitor, then the monitor so chosen would represent their will and they will be more likely to cooperate with him/her. On the other hand, a teacher may be biased in selecting a class monitor and in this case, students will feel that a class monitor is being imposed upon them. They might not be completely satisfied with the choice of monitor and this may lead to grievances and an unhealthy environment.

Looking at this table, would you say that people’s participation during the past 50 years has decreased/increased/been stable after the initial increase? (Page 39)

People’s participation keeps fluctuating due to a number of reasons.. For instance, the year 1971 saw a decrease in the voter turnout but this picture was changed by the next general election. Then again, there was a decline in 1991-92,S however since 2004, people’s participation has seen a steady increase which is a good sign. It shows that people’s political awareness and interest in their country’s affairs has been increasing. They have started taking their role in the formation of the government seriously along with  check on the activities of their representatives.

Why do you think there are so few women in Parliament? Discuss. (Page 40)

Even though the Constitution formally guarantees equality, we still have a long way to go when it comes to gender parity. Women have the right to contest elections but they still form a very small percentage of the total number of MPs. They are antagonistic about joining politics, the bill that claims reservation for women is not welcomed. Also, the fact that even today the gender gap is very wide and women’s capabilities are doubted when it comes to taking important decisions, is prevalent and hence even if they get elected they are rarely given charge of important ministries.

Topics Covered in Why do we need a Parliament? Chapter 3 Civics (Social Science)

Important Terms Relevant for NCERT Solutions for Class 8 Civics Chapter 3 – Why do we need a Parliament? :

Approval: To get one’s consent and support for a particular matter.

Coalition: When a single party is unable to win the majority required to form the government and different parties with similar objectives come together to form an alliance.

Universal Adult Franchise: When all adults above the age of 18 are given a right to vote without any discrimination then it can be termed as universal adult franchise.

Parliament: It is the supreme legislative body of India comprising of the President and the two houses the Rajya Sabha and the Lok Sabha.