NCERT Solutions for Class 8 Civics Chapter 4 – Understanding Laws (Social Science), contains solutions to various questions in Exercise for Chapter 4. At the end of the Solutions, all the keywords and Notes which are important to understand Chapter 4 Understanding Laws Class 8 Civics, have been explained in a simple and easy to understand manner. We are providing NCERT Solutions for Class 8 all subjects which can be accessed by clicking here. 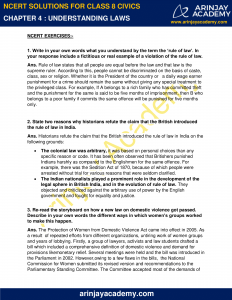 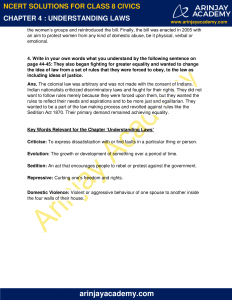 Write in your own words what you understand by the term the ‘rule of law’. In your response include a fictitious or real example of a violation of the rule of law.

Rule of law states that all people are equal before the law and that law is the supreme ruler. According to this, people cannot be discriminated on the basis of caste, class, sex or religion. Whether it is the President of the country or   a daily wage earner punishment for a crime should remain the same without giving any special treatment to the privileged class. For example, If A belongs to a rich family who has committed theft and the punishment for the same is said to be five months of imprisonment, then B who belongs to a poor family if commits the same offence will be punished for five months only.

State two reasons why historians refute the claim that the British introduced the rule of law in India.

Historians refute the claim that the British introduced the rule of law in India on the following grounds:

Re-read the storyboard on how a new law on domestic violence got passed. Describe in your own words the different ways in which women’s groups worked to make this happen.

The Protection of Women from Domestic Violence Act came into effect in 2005. As a result  of repeated efforts from different organizations, untiring work of women groups and years of lobbying. Firstly, a group of lawyers, activists and law students drafted a bill which included a comprehensive definition of domestic violence and demand for provisions like monetary relief. Several meetings were held and the bill was introduced in the Parliament in 2002. However,owing to a few flaws in the bills,  the National Commission for Women submitted its revised version and recommendations to the Parliamentary Standing Committee. The Committee accepted most of the demands of the women’s groups and reintroduced the bill. Finally, the bill was enacted in 2005 with an aim to protect women from any kind of domestic abuse, be it physical, verbal or emotional.

Write in your own words what you understand by the following sentence on page 44-45: They also began fighting for greater equality and wanted to change the idea of law from a set of rules that they were forced to obey, to the law as including ideas of justice.

The colonial law was arbitrary and was not made with the consent of Indians. Indian nationalists criticized discriminatory laws and fought for their rights. They did not want to follow rules merely because they were forced upon them, but they wanted the rules to reflect their needs and aspirations and to be more just and egalitarian. They wanted to be a part of the law making process and revolted against rules like the Sedition Act 1870. Their primary demand remained achieving equality.

Criticise: To express dissatisfaction with or find faults in a particular thing or person.

Evolution: The growth or development of something over a period of time.

Sedition: An act that encourages people to rebel or protest against the government.

Domestic Violence: Violent or aggressive behaviour of one spouse to another inside the four walls of their house.