NCERT Solutions for Class 8 Civics Chapter 10 – Law and Social Justice (Social Science), contains solutions to various questions in Exercise for Chapter 10. At the end of the Solutions, all the keywords and Notes which are important to understand Chapter 10 Law and Social Justice Class 8 Civics, have been explained in a simple and easy to understand manner. We are providing NCERT Solutions for Class 8 all subjects which can be accessed by clicking here. 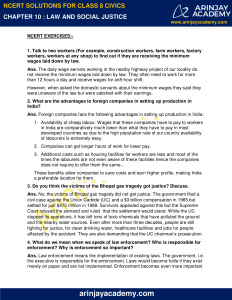 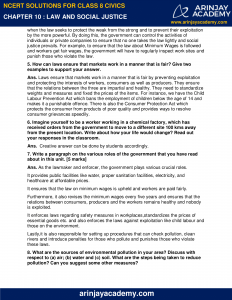 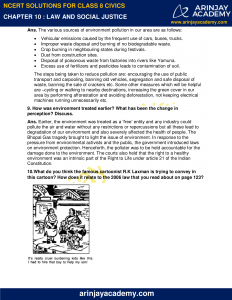 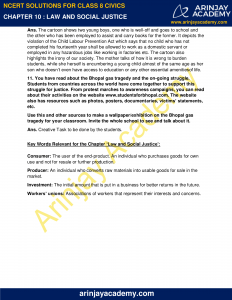 Talk to two workers (For example, construction workers, farm workers, factory workers, workers at any shop) to find out if they are receiving the minimum wages laid down by law.

The daily wage earners working in the nearby highway project of our locality do not receive the minimum wages laid down by law. They often need to work for more than 12 hours a day and receive wages for an8-hour shift.

However, when asked the domestic servants about the minimum wages they said they were unaware of the law but were satisfied with their earnings.

What are the advantages to foreign companies in setting up production in India?

Foreign companies face the following advantages in setting up production in India:

These benefits allow companies to save costs and earn higher profits, making India a preferable location for them.

Do you think the victims of the Bhopal gas tragedy got justice? Discuss.

No, the victims of Bhopal gas tragedy did not get justice. The government filed a civil case against the Union Carbide (UC) and a $3 billion compensation in 1985 but settled for just $470 million in 1989. Survivors appealed against this but the Supreme Court refused the semand and ruled  that the settlement would stand. While the UC stopped its operations, it has left tons of toxic chemicals that have polluted the ground and the nearby water sources. Even after more than three decades, people are still fighting for justice, for clean drinking water, healthcare facilities and jobs for people affected by the accident. They are also demanding that the UC chairman’s prosecution.

Law enforcement means the implementation of existing laws. The government, i.e. the executive is responsible for the enforcement. Laws would become futile if they exist merely on paper and are not implemented. Enforcement becomes even more important when the law seeks to protect the weak from the strong and to prevent their exploitation by the more powerful. By doing this, the government can control the activities of individuals or private companies to ensure that no one takes the law lightly and social justice prevails. For example, to ensure that the law about Minimum Wages is followed and workers get fair wages, the government will have to regularly inspect work sites and punish those who violate the law.

How can laws ensure that markets work in a manner that is fair? Give two examples to support your answer.

Laws ensure that markets work in a manner that is fair by preventing exploitation and protecting the interests of workers, consumers as well as producers. They ensure that the relations between the three are impartial and healthy. They need to standardize weights and measures and fixed the prices of the items. For instance, we have the Child Labour Prevention Act which bans the employment of children below the age of 14 and makes it a punishable offence. There is also the Consumer Protection Act which protects the consumer from products of poor quality and provides ways to resolve consumer grievances speedily.

Imagine yourself to be a worker working in a chemical factory, which has received orders from the government to move to a different site 100 kms away from the present location. Write about how your life would change? Read out your responses in the classroom.

Creative answer can be done by students accordingly.

Write a paragraph on the various roles of the government that you have read about in this unit. [5 marks]

As the lawmaker and enforcer, the government plays various crucial roles.

It ensures that the law on minimum wages is upheld and workers are paid fairly.

Furthermore, it also revises the minimum wages every five years and ensures that the relations between consumers, producers and the workers remains healthy and nobody is exploited.

It enforces laws regarding safety measures in workplaces,standardizes the prices of essential goods etc. and also enforces the laws against exploitation like child labour and those on the environment.

Lastly,it is also responsible for setting up procedures that can check pollution, clean rivers and introduce penalties for those who pollute and punishes those who violate these laws.

What are the sources of environmental pollution in your area? Discuss with respect to (a) air; (b) water and (c) soil. What are the steps being taken to reduce pollution? Can you suggest some other measures?

The various sources of environment pollution in our area are as follows:

The steps being taken to reduce pollution are: encouraging the use of public transport and carpooling, banning old vehicles, segregation and safe disposal of waste, banning the sale of crackers etc. Some other measures which will be helpful are –cycling or walking to nearby destinations, increasing the green cover in our area by performing afforestation and avoiding deforestation, not keeping electrical machines running unnecessarily etc.

How was environment treated earlier? What has been the change in perception? Discuss.

Earlier, the environment was treated as a ‘free’ entity and any industry could pollute the air and water without any restrictions or repercussions but all these lead to degradation of our environment and also severely affected the health of people. The Bhopal Gas tragedy brought to light the issue of environment. In response to the pressure from environmental activists and the public, the government introduced laws on environment protection. Henceforth, the polluter was to be held accountable for the damage done to the environment. The courts also held that the right to a healthy environment was an intrinsic part of the Right to Life under article 21 of the Indian Constitution.

What do you think the famous cartoonist R.K Laxman is trying to convey in this cartoon? How does it relate to the 2006 law that you read about on page 123? 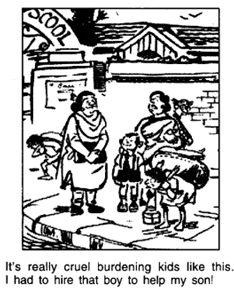 The cartoon shows two young boys, one who is well-off and goes to school and the other who has been employed to assist and carry books for the former. It depicts the violation of the Child Labour Prevention Act which says that no child who has not completed his fourteenth year shall be allowed to work as a domestic servant or employed in any hazardous jobs like working in factories etc. The cartoon also highlights the irony of our society. The mother talks of how it is wrong to burden students, while she herself is encumbering a young child almost of the same age as her son who doesn’t even have access to education or any other essential amenitiesof life.

You have read about the Bhopal gas tragedy and the on-going struggle. Students from countries across the world have come together to support this struggle for justice. From protest marches to awareness campaigns, you can read about their activities on the website www.studentsforbhopal.com. The website also has resources such as photos, posters, documentaries, victims’ statements, etc.

Use this and other sources to make a wallpaper/exhibition on the Bhopal gas tragedy for your classroom. Invite the whole school to see and talk about it.

Creative Task to be done by the students.

Consumer: The user of the end-product. An individual who purchases goods for own use and not for resale or further production.

Producer: An individual who converts raw materials into usable goods for sale in the market.

Investment: The initial amount that is put in a business for better returns in the future.

Workers’ unions: Associations of workers that represent their interests and concerns.