NCERT Solutions for Class 8 Civics Chapter 1 – The Indian Constitution (Social Science), contains solutions to various questions in Exercise for Chapter 1. At the end of the Solutions, all the keywords and Notes which are important to understand Chapter 1 The Indian Constitution Class 8 Civics, have been explained in a simple and easy to understand manner. We are providing NCERT Solutions for Class 8 all subjects which can be accessed by clicking here. 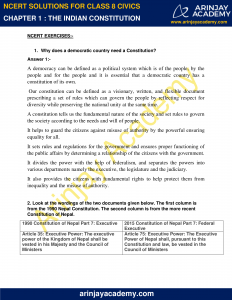 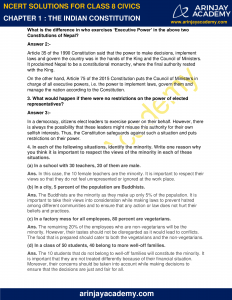 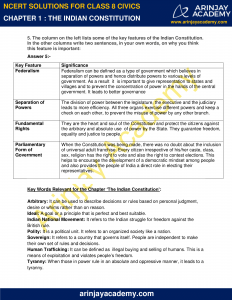 Why does a democratic country need a Constitution?

A democracy can be defined as a political system which is of the people, by the people and for the people and it is essential that a democratic country has a constitution of its own.

Our constitution can be defined as a visionary, written, and flexible document prescribing a set of rules which can govern the people by reflecting respect for diversity while preserving the national unity at the same time.

A constitution tells us the fundamental nature of the society and set rules to govern the society according to the needs and will of people.

It helps to guard the citizens against misuse of authority by the powerful ensuring equality for all.

It sets rules and regulations for the government and ensures proper functioning of the public affairs by determining a relationship of the citizens with the government.

It divides the power with the help of federalism, and separates the powers into various departments namely the executive, the legislature and the judiciary.

It also provides the citizens with fundamental rights to help protect them from inequality and the misuse of authority.

What is the difference in who exercises ‘Executive Power’ in the above two Constitutions of Nepal?

Article 35 of the 1990 Constitution said that the power to make decisions, implement laws and govern the country was in the hands of the King and the Council of Ministers. It proclaimed Nepal to be a constitutional monarchy, where the final authority rested with the King.

On the other hand, Article 75 of the 2015 Constitution puts the Council of Ministers in charge of all executive powers, i.e. the power to implement laws, govern them and manage the nation according to the Constitution.

What would happen if there were no restrictions on the power of elected representatives?

In a democracy, citizens elect leaders to exercise power on their behalf. However, there is always the possibility that these leaders might misuse this authority for their own selfish interests. Thus, the Constitution safeguards against such a situation and puts restrictions on their power.

(b) In a city, 5 percent of the population are Buddhists.

(c) In a factory mess for all employees, 80 percent are vegetarians.

(a)In this case, the 10 female teachers are the minority. It is important to respect their views so that they do not feel unrepresented or ignored at the work place.

(b)The Buddhists are the minority as they make up only 5% of the population. It is important to take their views into consideration while making laws to prevent hatred among different communities and to ensure that any action or law does not hurt their beliefs and practices.

(c)The remaining 20% of the employees who are non-vegetarians will be the minority. However, their tastes should not be disregarded as it would lead to conflicts. The food that is prepared should cater to both the vegetarians and the non-vegetarians.

(d)The 10 students that do not belong to well-off families will constitute the minority. It is important that they are not treated differently because of their financial situation. Moreover, their concerns should be taken into account while making decisions to ensure that the decisions are just and fair for all.

The column on the left lists some of the key features of the Indian Constitution. In the other columns write two sentences, in your own words, on why you think this feature is important: 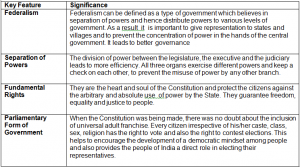 Arbitrary: It can be used to describe decisions or rules based on personal judgment, desire or whims rather than on reason.

Ideal: A goal or a principle that is perfect and best suitable.

Indian National Movement: It refers to the Indian struggle for freedom against the British rule.

Polity: It is a political unit. It refers to an organized society like a nation.

Sovereign: It refers to a country that governs itself. People are independent to make their own set of rules and decisions.

Human Trafficking: It can be defined as  illegal buying and selling of humans. This is a means of exploitation and violates people’s freedom.

Tyranny: When those in power rule in an absolute and oppressive manner, it leads to a tyranny.