NCERT Solutions for Class 8 Civics Chapter 2 – Understanding Secularism (Social Science), contains solutions to various questions in Exercise for Chapter 2. At the end of the Solutions, all the keywords and Notes which are important to understand Chapter 2 Understanding Secularism Class 8 Civics, have been explained in a simple and easy to understand manner. We are providing NCERT Solutions for Class 8 all subjects which can be accessed by clicking here. 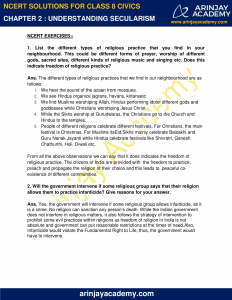 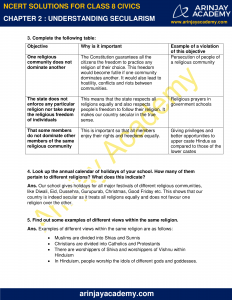 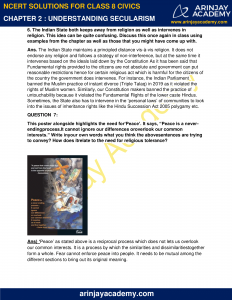 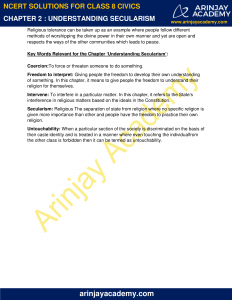 The different types of religious practices that we find in our neighbourhood are as follows:

From all the above observations we can say that it does indicates the freedom of religious practice. The citizens of India are provided with  the freedom to practice, preach and propagate the religion of their choice and this leads to  peaceful co-existence of different communities.

Will the government intervene if some religious group says that their religion allows them to practice infanticide? Give reasons for your answer.

Yes, the government will intervene if some religious group allows infanticide, as it is a crime. No religion can sanction any person’s death. While the Indian government does not interfere in religious matters, it also follows the strategy of intervention to prohibit some evil practices within religions as freedom of religion in India is not absolute and government can put reasonable restrictions at the times of need.Also, Infanticide would violate the Fundamental Right to Life, thus, the government would have to intervene. 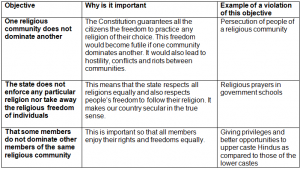 Look up the annual calendar of holidays of your school. How many of them pertain to different religions? What does this indicate?

Our school gives holidays for all major festivals of different religious communities, like Diwali, Eid, Dussehra, Gurupurab, Christmas, Good Friday etc. This shows that our country is indeed secular as it treats all religions equally and does not favour one religion over the other.

Find out some examples of different views within the same religion.

Examples of different views within the same religion are as follows:

The Indian State both keeps away from religion as well as intervenes in religion. This idea can be quite confusing. Discuss this once again in class using examples from the chapter as well as those that you might have come up with.

The Indian State maintains a principled distance vis-à-vis religion. It does not endorse any religion and follows a strategy of non-interference, but at the same time it intervenes based on the ideals laid down by the Constitution As it has been said that Fundamental rights provided to the citizens are not absolute and government can put reasonable restrictions hence for certain religious act which is harmful for the citizens of the country the government does intervenes. For instance, the Indian Parliament banned the Muslim practice of instant divorce (Triple Talaq) in 2019 as it violated the rights of Muslim women. Similarly, our Constitution makers banned the practice of untouchability because it violated the Fundamental Rights of the lower caste Hindus. Sometimes, the State also has to intervene in the ‘personal laws’ of communities to look into the issues of inheritance rights like the Hindu Succession Act 2005 polygamy etc.

This poster alongside highlights the need for‘Peace’. It says, “Peace is a never-endingprocess.It cannot ignore our differences or overlook our common interests.” Write in your own words what you think the above sentences are trying to convey? How does it relate to the need for religious tolerance? 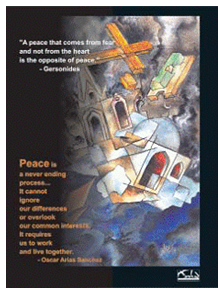 ‘Peace’ as stated above is a reciprocal process which does not lets us overlook our common interests. It is a process by which the similarities and dissimilarities together form a whole. Fear cannot enforce peace into people. It needs to be mutual among the different sections to bring out its original meaning.

Religious tolerance can be taken up as an example where people follow different methods of worshipping the divine power in their own manner and yet are open and respects the ways of the other communities which leads to peace.

Coercion:To force or threaten someone to do something.

Intervene: To interfere in a particular matter. In this chapter, it refers to the State’s interference in religious matters based on the ideals in the Constitution.

Secularism: Religious The separation of state from religion where no specific religion is given more importance than other and people have the freedom to practice their own religion.

Untouchability: When a particular section of the society is discriminated on the basis of their caste identity and is treated in a manner where even touching the individual from the other class is forbidden then it can be termed as untouchability.