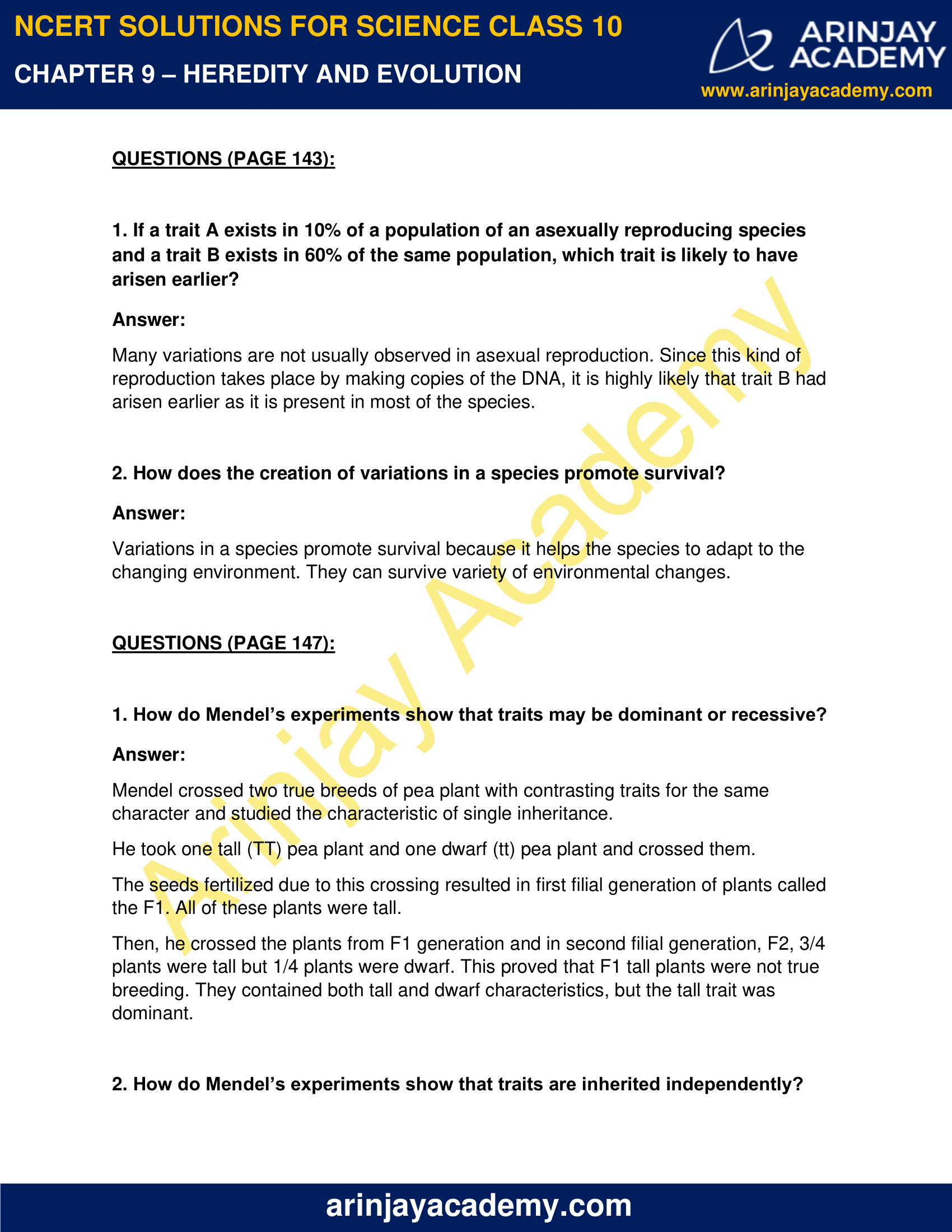 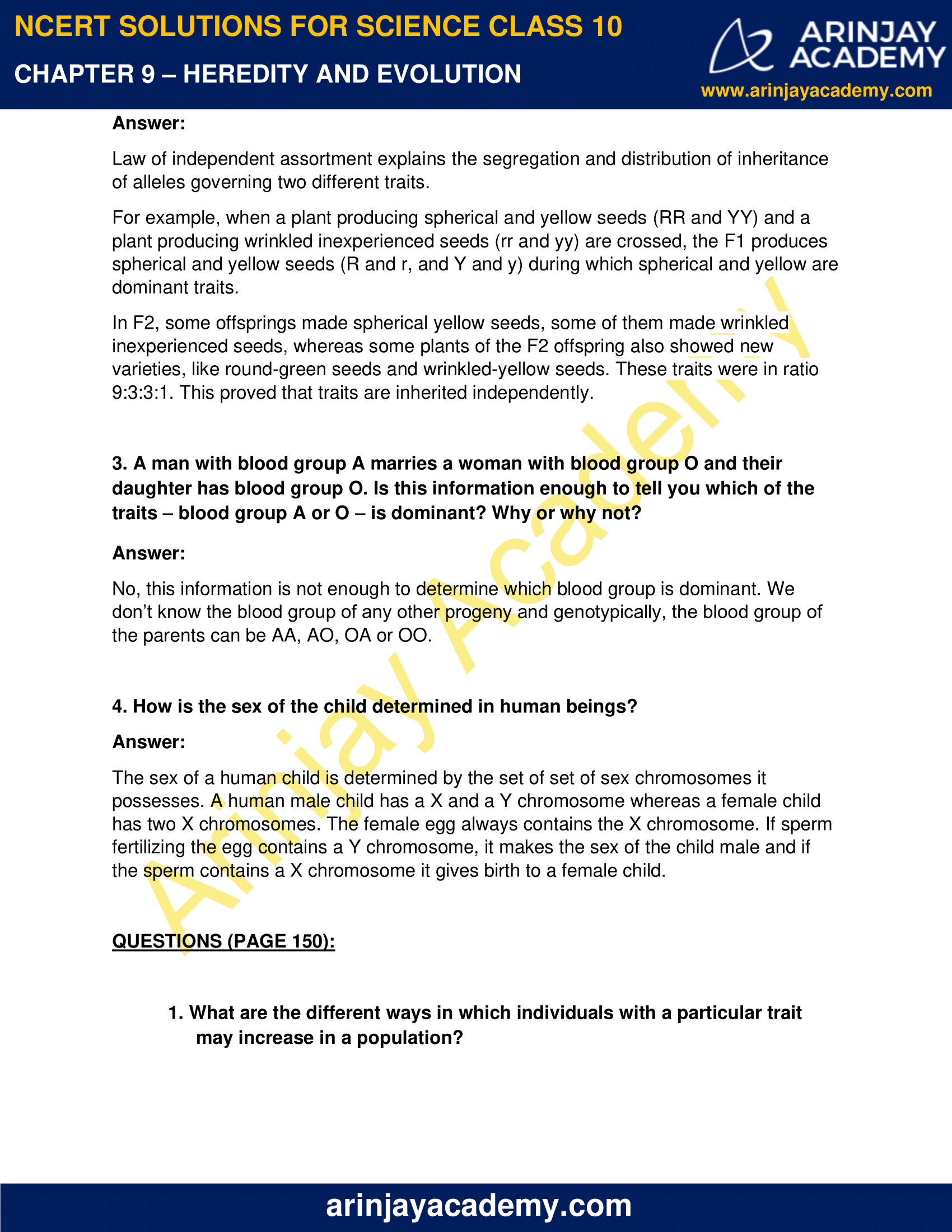 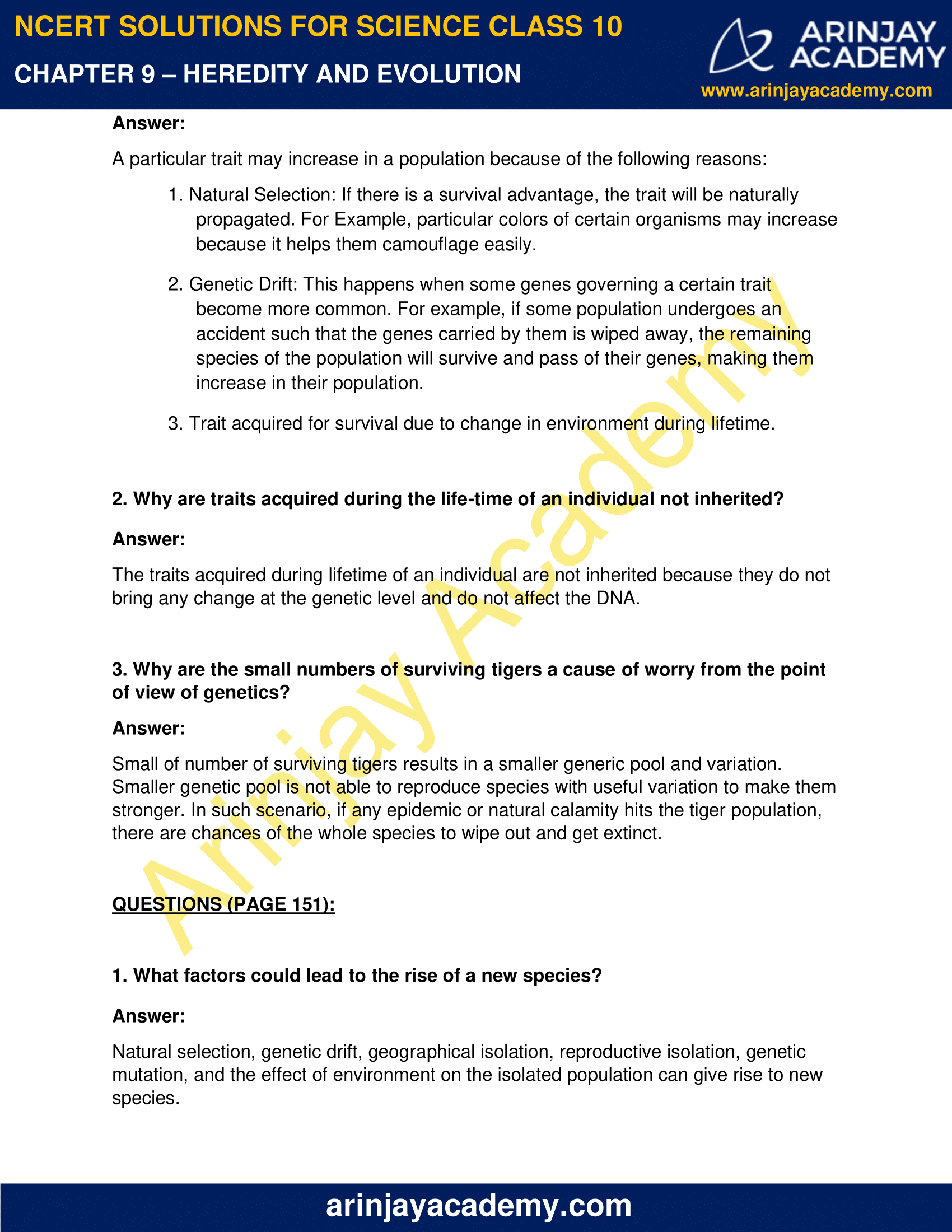 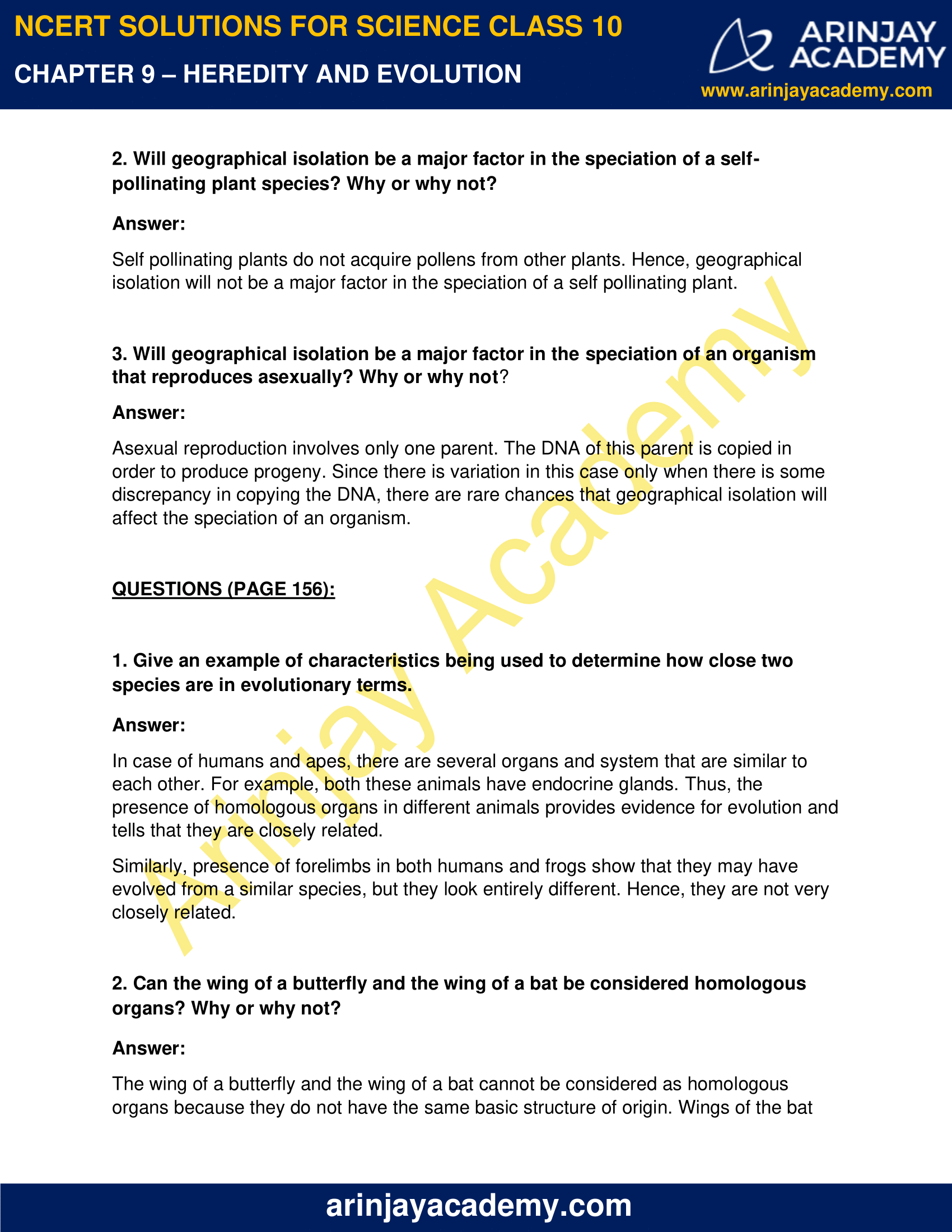 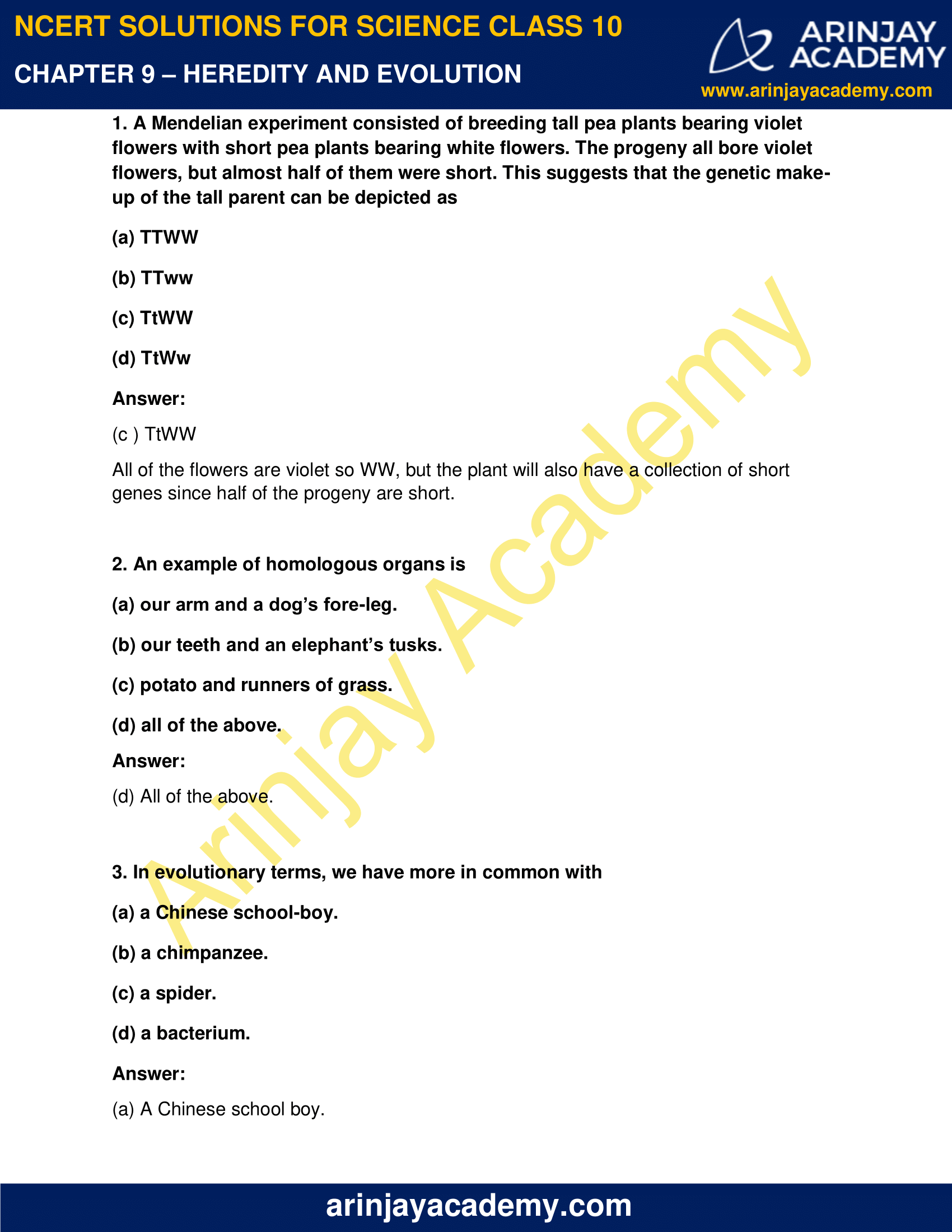 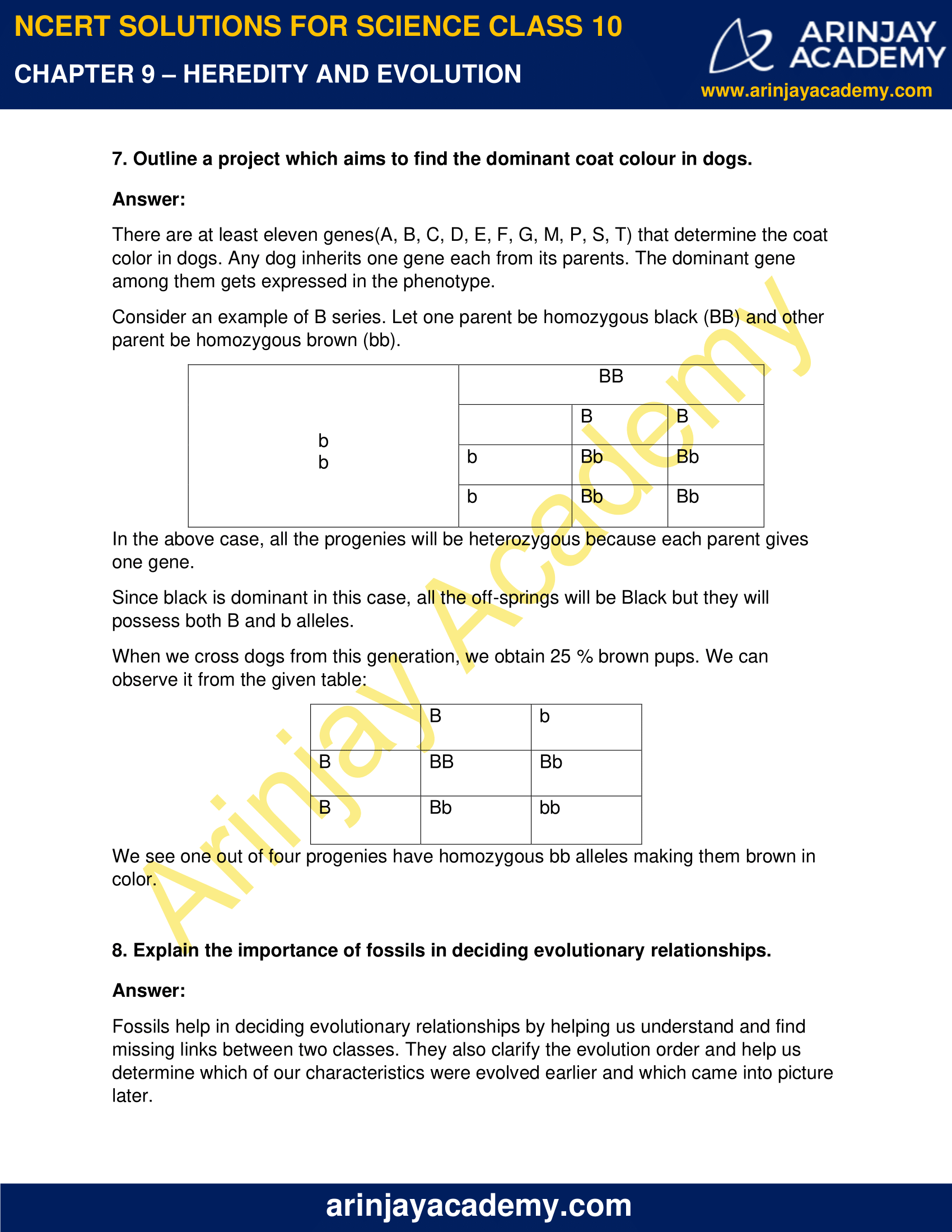 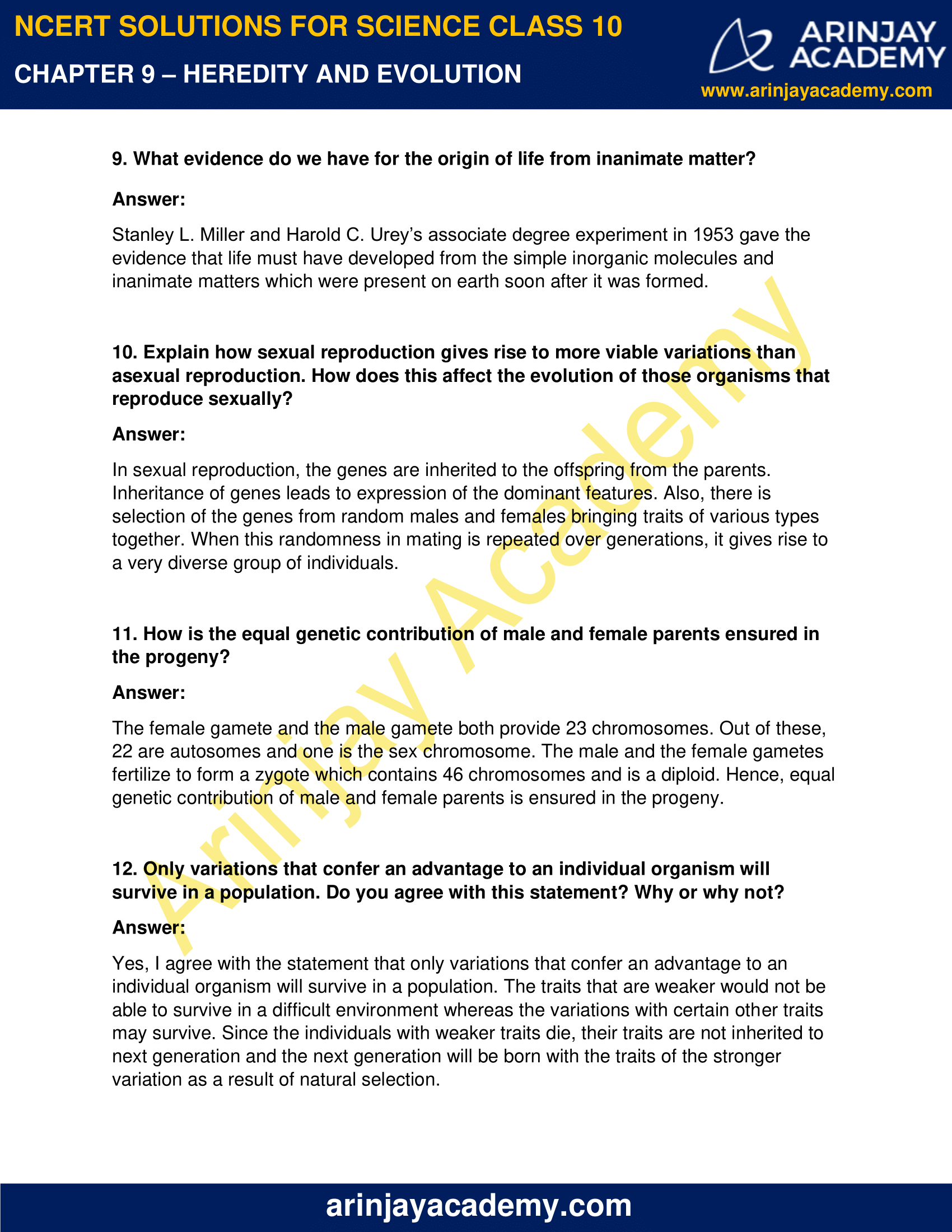 1. If a trait A exists in 10% of a population of an asexually reproducing species and a trait B exists in 60% of the same population, which trait is likely to have arisen earlier?

Many variations are not usually observed in asexual reproduction. Since this kind of reproduction takes place by making copies of the DNA, it is highly likely that trait B had arisen earlier as it is present in most of the species.

2. How does the creation of variations in a species promote survival?

Variations in a species promote survival because it helps the species to adapt to the changing environment. They can survive variety of environmental changes.

1. How do Mendel’s experiments show that traits may be dominant or recessive?

Mendel crossed two true breeds of pea plant with contrasting traits for the same character and studied the characteristic of single inheritance.

The seeds fertilized due to this crossing resulted in first filial generation of plants called the F1. All of these plants were tall.

Then, he crossed the plants from F1 generation and in second filial generation, F2, 3/4 plants were tall but 1/4 plants were dwarf. This proved that F1 tall plants were not true breeding. They contained both tall and dwarf characteristics, but the tall trait was dominant.

2. How do Mendel’s experiments show that traits are inherited independently?

In F2, some offsprings made spherical yellow seeds, some of them made wrinkled inexperienced seeds, whereas some plants of the F2 offspring also showed new varieties, like round-green seeds and wrinkled-yellow seeds. These traits were in ratio 9:3:3:1. This proved that traits are inherited independently.

4. How is the sex of the child determined in human beings?

1. What are the different ways in which individuals with a particular trait may increase in a population?

A particular trait may increase in a population because of the following reasons:

2. Why are traits acquired during the life-time of an individual not inherited?

The traits acquired during lifetime of an individual are not inherited because they do not bring any change at the genetic level and do not affect the DNA.

3. Why are the small numbers of surviving tigers a cause of worry from the point of view of genetics?

Small of number of surviving tigers results in a smaller generic pool and variation. Smaller genetic pool is not able to reproduce species with useful variation to make them stronger. In such scenario, if any epidemic or natural calamity hits the tiger population, there are chances of the whole species to wipe out and get extinct.

1. What factors could lead to the rise of a new species?

Natural selection, genetic drift, geographical isolation, reproductive isolation, genetic mutation, and the effect of environment on the isolated population can give rise to new species.

2. Will geographical isolation be a major factor in the speciation of a self-pollinating plant species? Why or why not?

3. Will geographical isolation be a major factor in the speciation of an organism that reproduces asexually? Why or why not?

Asexual reproduction involves only one parent. The DNA of this parent is copied in order to produce progeny. Since there is variation in this case only when there is some discrepancy in copying the DNA, there are rare chances that geographical isolation will affect the speciation of an organism.

1. Give an example of characteristics being used to determine how close two species are in evolutionary terms.

In case of humans and apes, there are several organs and system that are similar to each other. For example, both these animals have endocrine glands. Thus, the presence of homologous organs in different animals provides evidence for evolution and tells that they are closely related.

Similarly, presence of forelimbs in both humans and frogs show that they may have evolved from a similar species, but they look entirely different. Hence, they are not very closely related.

The wing of a butterfly and the wing of a bat cannot be considered as homologous organs because they do not have the same basic structure of origin. Wings of the bat are made of a bony skeleton, where as that of the butterfly are composed of a polysaccharide membrane. However, they can be referred to as analogous because they perform similar function.

3. What are fossils? What do they tell us about the process of evolution?

The preserved remains of animals, plants, and other organisms that were present in the past are called fossils. They give insights about the lives of ancestors of the plants and animals present today. They give  some evidence of the process of evolution, give information about various extinct species and help us trace back the history of organisms.

1. Why are human beings who look so different from each other in terms of size, colour and looks said to belong to the same species?

Humans who look so different from each other in terms of size, colour, and looks belong to the same species because they share the same basic genetic structure. The variations in humans are generally the result of the areas and cultures they are born in. However, any two humans from any part of the world can mate to produce a fertile human offspring.

2. In evolutionary terms, can we say which among bacteria, spiders, fish and chimpanzees have a ‘better’ body design? Why or why not?

All of the flowers are violet so WW, but the plant will also have a collection of short genes since half of the progeny are short.

2. An example of homologous organs is

a) our arm and a dog’s fore-leg.
b) our teeth and an elephant’s tusks.
c) potato and runners of grass.
d) all of the above.

d) All of the above.

3. In evolutionary terms, we have more in common with

a) a Chinese school-boy.
b) a chimpanzee.
c) a spider.
d) a bacterium.

a) A Chinese school boy.

Both belong to the species Homo sapiens.

A knowledge of minimum three generations is required for considering an attribute as recessive or dominant.

Let the children with light colored eyes have either of the LL or Ll or ll genotype.

Similarly, if children have ll genotype, both the parents could have light colored eyes.

In conclusion, the genes may be homozygous for the attribute resulting in presence of same trait in youngsters.

On this basis, we cannot really determine whether the light eye color is dominant or recessive.

5. How are the areas of study – evolution and classification – interlinked?

Classification is done on the basis of similar characteristics. The more similar they are, the more closely they are related. By doing biological classification, we obtain the evolutionary relationship between different species. If two species are more closely related, it implies that they have more recent common ancestor.

6. Explain the terms analogous and homologous organs with examples.

Analogous organs are those organs that do not similar basic structural style and origin but have similar functions. For example: The wings of a bat and a butterfly.

7. Outline a project which aims to find the dominant coat colour in dogs.

There are at least eleven genes(A, B, C, D, E, F, G, M, P, S, T) that determine the coat color in dogs. Any dog inherits one gene each from its parents. The dominant gene among them gets expressed in the phenotype.

In the above case, all the progenies will be heterozygous because each parent gives one gene.

Since black is dominant in this case, all the off-springs will be Black but they will possess both B and b alleles.

When we cross dogs from this generation, we obtain 25 % brown pups. We can observe it from the given table:

8. Explain the importance of fossils in deciding evolutionary relationships.We see one out of four progenies have homozygous bb alleles making them brown in color.

Fossils help in deciding evolutionary relationships by helping us understand and find missing links between two classes. They also clarify the evolution order and help us determine which of our characteristics were evolved earlier and which came into picture later.

9. What evidence do we have for the origin of life from inanimate matter?

Stanley L. Miller and Harold C. Urey’s associate degree experiment in 1953 gave the evidence that life must have developed from the simple inorganic molecules and inanimate matters which were present on earth soon after it was formed.

In sexual reproduction, the genes are inherited to the offspring from the parents. Inheritance of genes leads to expression of the dominant features. Also, there is selection of the genes from random males and females bringing traits of various types together. When this randomness in mating is repeated over generations, it gives rise to a very diverse group of individuals.

11. How is the equal genetic contribution of male and female parents ensured in the progeny?

12. Only variations that confer an advantage to an individual organism will survive in a population. Do you agree with this statement? Why or why not?

Yes, I agree with the statement that only variations that confer an advantage to an individual organism will survive in a population. The traits that are weaker would not be able to survive in a difficult environment whereas the variations with certain other traits may survive. Since the individuals with weaker traits die, their traits are not inherited to next generation and the next generation will be born with the traits of the stronger variation as a result of natural selection.