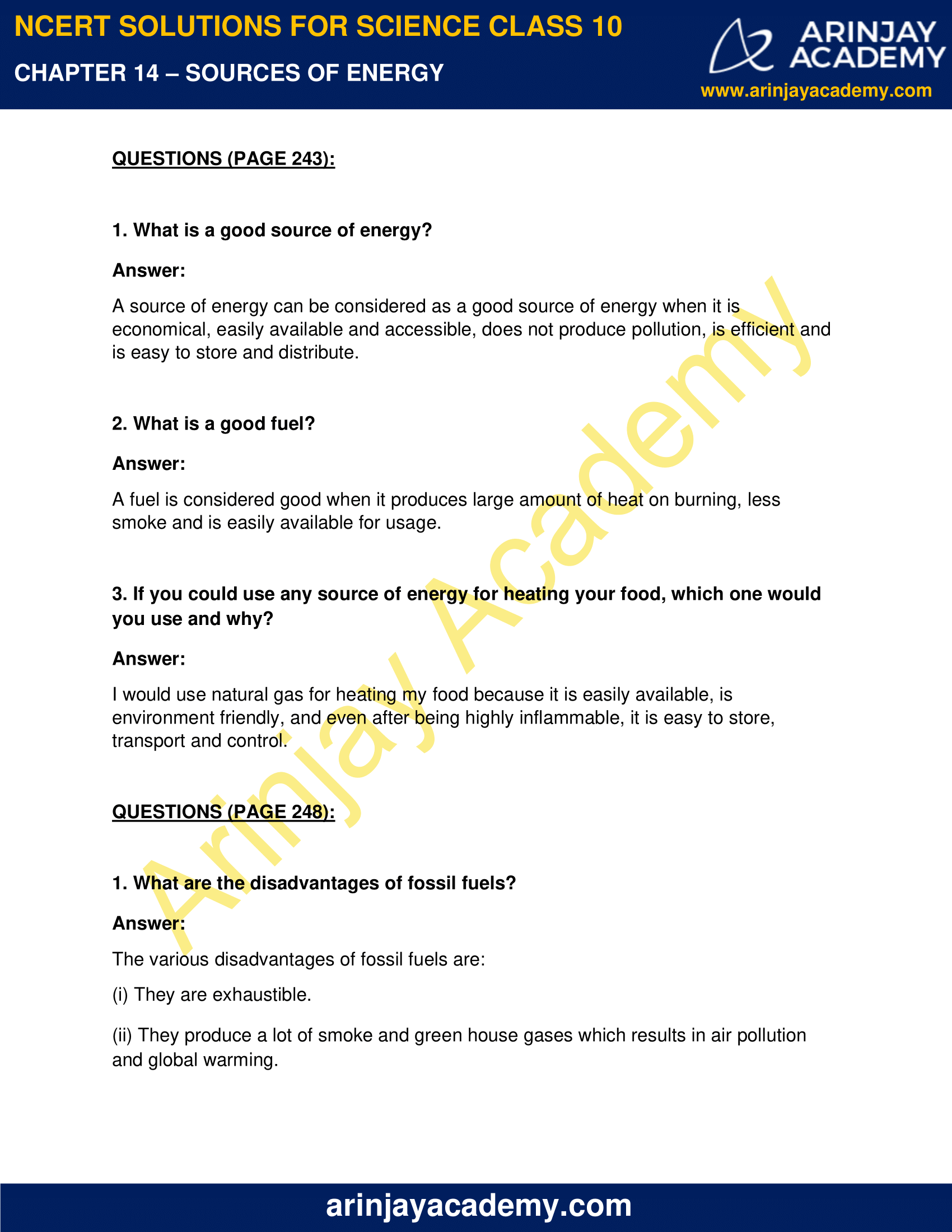 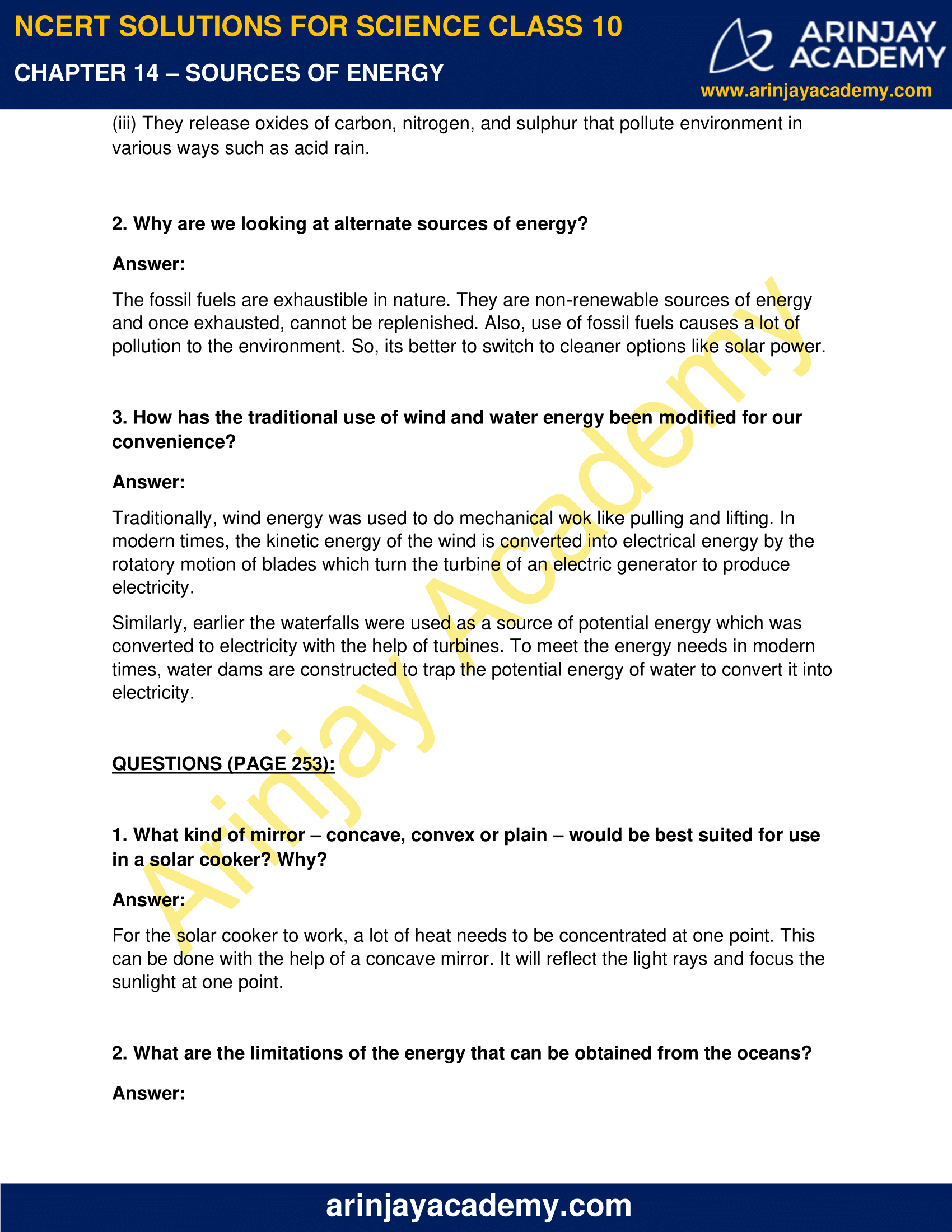 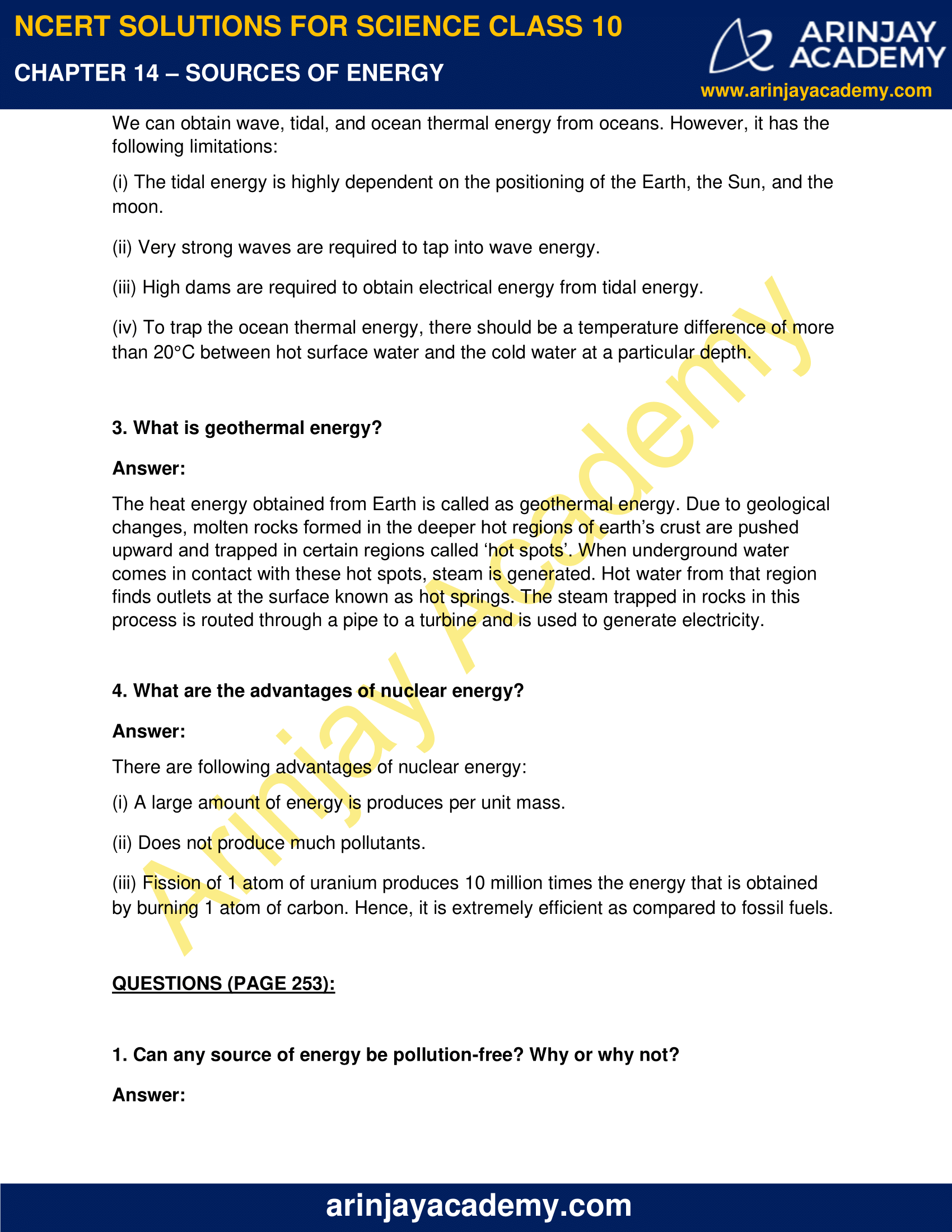 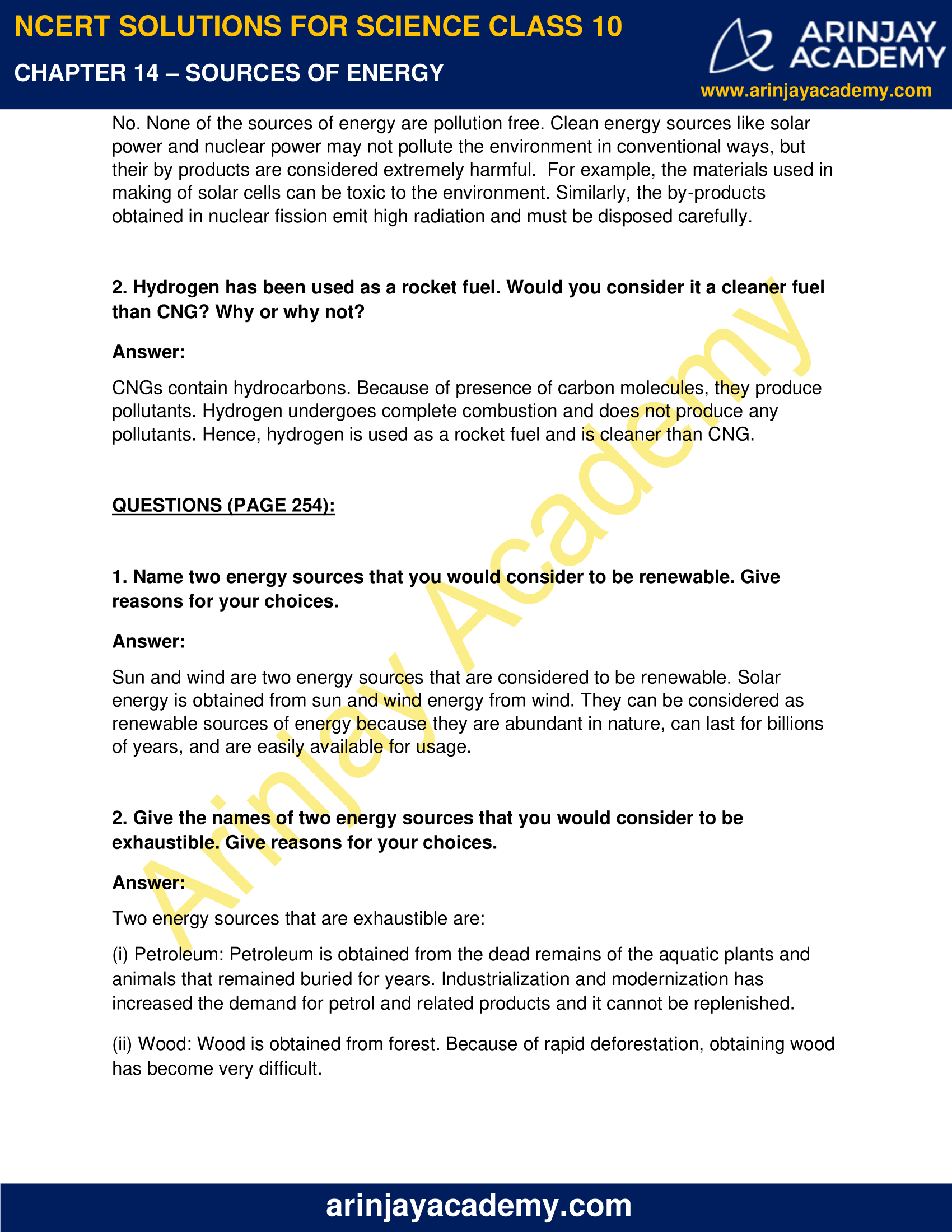 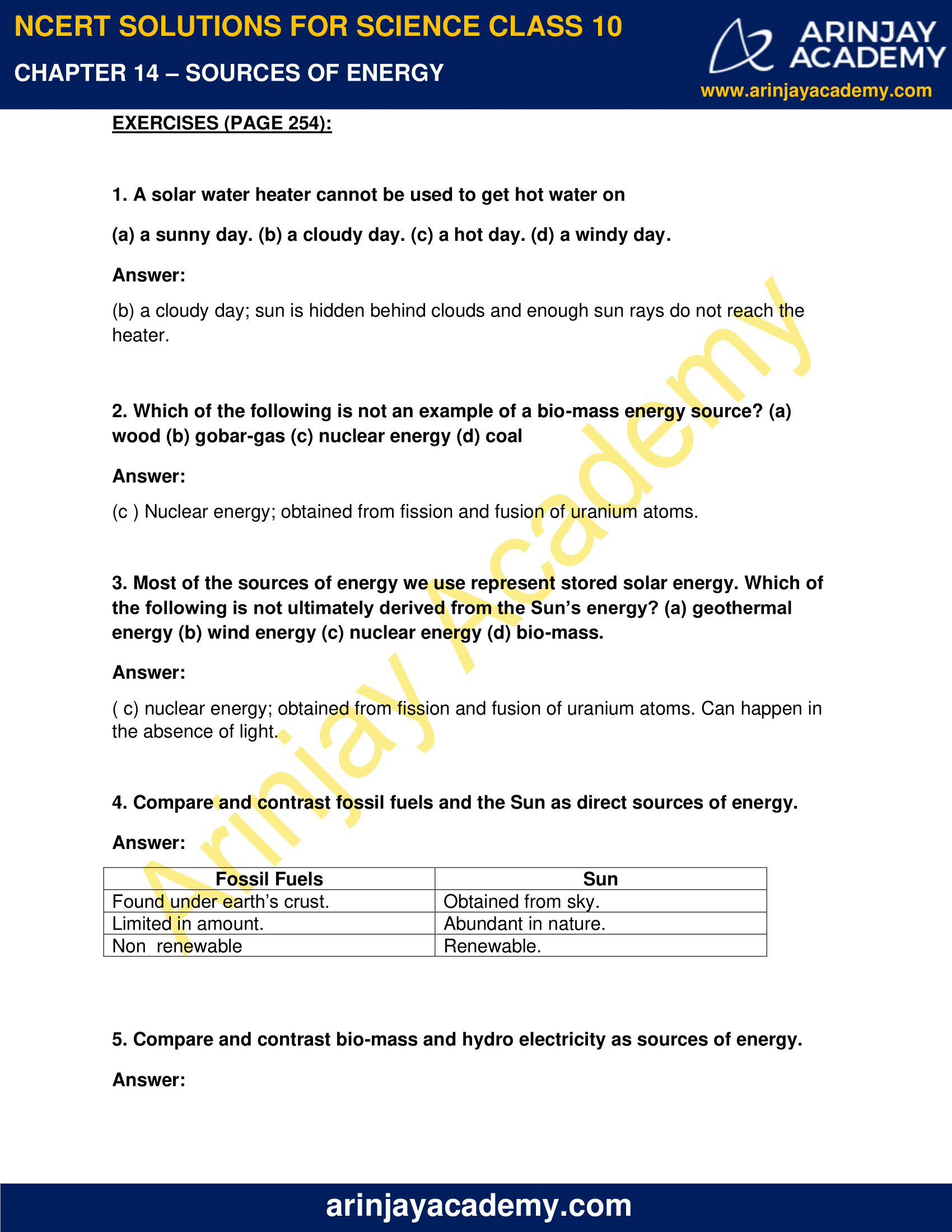 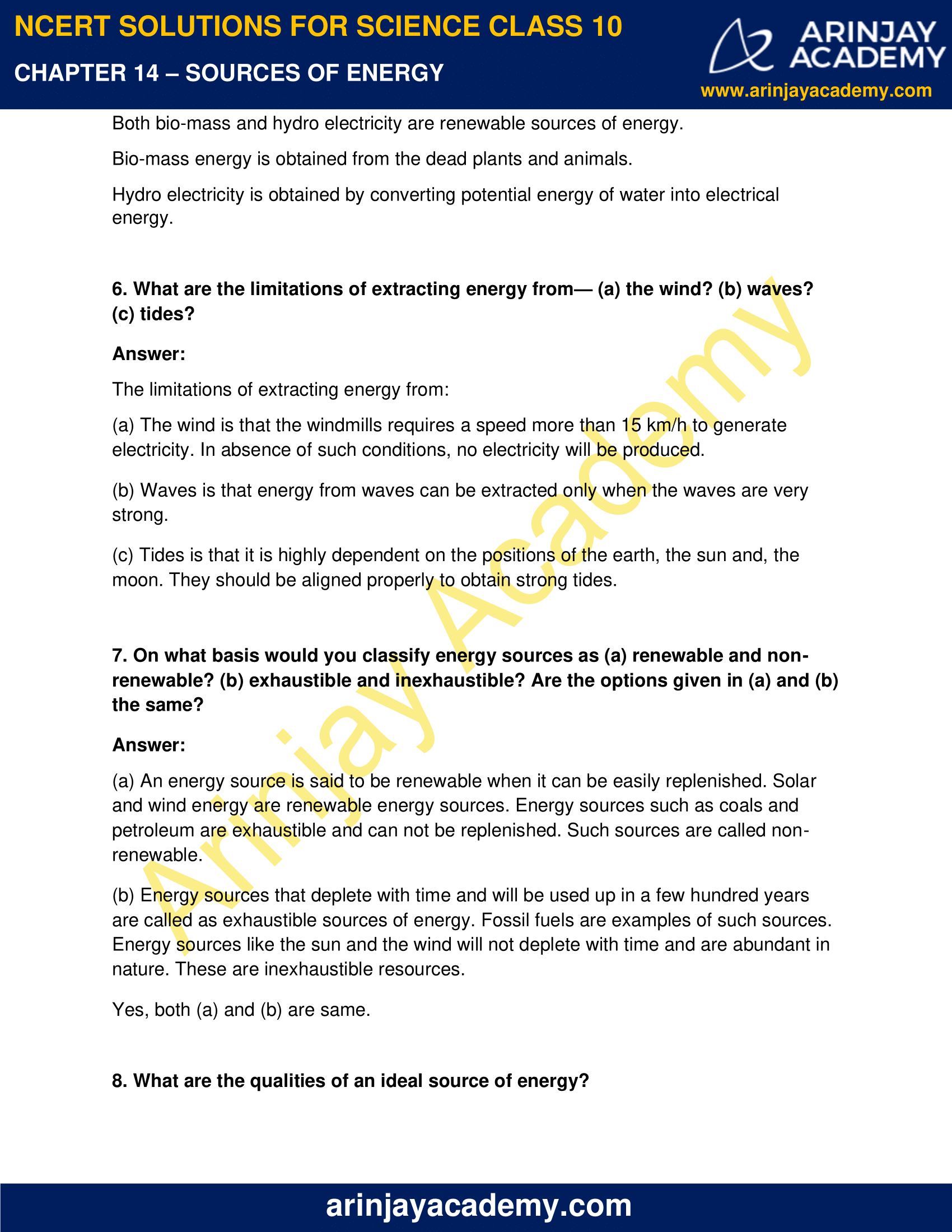 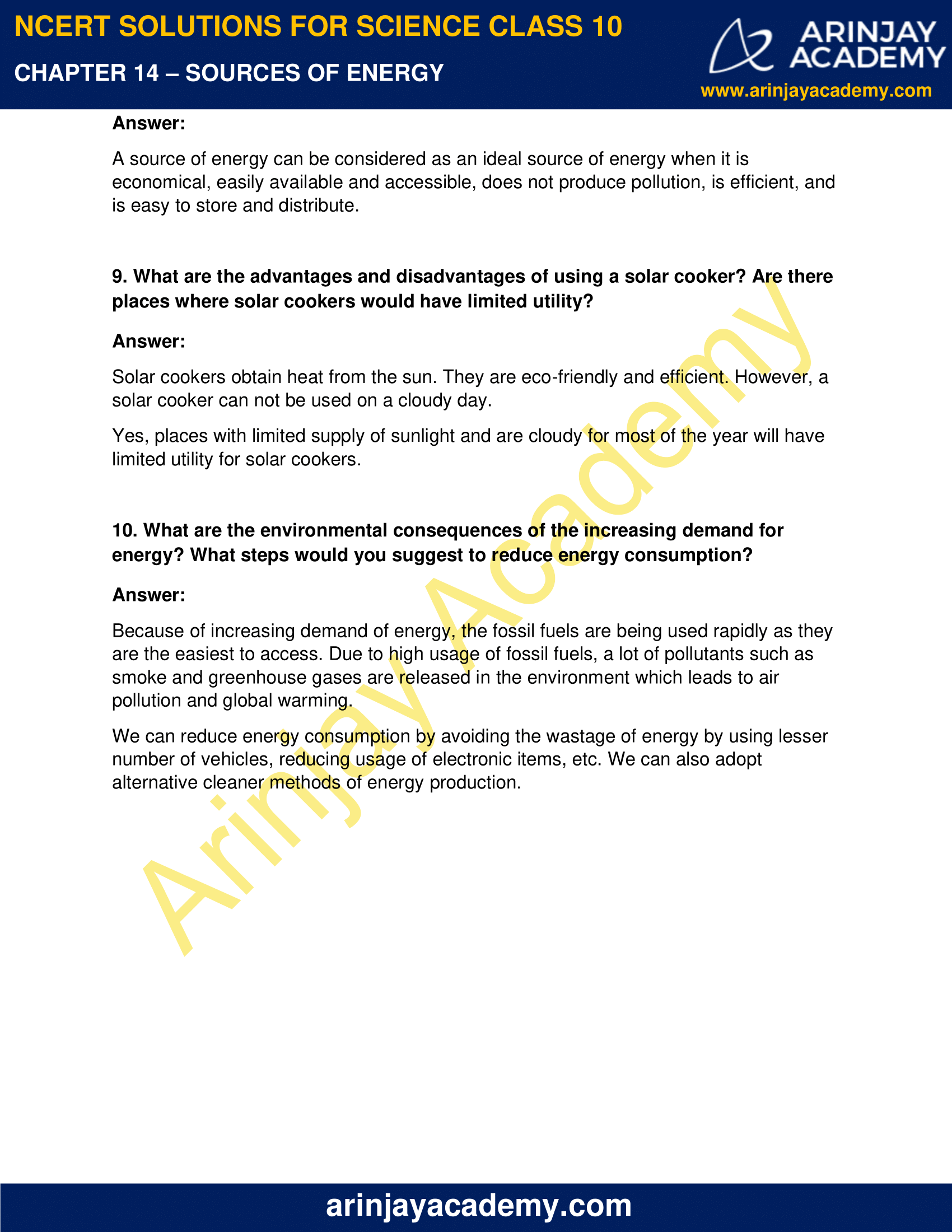 NCERT Solutions for Class 10 Science Chapter 14 – Sources of Energy, Exercises includes all in text and exercise solved questions which helps you to understand the topic covered in Chapter 14 Sources of Energy Class 10, in a better manner to help you to score good marks in your examinations.

1. What is a good source of energy?

A source of energy can be considered as a good source of energy when it is economical, easily available and accessible, does not produce pollution, is efficient and is easy to store and distribute.

A fuel is considered good when it produces large amount of heat on burning, less smoke and is easily available for usage.

3. If you could use any source of energy for heating your food, which one would you use and why?

I would use natural gas for heating my food because it is easily available, is environment friendly, and even after being highly inflammable, it is easy to store, transport and control.

1. What are the disadvantages of fossil fuels?

The various disadvantages of fossil fuels are:

2. Why are we looking at alternate sources of energy?

The fossil fuels are exhaustible in nature. They are non-renewable sources of energy and once exhausted, cannot be replenished. Also, use of fossil fuels causes a lot of pollution to the environment. So, its better to switch to cleaner options like solar power.

3. How has the traditional use of wind and water energy been modified for our convenience?

Traditionally, wind energy was used to do mechanical wok like pulling and lifting. In modern times, the kinetic energy of the wind is converted into electrical energy by the rotatory motion of blades which turn the turbine of an electric generator to produce electricity.

1. What kind of mirror – concave, convex or plain – would be best suited for use in a solar cooker? Why?

For the solar cooker to work, a lot of heat needs to be concentrated at one point. This can be done with the help of a concave mirror. It will reflect the light rays and focus the sunlight at one point.

2. What are the limitations of the energy that can be obtained from the oceans?

We can obtain wave, tidal, and ocean thermal energy from oceans. However, it has the following limitations:

3. What is geothermal energy?

The heat energy obtained from Earth is called as geothermal energy. Due to geological changes, molten rocks formed in the deeper hot regions of earth’s crust are pushed upward and trapped in certain regions called ‘hot spots’. When underground water comes in contact with these hot spots, steam is generated. Hot water from that region finds outlets at the surface known as hot springs. The steam trapped in rocks in this process is routed through a pipe to a turbine and is used to generate electricity.

4. What are the advantages of nuclear energy?

There are following advantages of nuclear energy:

1. Can any source of energy be pollution-free? Why or why not?

No. None of the sources of energy are pollution free. Clean energy sources like solar power and nuclear power may not pollute the environment in conventional ways, but their by products are considered extremely harmful.  For example, the materials used in making of solar cells can be toxic to the environment. Similarly, the by-products obtained in nuclear fission emit high radiation and must be disposed carefully.

2. Hydrogen has been used as a rocket fuel. Would you consider it a cleaner fuel than CNG? Why or why not?

CNGs contain hydrocarbons. Because of presence of carbon molecules, they produce pollutants. Hydrogen undergoes complete combustion and does not produce any pollutants. Hence, hydrogen is used as a rocket fuel and is cleaner than CNG.

1. Name two energy sources that you would consider to be renewable. Give reasons for your choices.

Sun and wind are two energy sources that are considered to be renewable. Solar energy is obtained from sun and wind energy from wind. They can be considered as renewable sources of energy because they are abundant in nature, can last for billions of years, and are easily available for usage.

2. Give the names of two energy sources that you would consider to be exhaustible. Give reasons for your choices.

Two energy sources that are exhaustible are:

1. A solar water heater cannot be used to get hot water on

(b) a cloudy day; sun is hidden behind clouds and enough sun rays do not reach the heater.

2. Which of the following is not an example of a bio-mass energy source? (a) wood (b) gobar-gas (c) nuclear energy (d) coal

3. Most of the sources of energy we use represent stored solar energy. Which of the following is not ultimately derived from the Sun’s energy? (a) geothermal energy (b) wind energy (c) nuclear energy (d) bio-mass.

( c) nuclear energy; obtained from fission and fusion of uranium atoms. Can happen in the absence of light.

4. Compare and contrast fossil fuels and the Sun as direct sources of energy.

5. Compare and contrast bio-mass and hydro electricity as sources of energy.

Both bio-mass and hydro electricity are renewable sources of energy.

Bio-mass energy is obtained from the dead plants and animals.

Hydro electricity is obtained by converting potential energy of water into electrical energy.

6. What are the limitations of extracting energy from— (a) the wind? (b) waves? (c) tides?

The limitations of extracting energy from:

(a) The wind is that the windmills requires a speed more than 15 km/h to generate electricity. In absence of such conditions, no electricity will be produced.

(b) Waves is that energy from waves can be extracted only when the waves are very strong.

(c) Tides is that it is highly dependent on the positions of the earth, the sun and, the moon. They should be aligned properly to obtain strong tides.

7. On what basis would you classify energy sources as (a) renewable and non-renewable? (b) exhaustible and inexhaustible? Are the options given in (a) and (b) the same?

8. What are the qualities of an ideal source of energy?

A source of energy can be considered as an ideal source of energy when it is economical, easily available and accessible, does not produce pollution, is efficient, and is easy to store and distribute.

9. What are the advantages and disadvantages of using a solar cooker? Are there places where solar cookers would have limited utility?

Solar cookers obtain heat from the sun. They are eco-friendly and efficient. However, a solar cooker can not be used on a cloudy day.

Yes, places with limited supply of sunlight and are cloudy for most of the year will have limited utility for solar cookers.

10. What are the environmental consequences of the increasing demand for energy? What steps would you suggest to reduce energy consumption?

Because of increasing demand of energy, the fossil fuels are being used rapidly as they are the easiest to access. Due to high usage of fossil fuels, a lot of pollutants such as smoke and greenhouse gases are released in the environment which leads to air pollution and global warming.

We can reduce energy consumption by avoiding the wastage of energy by using lesser number of vehicles, reducing usage of electronic items, etc. We can also adopt alternative cleaner methods of energy production.