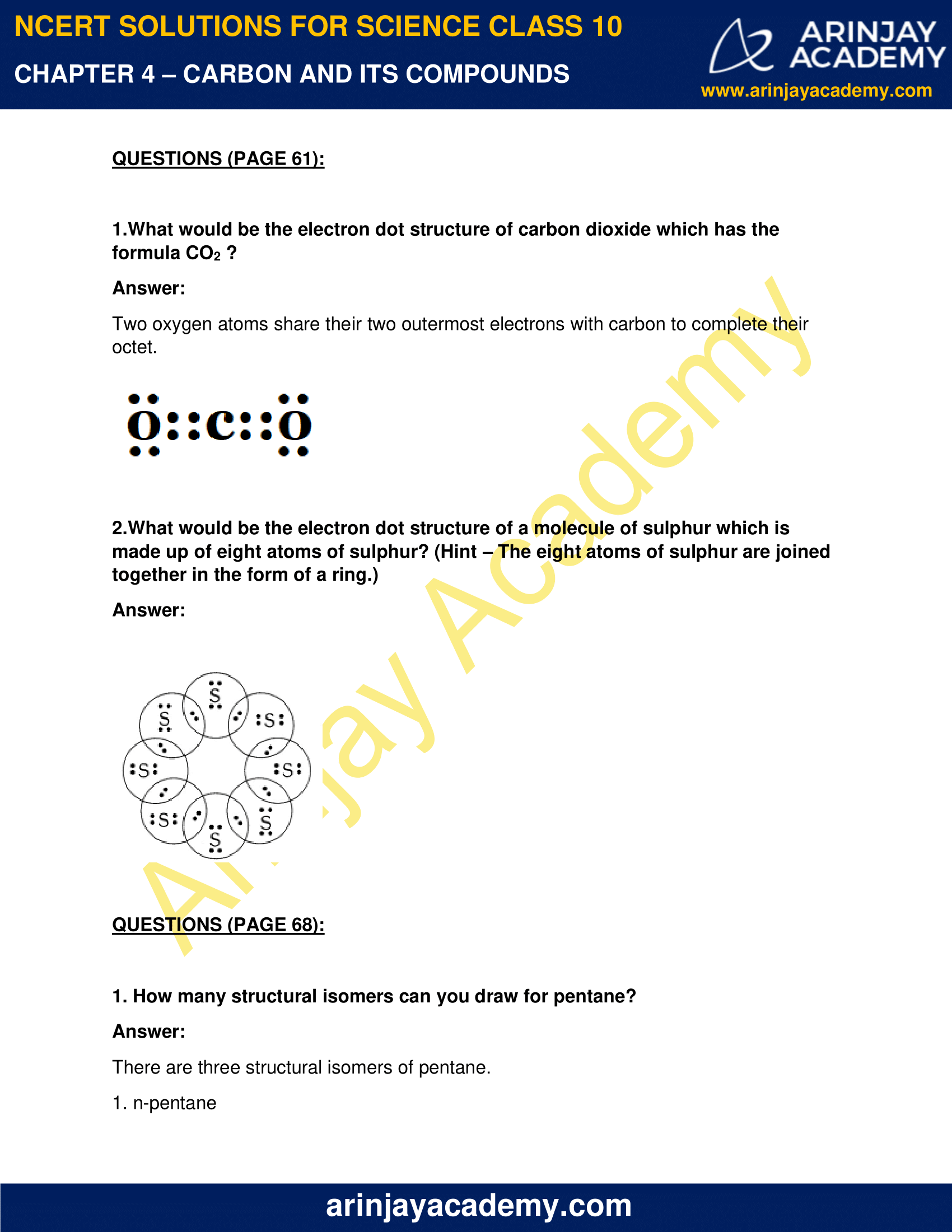 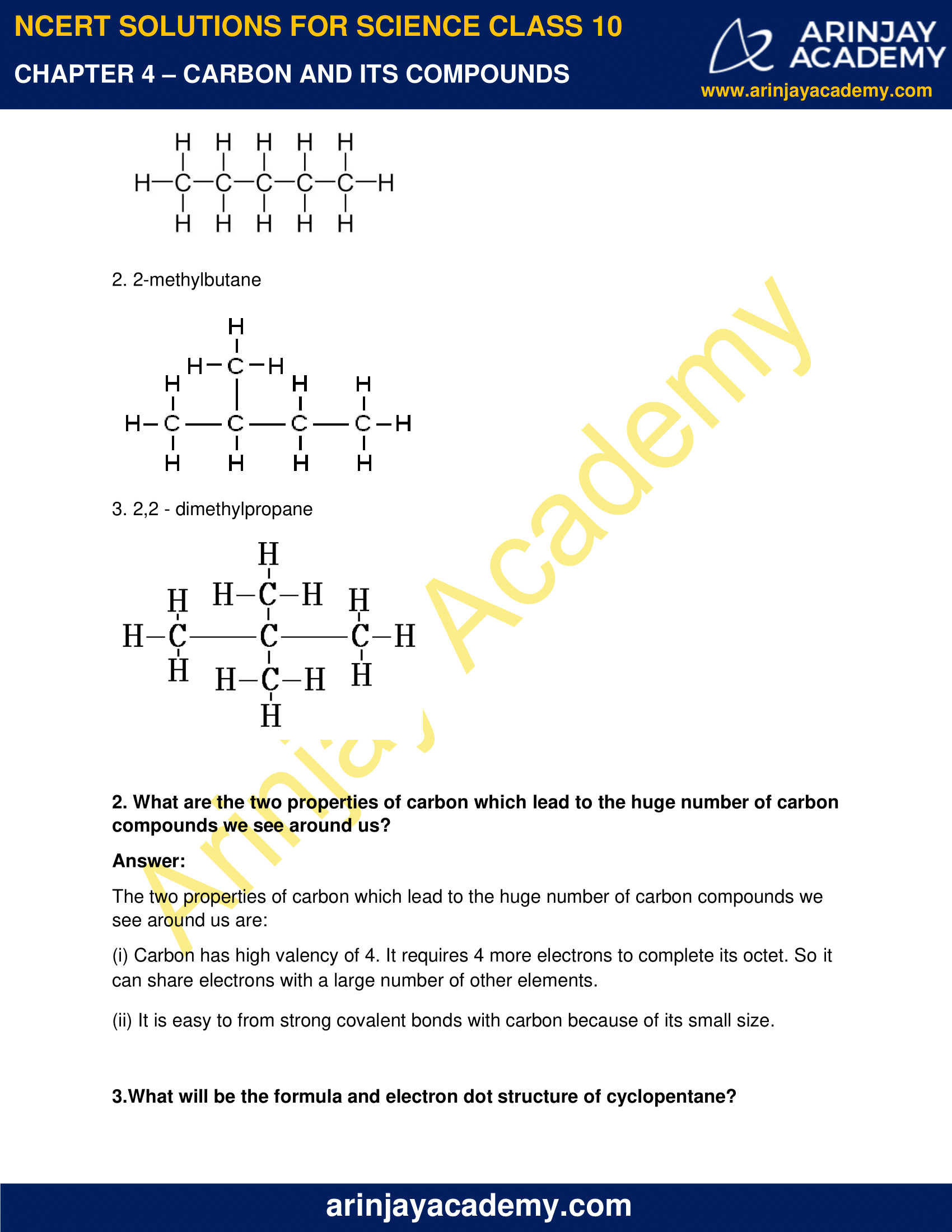 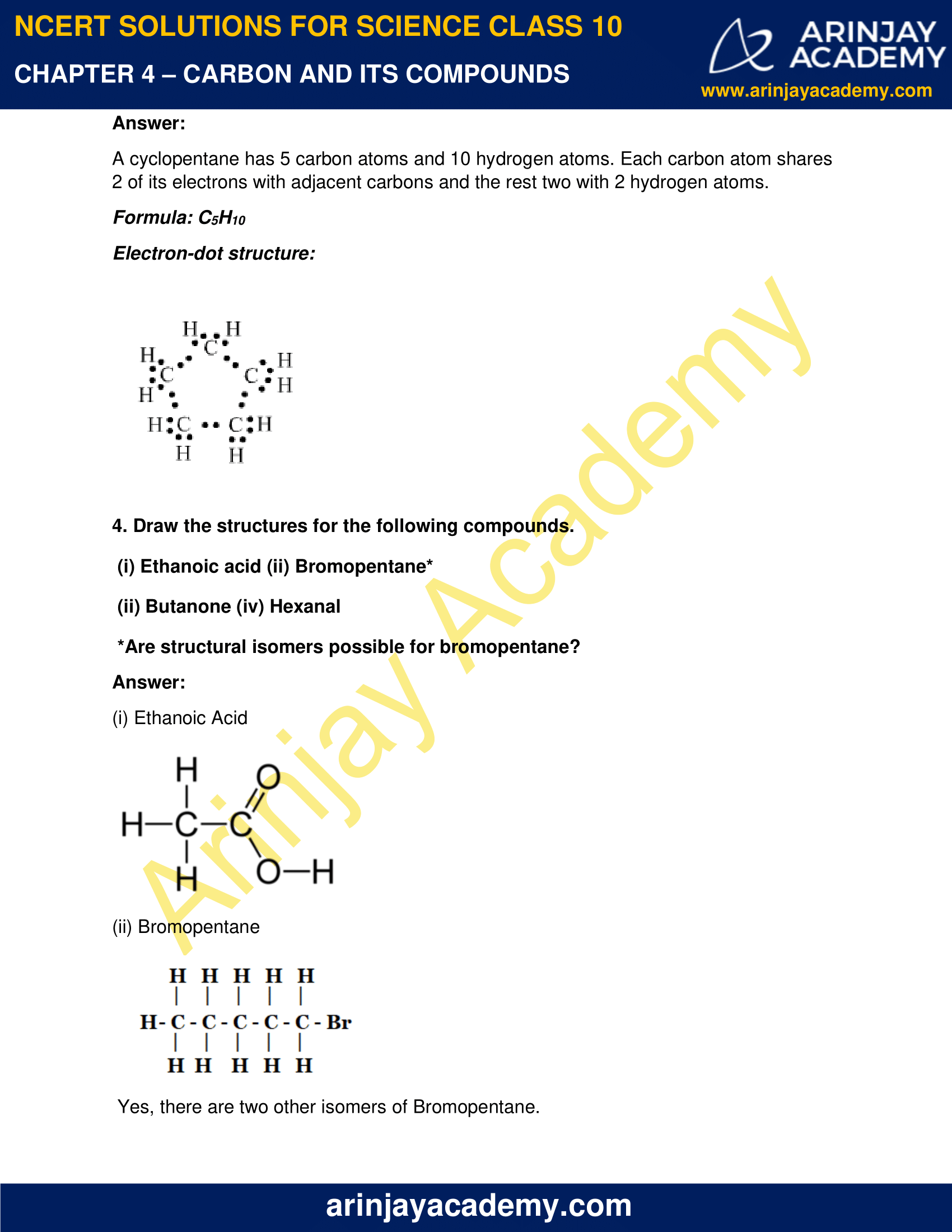 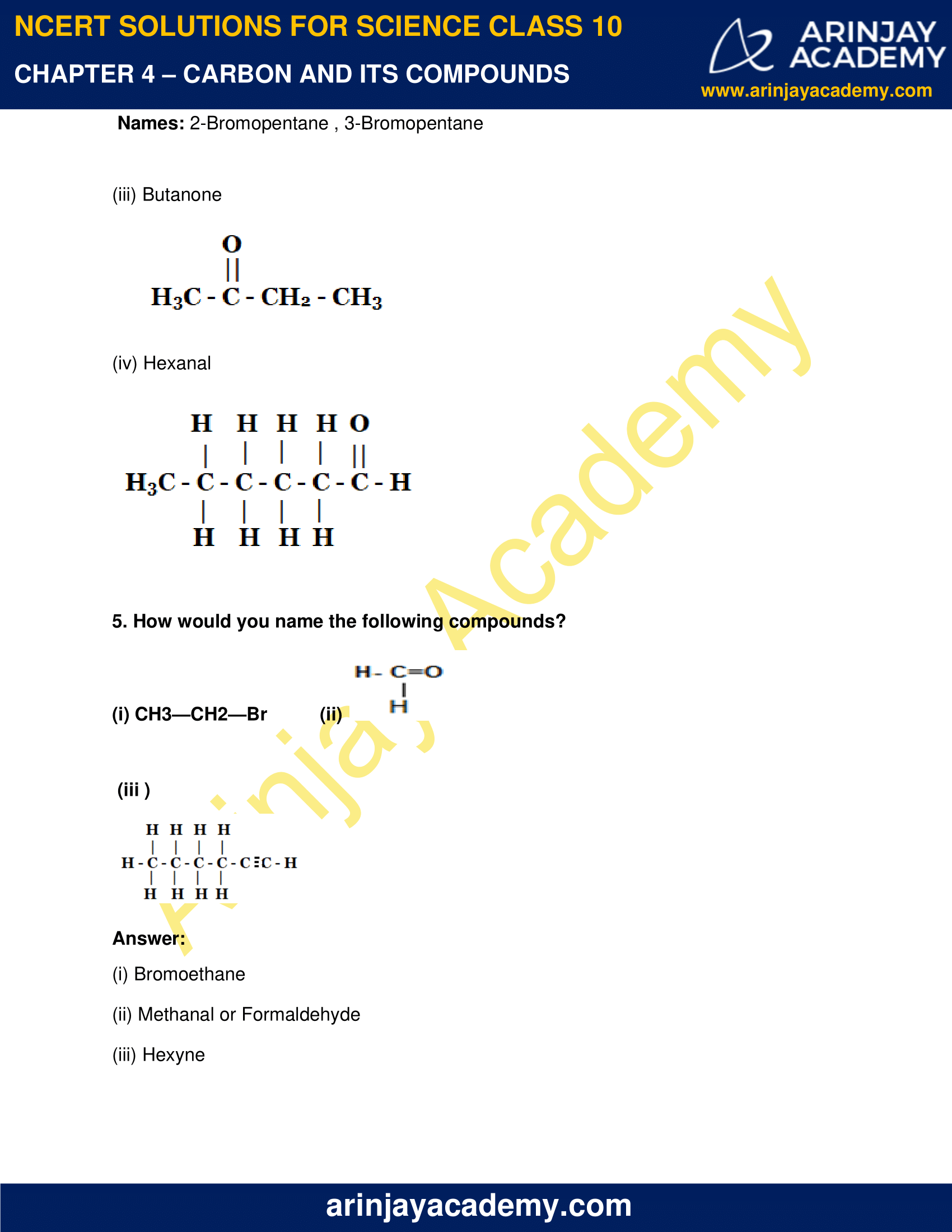 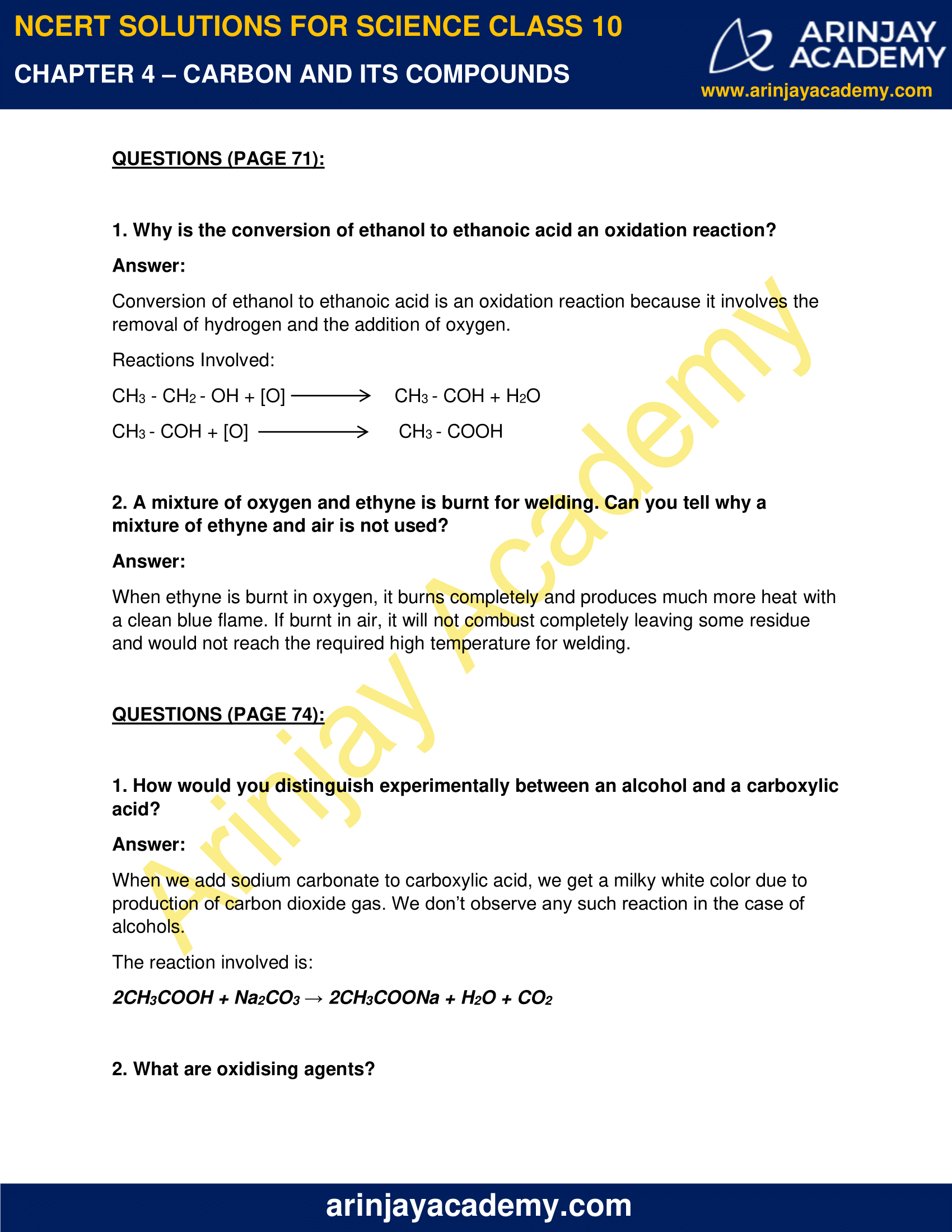 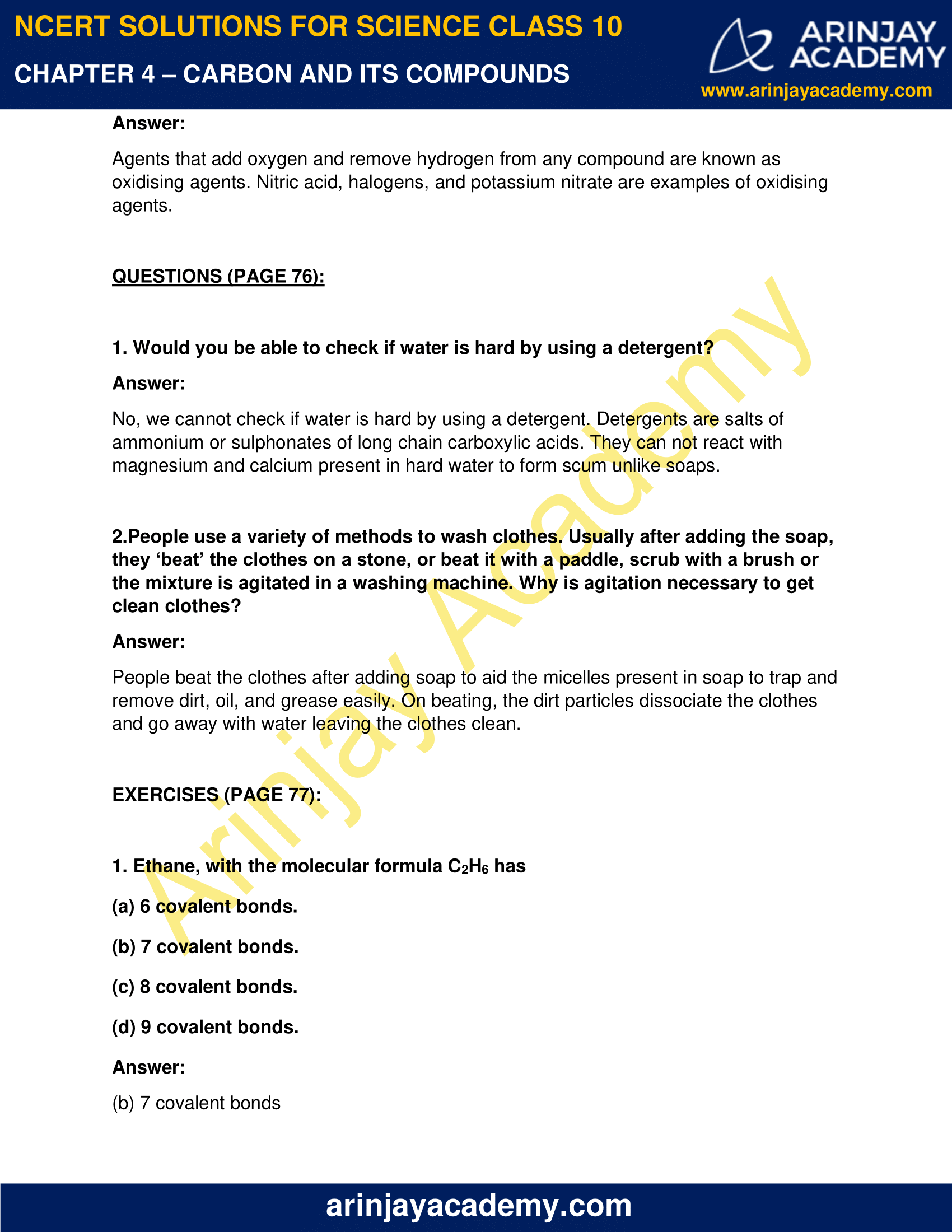 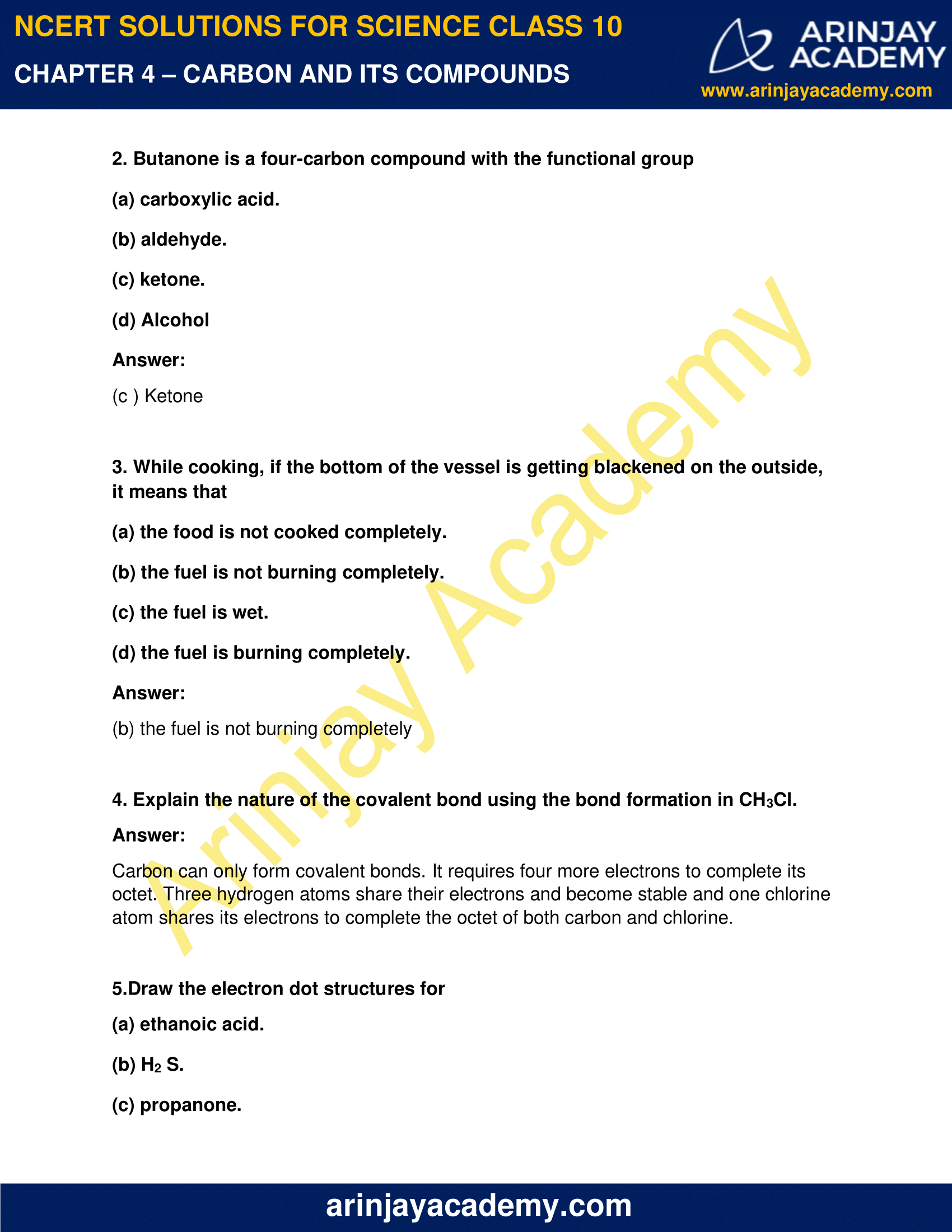 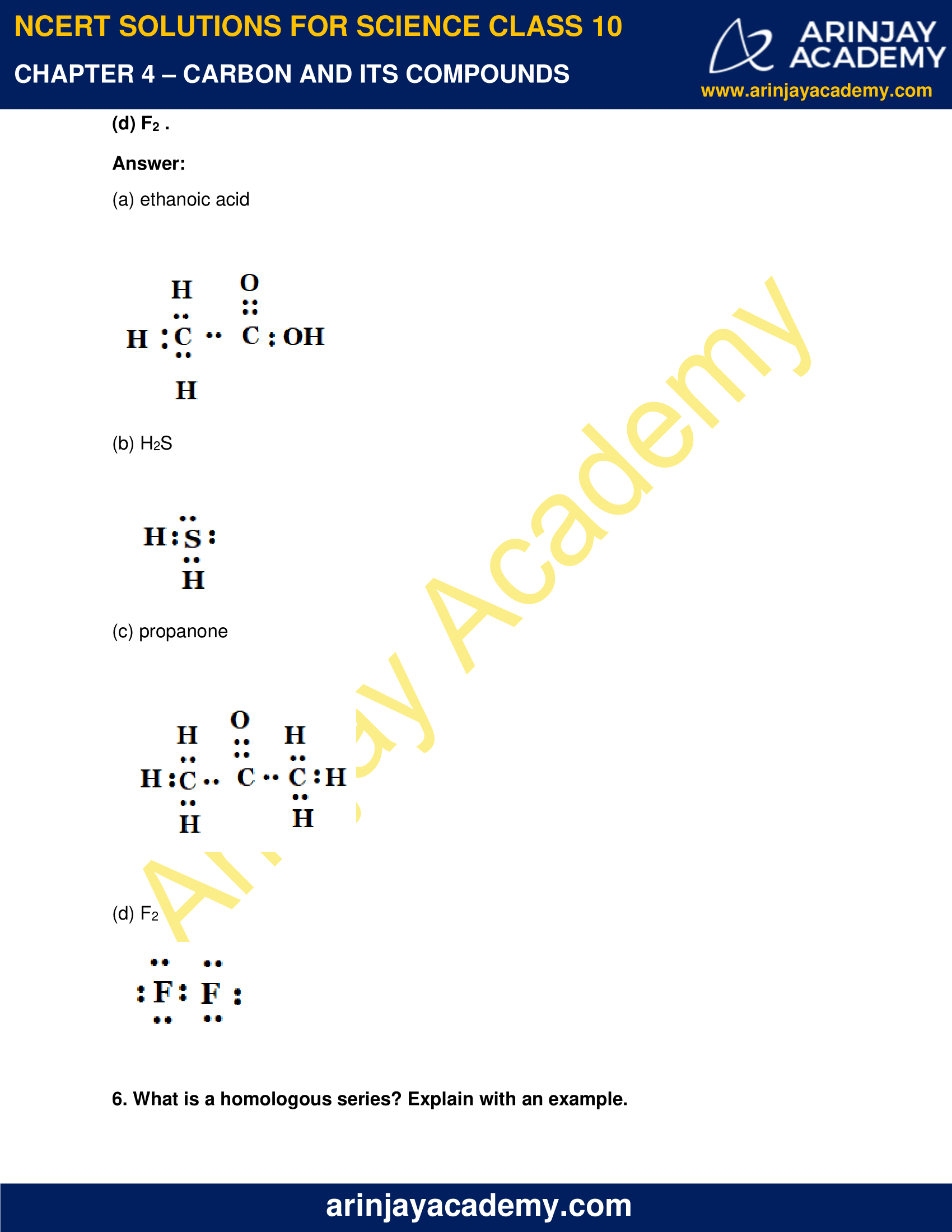 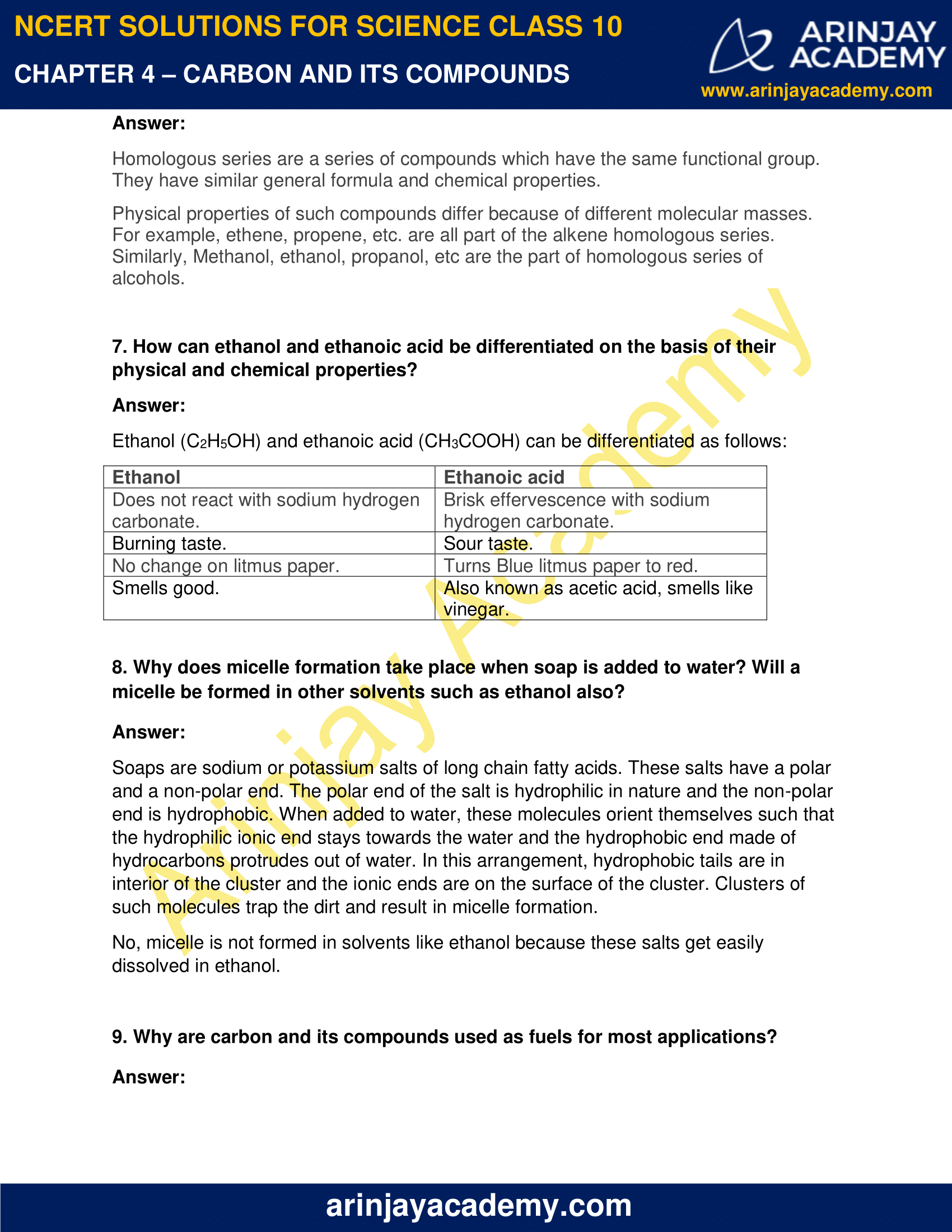 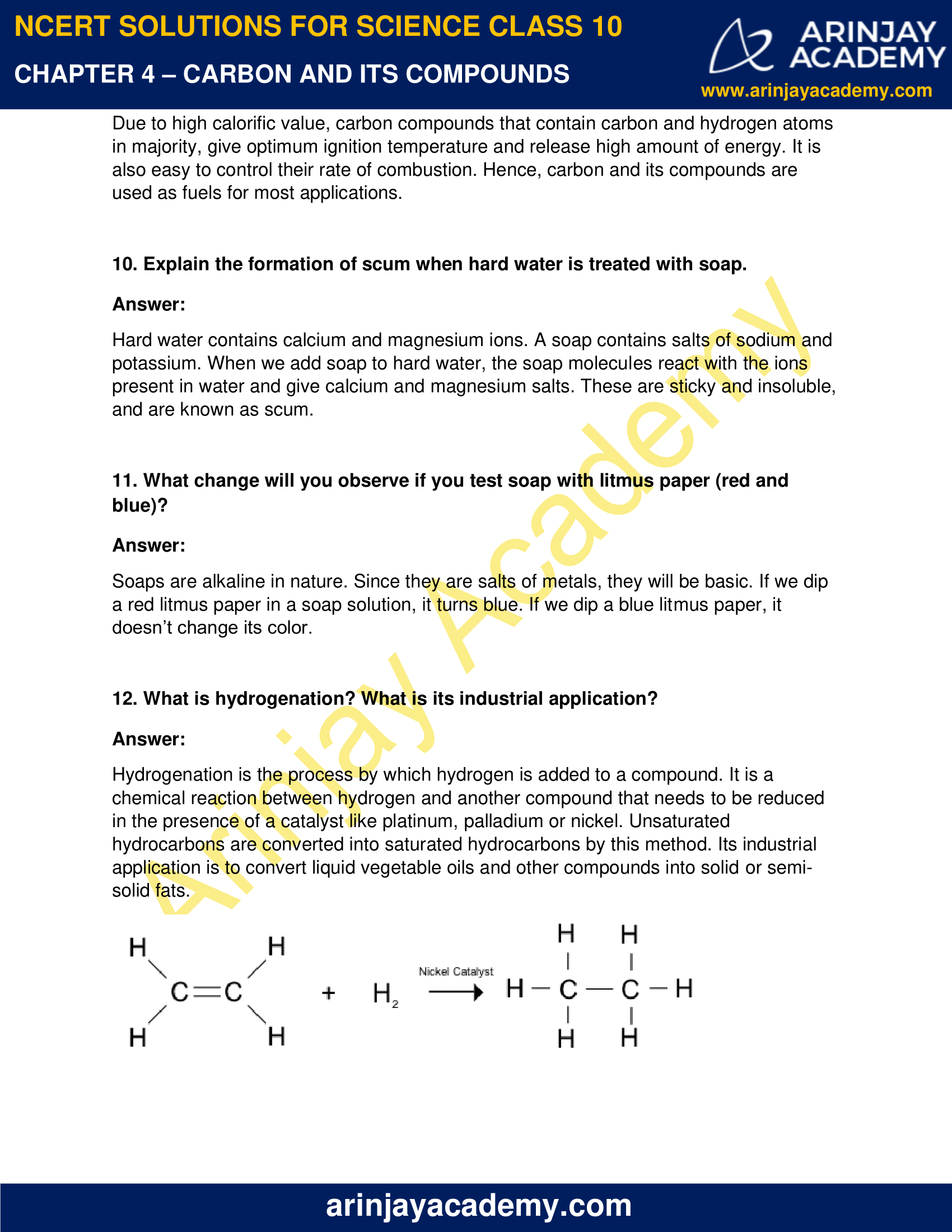 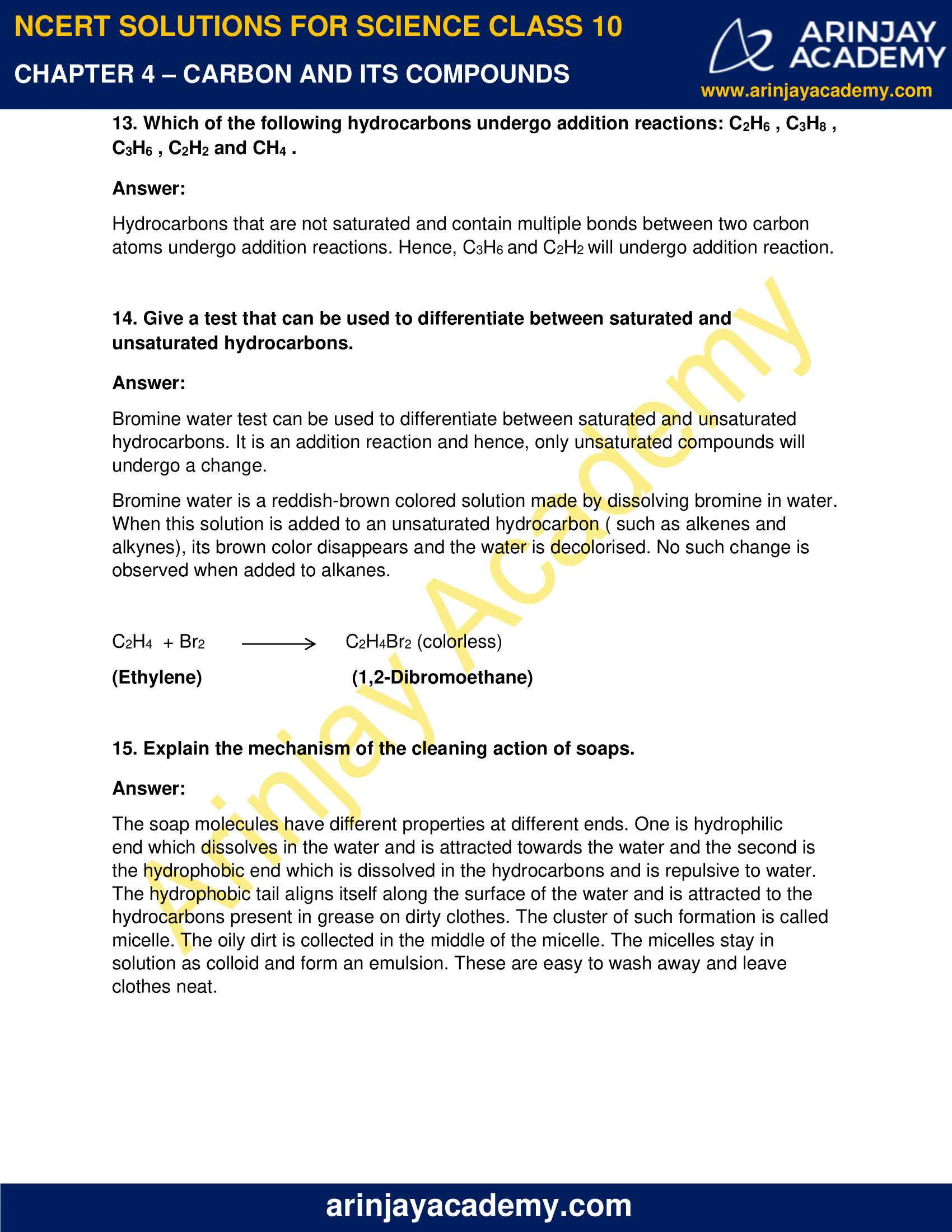 1.What would be the electron dot structure of carbon dioxide which has the formula CO2 ?

1. How many structural isomers can you draw for pentane?

There are three structural isomers of pentane. 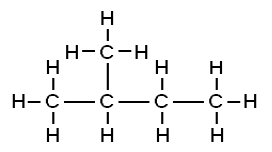 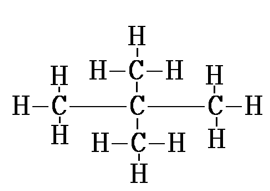 2. What are the two properties of carbon which lead to the huge number of carbon compounds we see around us?

The two properties of carbon which lead to the huge number of carbon compounds we see around us are:

(i) Carbon has high valency of 4. It requires 4 more electrons to complete its octet. So it can share electrons with a large number of other elements.

(ii) It is easy to from strong covalent bonds with carbon because of its small size.

3.What will be the formula and electron dot structure of cyclopentane? 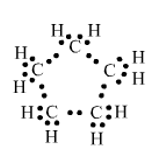 4. Draw the structures for the following compounds.

*Are structural isomers possible for bromopentane?

Yes, there are two other isomers of Bromopentane.

5. How would you name the following compounds?

1. Why is the conversion of ethanol to ethanoic acid an oxidation reaction?

Conversion of ethanol to ethanoic acid is an oxidation reaction because it involves the removal of hydrogen and the addition of oxygen.

2. A mixture of oxygen and ethyne is burnt for welding. Can you tell why a mixture of ethyne and air is not used?

When ethyne is burnt in oxygen, it burns completely and produces much more heat with a clean blue flame. If burnt in air, it will not combust completely leaving some residue and would not reach the required high temperature for welding.

1. How would you distinguish experimentally between an alcohol and a carboxylic acid?

When we add sodium carbonate to carboxylic acid, we get a milky white color due to production of carbon dioxide gas. We don’t observe any such reaction in the case of alcohols.

The reaction involved is:

2. What are oxidising agents?

1. Would you be able to check if water is hard by using a detergent?

No, we cannot check if water is hard by using a detergent. Detergents are salts of ammonium or sulphonates of long chain carboxylic acids. They can not react with magnesium and calcium present in hard water to form scum unlike soaps.

2.People use a variety of methods to wash clothes. Usually after adding the soap, they ‘beat’ the clothes on a stone, or beat it with a paddle, scrub with a brush or the mixture is agitated in a washing machine. Why is agitation necessary to get clean clothes?

People beat the clothes after adding soap to aid the micelles present in soap to trap and remove dirt, oil, and grease easily. On beating, the dirt particles dissociate the clothes and go away with water leaving the clothes clean.

1. Ethane, with the molecular formula C2H6 has

2. Butanone is a four-carbon compound with the functional group

3. While cooking, if the bottom of the vessel is getting blackened on the outside, it means that

(a) the food is not cooked completely.

(b) the fuel is not burning completely.

(d) the fuel is burning completely.

(b) the fuel is not burning completely

4. Explain the nature of the covalent bond using the bond formation in CH3Cl.

5.Draw the electron dot structures for

6. What is a homologous series? Explain with an example.

Homologous series are a series of compounds which have the same functional group. They have similar general formula and chemical properties.

Physical properties of such compounds differ because of different molecular masses. For example, ethene, propene, etc. are all part of the alkene homologous series. Similarly, Methanol, ethanol, propanol, etc are the part of homologous series of alcohols.

7. How can ethanol and ethanoic acid be differentiated on the basis of their physical and chemical properties?

Ethanol (C2H5OH) and ethanoic acid (CH3COOH) can be differentiated as follows:

8. Why does micelle formation take place when soap is added to water? Will a micelle be formed in other solvents such as ethanol also?

Soaps are sodium or potassium salts of long chain fatty acids. These salts have a polar and a non-polar end. The polar end of the salt is hydrophilic in nature and the non-polar end is hydrophobic. When added to water, these molecules orient themselves such that the hydrophilic ionic end stays towards the water and the hydrophobic end made of hydrocarbons protrudes out of water. In this arrangement, hydrophobic tails are in interior of the cluster and the ionic ends are on the surface of the cluster. Clusters of such molecules trap the dirt and result in micelle formation.

No, micelle is not formed in solvents like ethanol because these salts get easily dissolved in ethanol.

9. Why are carbon and its compounds used as fuels for most applications?

Due to high calorific value, carbon compounds that contain carbon and hydrogen atoms in majority, give optimum ignition temperature and release high amount of energy. It is also easy to control their rate of combustion. Hence, carbon and its compounds are used as fuels for most applications.

10. Explain the formation of scum when hard water is treated with soap.

11. What change will you observe if you test soap with litmus paper (red and blue)?

Soaps are alkaline in nature. Since they are salts of metals, they will be basic. If we dip a red litmus paper in a soap solution, it turns blue. If we dip a blue litmus paper, it doesn’t change its color.

12. What is hydrogenation? What is its industrial application?

Hydrogenation is the process by which hydrogen is added to a compound. It is a chemical reaction between hydrogen and another compound that needs to be reduced in the presence of a catalyst like platinum, palladium or nickel. Unsaturated hydrocarbons are converted into saturated hydrocarbons by this method. Its industrial application is to convert liquid vegetable oils and other compounds into solid or semi-solid fats.

14. Give a test that can be used to differentiate between saturated and unsaturated hydrocarbons.

Bromine water test can be used to differentiate between saturated and unsaturated hydrocarbons. It is an addition reaction and hence, only unsaturated compounds will undergo a change.

Bromine water is a reddish-brown colored solution made by dissolving bromine in water. When this solution is added to an unsaturated hydrocarbon ( such as alkenes and alkynes), its brown color disappears and the water is decolorised. No such change is observed when added to alkanes.

15. Explain the mechanism of the cleaning action of soaps.

The soap molecules have different properties at different ends. One is hydrophilic end which dissolves in the water and is attracted towards the water and the second is the hydrophobic end which is dissolved in the hydrocarbons and is repulsive to water. The hydrophobic tail aligns itself along the surface of the water and is attracted to the hydrocarbons present in grease on dirty clothes. The cluster of such formation is called micelle. The oily dirt is collected in the middle of the micelle. The micelles stay in solution as colloid and form an emulsion. These are easy to wash away and leave clothes neat.

Topics Covered in Carbon and its Compounds Class 10 Science