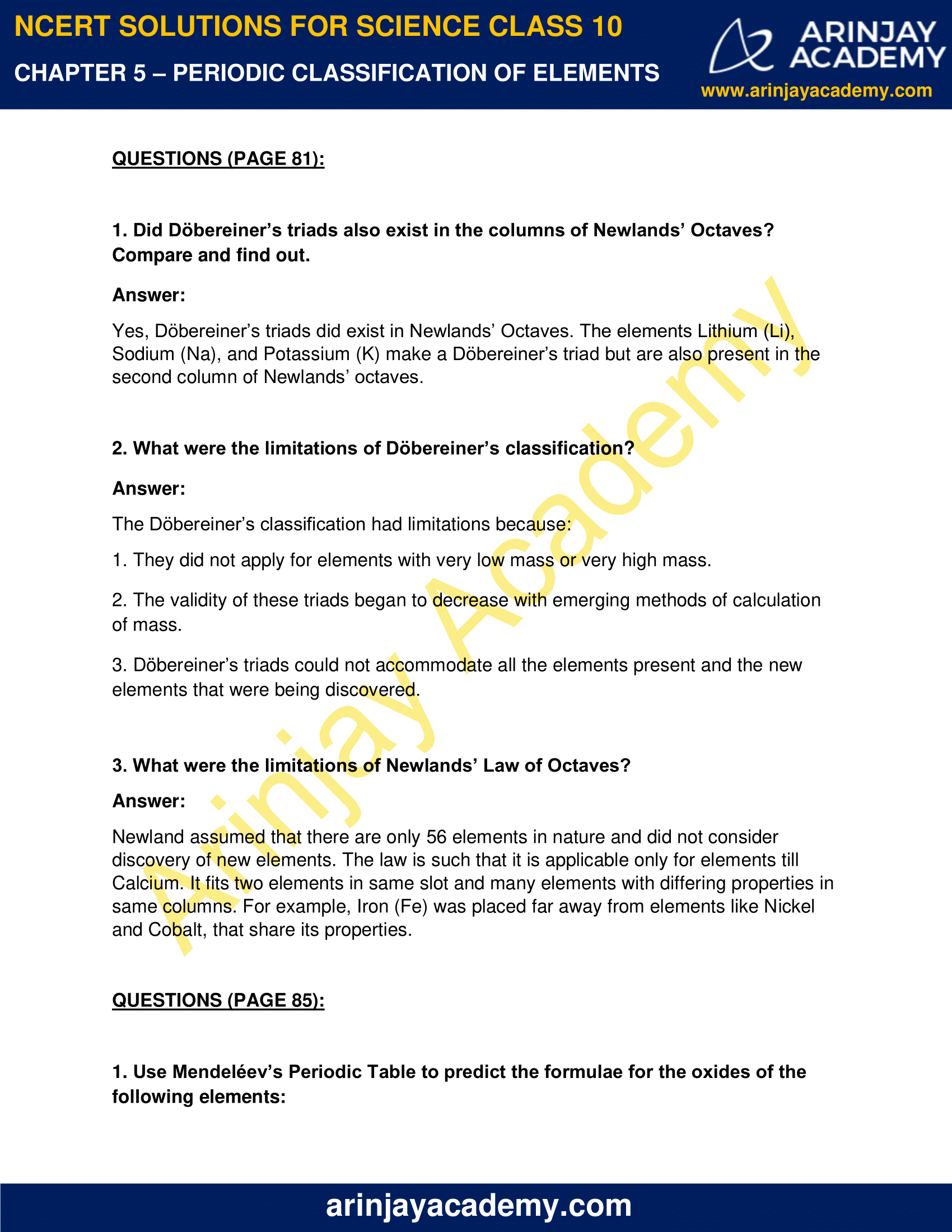 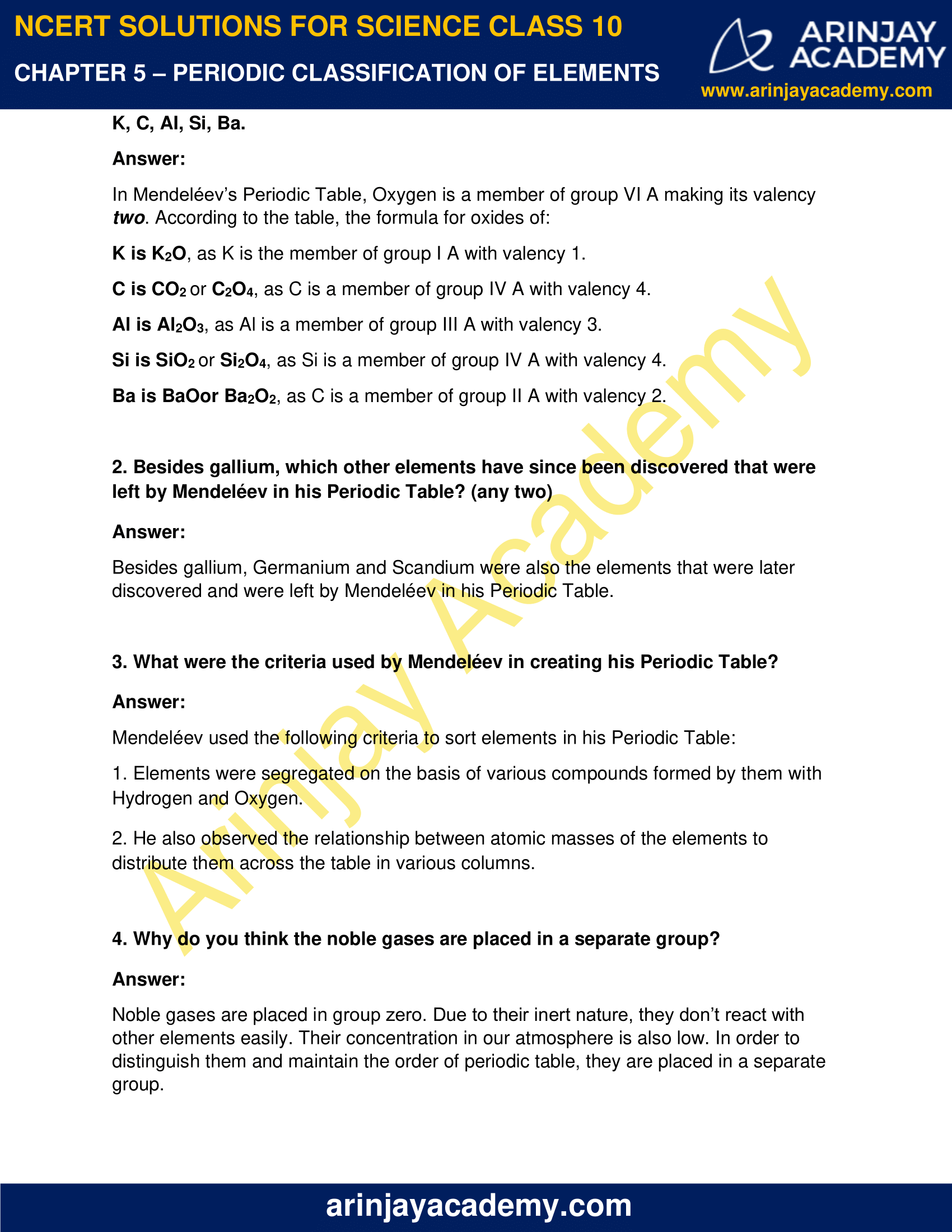 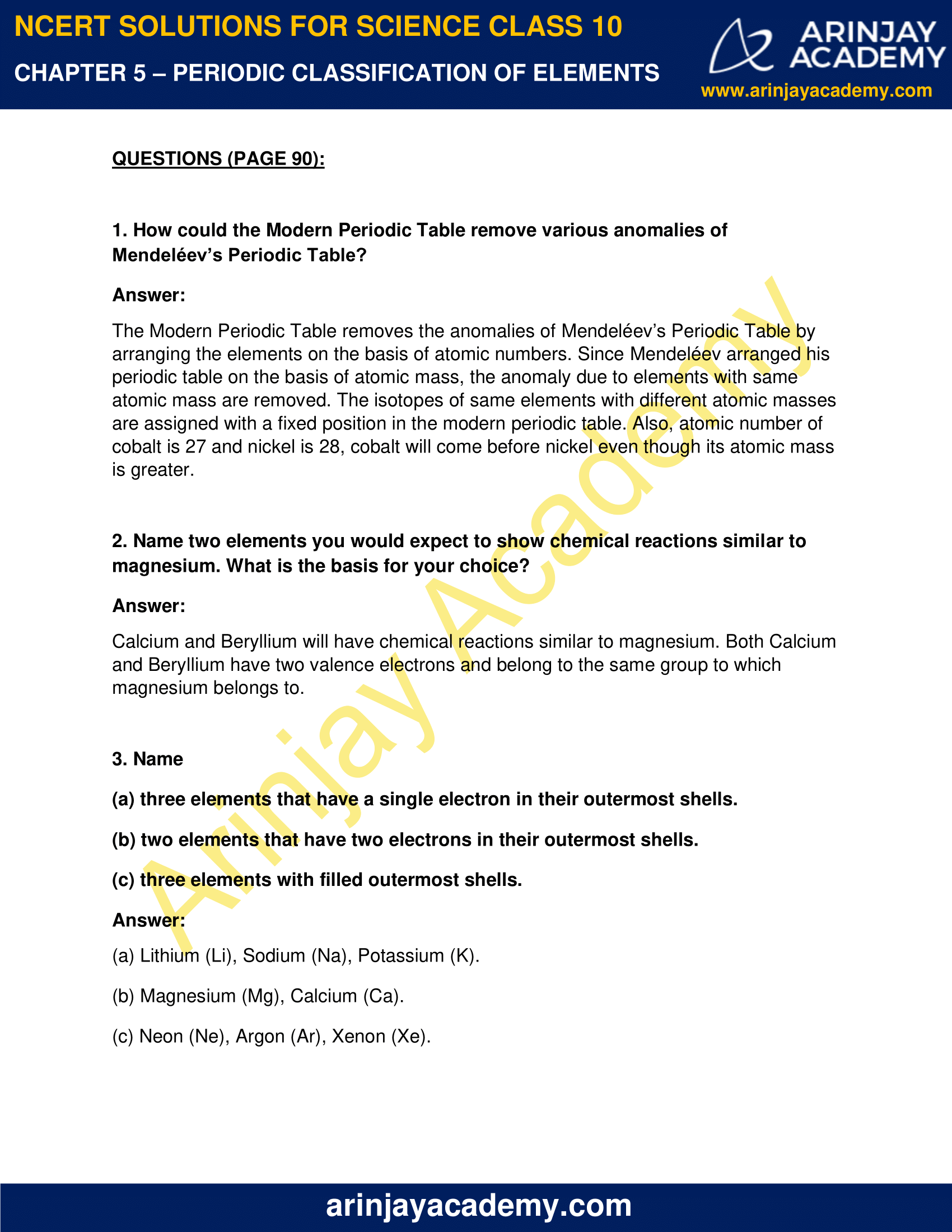 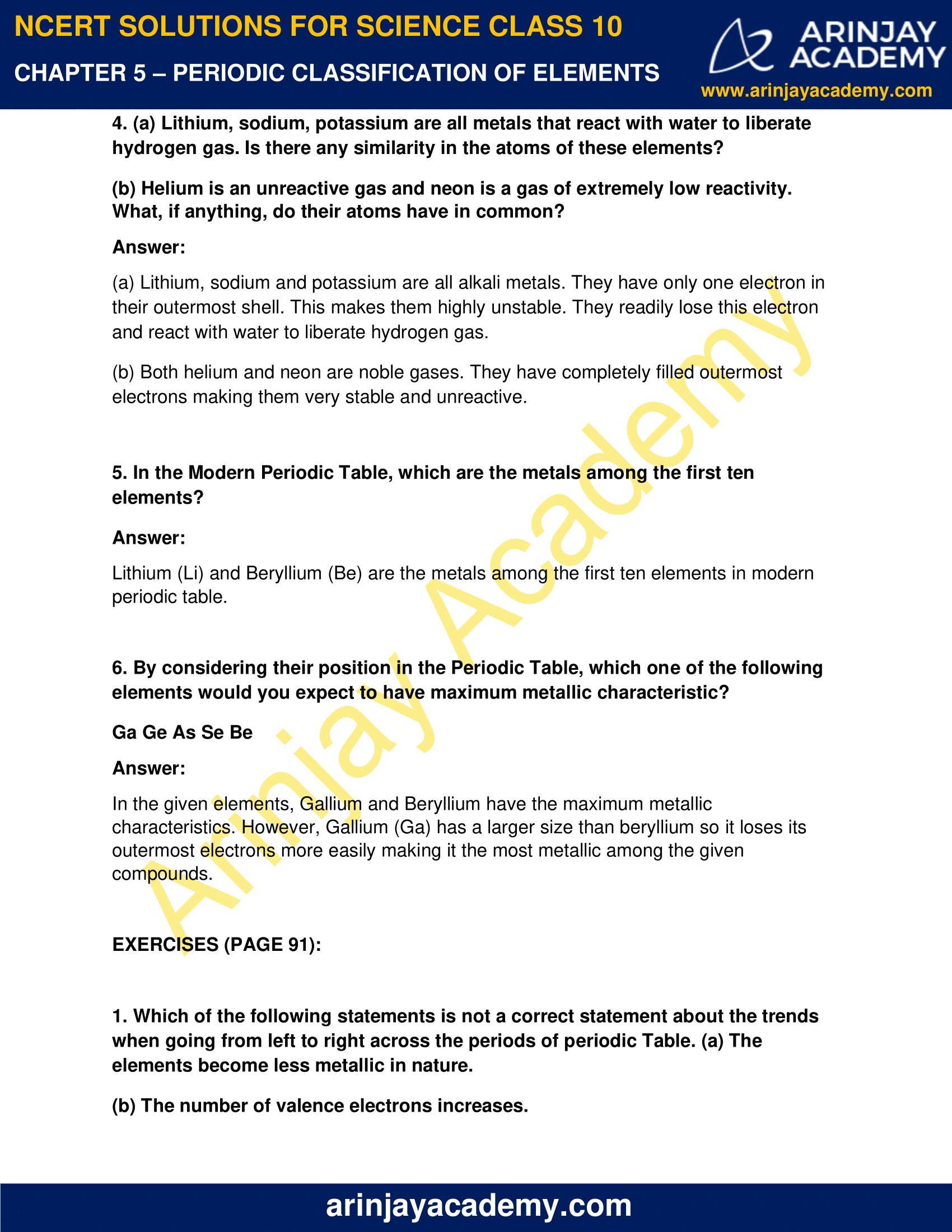 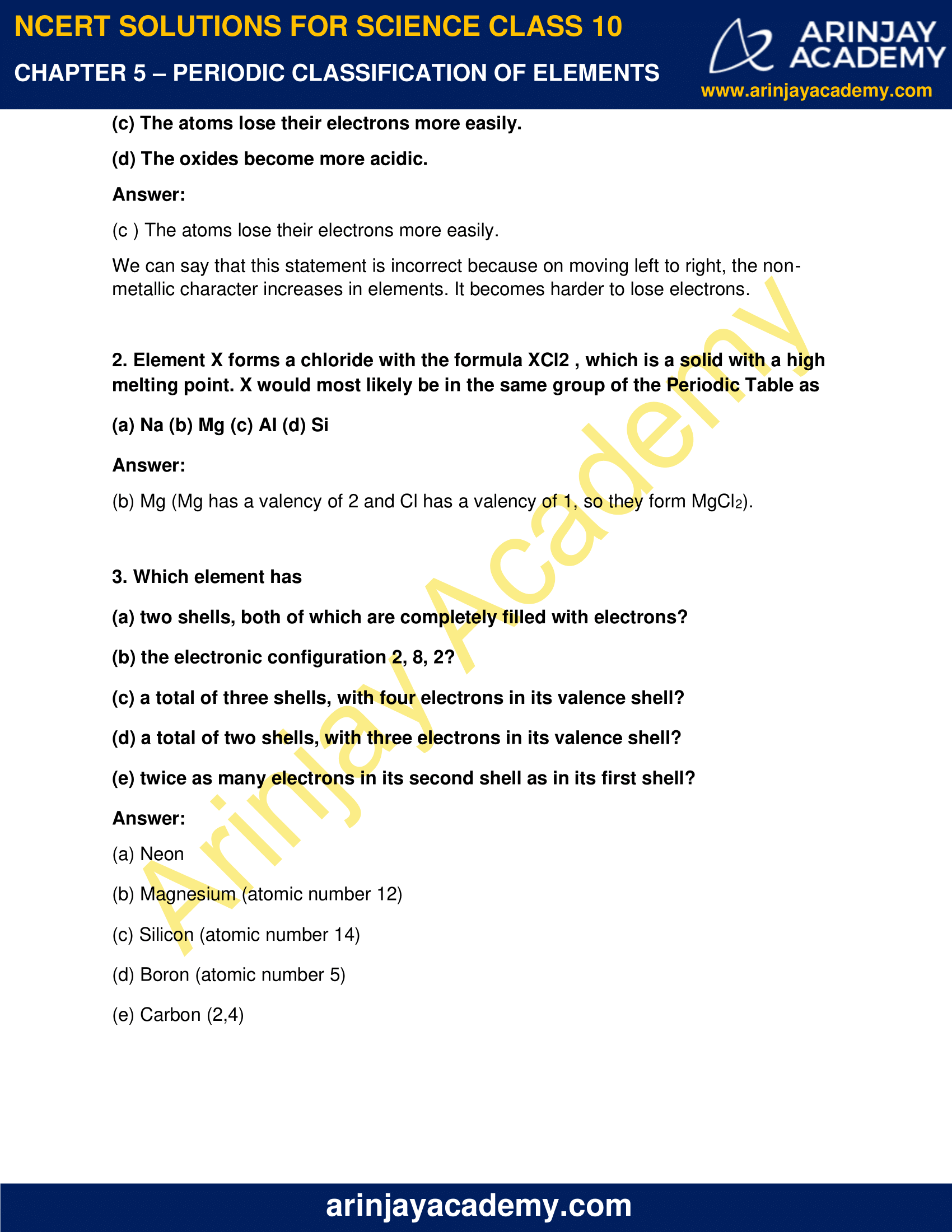 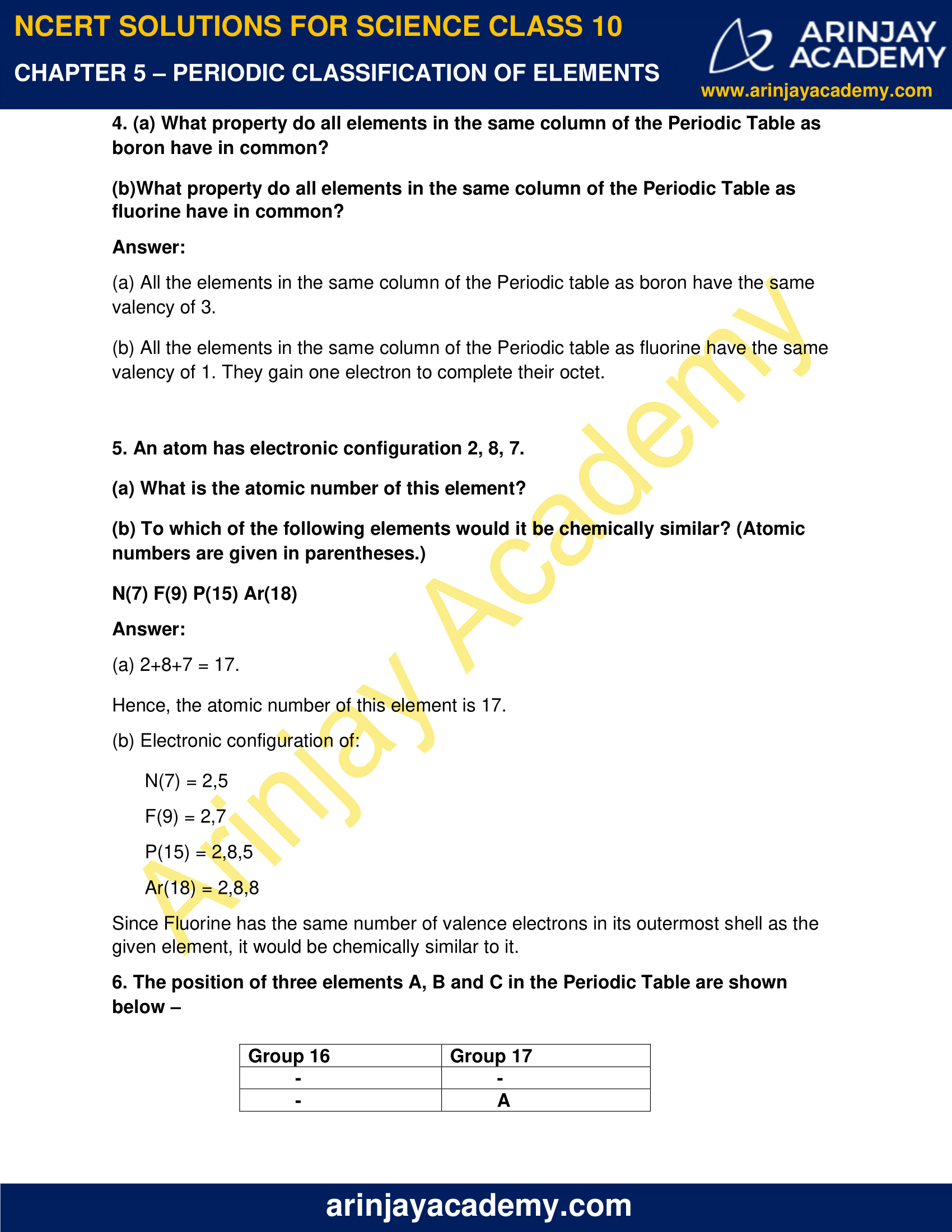 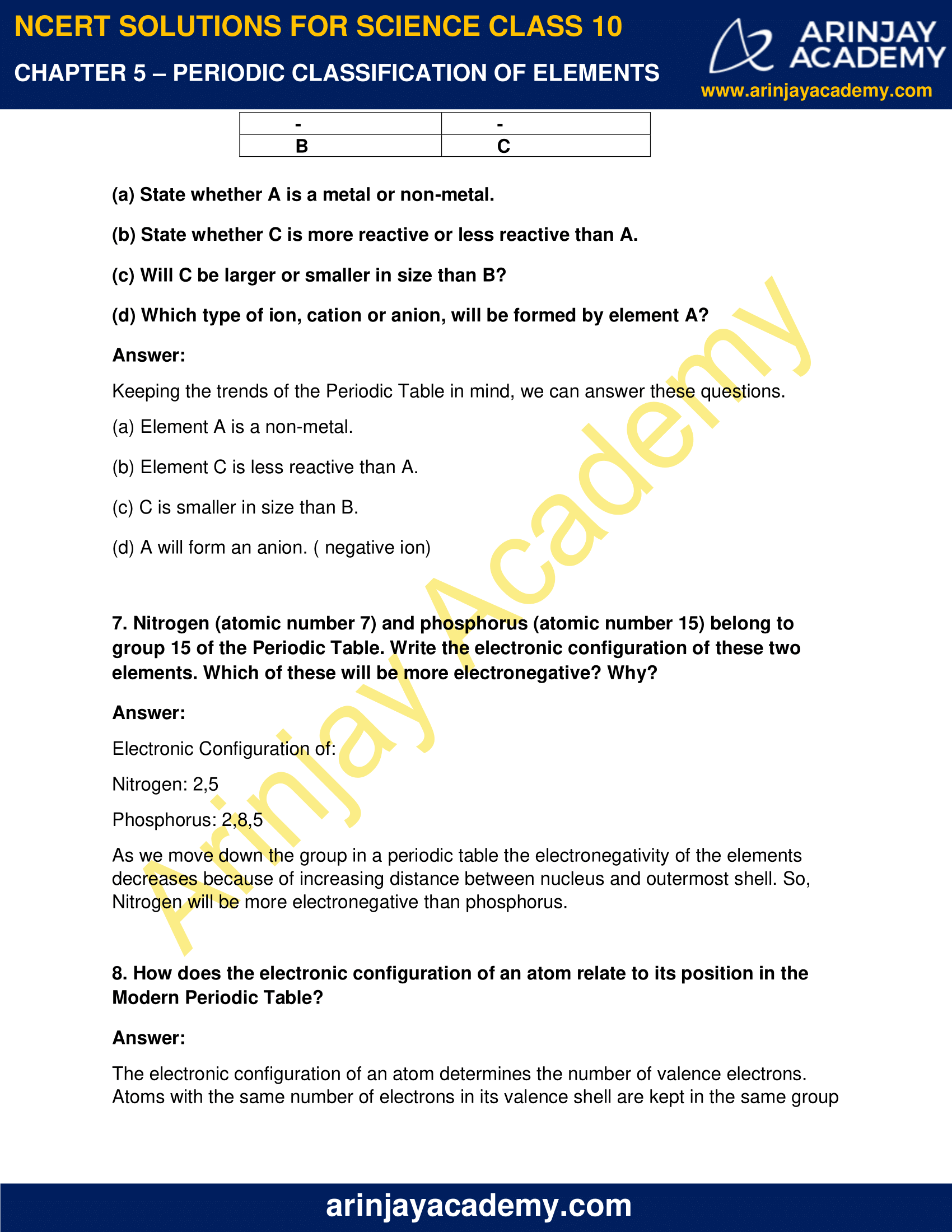 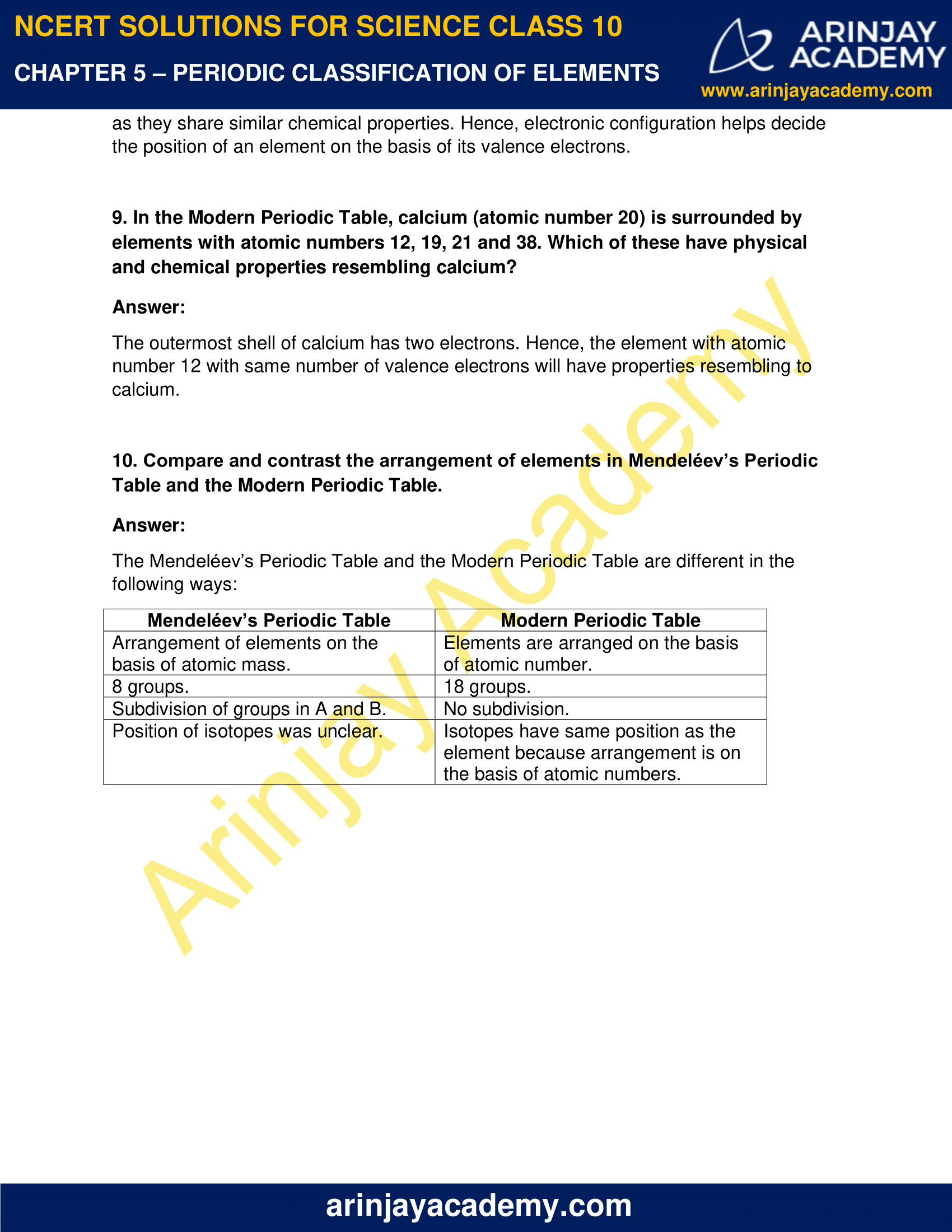 1. Did Döbereiner’s triads also exist in the columns of Newlands’ Octaves? Compare and find out.

2. What were the limitations of Döbereiner’s classification?

The Döbereiner’s classification had limitations because:

3. What were the limitations of Newlands’ Law of Octaves?

Newland assumed that there are only 56 elements in nature and did not consider discovery of new elements. The law is such that it is applicable only for elements till Calcium. It fits two elements in same slot and many elements with differing properties in same columns. For example, Iron (Fe) was placed far away from elements like Nickel and Cobalt, that share its properties.

1. Use Mendeléev’s Periodic Table to predict the formulae for the oxides of the following elements:

In Mendeléev’s Periodic Table, Oxygen is a member of group VI A making its valency two. According to the table, the formula for oxides of:

2. Besides gallium, which other elements have since been discovered that were left by Mendeléev in his Periodic Table? (any two)

Besides gallium, Germanium and Scandium were also the elements that were later discovered and were left by Mendeléev in his Periodic Table.

3. What were the criteria used by Mendeléev in creating his Periodic Table?

Mendeléev used the following criteria to sort elements in his Periodic Table:

4. Why do you think the noble gases are placed in a separate group?

Noble gases are placed in group zero. Due to their inert nature, they don’t react with other elements easily. Their concentration in our atmosphere is also low. In order to distinguish them and maintain the order of periodic table, they are placed in a separate group.

The Modern Periodic Table removes the anomalies of Mendeléev’s Periodic Table by arranging the elements on the basis of atomic numbers. Since Mendeléev arranged his periodic table on the basis of atomic mass, the anomaly due to elements with same atomic mass are removed. The isotopes of same elements with different atomic masses are assigned with a fixed position in the modern periodic table. Also, atomic number of cobalt is 27 and nickel is 28, cobalt will come before nickel even though its atomic mass is greater.

2. Name two elements you would expect to show chemical reactions similar to magnesium. What is the basis for your choice?

(a) three elements that have a single electron in their outermost shells.

(b) two elements that have two electrons in their outermost shells.

4. (a) Lithium, sodium, potassium are all metals that react with water to liberate hydrogen gas. Is there any similarity in the atoms of these elements?

(b) Helium is an unreactive gas and neon is a gas of extremely low reactivity. What, if anything, do their atoms have in common?

(a) Lithium, sodium and potassium are all alkali metals. They have only one electron in their outermost shell. This makes them highly unstable. They readily lose this electron and react with water to liberate hydrogen gas.

(b) Both helium and neon are noble gases. They have completely filled outermost electrons making them very stable and unreactive.

5. In the Modern Periodic Table, which are the metals among the first ten elements?

Lithium (Li) and Beryllium (Be) are the metals among the first ten elements in modern periodic table.

6. By considering their position in the Periodic Table, which one of the following elements would you expect to have maximum metallic characteristic?

Ga Ge As Se Be

In the given elements, Gallium and Beryllium have the maximum metallic characteristics. However, Gallium (Ga) has a larger size than beryllium so it loses its outermost electrons more easily making it the most metallic among the given compounds.

1. Which of the following statements is not a correct statement about the trends when going from left to right across the periods of periodic Table.

(a) The elements become less metallic in nature.

(b) The number of valence electrons increases.

We can say that this statement is incorrect because on moving left to right, the non-metallic character increases in elements. It becomes harder to lose electrons.

2. Element X forms a chloride with the formula XCl2 , which is a solid with a high melting point. X would most likely be in the same group of the Periodic Table as

4. (a) What property do all elements in the same column of the Periodic Table as boron have in common?

(b)What property do all elements in the same column of the Periodic Table as fluorine have in common?

(a) All the elements in the same column of the Periodic table as boron have the same valency of 3.

(b) All the elements in the same column of the Periodic table as fluorine have the same valency of 1. They gain one electron to complete their octet.

(a) What is the atomic number of this element?

(b) To which of the following elements would it be chemically similar? (Atomic numbers are given in parentheses.)

Hence, the atomic number of this element is 17.

(b) Electronic configuration of:

Since Fluorine has the same number of valence electrons in its outermost shell as the given element, it would be chemically similar to it.

6. The position of three elements A, B and C in the Periodic Table are shown below – 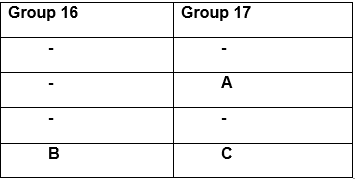 (a) State whether A is a metal or non-metal.

(b) State whether C is more reactive or less reactive than A.

(c) Will C be larger or smaller in size than B?

(d) Which type of ion, cation or anion, will be formed by element A?

Keeping the trends of the Periodic Table in mind, we can answer these questions.

(b) Element C is less reactive than A.

7. Nitrogen (atomic number 7) and phosphorus (atomic number 15) belong to group 15 of the Periodic Table. Write the electronic configuration of these two elements. Which of these will be more electronegative? Why?

As we move down the group in a periodic table the electronegativity of the elements decreases because of increasing distance between nucleus and outermost shell. So, Nitrogen will be more electronegative than phosphorus.

8. How does the electronic configuration of an atom relate to its position in the Modern Periodic Table?

9. In the Modern Periodic Table, calcium (atomic number 20) is surrounded by elements with atomic numbers 12, 19, 21 and 38. Which of these have physical and chemical properties resembling calcium?

The outermost shell of calcium has two electrons. Hence, the element with atomic number 12 with same number of valence electrons will have properties resembling to calcium.