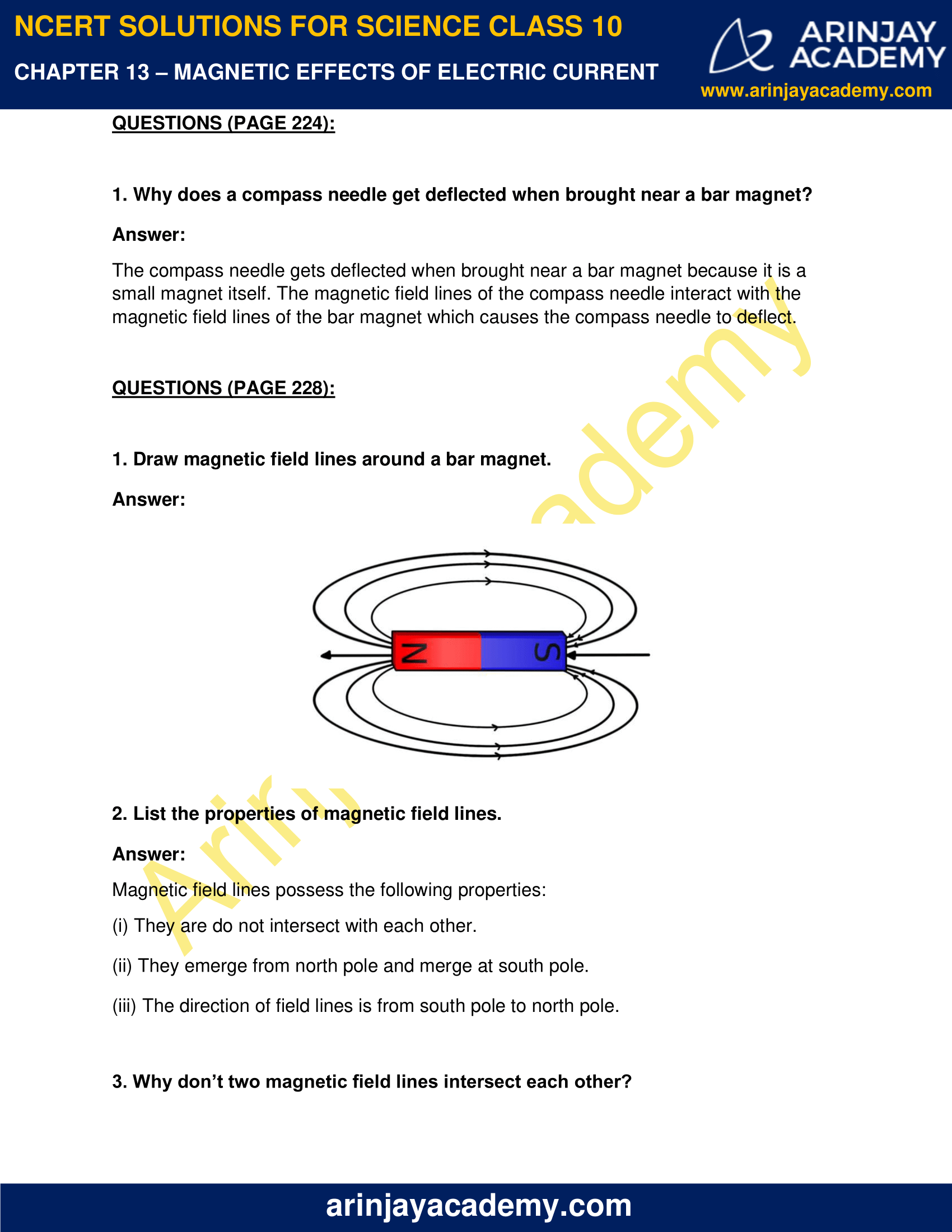 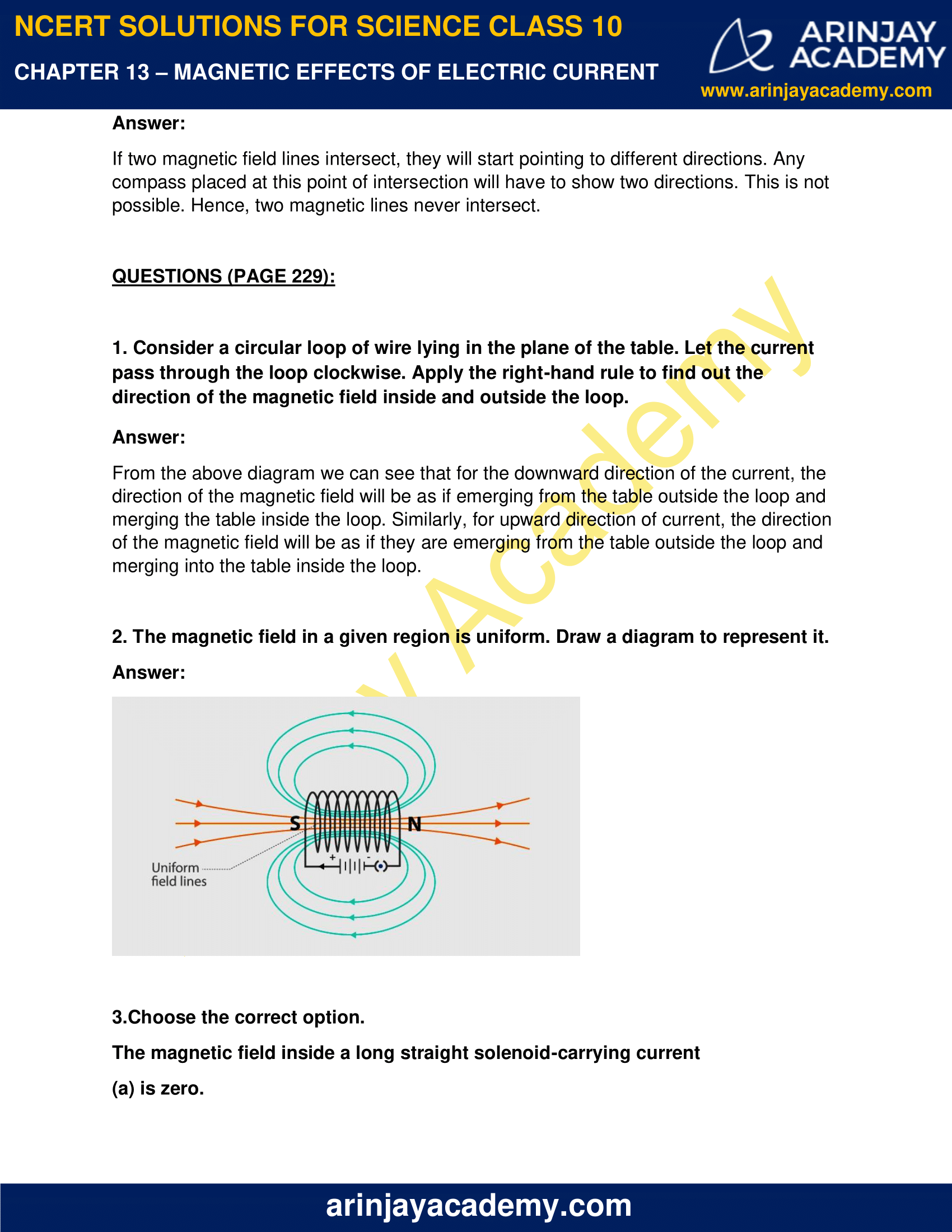 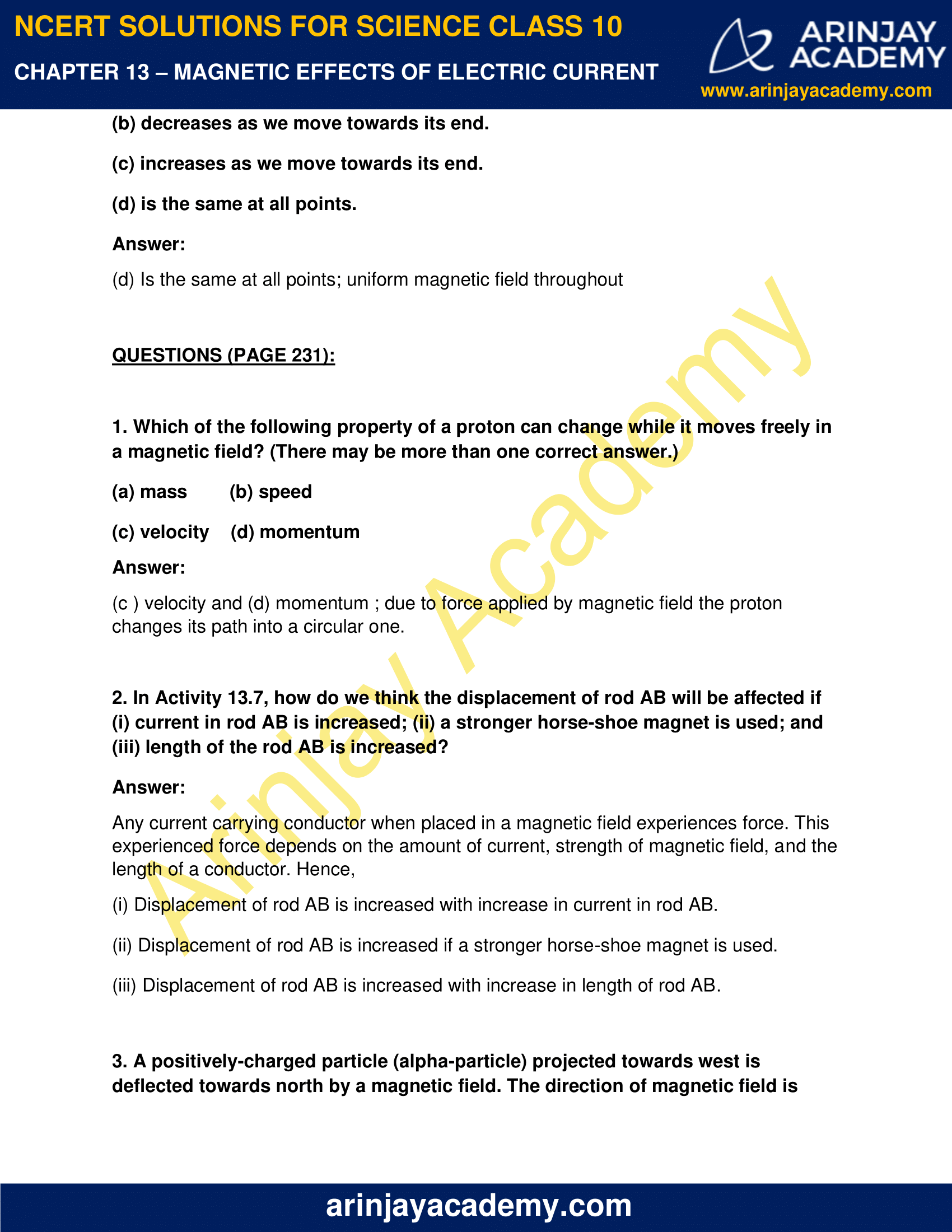 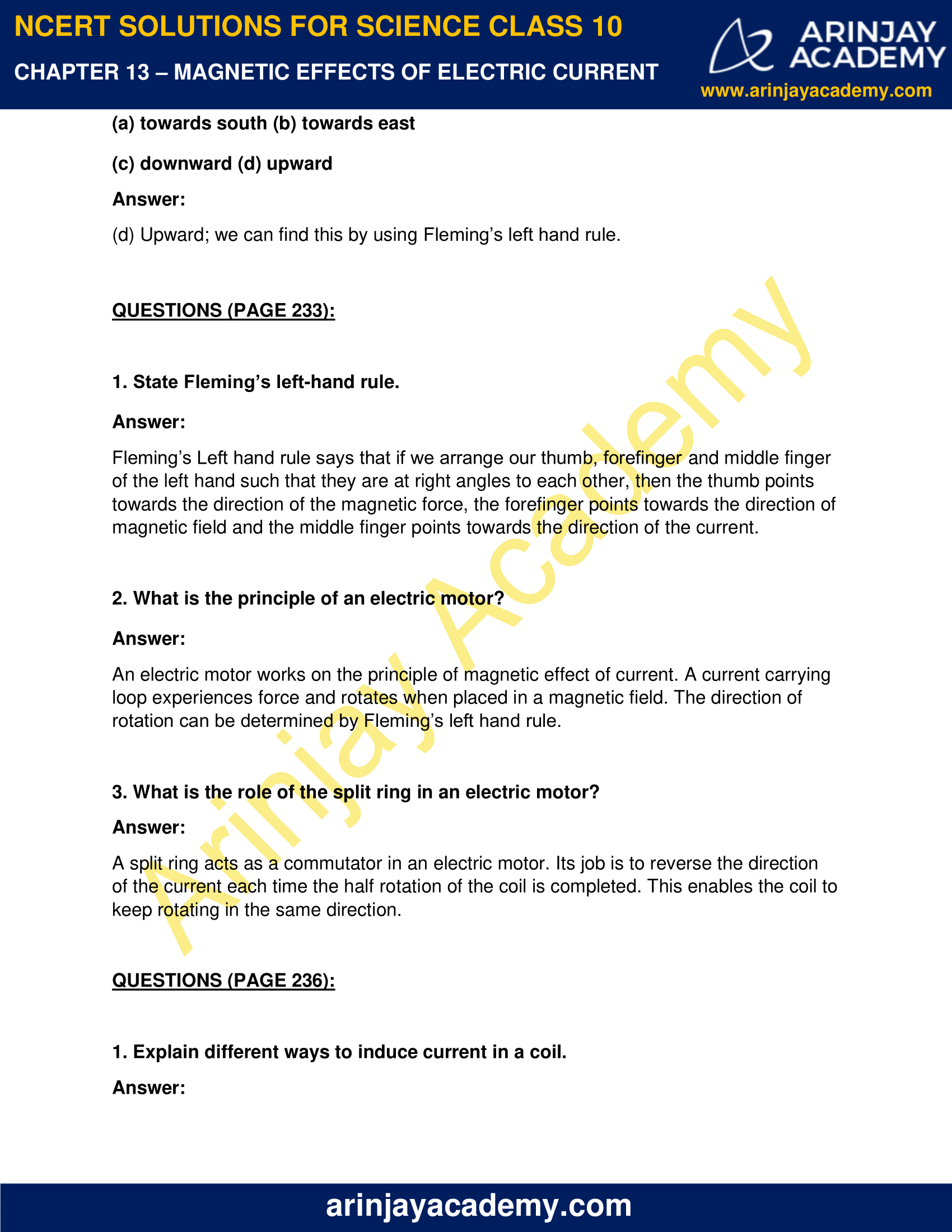 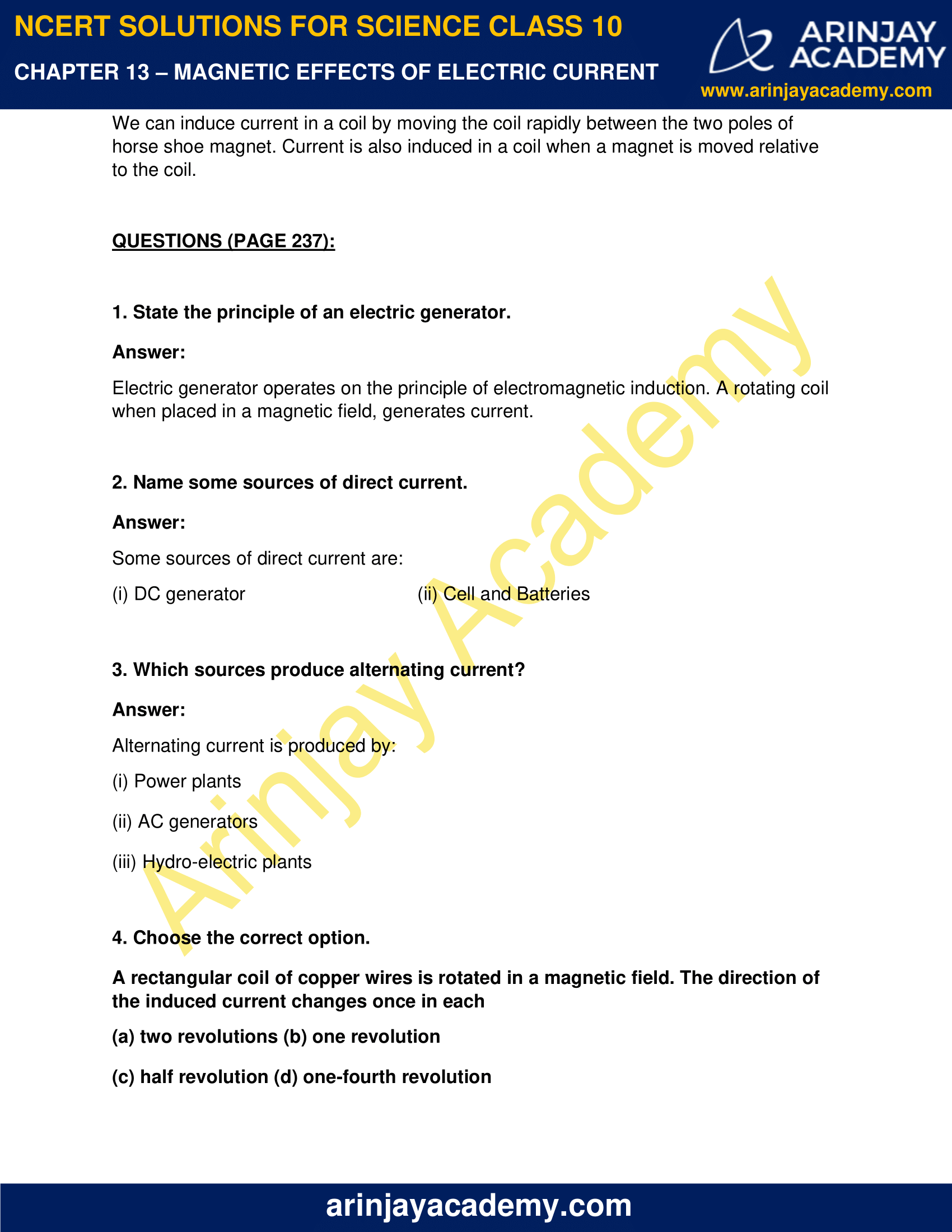 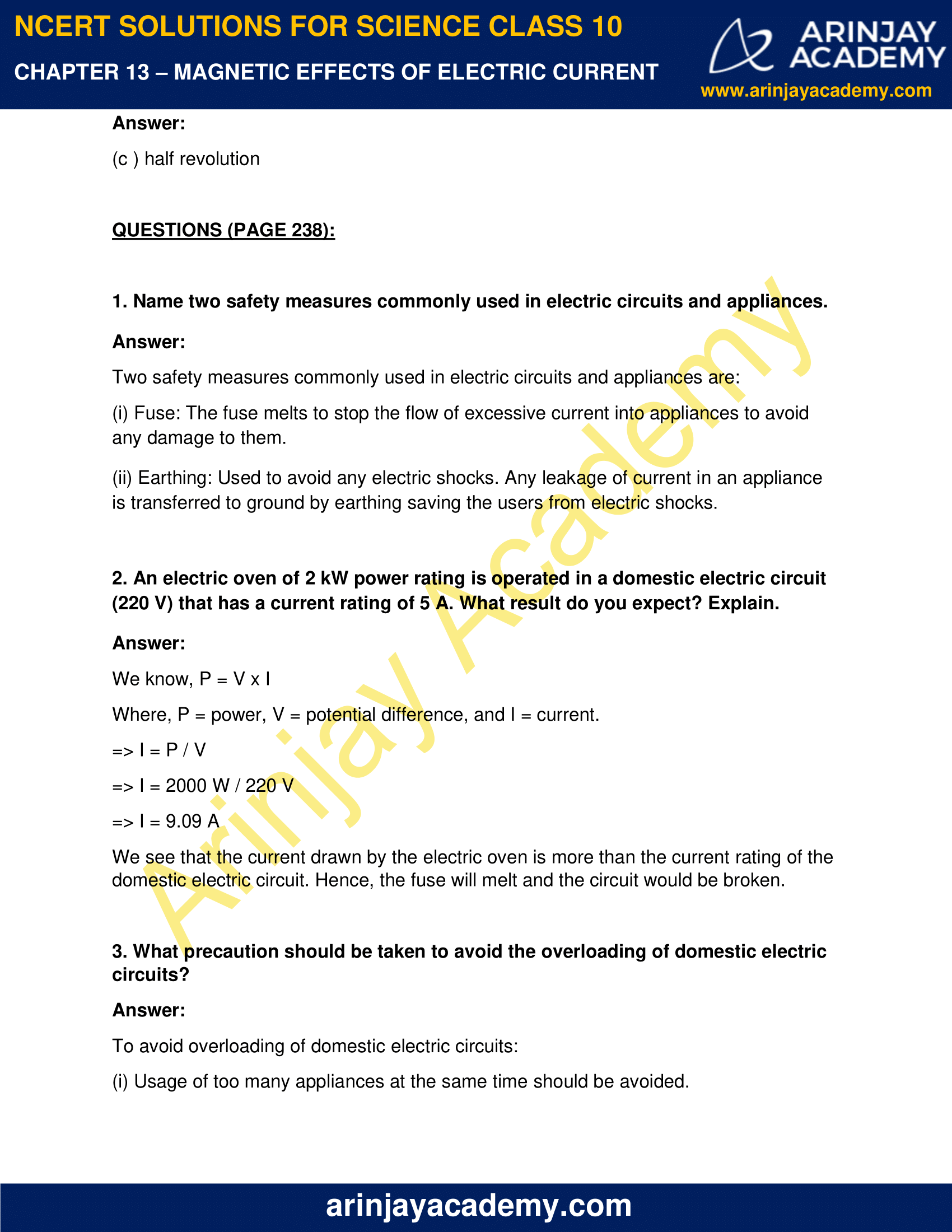 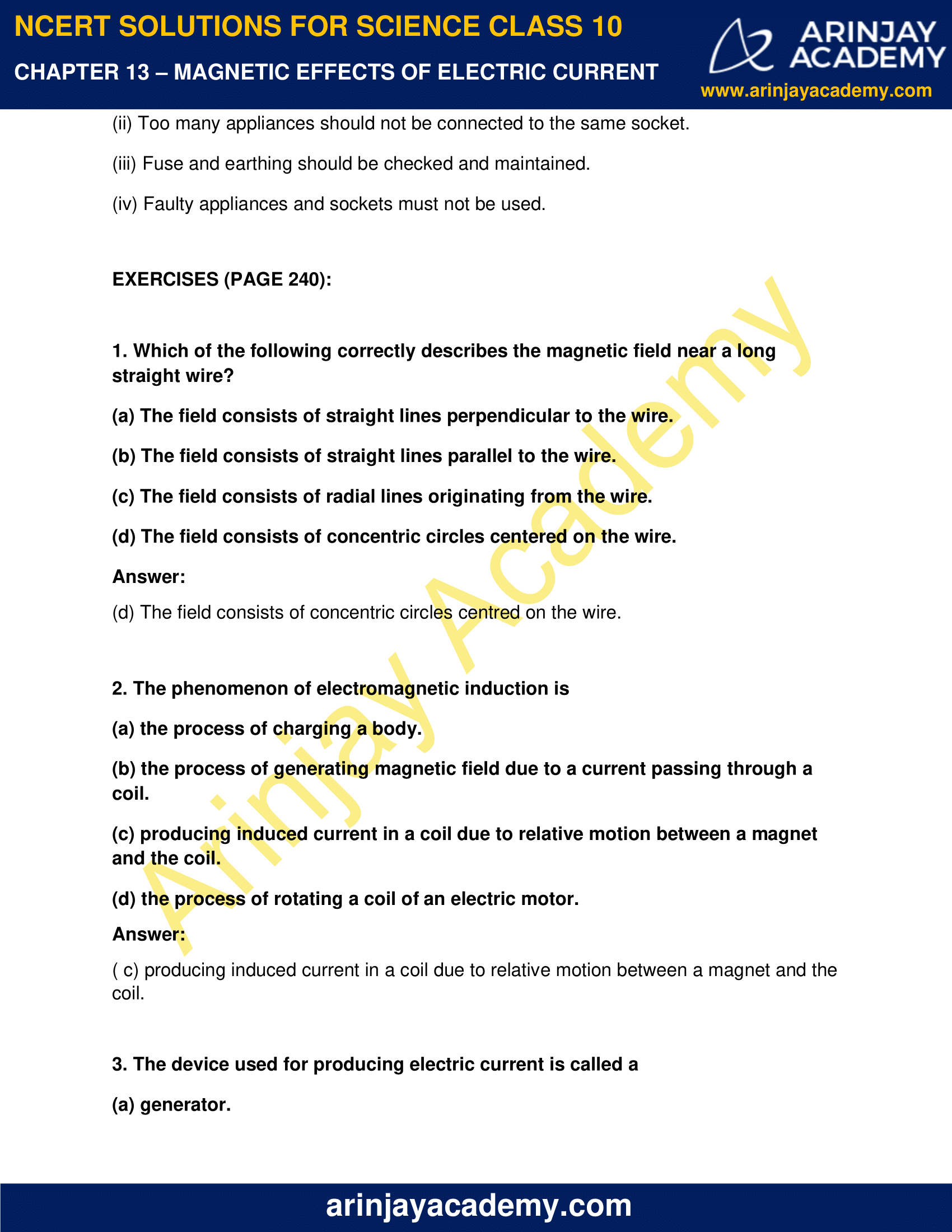 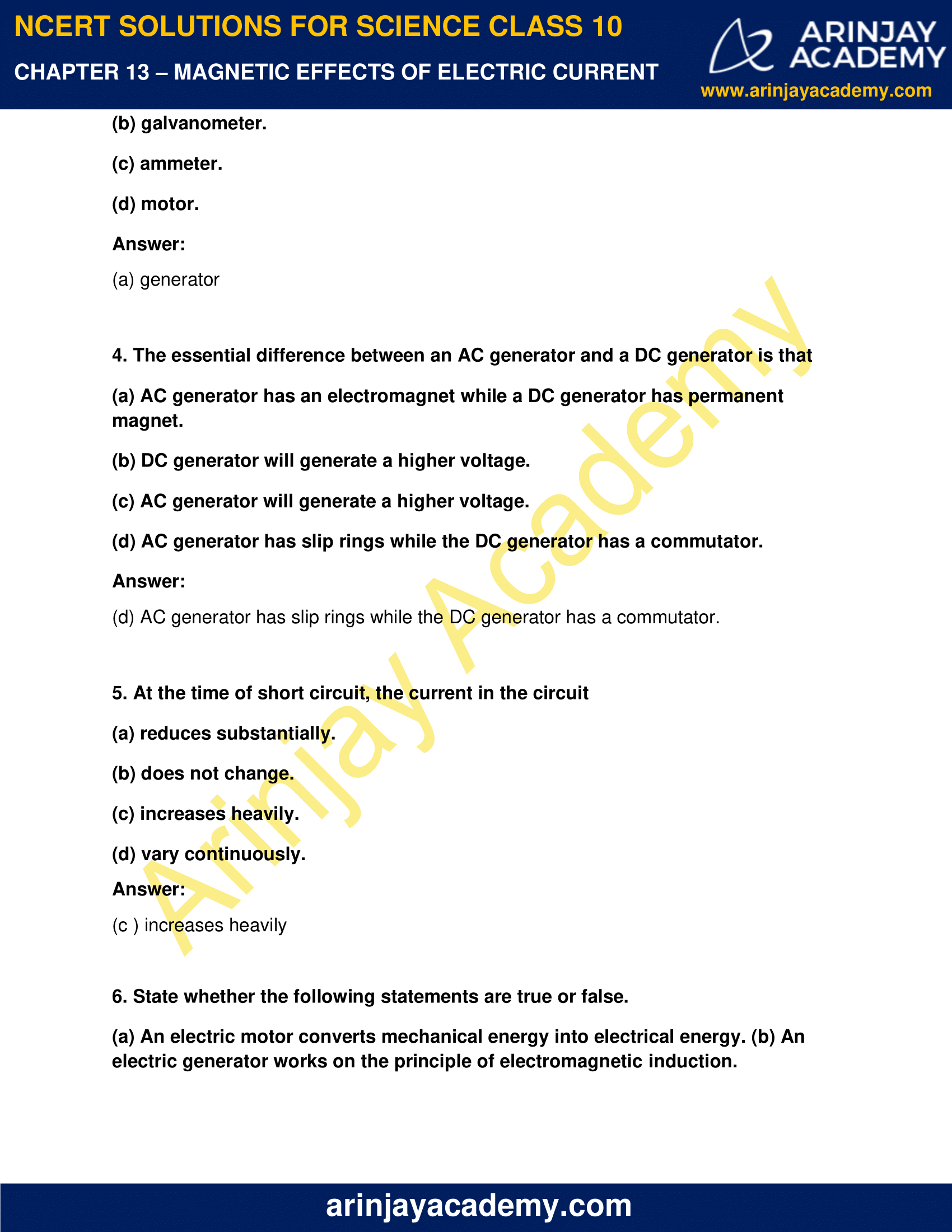 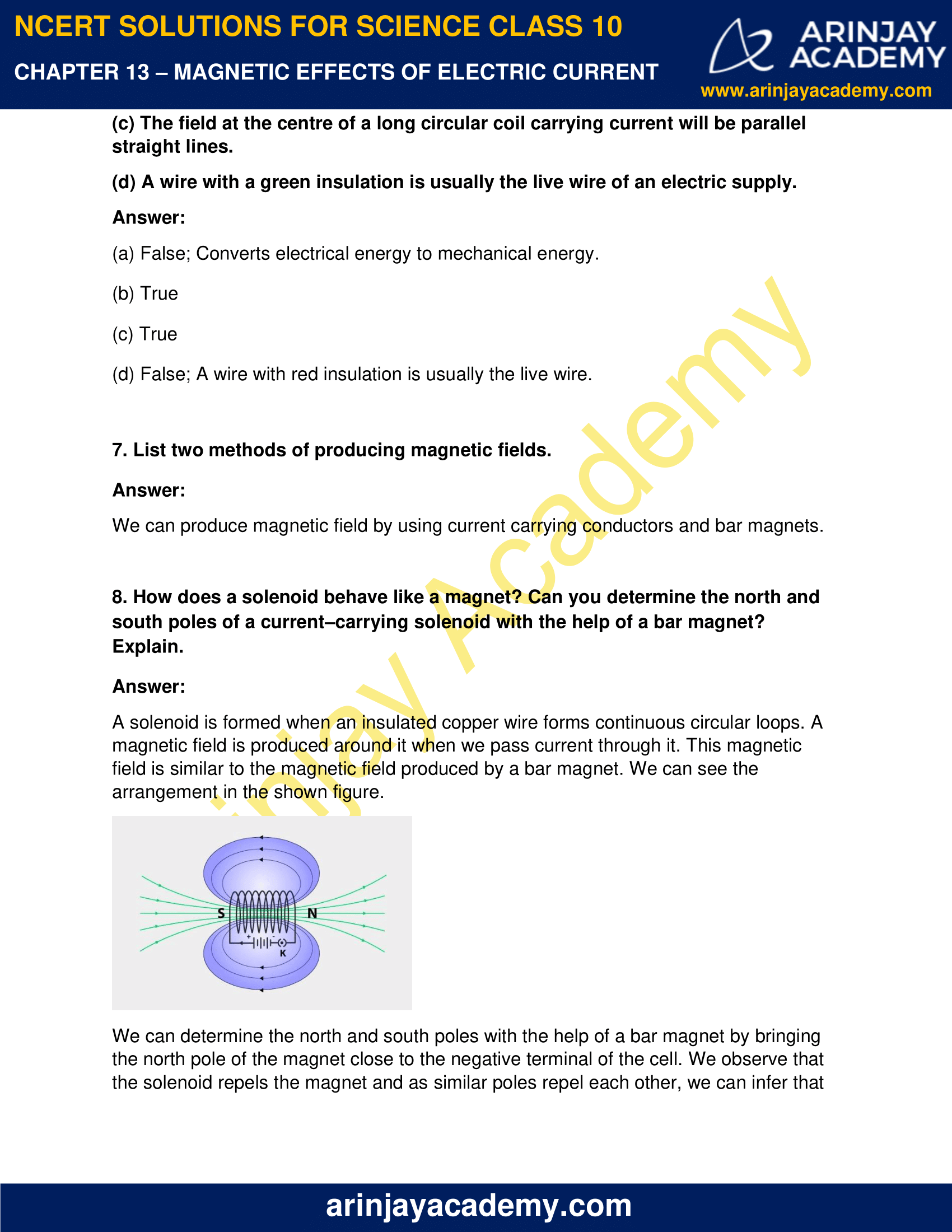 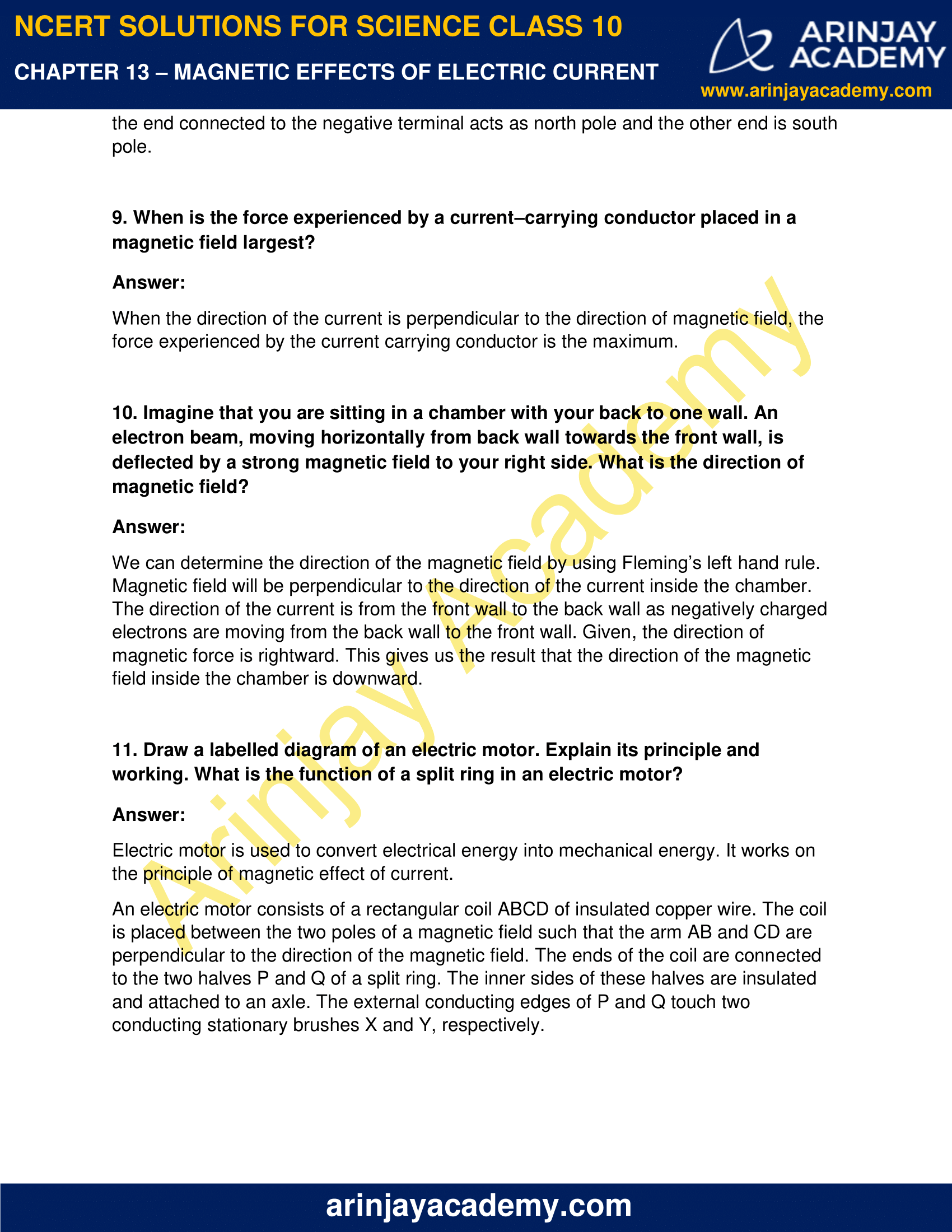 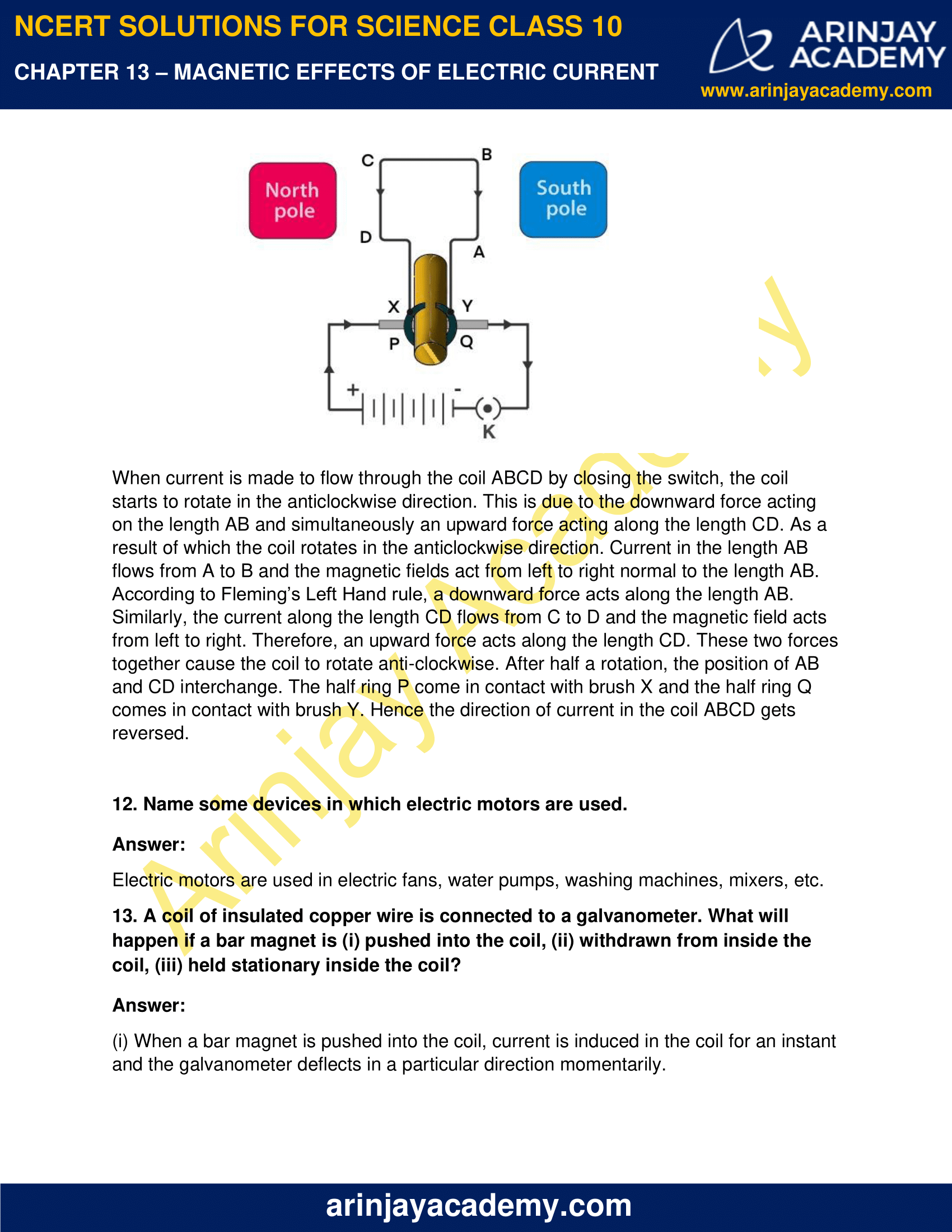 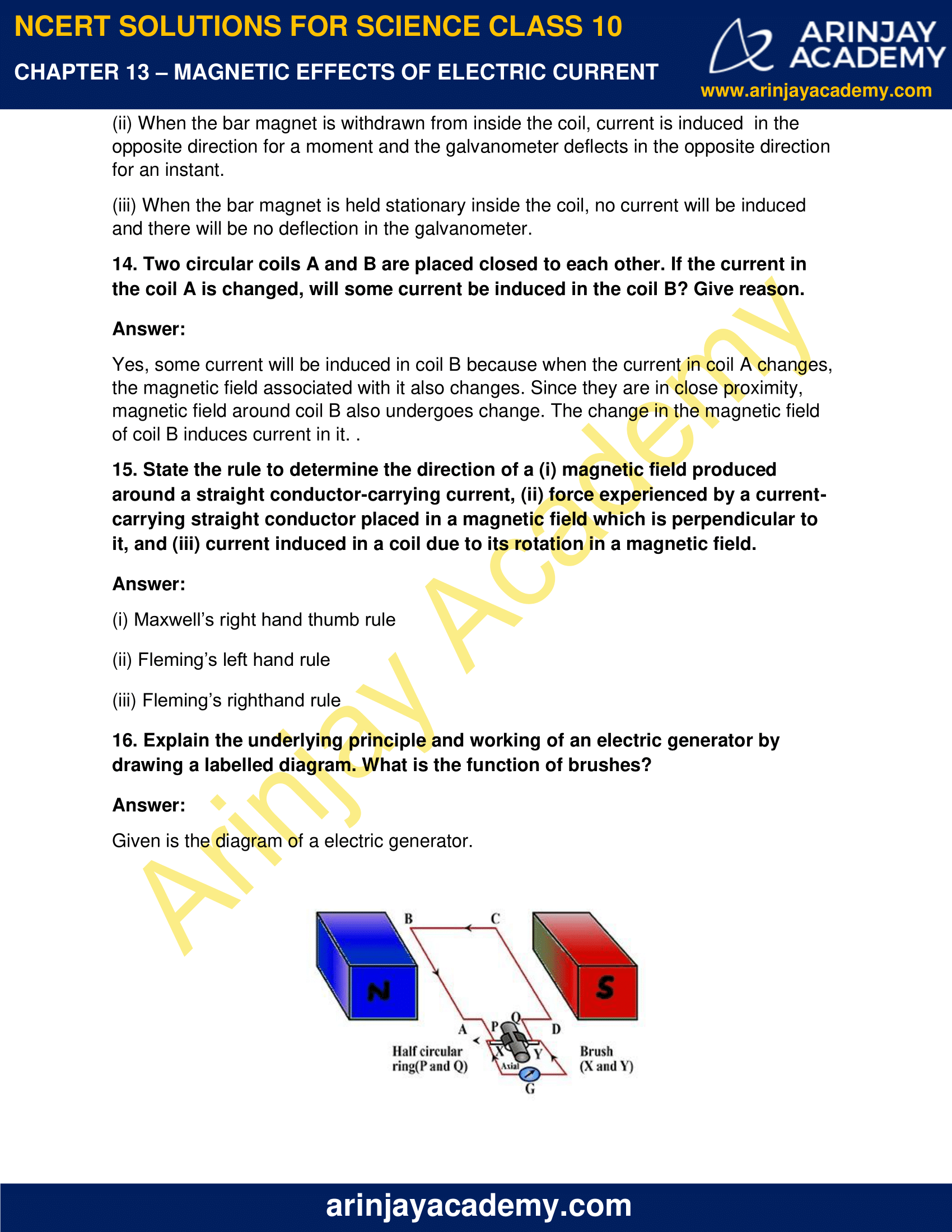 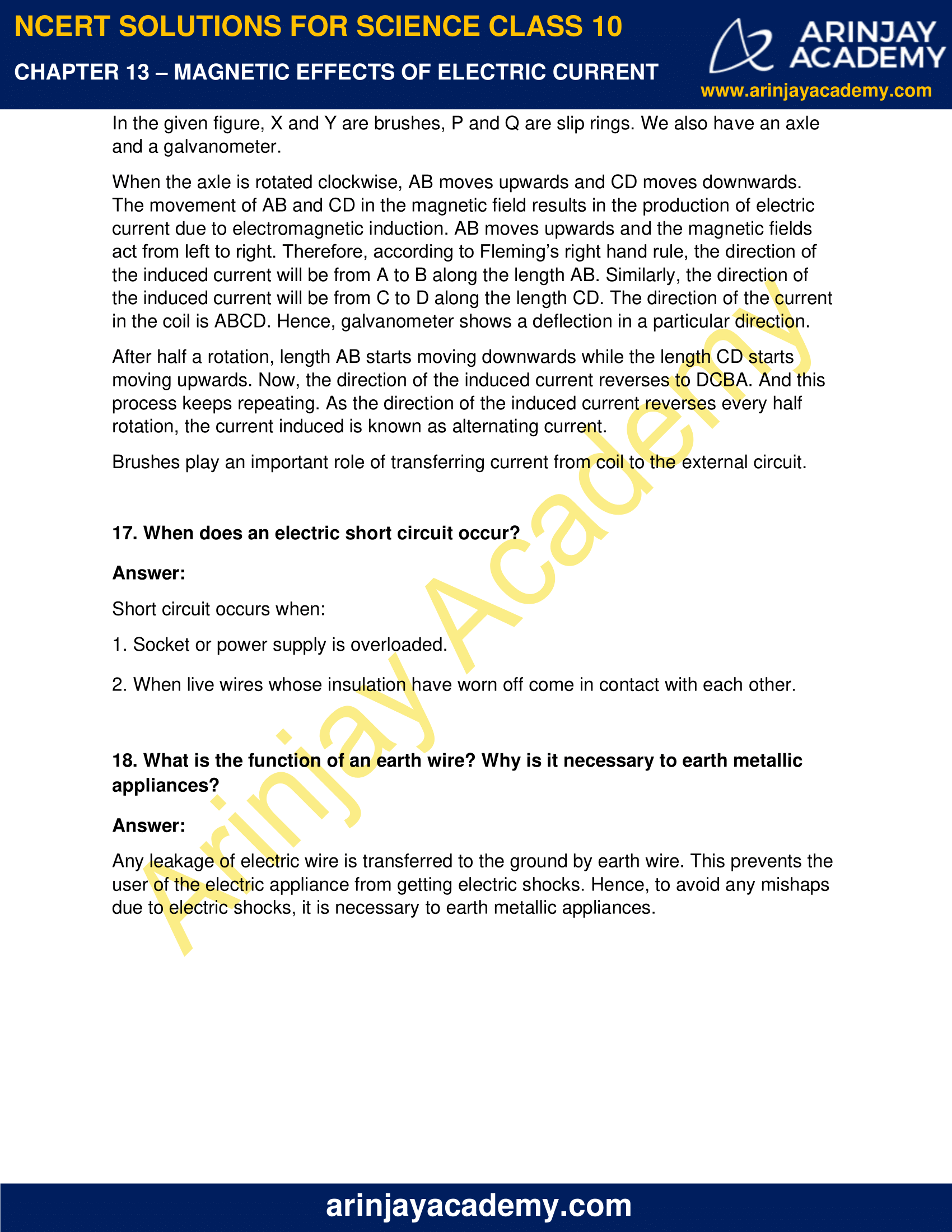 1. Why does a compass needle get deflected when brought near a bar magnet? 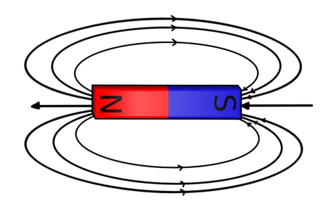 3. Why don’t two magnetic field lines intersect each other?

If two magnetic field lines intersect, they will start pointing to different directions. Any compass placed at this point of intersection will have to show two directions. This is not possible. Hence, two magnetic lines never intersect.

1. Consider a circular loop of wire lying in the plane of the table. Let the current pass through the loop clockwise. Apply the right-hand rule to find out the direction of the magnetic field inside and outside the loop.

2. The magnetic field in a given region is uniform. Draw a diagram to represent it. 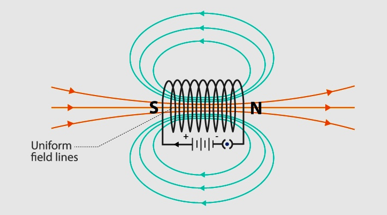 The magnetic field inside a long straight solenoid-carrying current

(b) decreases as we move towards its end.

(c) increases as we move towards its end.

(d) is the same at all points.

(d) Is the same at all points; uniform magnetic field throughout

1. Which of the following property of a proton can change while it moves freely in a magnetic field? (There may be more than one correct answer.)

(c ) velocity and (d) momentum ; due to force applied by magnetic field the proton changes its path into a circular one.

Any current carrying conductor when placed in a magnetic field experiences force. This experienced force depends on the amount of current, strength of magnetic field, and the length of a conductor. Hence,

(a) towards south
(b) towards east
(c) downward
(d) upward

(d) Upward; we can find this by using Fleming’s left hand rule.

2. What is the principle of an electric motor?

An electric motor works on the principle of magnetic effect of current. A current carrying loop experiences force and rotates when placed in a magnetic field. The direction of rotation can be determined by Fleming’s left hand rule.

3. What is the role of the split ring in an electric motor?

A split ring acts as a commutator in an electric motor. Its job is to reverse the direction of the current each time the half rotation of the coil is completed. This enables the coil to keep rotating in the same direction.

1. Explain different ways to induce current in a coil.

We can induce current in a coil by moving the coil rapidly between the two poles of horse shoe magnet. Current is also induced in a coil when a magnet is moved relative to the coil.

1. State the principle of an electric generator.

Electric generator operates on the principle of electromagnetic induction. A rotating coil when placed in a magnetic field, generates current.

2. Name some sources of direct current.

Some sources of direct current are:

Alternating current is produced by:

A rectangular coil of copper wires is rotated in a magnetic field. The direction of the induced current changes once in each

(i) Fuse: The fuse melts to stop the flow of excessive current into appliances to avoid any damage to them.

2. An electric oven of 2 kW power rating is operated in a domestic electric circuit (220 V) that has a current rating of 5 A. What result do you expect? Explain.

Where, P = power, V = potential difference, and I = current.

We see that the current drawn by the electric oven is more than the current rating of the domestic electric circuit. Hence, the fuse will melt and the circuit would be broken.

3. What precaution should be taken to avoid the overloading of domestic electric circuits?

(i) Usage of too many appliances at the same time should be avoided.

(ii) Too many appliances should not be connected to the same socket.

(iii) Fuse and earthing should be checked and maintained.

(iv) Faulty appliances and sockets must not be used.

1. Which of the following correctly describes the magnetic field near a long straight wire?

a) The field consists of straight lines perpendicular to the wire.

b) The field consists of straight lines parallel to the wire.

c) The field consists of radial lines originating from the wire.

d) The field consists of concentric circles centered on the wire.

(d) The field consists of concentric circles centred on the wire.

2. The phenomenon of electromagnetic induction is

(a) the process of charging a body.

(b) the process of generating magnetic field due to a current passing through a coil.

(c) producing induced current in a coil due to relative motion between a magnet and the coil.

(d) the process of rotating a coil of an electric motor.

( c) producing induced current in a coil due to relative motion between a magnet and the coil.

3. The device used for producing electric current is called a

4. The essential difference between an AC generator and a DC generator is that

(b) DC generator will generate a higher voltage.

5. At the time of short circuit, the current in the circuit

(b) does not change.

6. State whether the following statements are true or false.

(a) An electric motor converts mechanical energy into electrical energy.

(b) An electric generator works on the principle of electromagnetic induction.

(c) The field at the centre of a long circular coil carrying current will be parallel straight lines.

(d) A wire with a green insulation is usually the live wire of an electric supply.

(d) False; A wire with red insulation is usually the live wire.

We can produce magnetic field by using current carrying conductors and bar magnets.

8. How does a solenoid behave like a magnet? Can you determine the north and south poles of a current–carrying solenoid with the help of a bar magnet? Explain. 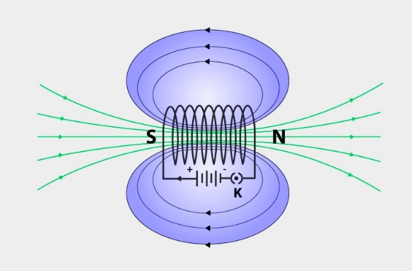 We can determine the north and south poles with the help of a bar magnet by bringing the north pole of the magnet close to the negative terminal of the cell. We observe that the solenoid repels the magnet and as similar poles repel each other, we can infer that the end connected to the negative terminal acts as north pole and the other end is south pole.

9. When is the force experienced by a current–carrying conductor placed in a magnetic field largest?

10. Imagine that you are sitting in a chamber with your back to one wall. An electron beam, moving horizontally from back wall towards the front wall, is deflected by a strong magnetic field to your right side. What is the direction of magnetic field?

Electric motor is used to convert electrical energy into mechanical energy. It works on the principle of magnetic effect of current.

An electric motor consists of a rectangular coil ABCD of insulated copper wire. The coil is placed between the two poles of a magnetic field such that the arm AB and CD are perpendicular to the direction of the magnetic field. The ends of the coil are connected to the two halves P and Q of a split ring. The inner sides of these halves are insulated and attached to an axle. The external conducting edges of P and Q touch two conducting stationary brushes X and Y, respectively. 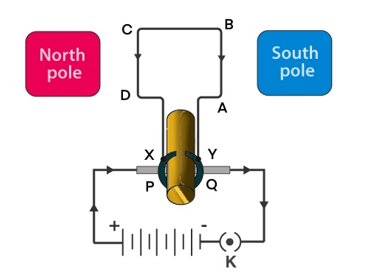 12. Name some devices in which electric motors are used.

(i) When a bar magnet is pushed into the coil, current is induced in the coil for an instant and the galvanometer deflects in a particular direction momentarily.

(iii) When the bar magnet is held stationary inside the coil, no current will be induced and there will be no deflection in the galvanometer.

14. Two circular coils A and B are placed closed to each other. If the current in the coil A is changed, will some current be induced in the coil B? Give reason.

16. Explain the underlying principle and working of an electric generator by drawing a labelled diagram. What is the function of brushes?

Given is the diagram of a electric generator. 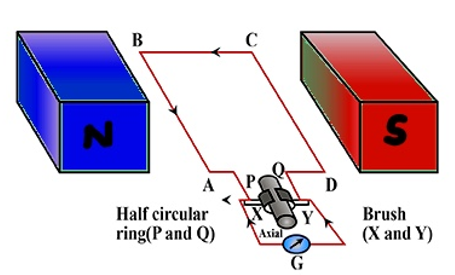 In the given figure, X and Y are brushes, P and Q are slip rings. We also have an axle and a galvanometer.

When the axle is rotated clockwise, AB moves upwards and CD moves downwards. The movement of AB and CD in the magnetic field results in the production of electric current due to electromagnetic induction. AB moves upwards and the magnetic fields act from left to right. Therefore, according to Fleming’s right hand rule, the direction of the induced current will be from A to B along the length AB. Similarly, the direction of the induced current will be from C to D along the length CD. The direction of the current in the coil is ABCD. Hence, galvanometer shows a deflection in a particular direction.

Brushes play an important role of transferring current from coil to the external circuit.

17. When does an electric short circuit occur?

18. What is the function of an earth wire? Why is it necessary to earth metallic appliances?

Any leakage of electric wire is transferred to the ground by earth wire. This prevents the user of the electric appliance from getting electric shocks. Hence, to avoid any mishaps due to electric shocks, it is necessary to earth metallic appliances.