NCERT Solutions for Class 10 Civics Chapter 7 – Outcomes of Democracy (Social Science), contains solutions to various questions in Exercise for Chapter 7.  At the end of the Solutions, all the keywords which are important to understand Chapter 7 Outcomes of Democracy Class 10 Civics, have been explained in a simple and easy to understand manner. We are providing NCERT Solutions for Class 10 all subjects which can be accessed by clicking here. 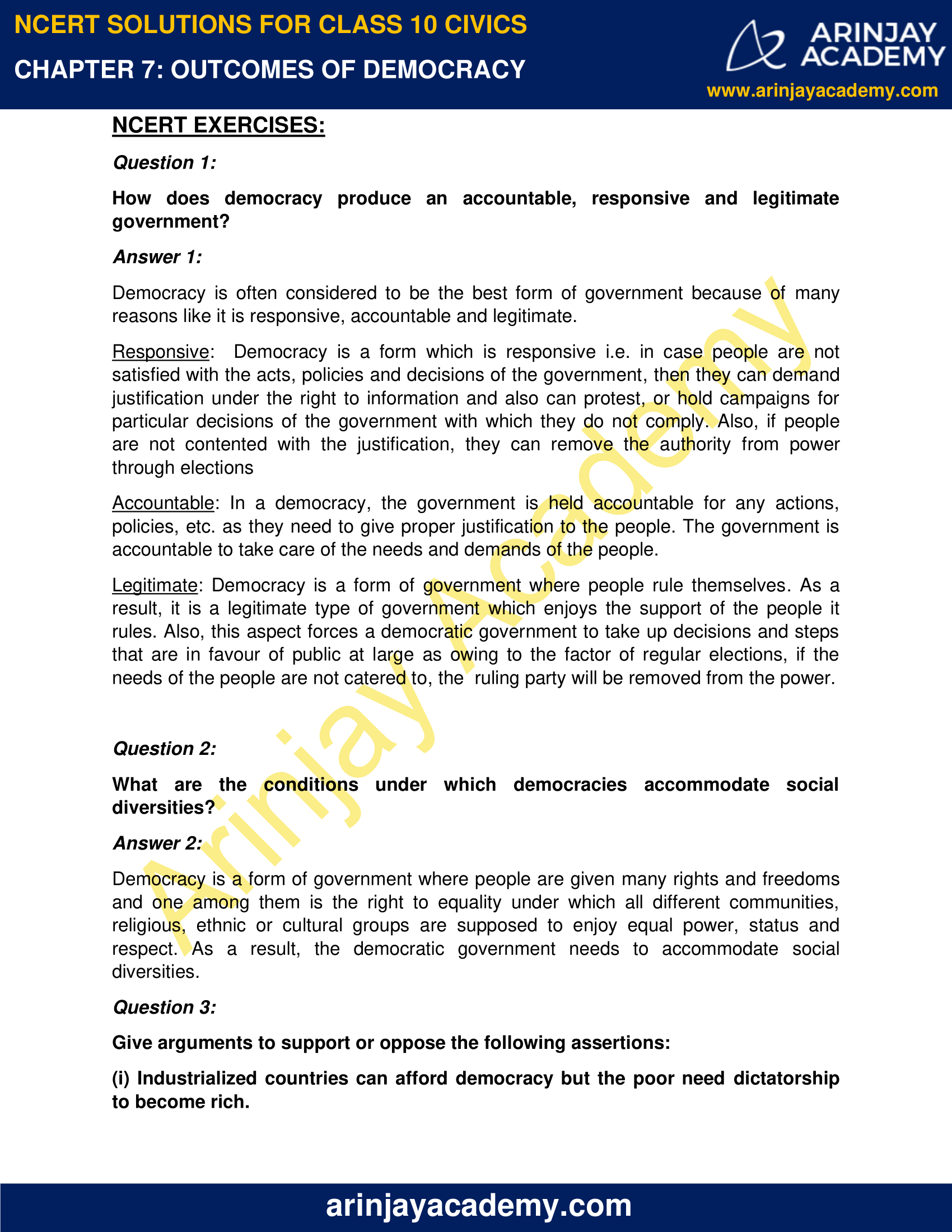 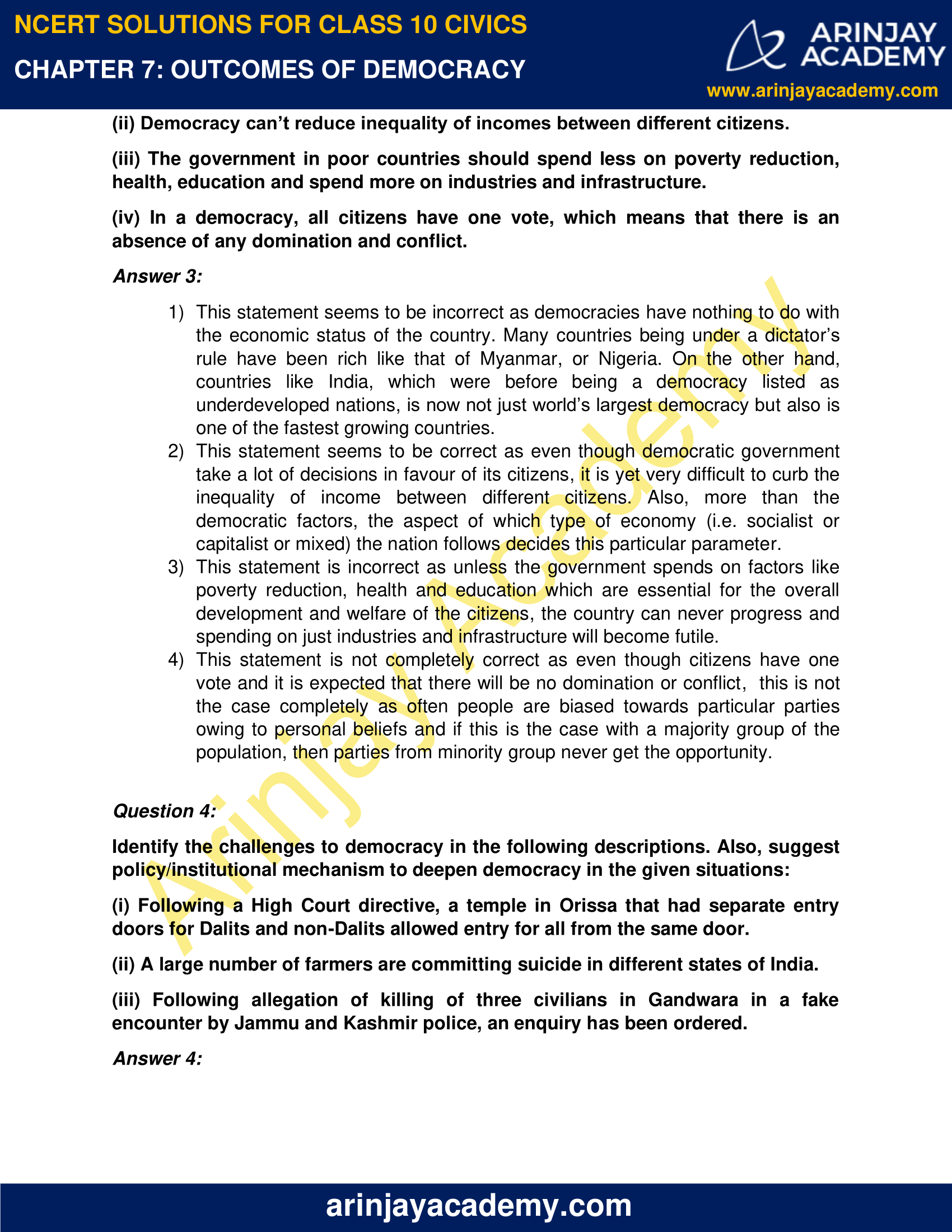 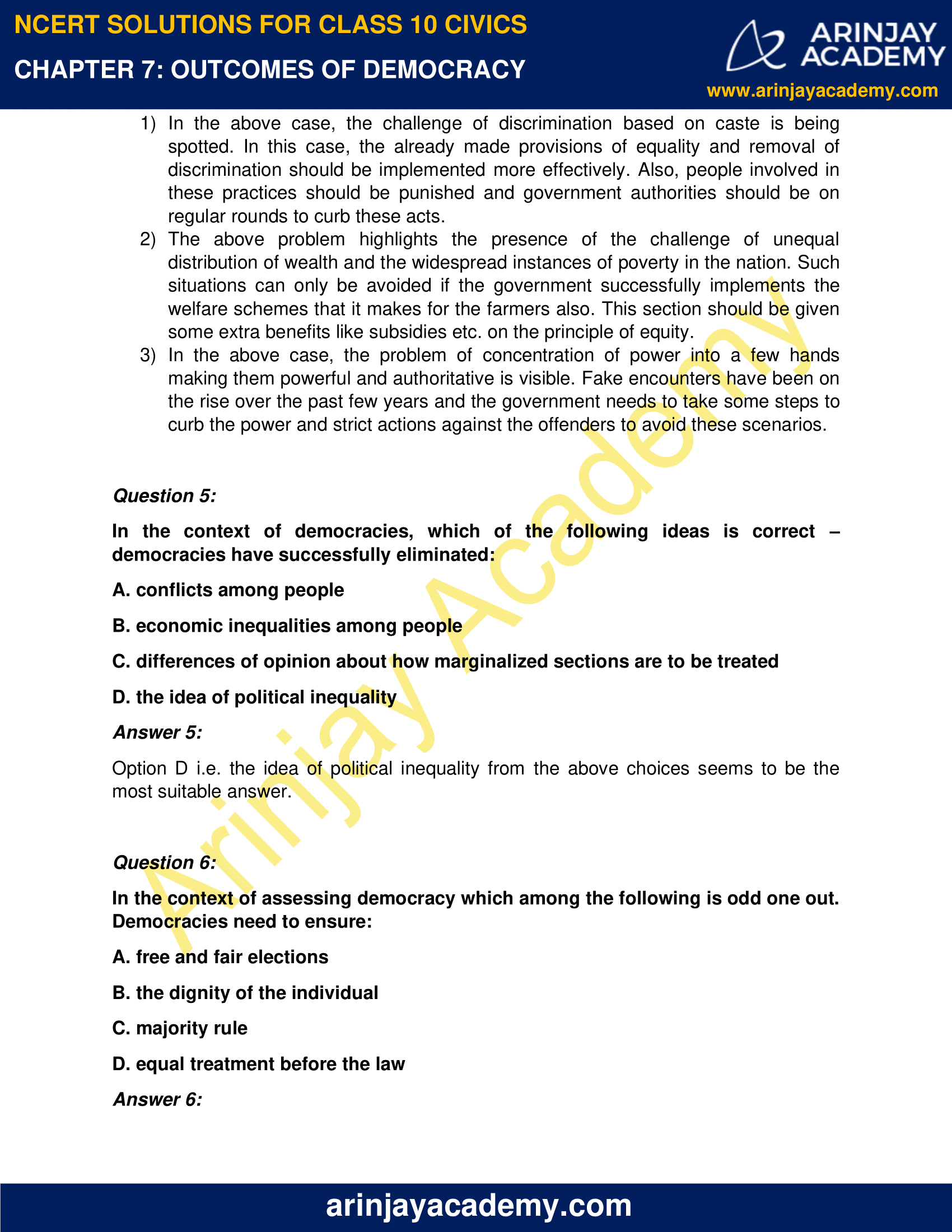 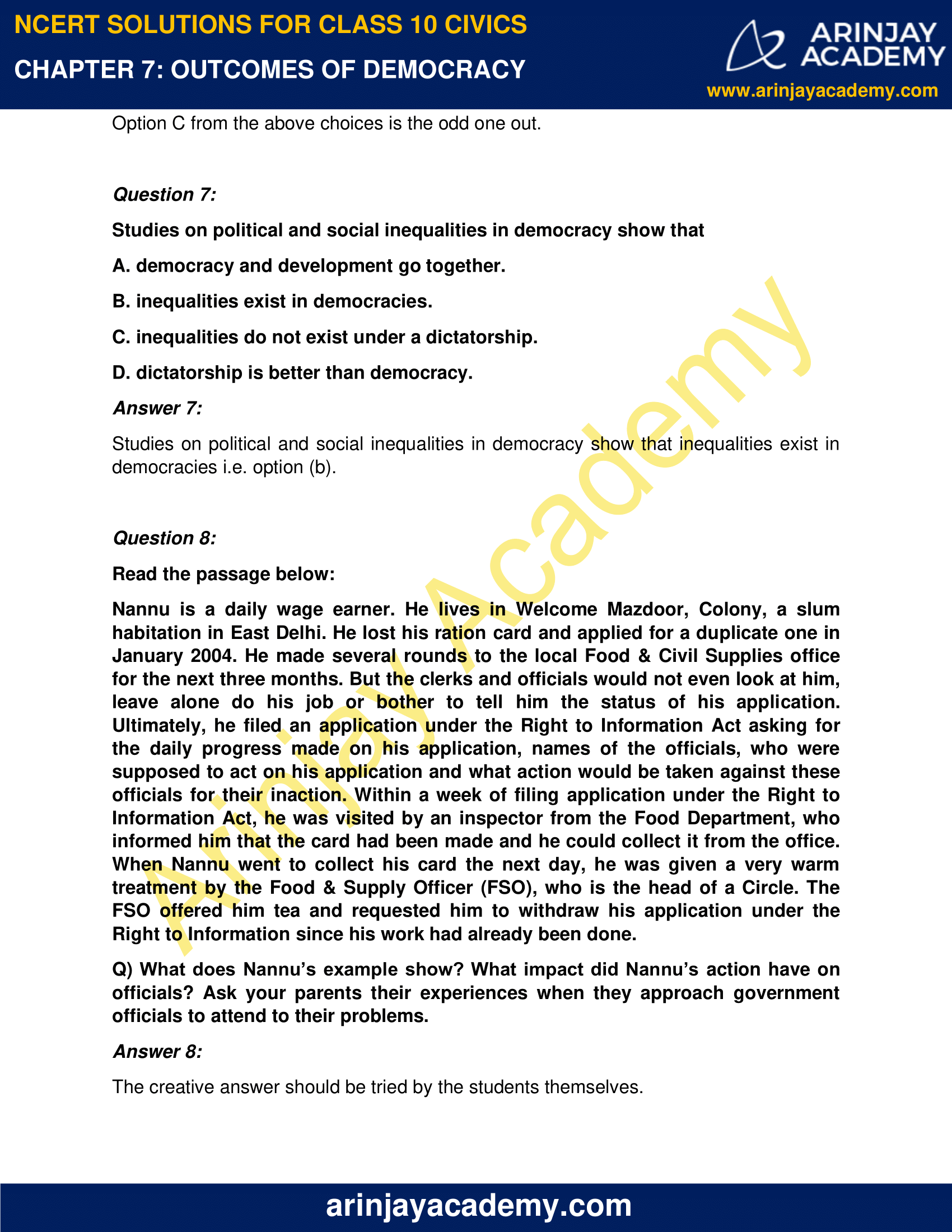 How does democracy produce an accountable, responsive and legitimate government?

Democracy is often considered to be the best form of government because of many reasons like it is responsive, accountable and legitimate.

Responsive:  Democracy is a form which is responsive i.e. in case people are not satisfied with the acts, policies and decisions of the government, then they can demand justification under the right to information and also can protest, or hold campaigns for particular decisions of the government with which they do not comply. Also, if people are not contented with the justification, they can remove the authority from power through elections

Legitimate: Democracy is a form of government where people rule themselves. As a result, it is a legitimate type of government which enjoys the support of the people it rules. Also, this aspect forces a democratic government to take up decisions and steps that are in favour of public at large as owing to the factor of regular elections, if the needs of the people are not catered to, the  ruling party will be removed from the power.

What are the conditions under which democracies accommodate social diversities?

Democracy is a form of government where people are given many rights and freedoms and one among them is the right to equality under which all different communities, religious, ethnic or cultural groups are supposed to enjoy equal power, status and respect. As a result, the democratic government needs to accommodate social diversities.

Give arguments to support or oppose the following assertions:

(i) Industrialized countries can afford democracy but the poor need dictatorship to become rich.

(iii) The government in poor countries should spend less on poverty reduction, health, education and spend more on industries and infrastructure.

(iv) In a democracy, all citizens have one vote, which means that there is an absence of any domination and conflict.

(i) This statement seems to be incorrect as democracies have nothing to do with the economic status of the country. Many countries being under a dictator’s rule have been rich like that of Myanmar, or Nigeria. On the other hand, countries like India, which were before being a democracy listed as underdeveloped nations, is now not just world’s largest democracy but also is one of the fastest growing countries.

(ii) This statement seems to be correct as even though democratic government take a lot of decisions in favour of its citizens, it is yet very difficult to curb the inequality of income between different citizens. Also, more than the democratic factors, the aspect of which type of economy (i.e. socialist or capitalist or mixed) the nation follows decides this particular parameter.

(iii) This statement is incorrect as unless the government spends on factors like poverty reduction, health and education which are essential for the overall development and welfare of the citizens, the country can never progress and spending on just industries and infrastructure will become futile.

(iv) This statement is not completely correct as even though citizens have one vote and it is expected that there will be no domination or conflict, this is not the case completely as often people are biased towards particular parties owing to personal beliefs and if this is the case with a majority group of the population, then parties from minority group never get the opportunity.

(i) Following a High Court directive, a temple in Orissa that had separate entry doors for Dalits and non-Dalits allowed entry for all from the same door.

(ii) A large number of farmers are committing suicide in different states of India.

(iii) Following allegation of killing of three civilians in Gandwara in a fake encounter by Jammu and Kashmir police, an enquiry has been ordered.

(ii) The above problem highlights the presence of the challenge of unequal distribution of wealth and the widespread instances of poverty in the nation. Such situations can only be avoided if the government successfully implements the welfare schemes that it makes for the farmers also. This section should be given some extra benefits like subsidies etc. on the principle of equity.

(iii) In the above case, the problem of concentration of power into a few hands making them powerful and authoritative is visible. Fake encounters have been on the rise over the past few years and the government needs to take some steps to curb the power and strict actions against the offenders to avoid these scenarios.

In the context of democracies, which of the following ideas is correct – democracies have successfully eliminated:

A. conflicts among people

B. economic inequalities among people

C. differences of opinion about how marginalized sections are to be treated

D. the idea of political inequality

Option D i.e. the idea of political inequality from the above choices seems to be the most suitable answer.

In the context of assessing democracy which among the following is odd one out. Democracies need to ensure:

A. free and fair elections

B. the dignity of the individual

D. equal treatment before the law

Option C from the above choices is the odd one out.

Studies on political and social inequalities in democracy show that

A. democracy and development go together.

B. inequalities exist in democracies.

C. inequalities do not exist under a dictatorship.

D. dictatorship is better than democracy.

Read the passage below:

Nannu is a daily wage earner. He lives in Welcome Mazdoor, Colony, a slum habitation in East Delhi. He lost his ration card and applied for a duplicate one in January 2004. He made several rounds to the local Food & Civil Supplies office for the next three months. But the clerks and officials would not even look at him, leave alone do his job or bother to tell him the status of his application. Ultimately, he filed an application under the Right to Information Act asking for the daily progress made on his application, names of the officials, who were supposed to act on his application and what action would be taken against these officials for their inaction. Within a week of filing application under the Right to Information Act, he was visited by an inspector from the Food Department, who informed him that the card had been made and he could collect it from the office. When Nannu went to collect his card the next day, he was given a very warm treatment by the Food & Supply Officer (FSO), who is the head of a Circle. The FSO offered him tea and requested him to withdraw his application under the Right to Information since his work had already been done.

Q) What does Nannu’s example show? What impact did Nannu’s action have on officials? Ask your parents their experiences when they approach government officials to attend to their problems.

The creative answer should be tried by the students themselves.

Corruption: It can be defined as untruthful or duplicitous conduct by those in power, typically involving bribery.

Dictatorship: It can be defined as a form of government which is authoritarian and the ruler is known as the dictator rules the state according to his whims and fancies.

Economic Disparity: It can be defined as the scenario of inequality in levels of income of the different citizens in a country.