NCERT Solutions for Class 10 Civics Chapter 5 – Popular Struggles and Movements (Social Science), contains solutions to various questions in Exercise for Chapter 5.  At the end of the Solutions, all the keywords which are important to understand Chapter 5 Popular Struggles and Movements Class 10 Civics, have been explained in a simple and easy to understand manner. We are providing NCERT Solutions for Class 10 all subjects which can be accessed by clicking here. 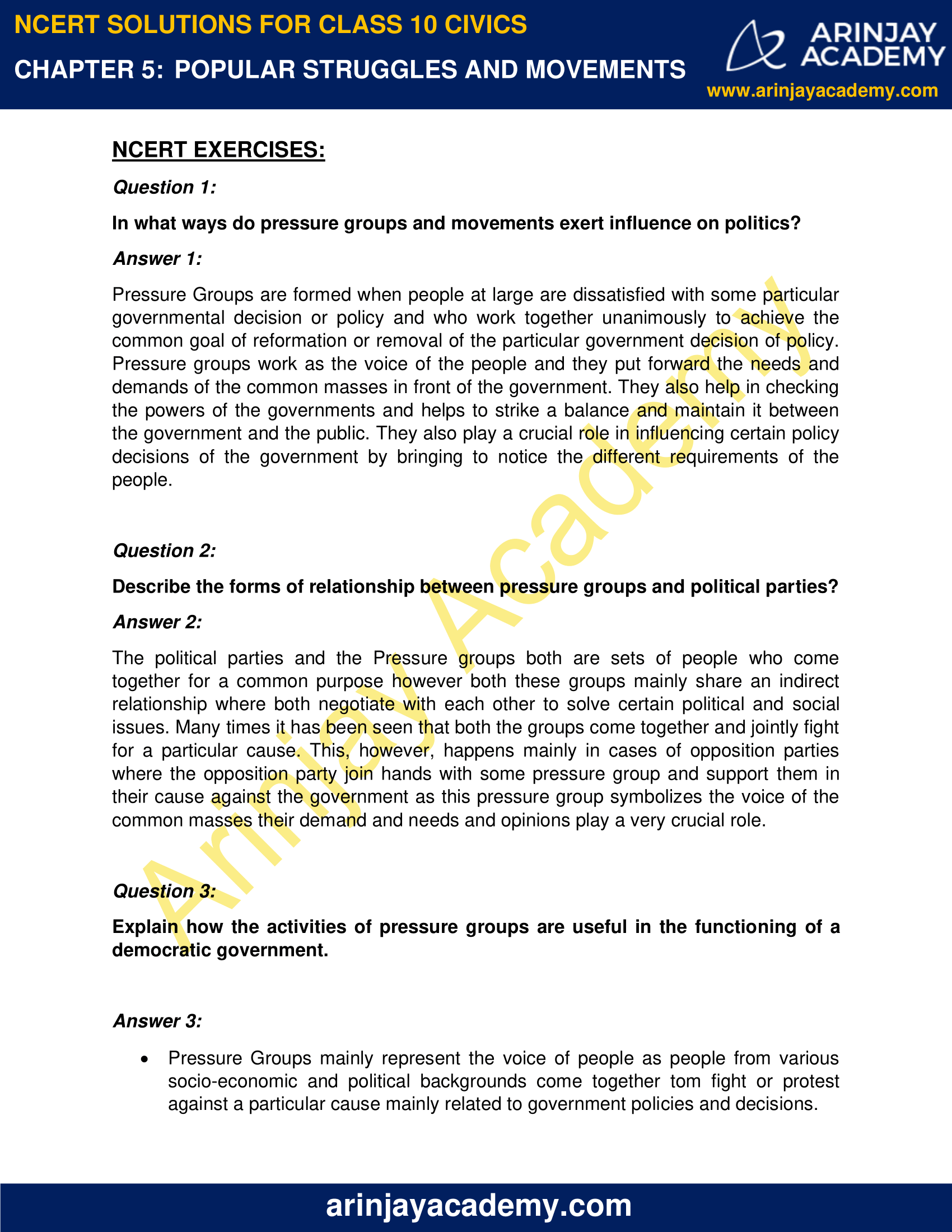 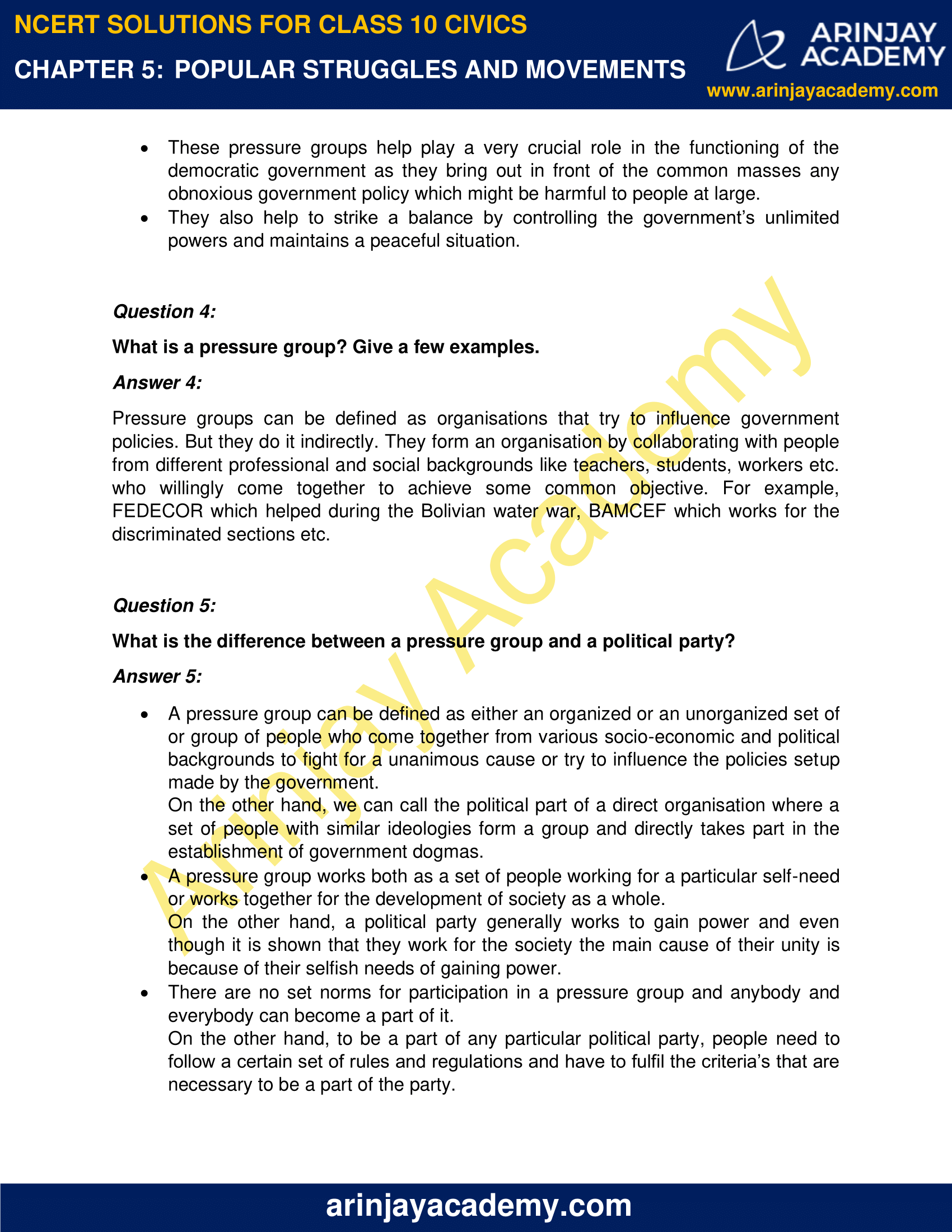 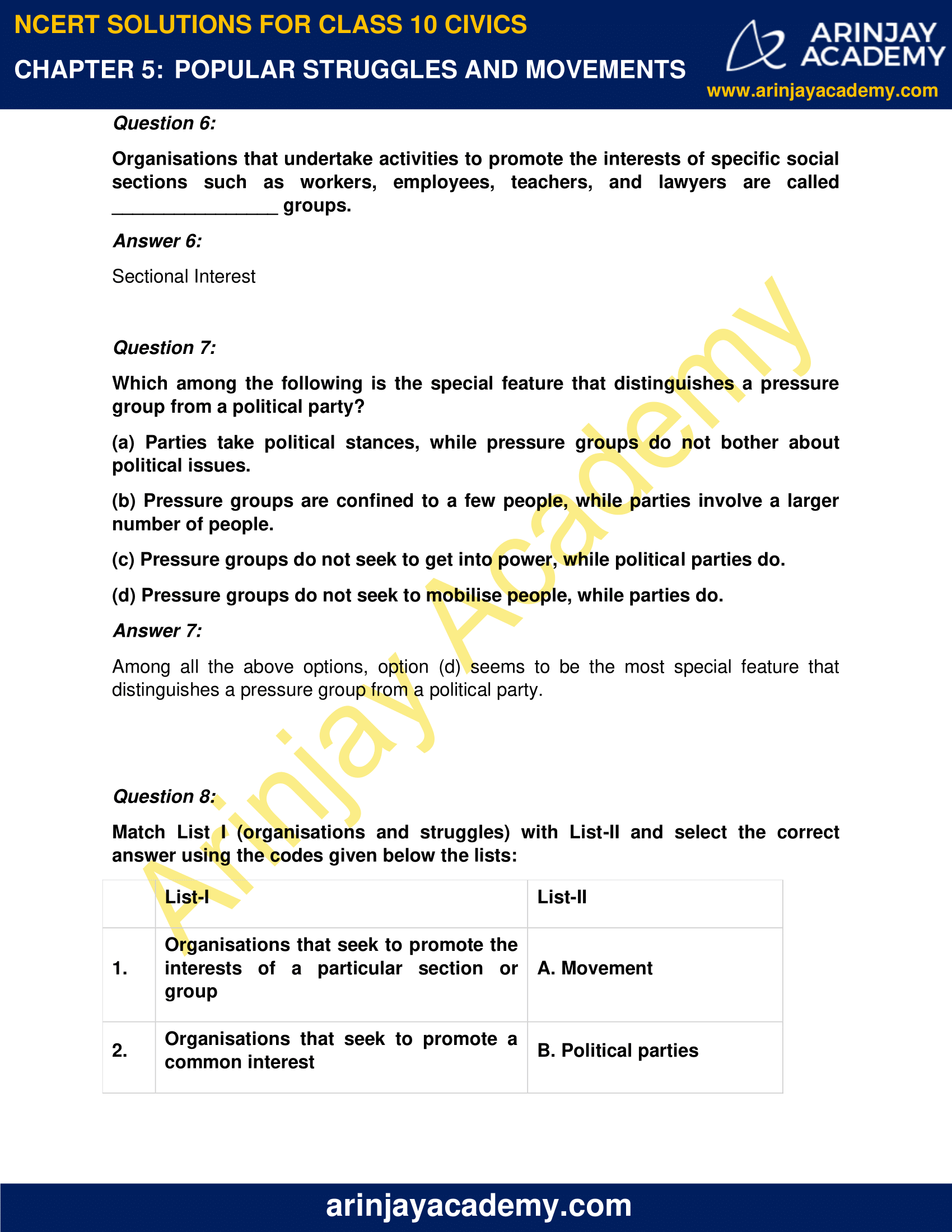 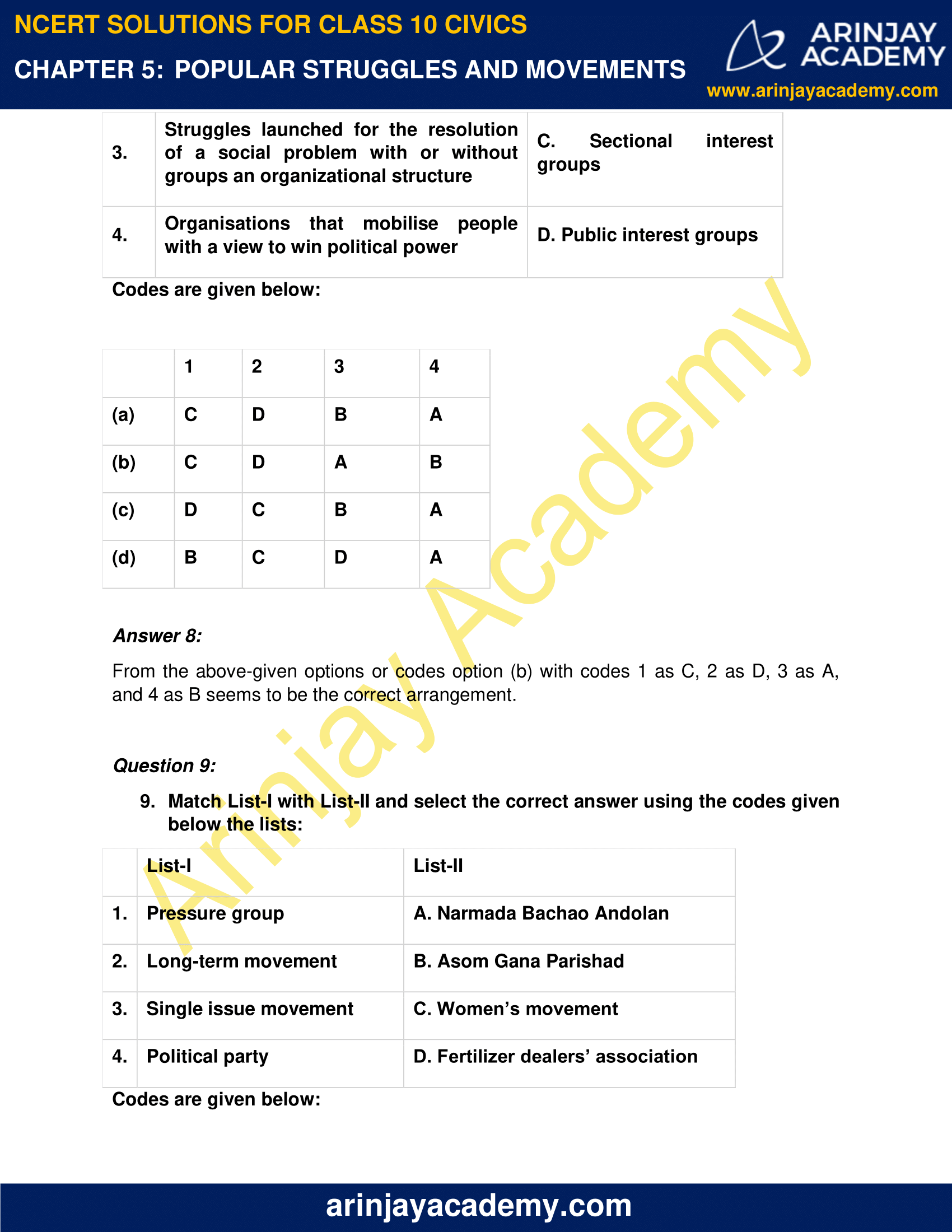 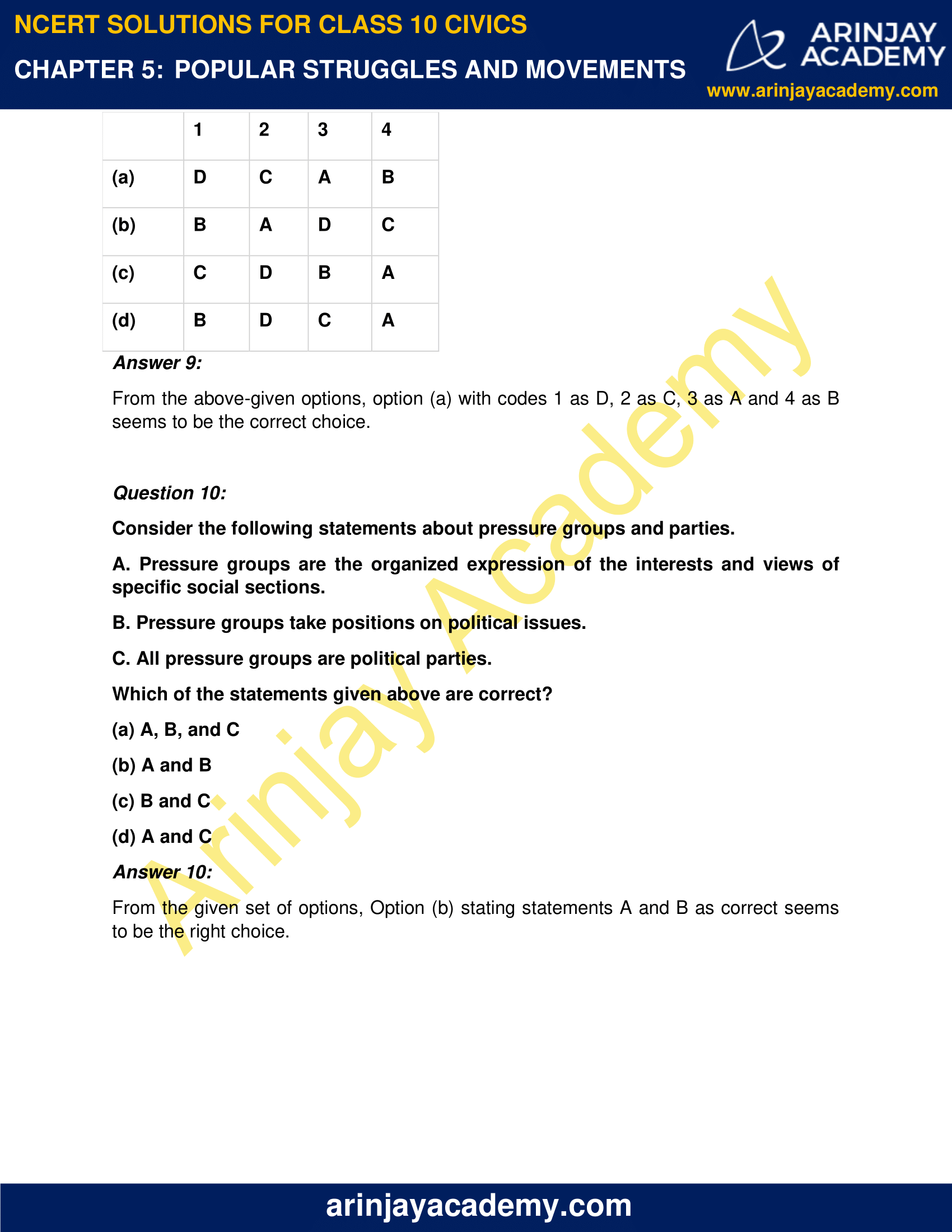 In what ways do pressure groups and movements exert influence on politics?

Describe the forms of relationship between pressure groups and political parties?

The political parties and the Pressure groups both are sets of people who come together for a common purpose however both these groups mainly share an indirect relationship where both negotiate with each other to solve certain political and social issues. Many times it has been seen that both the groups come together and jointly fight for a particular cause. This, however, happens mainly in cases of opposition parties where the opposition party join hands with some pressure group and support them in their cause against the government as this pressure group symbolizes the voice of the common masses their demand and needs and opinions play a very crucial role.

Explain how the activities of pressure groups are useful in the functioning of a democratic government.

What is a pressure group? Give a few examples.

Pressure groups can be defined as organisations that try to influence government policies. But they do it indirectly. They form an organisation by collaborating with people from different professional and social backgrounds like teachers, students, workers etc. who willingly come together to achieve some common objective. For example, FEDECOR which helped during the Bolivian water war, BAMCEF which works for the discriminated sections etc.

What is the difference between a pressure group and a political party?

Organisations that undertake activities to promote the interests of specific social sections such as workers, employees, teachers, and lawyers are called _______ groups.

Which among the following is the special feature that distinguishes a pressure group from a political party?

(a) Parties take political stances, while pressure groups do not bother about political issues.

(b) Pressure groups are confined to a few people, while parties involve a larger number of people.

(c) Pressure groups do not seek to get into power, while political parties do.

(d) Pressure groups do not seek to mobilise people, while parties do.

Among all the above options, option (d) seems to be the most special feature that distinguishes a pressure group from a political party.

Match List I (organisations and struggles) with List-II and select the correct answer using the codes given below the lists: 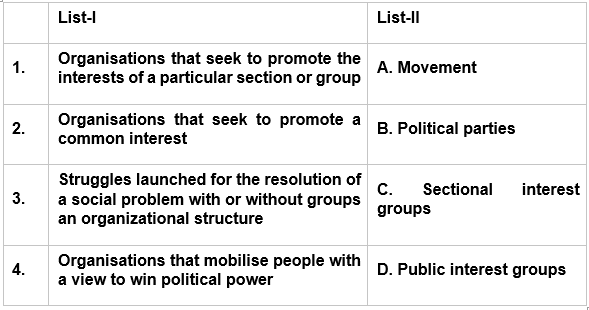 From the above-given options or codes option (b) with codes 1 as C, 2 as D, 3 as A, and 4 as B seems to be the correct arrangement.

Match List-I with List-II and select the correct answer using the codes given below the lists: 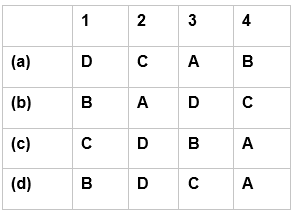 Consider the following statements about pressure groups and parties.

From the given set of options, Option (b) stating statements A and B as correct seems to be the right choice.

Alliance: An union or association formed for mutual benefit, especially between countries or organizations.

Curfew: A guideline according to which people are required to remain indoors between specified hours owing to a variety of reasons like political turmoil, war etc.