NCERT Solutions for Class 10 Civics Chapter 2 – Federalism (Social Science), contains solutions to various questions in Exercise for Chapter 2.  At the end of the Solutions, all the keywords which are important to understand Chapter 2 Federalism Class 10 Civics, have been explained in a simple and easy to understand manner. We are providing NCERT Solutions for Class 10 all subjects which can be accessed by clicking here. 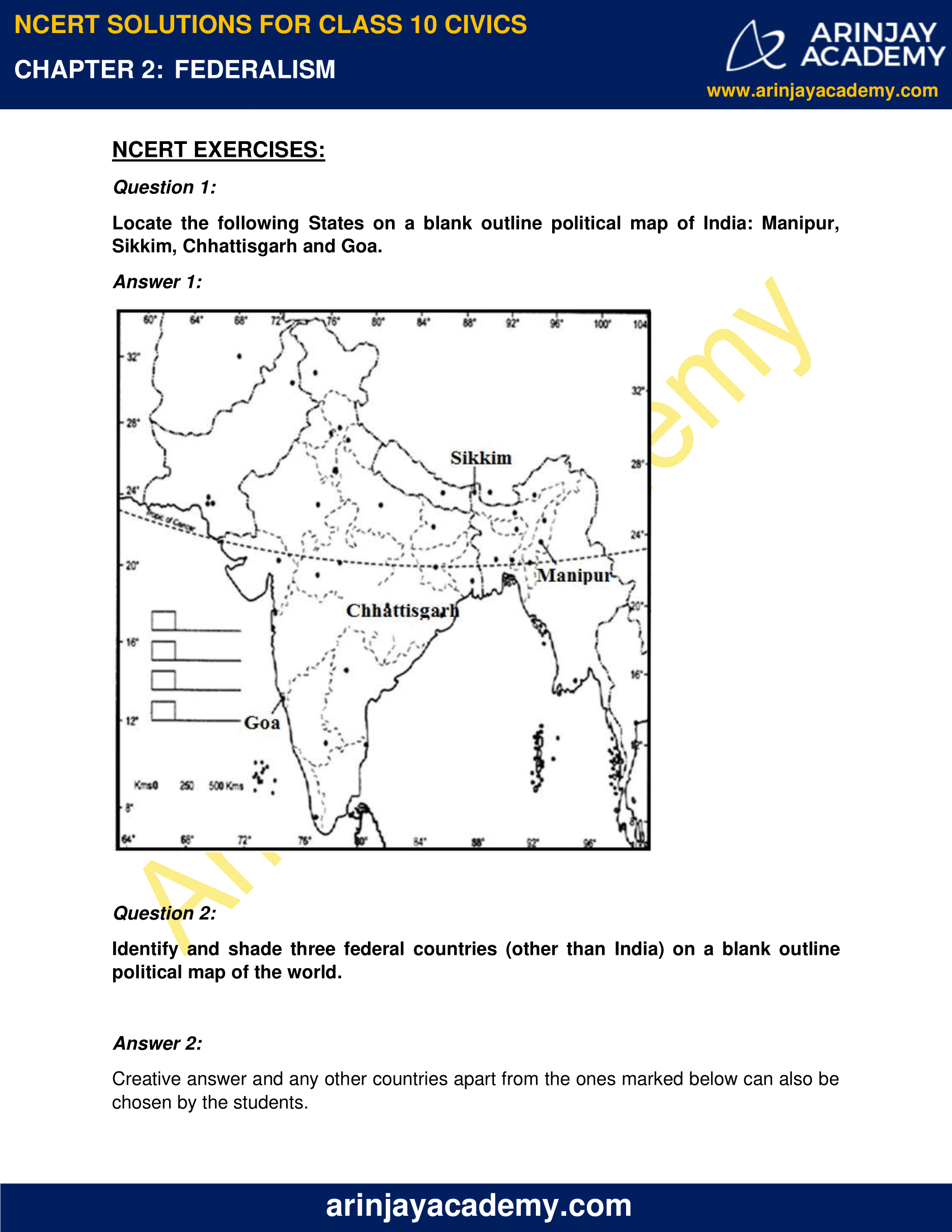 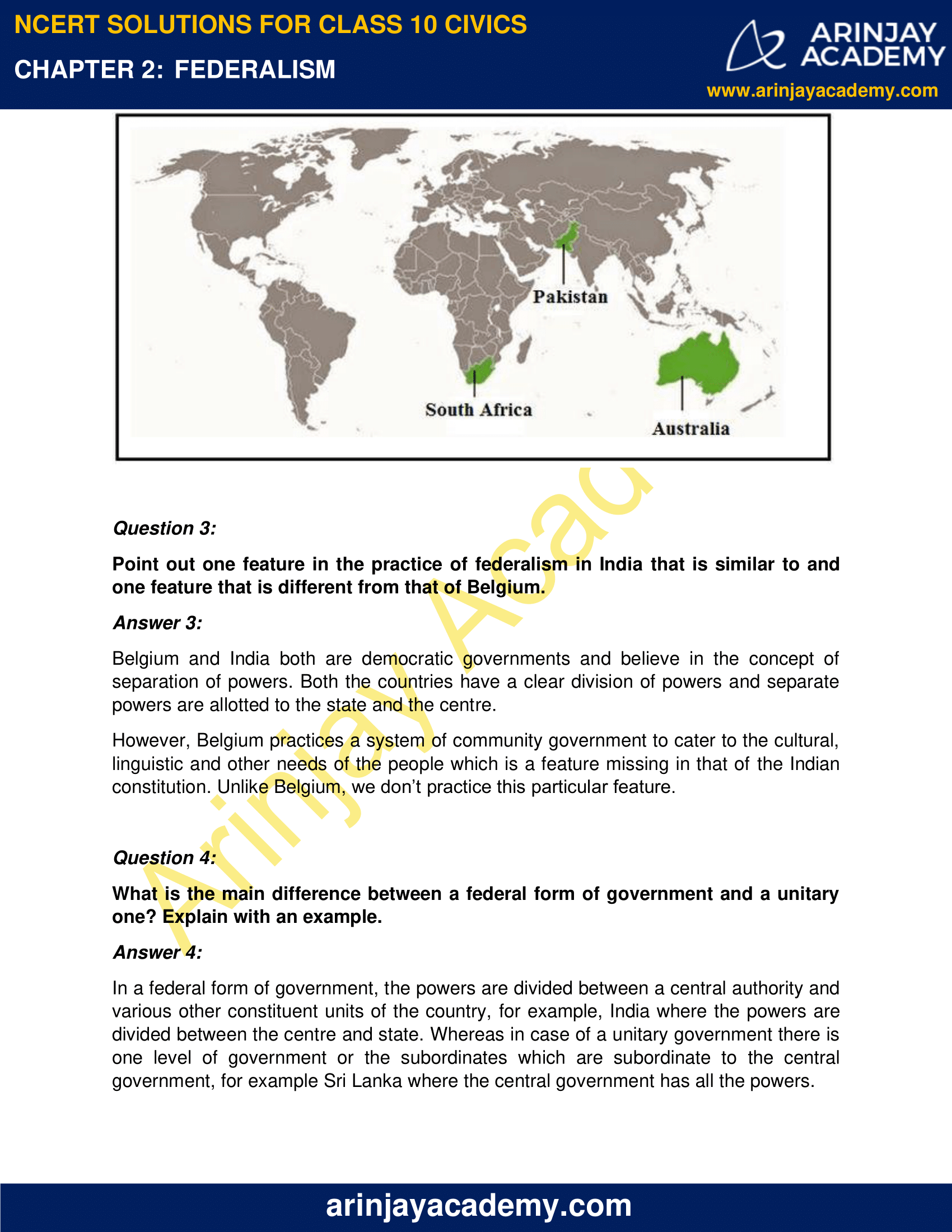 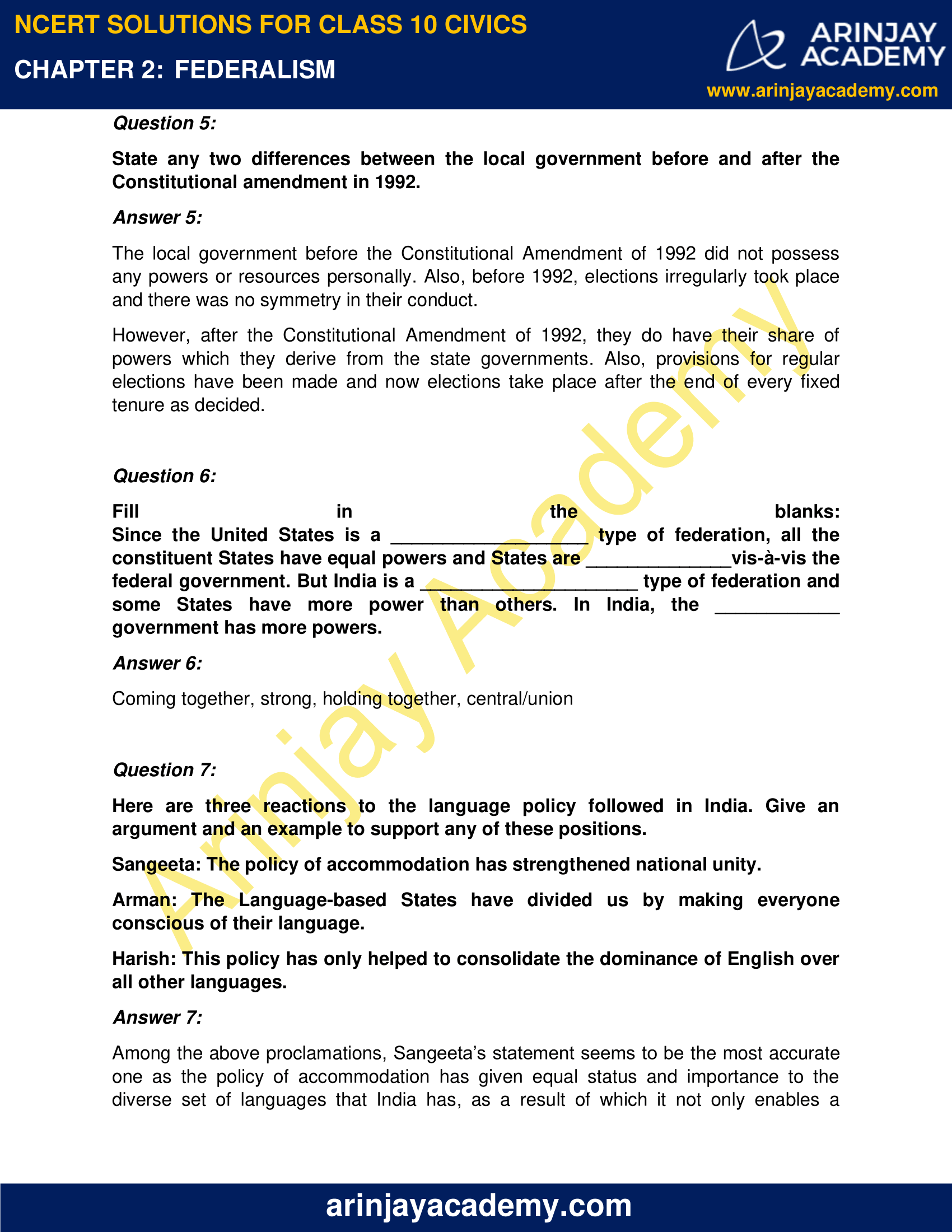 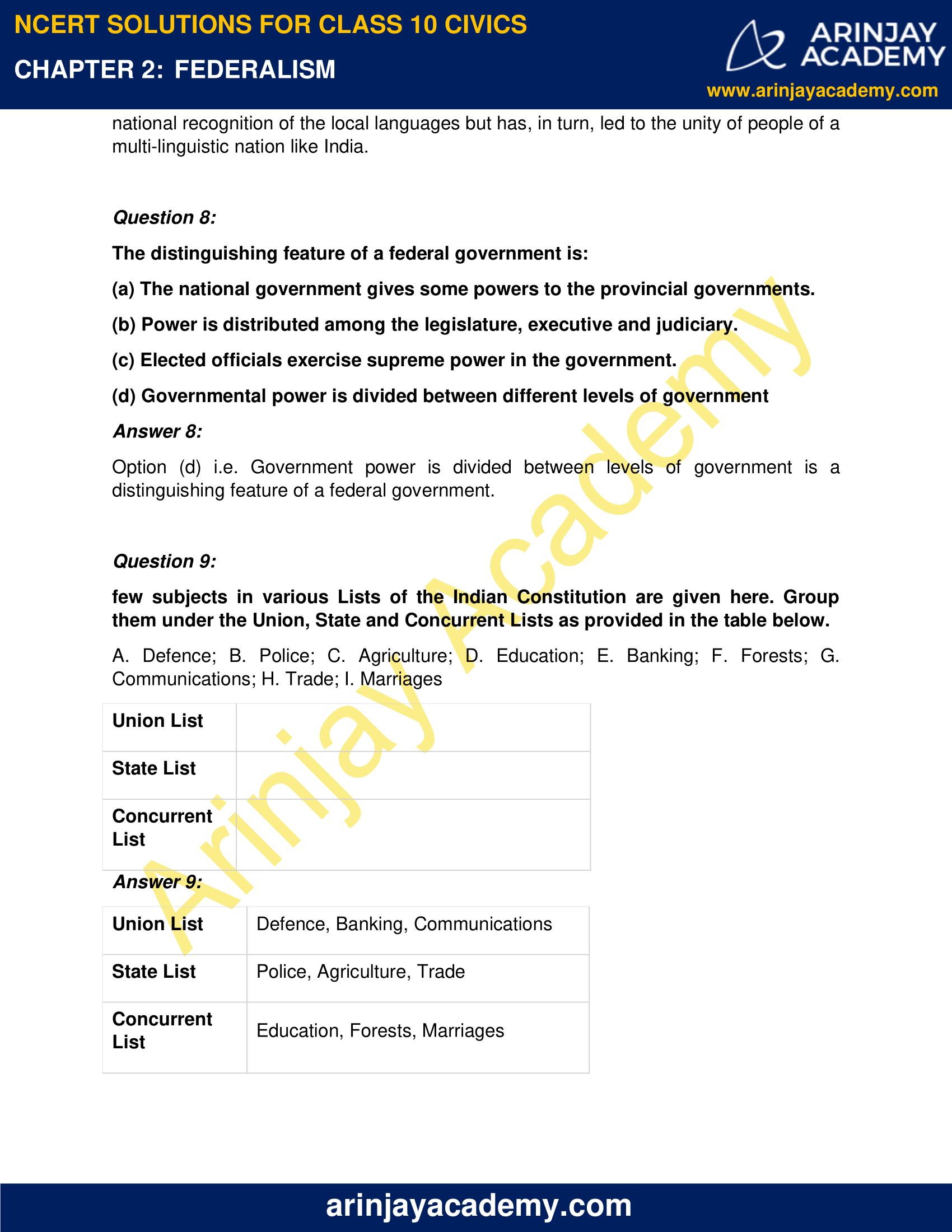 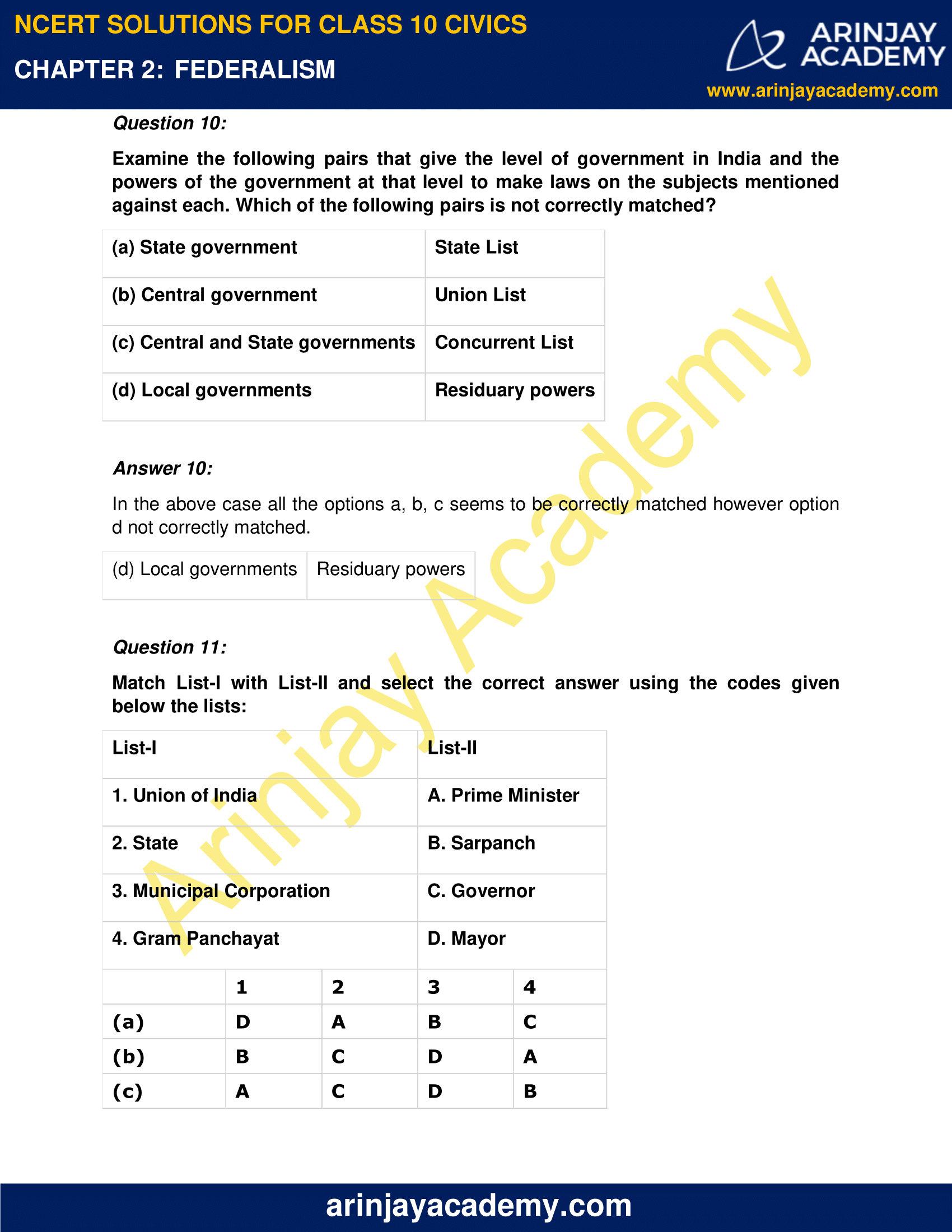 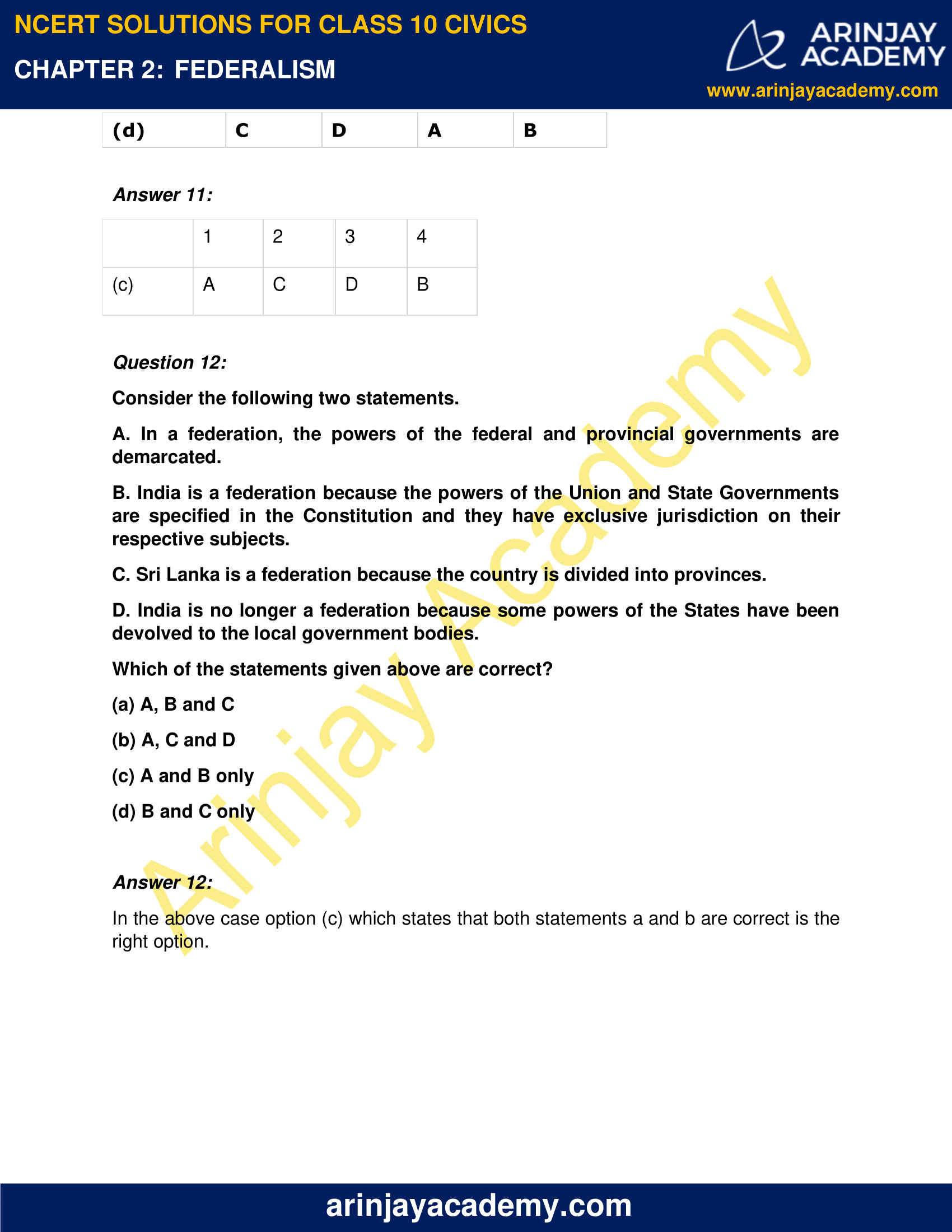 NCERT Solutions for Class 10 Civics Chapter 2 – Federalism Exercises includes Question/Answers which helps you to understand the topic covered in Federalism Class 10 Civics (Social Science), in a better manner to help you to score good marks in your examinations.

Identify and shade three federal countries (other than India) on a blank outline political map of the world.

Creative answer and any other countries apart from the ones marked below can also be chosen by the students.

Point out one feature in the practice of federalism in India that is similar to and one feature that is different from that of Belgium.

Belgium and India both are democratic governments and believe in the concept of separation of powers. Both the countries have a clear division of powers and separate powers are allotted to the state and the centre.

However, Belgium practices a system of community government to cater to the cultural, linguistic and other needs of the people which is a feature missing in that of the Indian constitution. Unlike Belgium, we don’t practice this particular feature.

What is the main difference between a federal form of government and a unitary one? Explain with an example.

State any two differences between the local government before and after the Constitutional amendment in 1992.

The local government before the Constitutional Amendment of 1992 did not possess any powers or resources personally. Also, before 1992, elections irregularly took place and there was no symmetry in their conduct.

However, after the Constitutional Amendment of 1992, they do have their share of powers which they derive from the state governments. Also, provisions for regular elections have been made and now elections take place after the end of every fixed tenure as decided.

Here are three reactions to the language policy followed in India. Give an argument and an example to support any of these positions.

Sangeeta: The policy of accommodation has strengthened national unity.

Arman: The Language-based States have divided us by making everyone conscious of their language.

Harish: This policy has only helped to consolidate the dominance of English over all other languages.

Among the above proclamations, Sangeeta’s statement seems to be the most accurate one as the policy of accommodation has given equal status and importance to the diverse set of languages that India has, as a result of which it not only enables a national recognition of the local languages but has, in turn, led to the unity of people of a multi-linguistic nation like India.

The distinguishing feature of a federal government is:

(b) Power is distributed among the legislature, executive and judiciary.

(d) Governmental power is divided between different levels of government

Option (d) i.e. Government power is divided between levels of government is a distinguishing feature of a federal government.

few subjects in various Lists of the Indian Constitution are given here. Group them under the Union, State and Concurrent Lists as provided in the table below.

Match List-I with List-II and select the correct answer using the codes given below the lists: 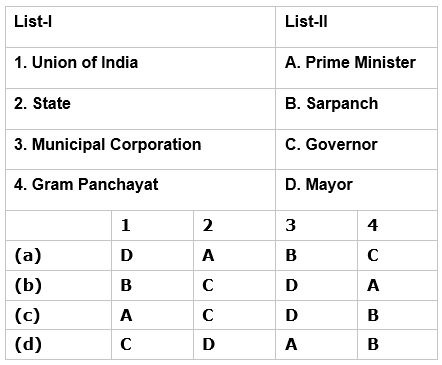 A. In a federation, the powers of the federal and provincial governments are demarcated.

B. India is a federation because the powers of the Union and State Governments are specified in the Constitution and they have exclusive jurisdiction on their respective subjects.

C. Sri Lanka is a federation because the country is divided into provinces.

D. India is no longer a federation because some powers of the States have been devolved to the local government bodies.

In the above case option (c) which states that both statements a and b are correct is the right option.

Jurisdiction: The official power or authority to make legal decisions.

Federal: When powers are distributed among several states and are not concentrated only with the centre then it can be termed as federal.

Panchayat Samiti: When a few gram panchayats which are mainly the decision-making body of the village are clubbed together then it is known as a panchayat Samiti.