NCERT Solutions for Class 10 Civics Chapter 3 – Democracy and Diversity (Social Science), contains solutions to various questions in Exercise for Chapter 3.  At the end of the Solutions, all the keywords which are important to understand Chapter 3 Democracy and Diversity Class 10 Civics, have been explained in a simple and easy to understand manner. We are providing NCERT Solutions for Class 10 all subjects which can be accessed by clicking here. 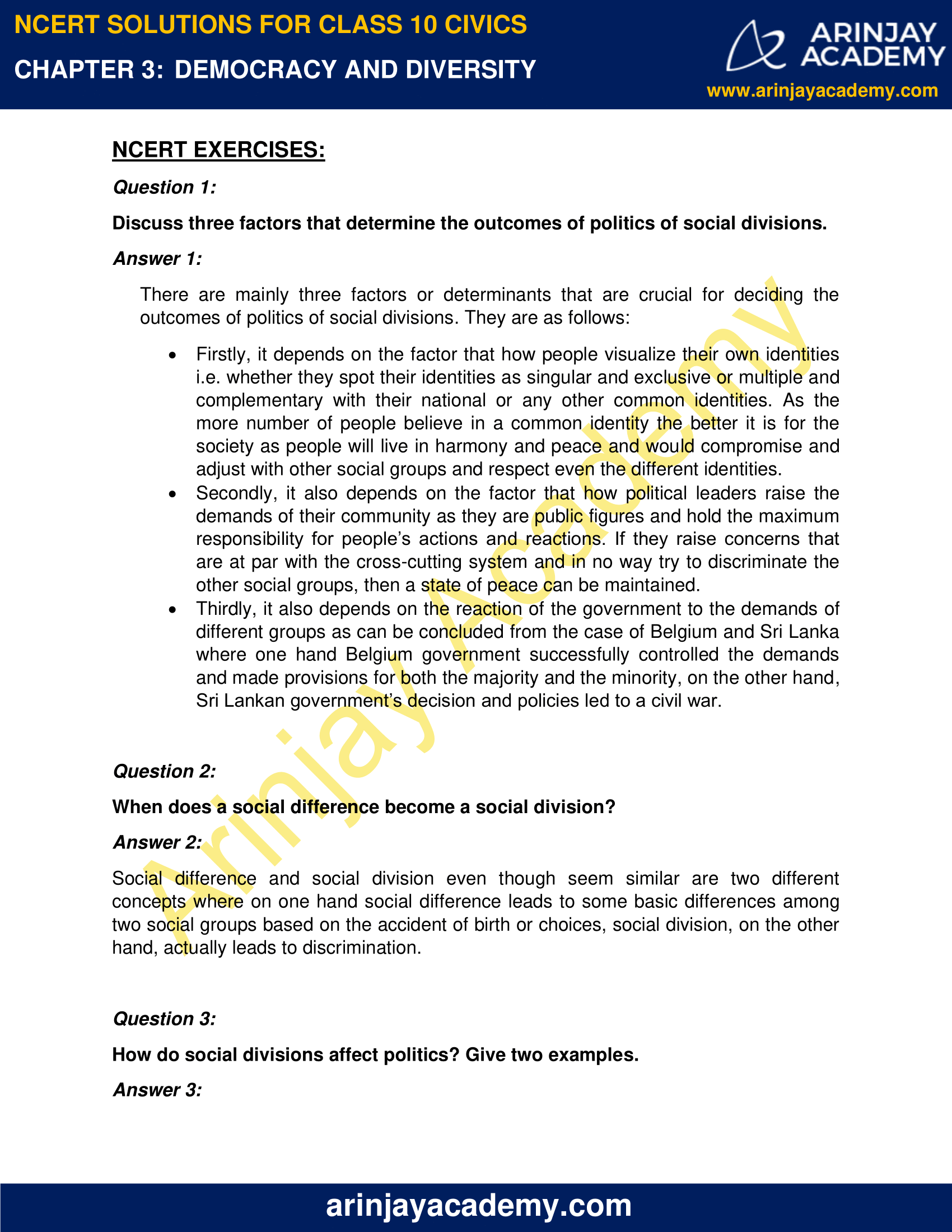 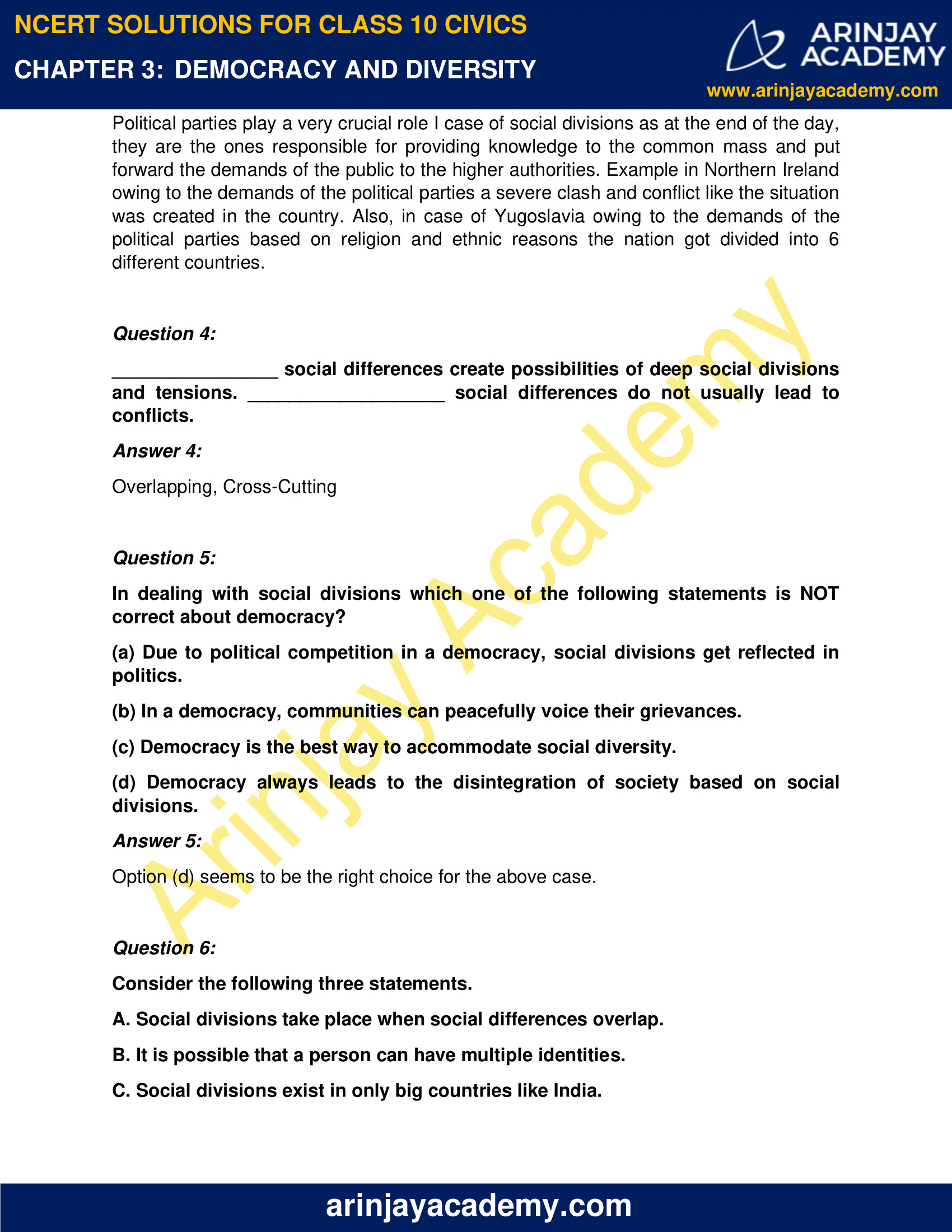 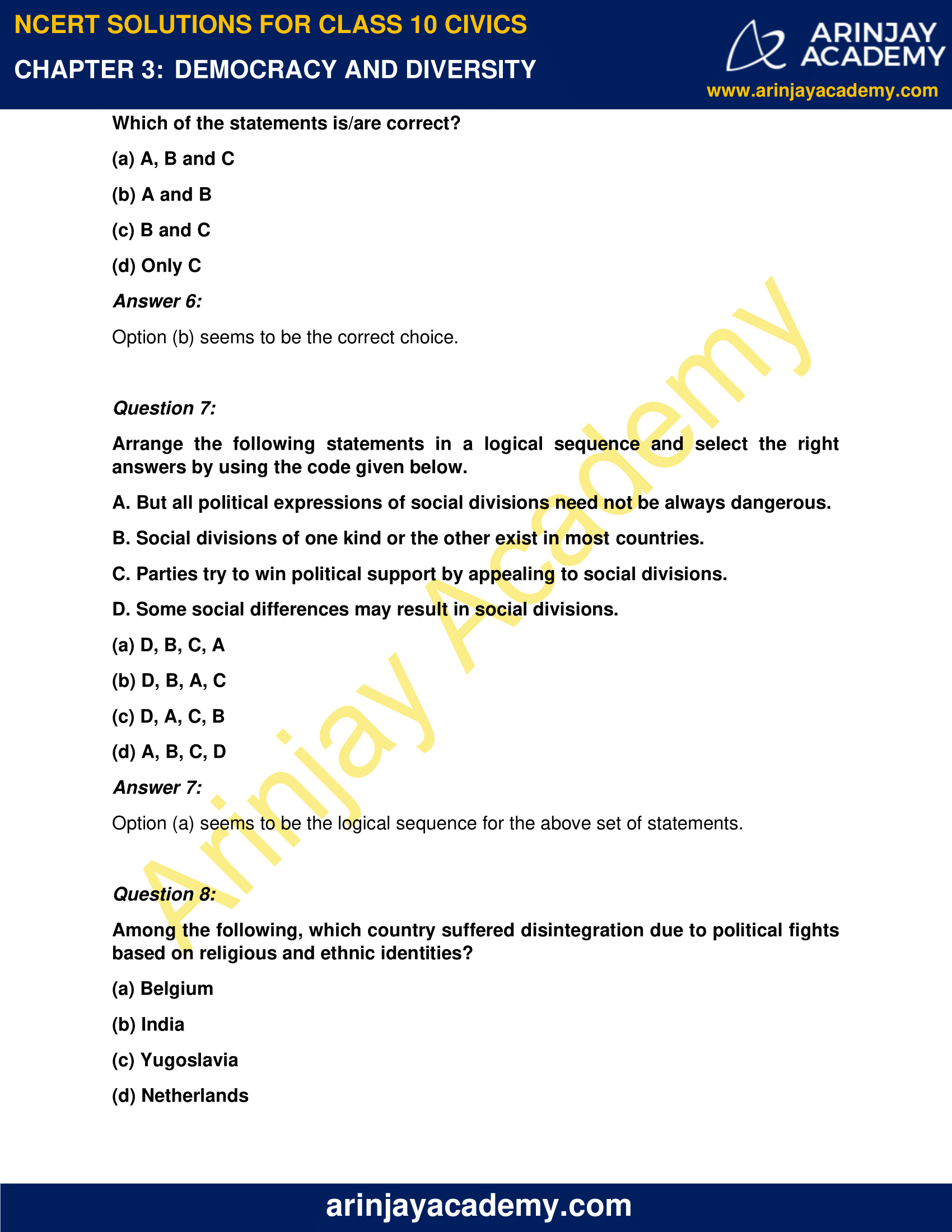 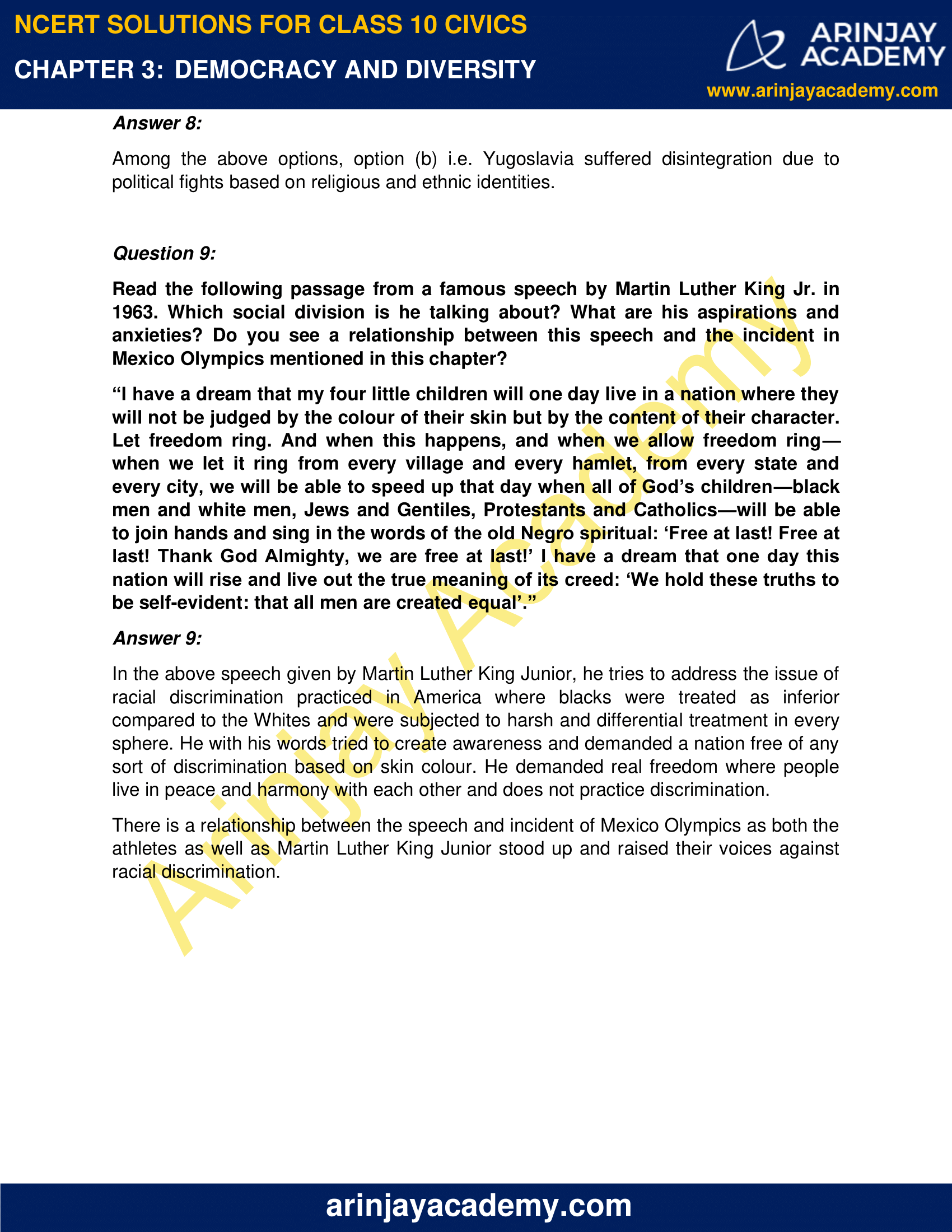 Discuss three factors that determine the outcomes of politics of social divisions.

There are mainly three factors or determinants that are crucial for deciding the outcomes of politics of social divisions. They are as follows:

How do social divisions affect politics? Give two examples.

In dealing with social divisions which one of the following statements is NOT correct about democracy?

(a) Due to political competition in a democracy, social divisions get reflected in politics.

(b) In a democracy, communities can peacefully voice their grievances.

(c) Democracy is the best way to accommodate social diversity.

(d) Democracy always leads to the disintegration of society based on social divisions.

Option (d) seems to be the right choice for the above case.

B. It is possible that a person can have multiple identities.

C. Social divisions exist in only big countries like India.

Which of the statements is/are correct?

Option (b) seems to be the correct choice.

Arrange the following statements in a logical sequence and select the right answers by using the code given below.

A. But all political expressions of social divisions need not be always dangerous.

B. Social divisions of one kind or the other exist in most countries.

D. Some social differences may result in social divisions.

Option (a) seems to be the logical sequence for the above set of statements.

Among the following, which country suffered disintegration due to political fights based on religious and ethnic identities?

Among the above options, option (b) i.e. Yugoslavia suffered disintegration due to political fights based on religious and ethnic identities.

Read the following passage from a famous speech by Martin Luther King Jr. in 1963. Which social division is he talking about? What are his aspirations and anxieties? Do you see a relationship between this speech and the incident in Mexico Olympics mentioned in this chapter?

“I have a dream that my four little children will one day live in a nation where they will not be judged by the colour of their skin but by the content of their character. Let freedom ring. And when this happens, and when we allow freedom ring—when we let it ring from every village and every hamlet, from every state and every city, we will be able to speed up that day when all of God’s children—black men and white men, Jews and Gentiles, Protestants and Catholics—will be able to join hands and sing in the words of the old Negro spiritual: ‘Free at last! Free at last! Thank God Almighty, we are free at last!’ I have a dream that one day this nation will rise and live out the true meaning of its creed: ‘We hold these truths to be self-evident: that all men are created equal’.”

In the above speech given by Martin Luther King Junior, he tries to address the issue of racial discrimination practiced in America where blacks were treated as inferior compared to the Whites and were subjected to harsh and differential treatment in every sphere. He with his words tried to create awareness and demanded a nation free of any sort of discrimination based on skin colour. He demanded real freedom where people live in peace and harmony with each other and does not practice discrimination.

There is a relationship between the speech and incident of Mexico Olympics as both the athletes as well as Martin Luther King Junior stood up and raised their voices against racial discrimination.

African Americans: The term mainly refers to the group of people whose ancestors were mainly brought as slaves from Africa to America during the seventh and eighteenth centuries.

Migrant: Migration is a process where a person travels from one place to another for some particular purpose and carries with himself his native culture, language etc. This person who performs migration is known as a Migrant.

Racial Discrimination: When a particular group of people are treated as inferior compared to others owing to their colour of skin then it is termed as racial discrimination.