NCERT Solutions for Class 10 Civics Chapter 1 – Power Sharing (Social Science), contains solutions to various questions in Exercise for Chapter 1.  At the end of the Solutions, all the keywords which are important to understand Chapter 1 Power Sharing Class 10 Civics, have been explained in a simple and easy to understand manner. We are providing NCERT Solutions for Class 10 all subjects which can be accessed by clicking here. 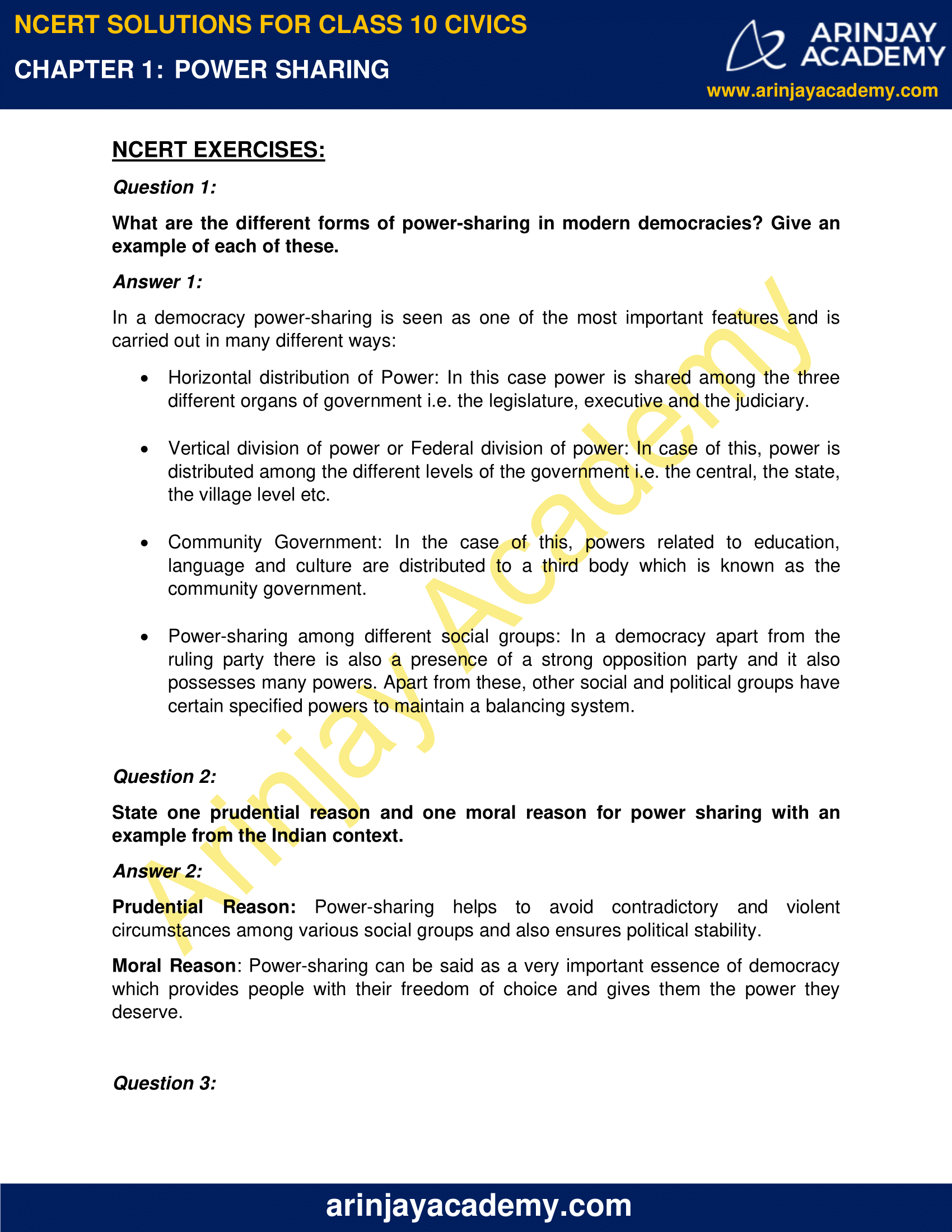 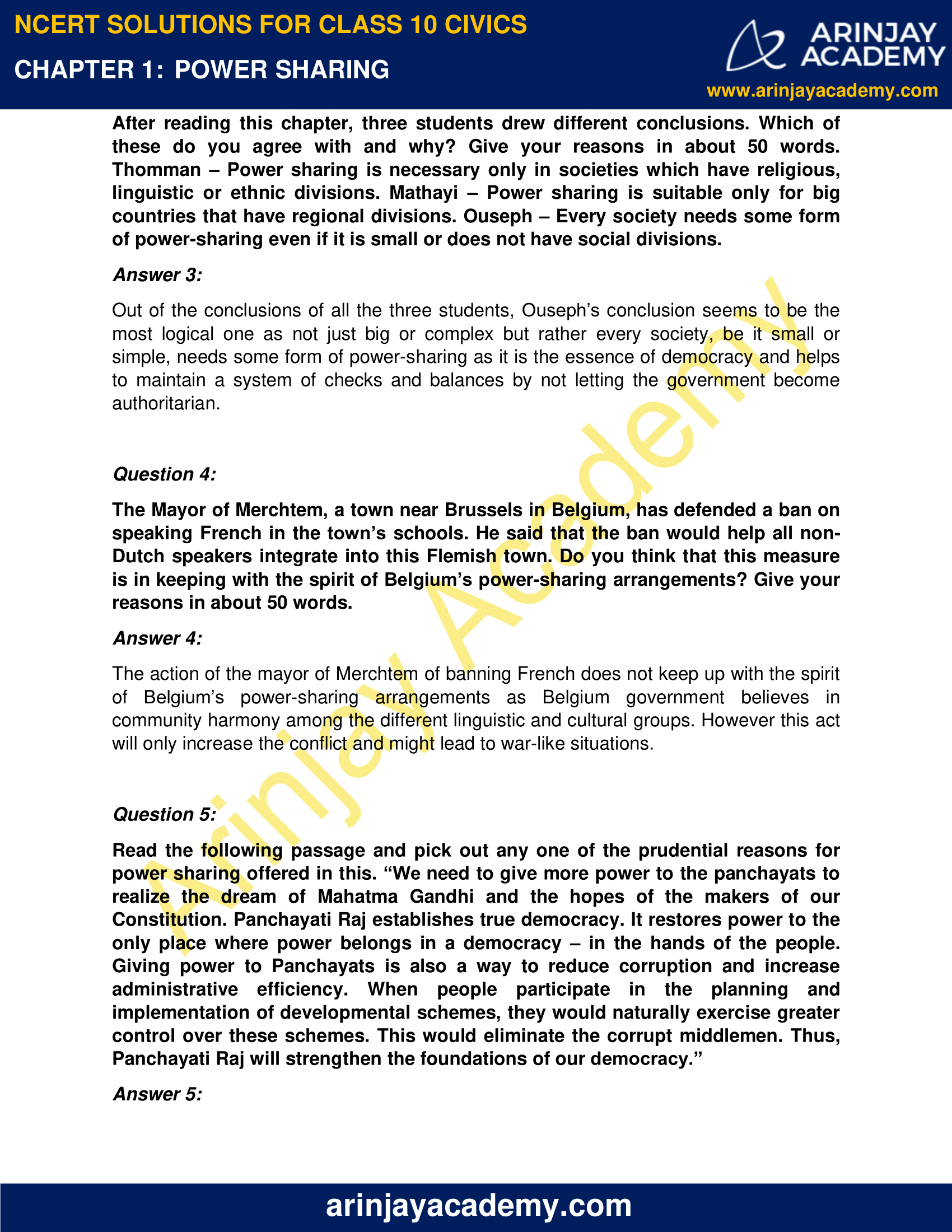 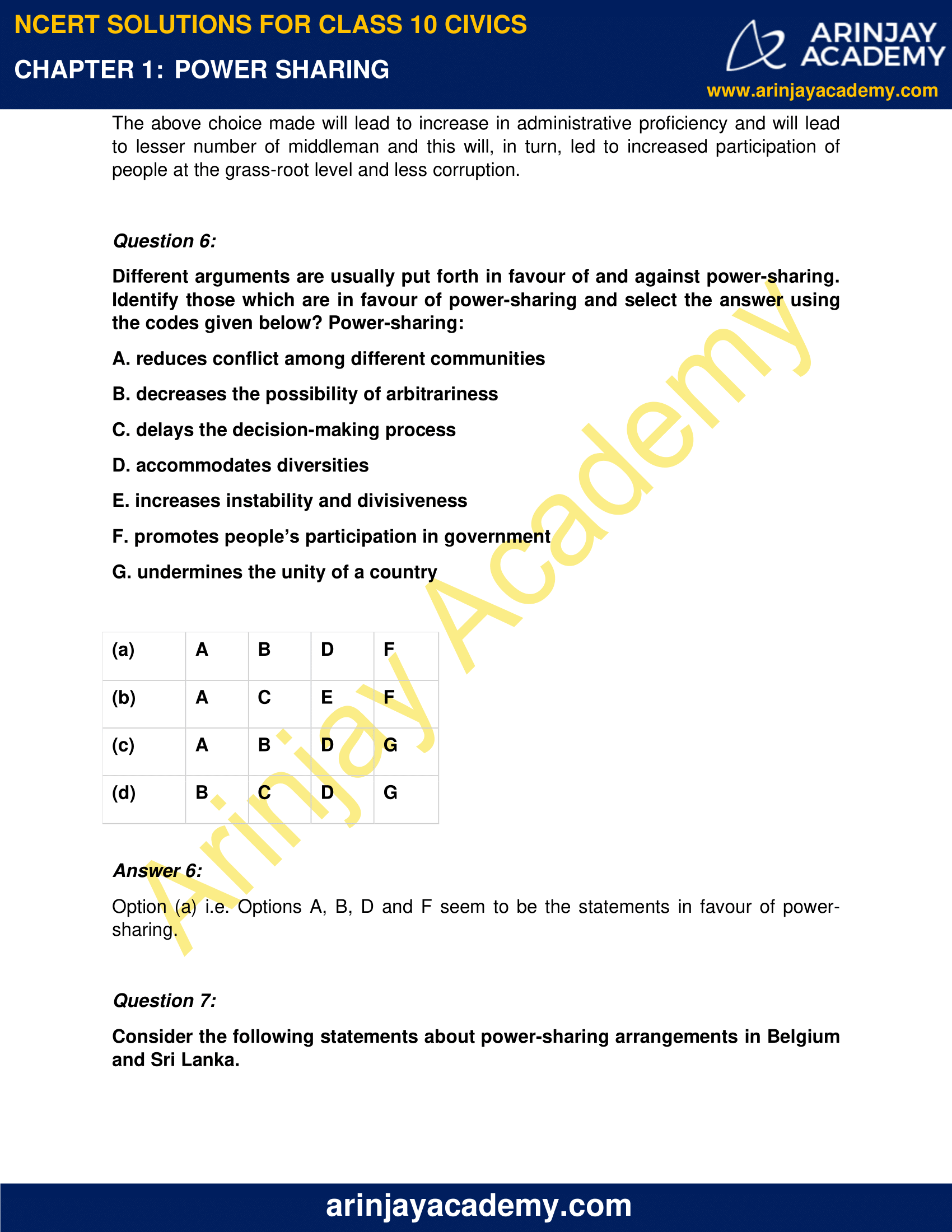 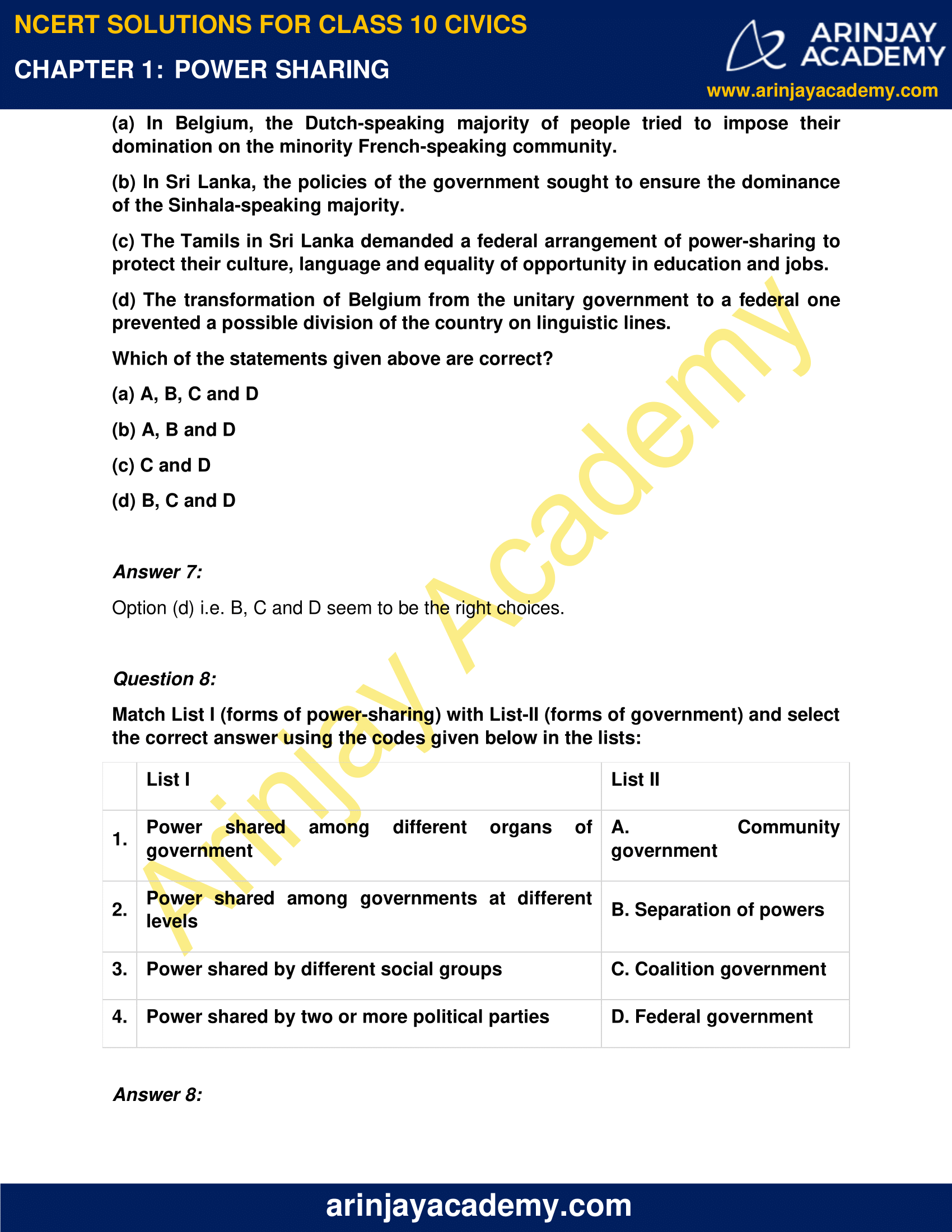 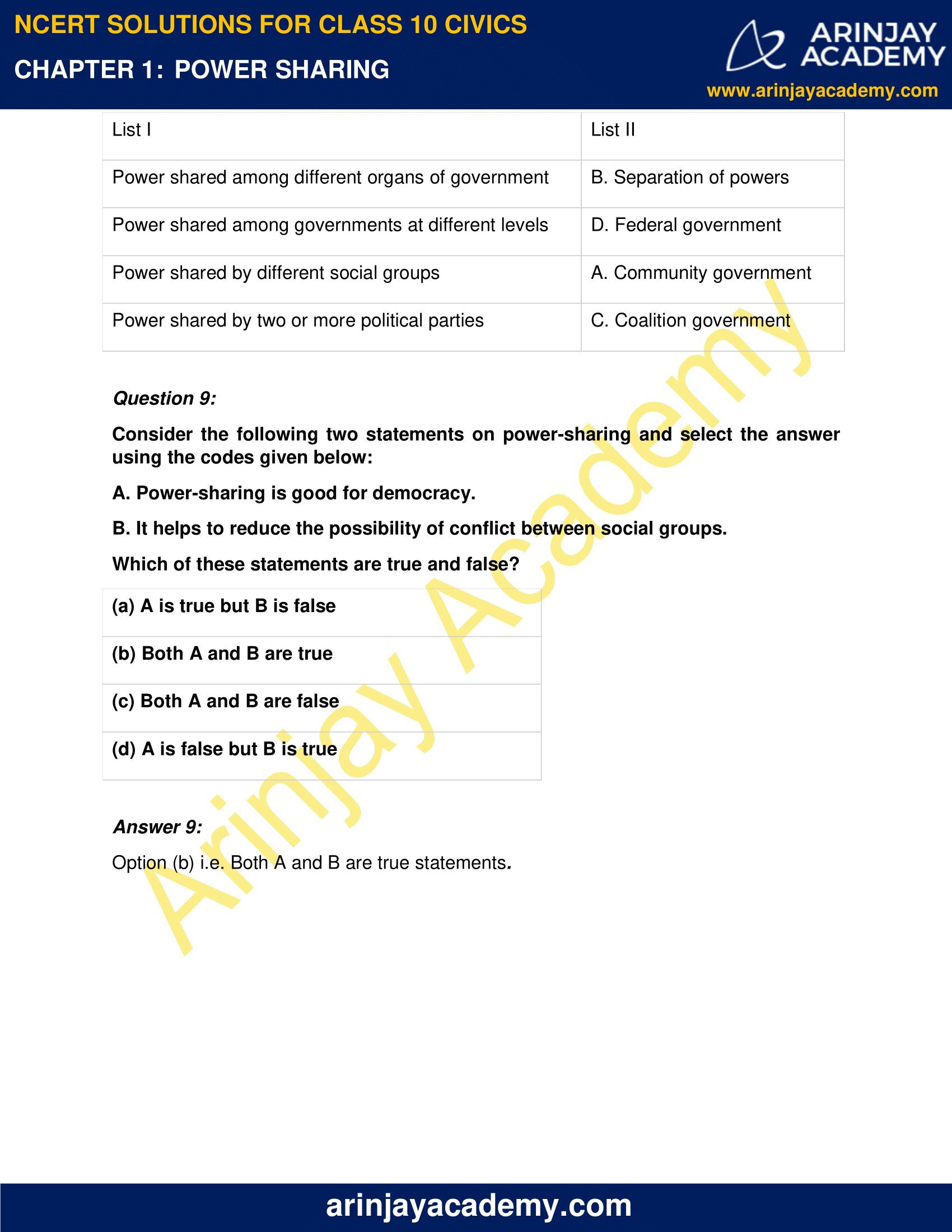 What are the different forms of power-sharing in modern democracies? Give an example of each of these.

In a democracy power-sharing is seen as one of the most important features and is carried out in many different ways:

State one prudential reason and one moral reason for power sharing with an example from the Indian context.

Moral Reason: Power-sharing can be said as a very important essence of democracy which provides people with their freedom of choice and gives them the power they deserve.

After reading this chapter, three students drew different conclusions. Which of these do you agree with and why? Give your reasons in about 50 words. Thomman – Power sharing is necessary only in societies which have religious, linguistic or ethnic divisions. Mathayi – Power sharing is suitable only for big countries that have regional divisions. Ouseph – Every society needs some form of power-sharing even if it is small or does not have social divisions.

Out of the conclusions of all the three students, Ouseph’s conclusion seems to be the most logical one as not just big or complex but rather every society, be it small or simple, needs some form of power-sharing as it is the essence of democracy and helps to maintain a system of checks and balances by not letting the government become authoritarian.

The Mayor of Merchtem, a town near Brussels in Belgium, has defended a ban on speaking French in the town’s schools. He said that the ban would help all non-Dutch speakers integrate into this Flemish town. Do you think that this measure is in keeping with the spirit of Belgium’s power-sharing arrangements? Give your reasons in about 50 words.

The action of the mayor of Merchtem of banning French does not keep up with the spirit of Belgium’s power-sharing arrangements as Belgium government believes in community harmony among the different linguistic and cultural groups. However this act will only increase the conflict and might lead to war-like situations.

Read the following passage and pick out any one of the prudential reasons for power sharing offered in this. “We need to give more power to the panchayats to realize the dream of Mahatma Gandhi and the hopes of the makers of our Constitution. Panchayati Raj establishes true democracy. It restores power to the only place where power belongs in a democracy – in the hands of the people. Giving power to Panchayats is also a way to reduce corruption and increase administrative efficiency. When people participate in the planning and implementation of developmental schemes, they would naturally exercise greater control over these schemes. This would eliminate the corrupt middlemen. Thus, Panchayati Raj will strengthen the foundations of our democracy.”

The above choice made will lead to increase in administrative proficiency and will lead to lesser number of middleman and this will, in turn, led to increased participation of people at the grass-root level and less corruption. 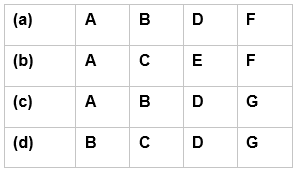 Option (a) i.e. Options A, B, D and F seem to be the statements in favour of power-sharing.

Consider the following statements about power-sharing arrangements in Belgium and Sri Lanka.

(a) In Belgium, the Dutch-speaking majority of people tried to impose their domination on the minority French-speaking community.

(b) In Sri Lanka, the policies of the government sought to ensure the dominance of the Sinhala-speaking majority.

(c) The Tamils in Sri Lanka demanded a federal arrangement of power-sharing to protect their culture, language and equality of opportunity in education and jobs.

(d) The transformation of Belgium from the unitary government to a federal one prevented a possible division of the country on linguistic lines.

Match List I (forms of power-sharing) with List-II (forms of government) and select the correct answer using the codes given below in the lists:

Consider the following two statements on power-sharing and select the answer using the codes given below:

A. Power-sharing is good for democracy.
B. It helps to reduce the possibility of conflict between social groups.

Which of these statements are true and false?

Option (b) i.e. Both A and B are true statements.

Reserved Constituencies: When certain seats are reserved for the social and economically backward classes in any government-related activities like parliament etc. to provide them with equal opportunities is known as reserved constituencies.

Civil War: When there is a strenuous situation between two groups or communities of people in a country and the situation becomes so vigorous that it seems like an actual war.

Prudential: When decisions are taken based on moral reasons in a sensible manner then they can be termed as prudential.